New mobility data shows that Britons are flocking to parks to socialise in the scorching weather as lockdown restrictions are eased.

More Britons are socialising in parks and other public spaces now than across the whole of lockdown, new mobility data shows.

There has been an 136% increase in the amount of people gathering in parks when compared to a baseline figure from before lockdown, according to Google’s mobility data. 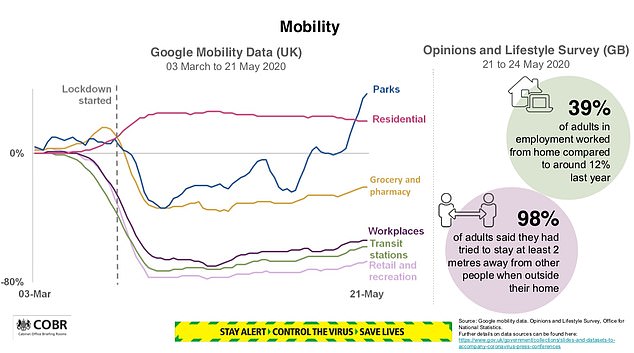 There has been an 136% increase of the amount of people socialising in parks this month, according to Google’s mobility data 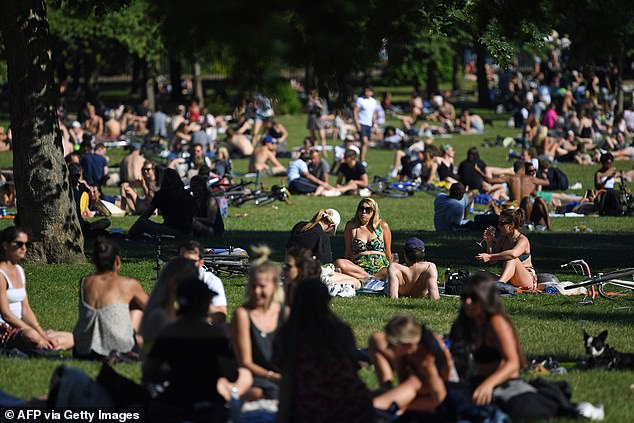 More Britons are socialising in parks and other public spaces now than across the whole of lockdown, the data shows. Pictured, people in Victoria Park in east London on May 30 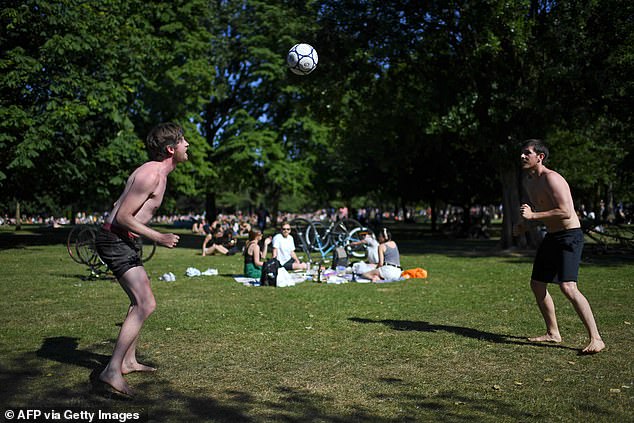 Police chiefs have attempted to stamp out mass flouting before the easing of lockdown measures by threatening to impose fines. Pictured, men playing with a football in Victoria Park, east London

This includes people gathering in other public spaces, including marinas, public beaches and public gardens.

This month has seen temperatures reaching almost 86F (30C) with only an average of 1.25in (31.8mm) of rain falling across the UK so far month, setting it up to be the driest May in 124 years.

Places of residence have also seen a 26% increase in mobility during lockdown, but most people are socialising in parks as scorching weather hits the UK this month.

This is when compared to a baseline figure over a five-week period from January 3 until February 6.

But there has been a huge decline in people visiting transport hubs, shops and workplaces since the Government imposed a nationwide lockdown on March 23.

This comes after Boris Johnson announced that from Monday, groups of up to six people will be allowed to meet in public spaces, including parks.

Britons will even be allowed to meet for barbecues under the new lockdown easing measures, meaning parks will remain one of the only spaces for safe gatherings.

An Apple mobility tracker has also shown a huge rise in the amount of travel since the beginning of lockdown. 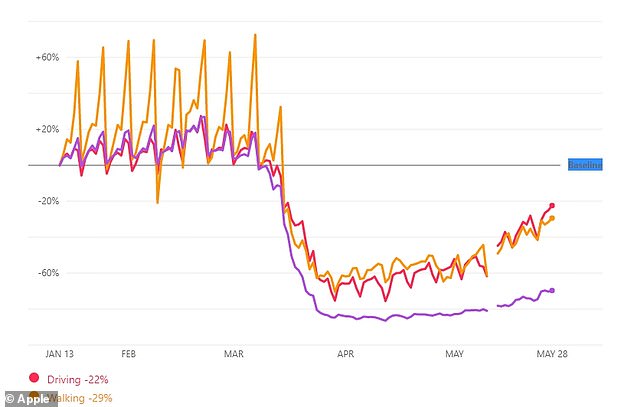 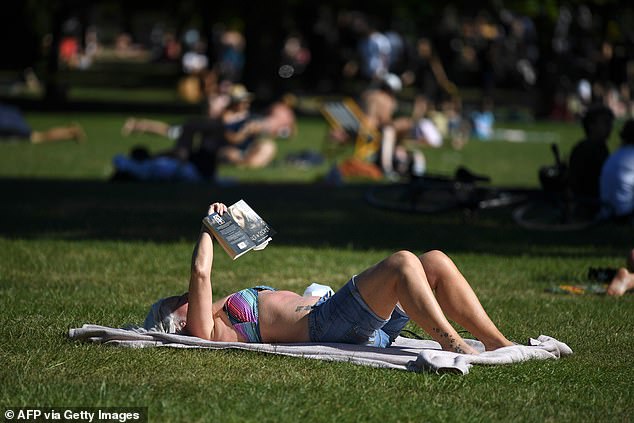 Masses of people are gathering in parks (pictured, Victoria Park, east London) after Boris Johnson announced that, from Monday, groups of up to six people will be allowed to meet in public spaces, including parks

But sun-seekers have been warned not to take advantage of the easing of lockdown, as Britons have been photographed out in masses this weekend. Pictured, people enjoy the warm weather on bikes in Fields park, London.

The figures remain around 20% below the baseline average, as Britons were urged to avoid public transport amid lockdown, but the number of people driving has hugely increased as lockdown easing measures are announced.

The number of people walking is still 29% below the baseline but has hugely increased across the last month, as Britons are given more freedom amid the coronavirus pandemic.

Restless Britons were photographed gathering in parks as the baking temperatures climbed to highs of 82F (28C).

Scorching temperatures hit highs of 81.5F (27.5C) in Kinlochewe in the Scottish Highlands, which basked in warmer weather than Morocco.

But sun-seekers have been warned not to take advantage of the gradual easing of lockdown, as Britons have been photographed out in masses this weekend. 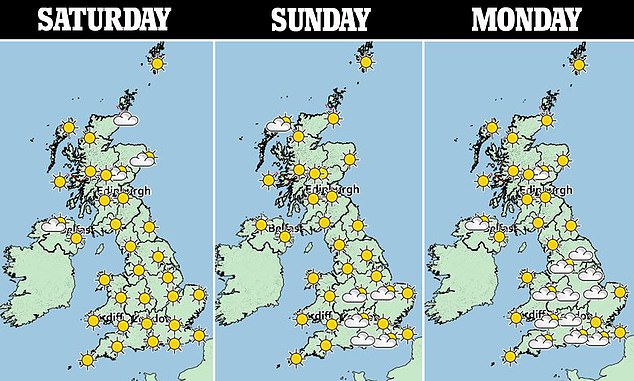 The current lockdown allows the public to travel to beauty spots to sunbathe with members of their household, or to meet one person from another household at a two-metre distance.

Police chiefs were braced for mass flouting and warned their officers faced an impossible situation of trying to force the public to comply with existing rules while knowing many of these curbs are set to be dropped on Monday.

Merseyside Police warned that people would be fined if they turned up to parks and beaches in large groups across the city.

Superintendent Jonathan Davies said: ‘I know people will be tempted to get outside. This is a reminder that the rules on spending time with only one other person from another household remains in place this weekend.’

The message from police to stick to the current rules was bolstered by the interventions from the Sage scientists, who were squeamish about the lockdown being lifted too fast.

Prof Horby, chairman of the New and Emerging Respiratory Virus Threats Advisory Group (NERVTAG) and a Sage member, said Britain could not afford to lose control of the virus.

He told BBC Radio 4 this morning: ‘We really can’t go back to a situation where we’ve got the numbers of cases and deaths we’ve had in the past.’