The boss of Melbourne’s suburban railway operator, Metro Trains, has said mandatory vaccinations should be considered for public transport workers, warning an increase in cases within the workforce running the city’s rail network is inevitable.

Following a COVID-19 outbreak in Victoria’s regional rail operator, V/Line, which has shut down the regional rail network for under two weeks, Metro chief executive Raymond O’Flaherty has warned that a similar outbreak could have easily happened at Metro. Two positive cases within V/Line have grown to seven since last Friday.

The outbreak prompted government warnings that tearooms have become a dangerous place within the rail and construction industries and a move to make vaccinations mandatory in the construction sector, prompting a violent protest outside the Melbourne office of construction union the CFMEU on Monday.

Mr O’Flaherty said he was encouraging all staff to get vaccinated unless they had an underlying medical issue and was “pushing that message pretty hard”, including working with the rail union to allay vaccination fears.

It was not the company’s current policy to mandate vaccinations — a rule that would be enforced in lockstep with government — but he believed the idea had merit and should be considered for all transport modes.

Vaccinations are mandatory for public transport workers in New York and all public-facing staff at Metro’s parent company, MTR, in Hong Kong. 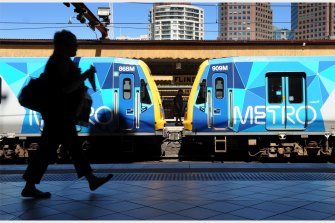 “We’re not mandating vaccination at the moment, that’s not our policy; it’s still one of encouragement. However, this space is moving really quickly. You can see the discussion around the construction sector. I think in the coming weeks this is going to evolve very quickly into other public sector areas like transport and other essential services,” Mr O’Flaherty said.

“My view is it’s going to have to be looked at. It already is in other public transport networks around the world.”

More than 80 per cent of staff indicated in a recent Metro survey that they received at least one vaccine dose or planned to get the jab.

Metro is considering options for how to deal with workers who do not get vaccinated, including rapid antigen testing before work and weekly COVID-19 tests.

“I don’t have the answers yet,” Mr O’Flaherty said.

The Rail, Tram and Bus Union’s Victorian secretary, Luba Grigorovitch, said the union was on a “unity ticket” with Metro in encouraging workers to get vaccinated.

But the union does not support a mandate, warning that would erode trust and not be effective. This matches the position taken by the CFMEU.

“We have found that the best approaches have given power, choice and opportunity to employees and ensure their vaccination experience can be a positive one,” Ms Grigorovitch said.

Premier Daniel Andrews announced on Sunday that vaccinations would be mandatory for sectors beyond aged care, construction, and freight. Healthcare is the next sector in which workers will have to be vaccinated to continue working.

Former deputy chief health officer Professor Allen Cheng said there were many ways industries could encourage people to get vaccinated without a mandate.

This could be done through education, requiring workers to report if they have been vaccinated and helping them make bookings or adjusting shift times to make it easier for them to get the jab, the infectious diseases expert and Australian Technical Advisory Group on Immunisation co-chair said.

“I think the important question for most industries is, ‘Are there other ways to achieve high vaccination coverage without having to resort to a mandate?’ ” Professor Cheng said.

Mr O’Flaherty said that as restrictions eased in coming months while the Delta strain circulated in the community it was “inevitable there are going to be more cases” within the rail network.

The operator has since opened up more meal rooms and segregated teams to avoid the hundreds of drivers based at Flinders Street having to eat in small rooms at the same time.