A 108-year-old steam train ’emerged the victor’ in an 8mph crash with a Mercedes at a level crossing.

The crossing’s lights and sirens were sounding at the time when the train ploughed into the luxury vehicle at Sheringham station in Norfolk.

Luckily, the train had not yet picked up passengers but was on its way to hook up with a dining car for a dinner service.

Thanks to the low speed of the 1912 Y14 locomotive the occupants were able to escape from the mangled vehicle unharmed. 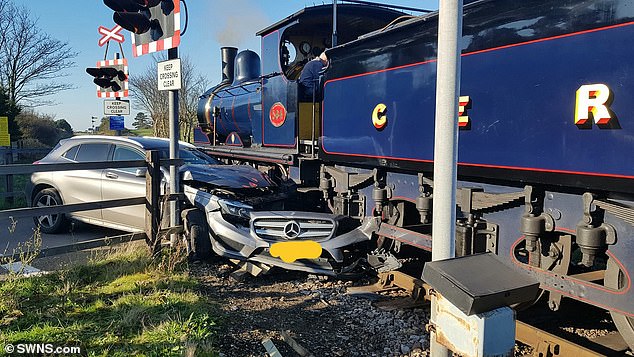 It is thought the motorist was heading to a nearby golf club at the time of the crash.

PC John Parker was on patrol nearby and responded to the rash, he tweeted from the scene saying: ‘Currently on scene at a train vs car incident. Unsurprisingly, the train emerged the victor.

‘Nobody injured fortunately but crossing to Sheringham Golf Club will be blocked for an hour or so.’

He added that there was no damage to the locomotive except for ‘a tiny bit of paintwork’ and that it was through a ‘very big dollop of luck’ that everyone escaped unscathed.

‘We are all so relieved that this was a low speed collision and that no-one was injured,’ he said. 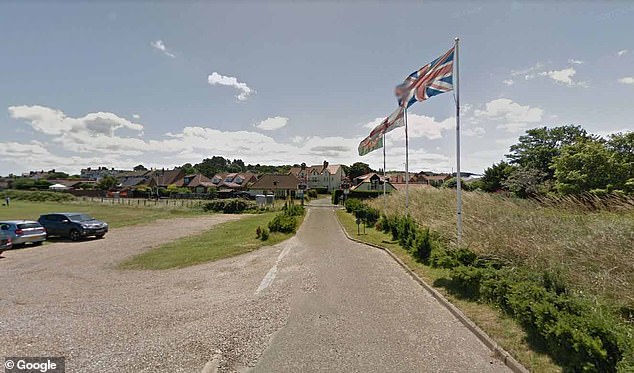 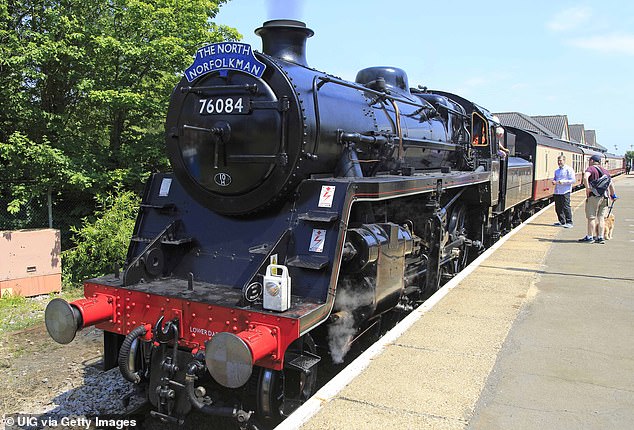 He added: ‘As the train crossed the level crossing it struck a car that was driving into the main road into the golf club.

‘The red lights were flashing away and the alarms were sounding, the car just didn’t stop.’

Howard Denner was at Sheringham Golf Club at the time the crash happened, he told Eastern Daily Press: ‘I heard the level crossing flashing then there was a big crash.

‘Everyone went out to see what had happened. The driver stepped out of his car.’

Annette Lloyd Thomas replied ironically to PC Parker’s scene image, saying: ‘How did the train operator not swerve in time? Did they not know that Mercedes always have the right of way?’

The popular Poppy Line route runs between Sheringham and Holt on the Norfolk coast.