Melbourne's biggest step out of its second wave of coronavirus restrictions hinges on the test results of thousands of people potentially linked to a growing outbreak in the city's north that will be received by Sunday morning.

Premier Daniel Andrews warned case numbers could "explode" if there was community transmission unfolding in Melbourne's north as retail and hospitality opened to customers for the first time in almost three months. 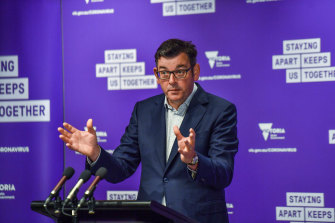 The outbreak grew by four to 32 cases across at least six households on Saturday. To understand the cluster's growth among over 400 identified contacts and whether more cases with an unknown source were appearing in the area, the Premier and the Victorian public health team were sweating on COVID-19 test results that will be delivered overnight.

"A lot of people had been banking on [Sunday] as the day where we would have absolute clarity about what October and November looks like," Mr Andrews said.

"If we can do that we will. But the appropriate thing to do, if you have thousands of tests in the laboratory being processed … you have to wait for the results."

Victoria's second wave soared in late June through family outbreaks largely in the northern and western suburbs. Mr Andrews said while this cluster was not an exact replica, authorities were testing and isolating with hyper-vigilance because Melbourne had "been in some respects in this position before".

"Almost certainly we will get more cases out of these separate outbreaks. The key point will be [on Sunday] and Monday and throughout the week, are they linked?" the Premier said. 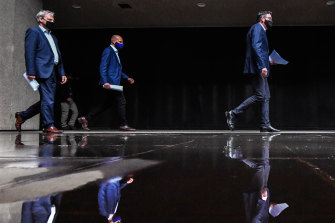 "If they're not, if there are no linkages, if they're not linked in any way, that speaks to the fact that there may be more virus in that northern part of the city than we would be comfortable with."

Ahead of further announcements on Sunday afternoon, Mr Andrews ruled out a localised lockdown of the northern suburbs similar to what occurred at the start of Victoria's second wave. In early July, the premier locked down 36 suburbs in 10 postcodes days before the rest of the state followed – a tactic that Professor Mike Toole, an epidemiologist with the Burnet Institute, said had proved ineffective.

"As we saw, you can't really enforce those restrictions and make people stay in a perimeter," Professor Toole said. "It will be an all or nothing call across Melbourne."

A second school, Croxton Special School in Northcote, has been shut after a positive test from a student who has links to the cluster, which has grown since a primary school student attended East Preston Islamic College for two days while infectious this week, leading to that school shutting.

The Croxton Special School student went to class for one day while infectious and their sibling, another student at East Preston Islamic College, has also tested positive after attending school on Monday. Those siblings and their parents made up Saturday's four cases connected to the cluster.

A total of 134 close contacts of the three school students are in isolation along with at least 307 "secondary contacts", some who have links to two more schools with testing under way among some families of Sirius College in Broadmeadows and Ilim College in Dallas.

The principals and teachers were assisting with contact tracing by liaising with families and keeping checklists of who had been tested on Saturday, a model praised by East Preston Islamic College principal Ekrem Ozyurek.

"Sometimes I think it’s overwhelming for parents when calls come directly from the Health Department," he said.

"If they get a call from somebody they don’t know, they can think, ‘hang on a minute, who is this, what have I done wrong?’" 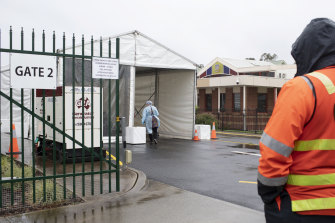 A pop-up testing site was established at East Preston Islamic School on Saturday, with all students and families from the school to be tested.Credit:Chris Hopkins

Victoria's head of testing Jeroen Weimar said some of those contacts lived in complex environments such as public housing, including the Flemington housing towers that were locked down in July and authorities had engaged schools, community figures and religious leaders to ask families to get tested and self-isolate .

Of about 17,200 tests completed on Friday, 2802 were in the northern suburbs – an increase of 35 per cent on the week before – and Mr Weimar said thousands more were expected on Saturday via pop-up testing centres such as one at East Preston Islamic College.

Chief Health Officer Brett Sutton said he was cautiously optimistic that authorities were gaining control of active cases in the northern suburbs cluster.

Flagging a late night of deliberating with his public health unit, Professor Sutton said Melbourne was travelling well on other metrics: on Saturday the city's 14-day daily average hit the previous reopening target of five while he said he was comfortable with the overall number of 10 "mystery" cases in the past fortnight, including only "a couple" in the last week.

Mr Andrews also rejected suggestions that the Health Department failed to communicate clearly with the Somali family who sent their child to East Preston Islamic College on Monday and Tuesday despite some members of the family nursing active COVID-19 infections.

"I'm not accepting the notion that the response of our dedicated public health team was not complete. We are confident that we did communicate … but the child went to school," he said.

"The notion that whenever something happens that ought not to have happened that that's a fundamental deficiency on our public health response is not fair." 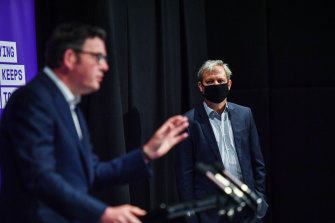 The Premier said Sunday's announcement would possibly include updates on restrictions such as the 25-kilometre movement limit and when the "ring of steel" separating Melbourne and regional Victoria could be lifted.

After a promising week of low single-digit case numbers, the government had advised retailers that staff could return to work to start preparing their stores from Wednesday this week.

Professor Toole said the government should be particularly cautious around reopening large shopping centres where high numbers of people move in an unregulated way.

He said outdoor activities such sport and outdoor dining would likely be safe to return this week but home visits – which were slated to return after Sunday, meaning Melburnians could host visitors from one family at a time – also posed a risk.

"If you have a different family around every night and one person gets infected, that makes contact tracing difficult. I do think a bubble is a good idea, where you nominate one family rather than having five families over in a week," he said.

Victoria reached fewer than 100 active cases for the first time since June 19 on Saturday and Professor Toole said that low caseload should give the government confidence that its team of 2100 contact tracers was on top of the northern suburbs outbreak.

When retail does reopen, Vicinity Centres, which runs shopping centres such as Chadstone, Northland and Emporium, revealed it would use initiatives such as a website that allows customers to view real-time foot traffic, a virtual queueing app to book times to visit stores and safety officers at every entrance.

Opposition Leader Michael O'Brien said Melbourne should not be held back by the northern suburbs outbreak and called on the government to trust its contact tracing and outbreak management. He said small business in particular should be allowed to reopen this week.

"We're talking about businesses that have been closed for most of this year. Many of them are hanging by an absolute thread and they need to reopen now," Mr O'Brien said on Saturday.

"It's time for Melburnians to get our freedoms back, and we expect to see a very significant reopening of our lives on Sunday because that's what we've earned and that's what the Premier needs to deliver."

Mr Ozyurek said the father of the student who wrongly went to East Preston Islamic College was very upset this week.

"He was thinking of leaving the area but I told him you’re still a part of our community," Mr Ozyurek said. "I told him to stay put and stay strong, for your family."