Melburnians shivered through the coldest morning in four years on Wednesday as a cold front moving in from the Southern Ocean brought frosty temperatures and icy conditions to large parts of the state.

Temperatures in the CBD dropped to 1.2 degrees about 6.20am, the lowest morning temperature recorded in the city centre since 2018, while Viewbank, Moorabbin, and Melbourne Airport recorded readings below zero. 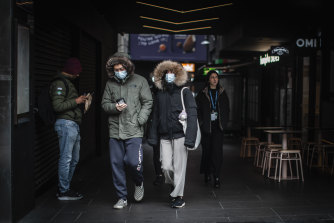 Melburnians rug up for the cold winter conditions.Credit:Scott McNaughton

The last time temperatures in the city dropped close to zero was on August 29, 2018, when a minimum of 0.8 degrees was recorded.

However, the coldest temperatures were registered in the alpine resorts, where the mercury dropped to minus 7 degrees.

“That is the coldest morning since 2018, so certainly not the coldest on record, but certainly the coldest in a little while,” Bradbury said. “Large parts of the state are possibly seeing severe frost around and that’s when we get the really cold temperatures, so less than minus 2 degrees.”

At Elwood beach, in the city’s south, early risers braved the winter temperatures to go for a swim in the bay. Some were dressed in wetsuits, while others jumped in the water in their underwear after going for a run.

Ella Pike, who regularly goes for a morning dip, said some of her friends had pulled out of the swim overnight, wary of the cold temperatures.

“When you get out at the moment the sand is what gets you the most,” she told Nine’s Today show. “The sand on the feet is like knives.”

Jane, who jumped into the water after going for her morning run, said it felt like “shards of ice are hitting your legs”.

The cold temperatures are the result of a strong cold front moving across Victoria that carried cold air from the Southern Ocean and is being held in place directly over the state by a high-pressure system.

“When we get the clear skies overnight and that really dry air that comes in after the front, that’s when we see the very cold and frosty nights coming,” Bradbury said. “That’s essentially what we are seeing this week.”

Melbourne will experience another cold morning on Thursday, with sub-zero temperatures forecast across large parts of central and eastern Victoria. Temperatures will increase later in the week, with tops of 15 and 17 degrees expected on Friday.

Bradbury said daytime conditions would remain cool and sunny throughout the week.

The cold snap comes as tens of millions of people are suffering through an unprecedented heatwave in Europe which sparked fires across the continent’s south before striking France, Germany, and the United Kingdom. At least two people have died after being encircled by flames in north-western Spain.

Britain recorded its hottest day ever on Tuesday (UK time) and the UK Met Office declared that a new provisional record temperature of 40.3 degrees had been recorded in Coningsby, in central England.

The Met Office issued its first “red warning” for dangerous temperatures on Monday and Tuesday, prompting hundreds of train services to be suspended and London Luton Airport to be closed due to damage to the runway, along with school closures and the suspension of some hospital services.

Extreme heat warnings have also been declared in France and Germany.

Get to the heart of what’s happening with climate change and the environment. Our fortnightly Environment newsletter brings you the news, the issues and the solutions. Sign up here.