London: Meghan, the Duchess of Sussex, has revealed that she hid references to Diana, Princess of Wales in her new children’s book.

The Bench, written by Meghan, which was inspired by the Duke of Sussex’s relationship with the couple’s two-year-old son, Archie, includes illustrations of her mother-in-law’s favourite flower, forget-me-nots.

The subtle nod to the Princess is one of numerous personal “nuggets tucked within the book”, Meghan said in her first media interview on The Bench. 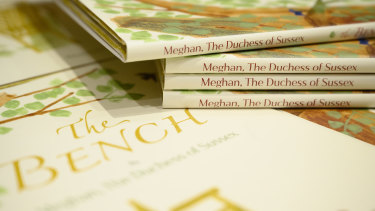 Meghan’s debut publication topped a New York Times best-sellers list earlier this month, but has not been received as well in Britain where it failed to make Amazon’s top 100 most popular books.

Speaking to NPR, the US radio network, Meghan revealed that Archie loves the book and has a “voracious” appetite for reading.

“There are nuggets tucked within the book,” she said. “There’s a lot if people start digging, you can find sweet little moments that we have tucked in there, from my favourite flower and even my husband’s mum’s favourite flower, forget-me-nots. 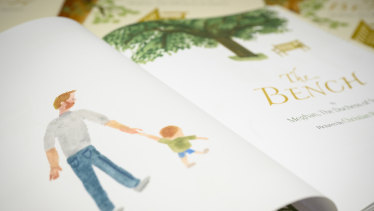 A father and son in Meghan Markle’s book “The Bench”. Credit:Getty

“We wanted to make sure those were included in there. There’s a lot of special detail and love that went into this book.”

Meghan added: “Archie loves the book, which is great because he has a voracious appetite for books and constantly when we read him a book he goes ‘again, again, again’.

“But now the fact he loves The Bench and we can say ‘Mummy wrote this for you’ feels amazing.”

It is not the first time the Meghan and Prince Harry have paid tribute to his late mother with her favourite flower, which was included in the Duchess’s wedding bouquet when she married the Duke in 2018.

To commemorate 23 years of Diana’s death, last year the couple planted forget-me-not seeds at an infant school in LA, where the couple relocated after formally announcing to step back from the Royal family.

In this weekend’s radio interview, which was recorded before the birth of the couple’s second child, Lilibet, earlier this month, the Duchess said she did not feel represented in children’s books when she was a young girl.

“Growing up, I remember so much how it felt to not see yourself represented,” she said.

“So any child or any family hopefully can open this book and see themselves in it, whether that means glasses or freckled or a different body shape or a different ethnicity or religion.” 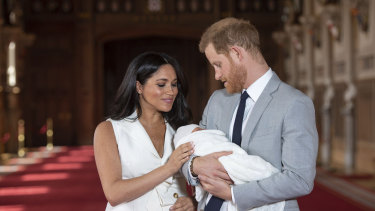 Meghan, the Duchess of Sussex and Prince Harry with their son Archie after his birth in 2019.Credit:PA

The book also includes a reference to a military family after Meghan went on a tour with a sergeant from Texas several years ago.

“He had told me the story about how he wasn’t able to teach his son how to play catch because he was away,” she said.

“And so he and his son would mail this baseball back and forth to each other from Texas to Afghanistan and write the date on it.”

Meghan revealed that the book was born out of a Father’s Day present for Harry two years ago, after she bought him a bench with the engraving: “This is your bench, Where life will begin, For you and our son, Our baby, our kin.”

The engraving now forms the opening line of her new book, which includes illustrations of characters that have been widely interpreted as her own family.

The first page features a bearded, ginger father cradling a smiling baby on a bench under a tree, alongside the forget-me-not flowers, while the final illustration features a ginger-haired man helping a young boy feed chickens while a dark-haired woman stands in a garden cradling a baby, widely assumed to be Meghan and her newborn daughter.

Discussing the moment she decided to get her husband a bench for Father’s Day, Meghan said: “As most of us do, you go, ‘what am I going to get them as a gift?’ And I thought I just wanted something sentimental and a place for him to have as a bit of a home base with our son.”

She continued: “I often find, and especially in this past year, I think so many of us realised how much happens in the quiet.

“It was definitely moments like that, watching them from out of the window and watching [my husband] just, you know, rock him to sleep or carry him or those lived experiences, from my observation, are the things that I infused in this poem.”

The book includes illustrations by Christian Robinson, the artist who said he was in “complete disbelief” when he was asked if he wanted to collaborate with the Duchess.

“This was just like, one day getting an email being like, ‘Would you want to work with Meghan, the Duchess of Sussex?’ And I’m in complete disbelief and excited,” he said. “For me it was a no-brainer.”