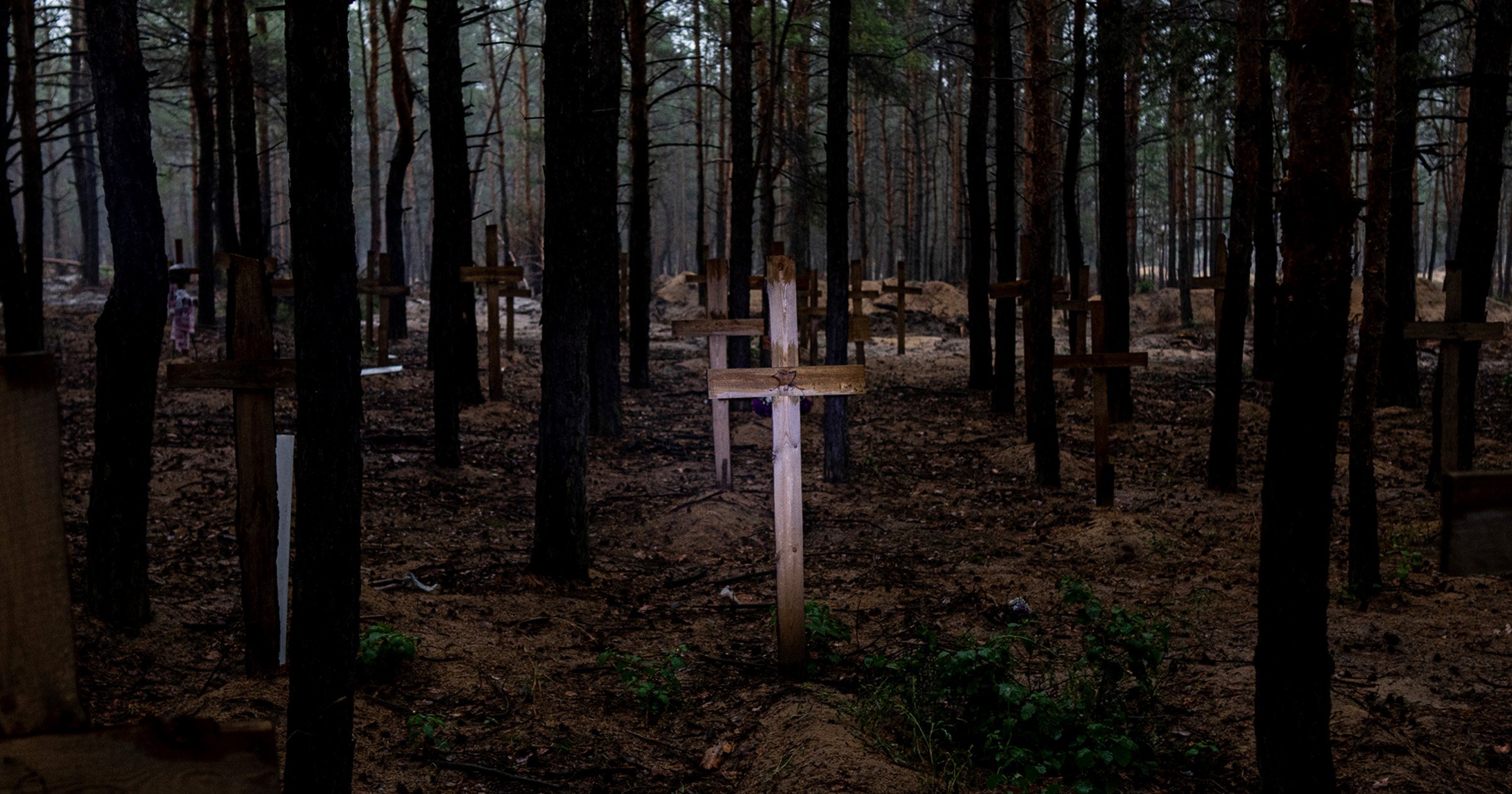 A mass burial ground with around 440 individual graves has been found in the liberated Ukrainian city of Izyum.

In a haunting reminder of the death toll of Russia’s invasion of Ukraine, officials say the burials included people killed by shelling and air strikes.

Thousands of Russian troops fled the northeastern town after using it as a linchpin to resupply and reinform its troops last week.

‘Mass graves are being discovered in Izyum after liberation from [Russia],’ the Ukrainian defence ministry tweeted yesterday.

President Volodymyr Zelensky said in a video address: ‘We want the world to know what is really happening and what the Russian occupation has led to.

‘Russia is leaving death behind it everywhere and must be held responsible.’

During Russia’s five-month occupation of Izyum, Russia ‘only destroyed, only deprived, only took away’, Mr Zelensky added.

‘They left behind devastated villages; in some of them there is not a single undamaged house.

Mr Zelensky compared the grave site to the violent atrocities uncovered in Bucha earlier this year, on the outskirts of Kyiv.

Local authorities said 458 mutilated and burnt bodies were recovered from the town, including nine children, in April. Evidence of a torture chamber was also found.

But what took place in Izyum is even worse, government officials say.

Anton Gerashchenko, an adviser to Ukraine’s minister of internal affairs, told the BBC: ‘We were shocked to see the destruction of the city.

‘We have found already, for now, around 1,000 dead bodies, so we must say that this tragedy is even worse than the tragedy in Bucha.’

One of the grave markers said it contained the bodies of 17 Ukrainian soldiers.

Zelensky’s chief of staff, Andriy Yermak, tweeted a sombre image of wooden crosses jutting up from the earth in a forest.

Ukraine’s lightning counter-offensive left Russian officials stunned and boosted morale at a time when it seemed the war would end in defeat.

But Ukrainian authorities have been left reeling by what they have discovered in the province.

Deputy interior minister Yevhen Enin told Radio NV: ‘We have already come across the exhumation of individual bodies, not only with traces of a violent death but also of torture — cut off ears, et cetera.

‘This is just the beginning.’

At least 5,718 civilians have died during the nearly seven-month war, according to the United Nations. Ukraine estimates put the toll at more than 7,000.