Maskless pope visits region liberated from clutches of ISIS on third day of historic trip to Iraq amid Covid fears over Sunday mass with 10,000 set to attend

Pope Francis has prayed for those killed in Iraq’s wars amid the haunting backdrop of four ruined churches in the northern city of Mosul, which were destroyed in the war against Islamic State (IS).

As women ululated and a white dove was released as a sign of peace, the 84-year-old pontiff, who appeared without a mask but has received his Covid-19 vaccination, inaugurated a memorial to the dead on the final day of his historic visit to Iraq, on Sunday.

His trip marks the first ever papal visit to the country. 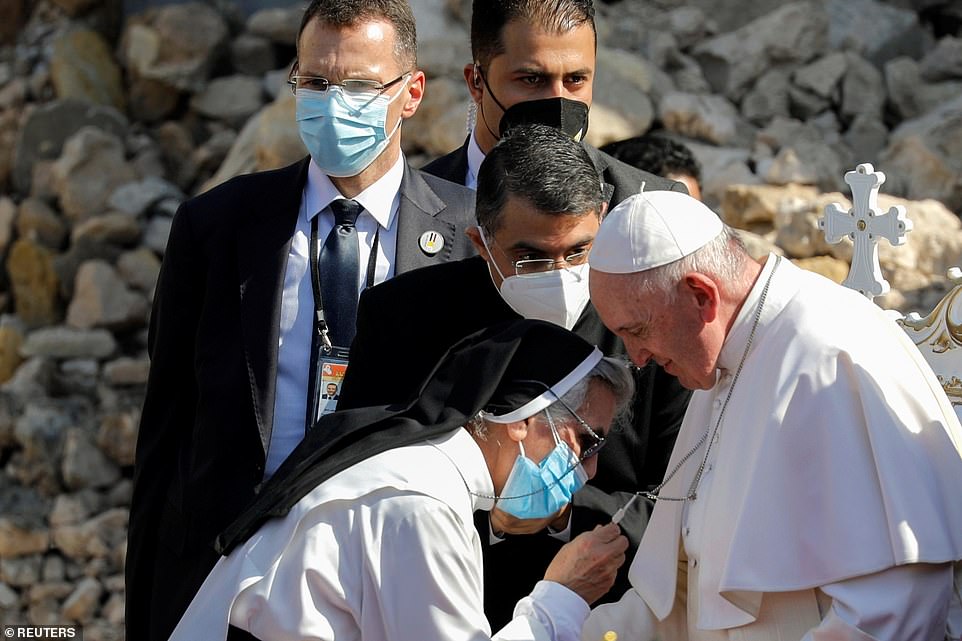 A nun greets Pope Francis during a prayer for war victims at Hosh al-Bieaa in Church Square, located in Mosul’s Old City, Iraq 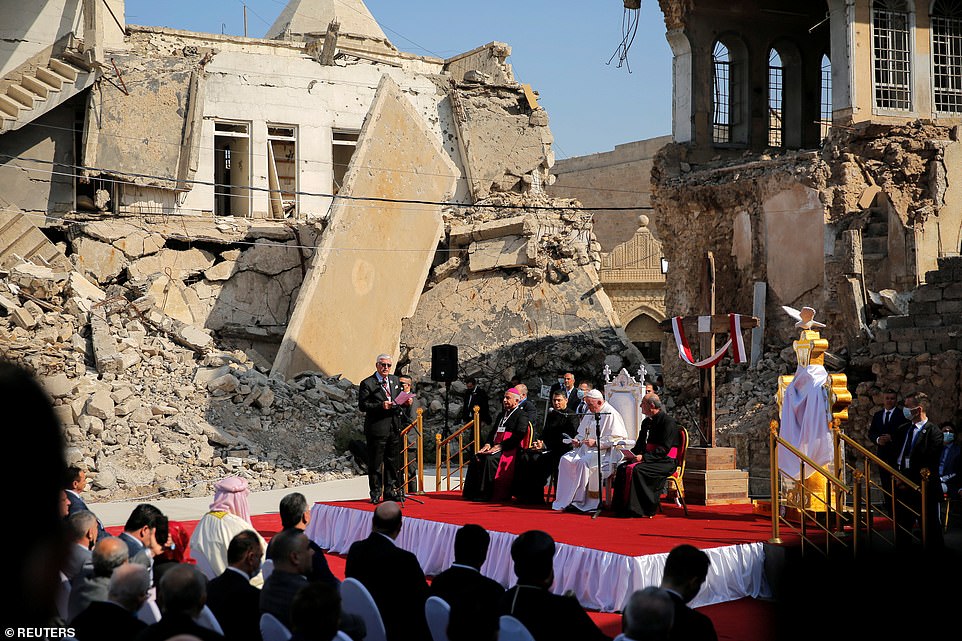 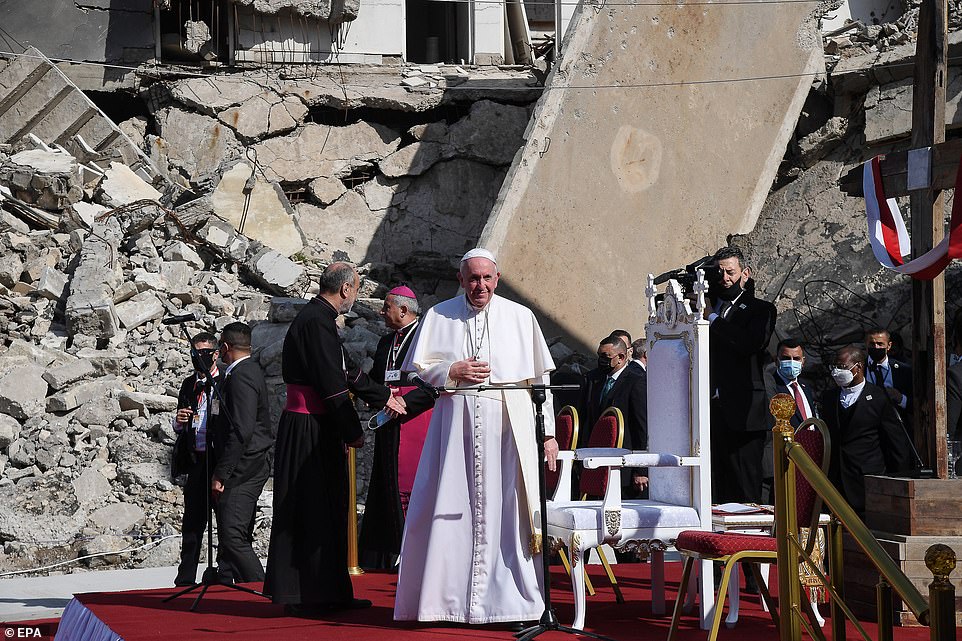 On the third day of his historic visit to Iraq, Pope Francis held a memorial service for thousands of victims killed in Iraq’s wars 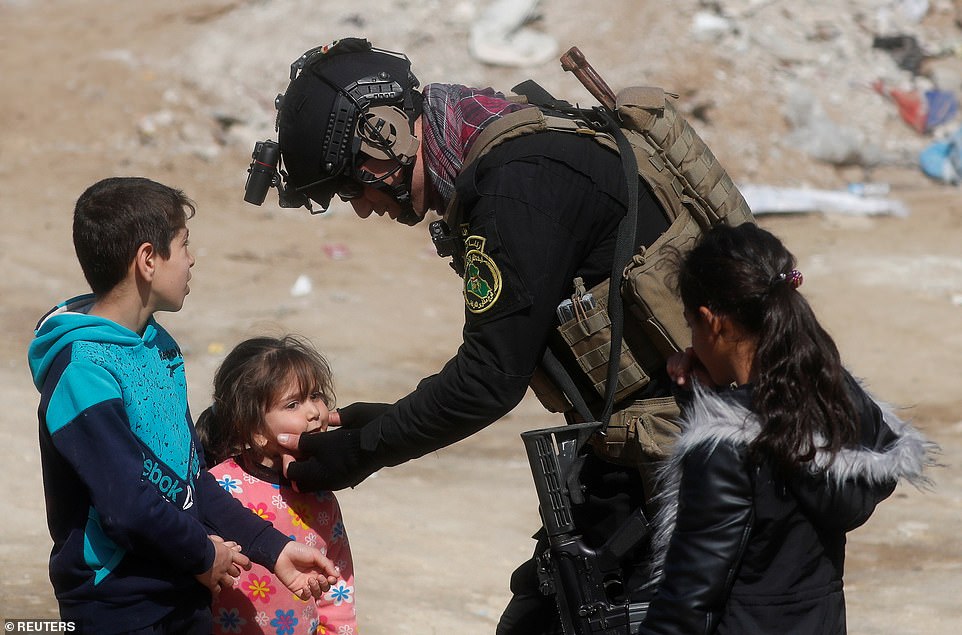 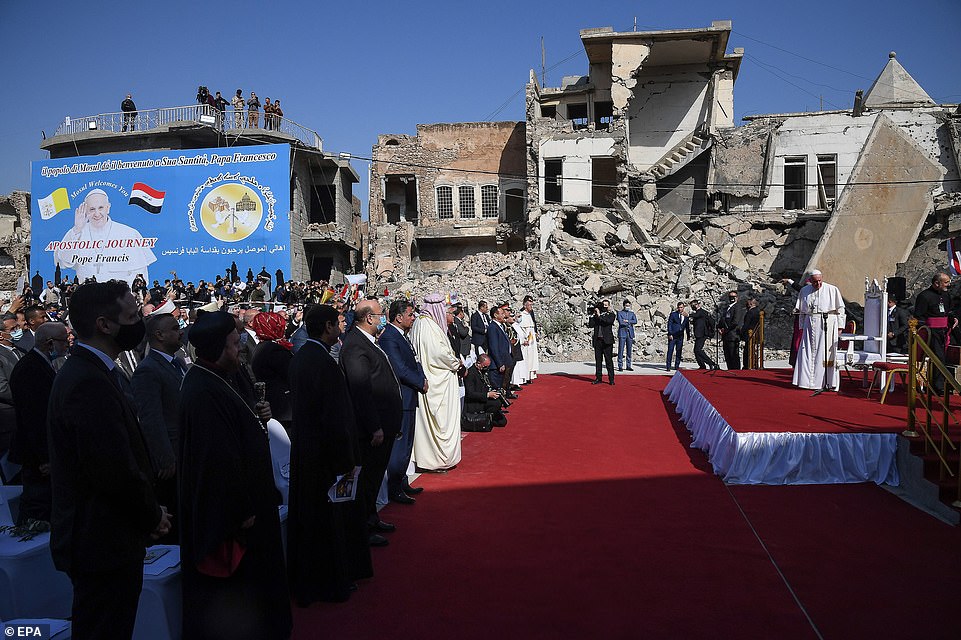 In words translated into Arabic, Francis prayed: ‘If God is the God of life – for so he is – then it is wrong for us to kill our brothers and sisters in his name.

‘If God is the God of love – for so he is – then it is wrong for us to hate our brothers and sisters.’ 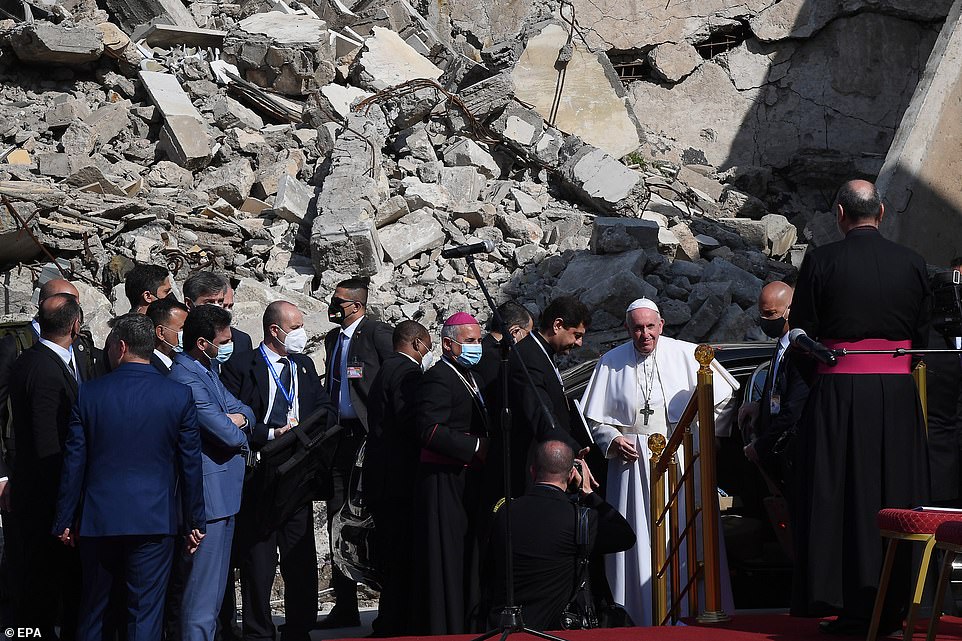 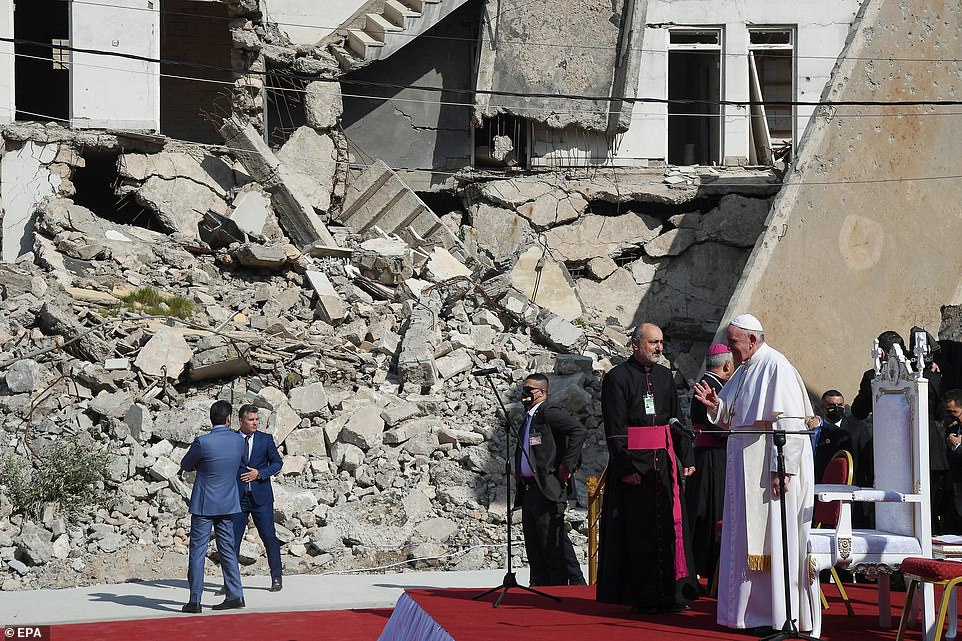 The city was finally liberated in 2017 after a ferocious nine-month battle in which 9,000 to 11,000 civilians were killed 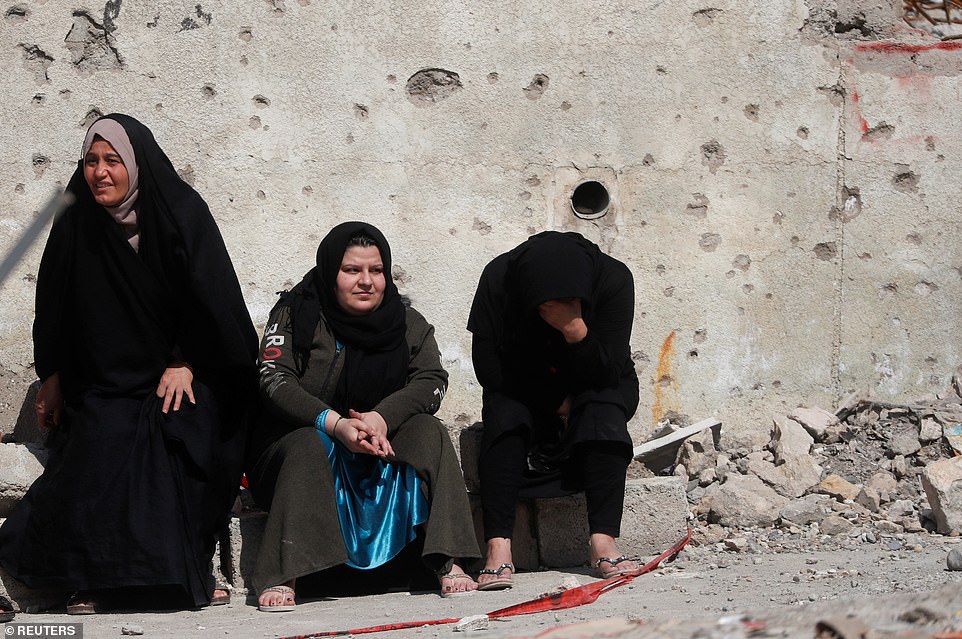 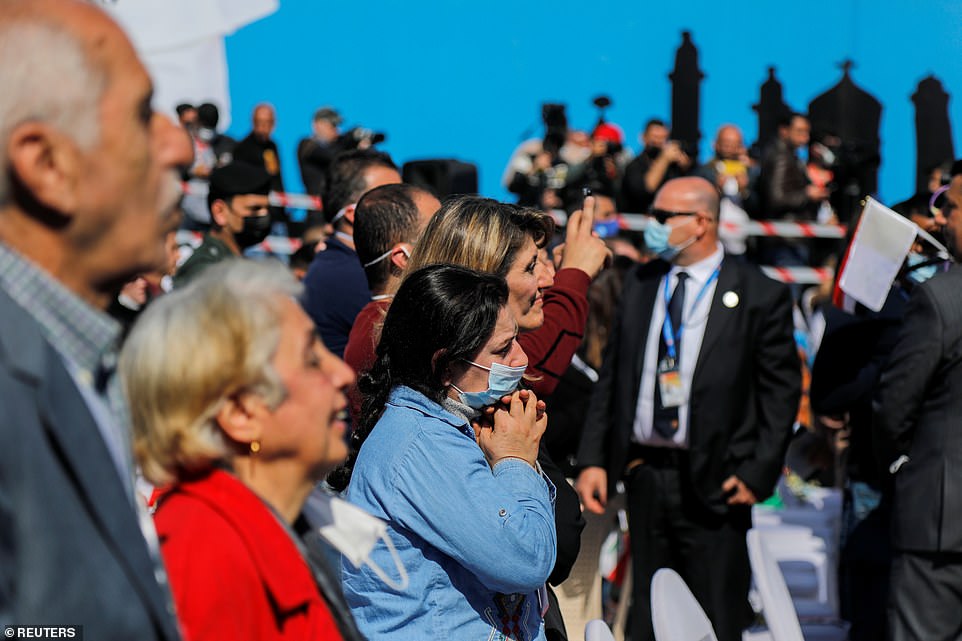 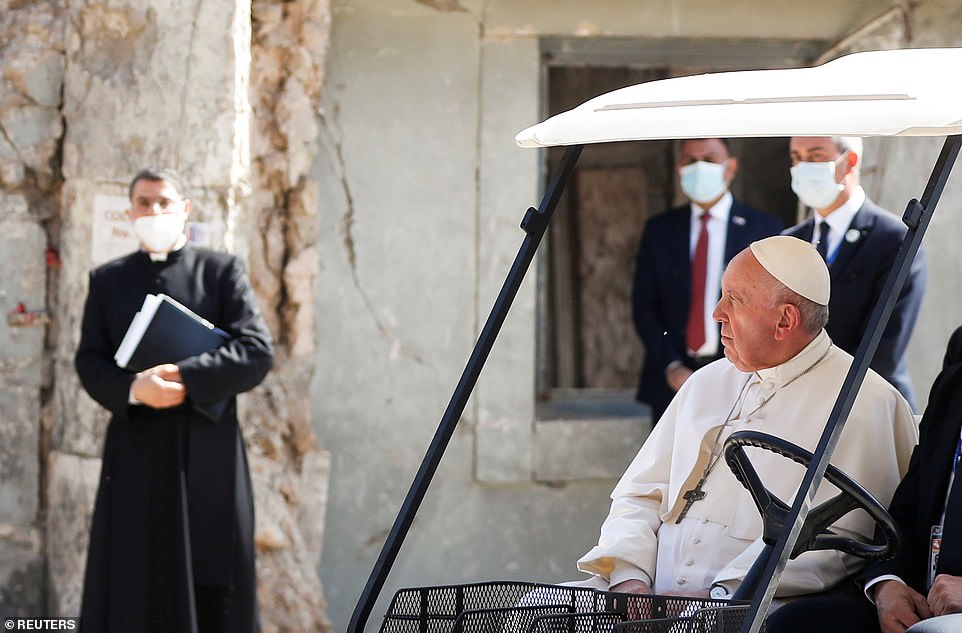 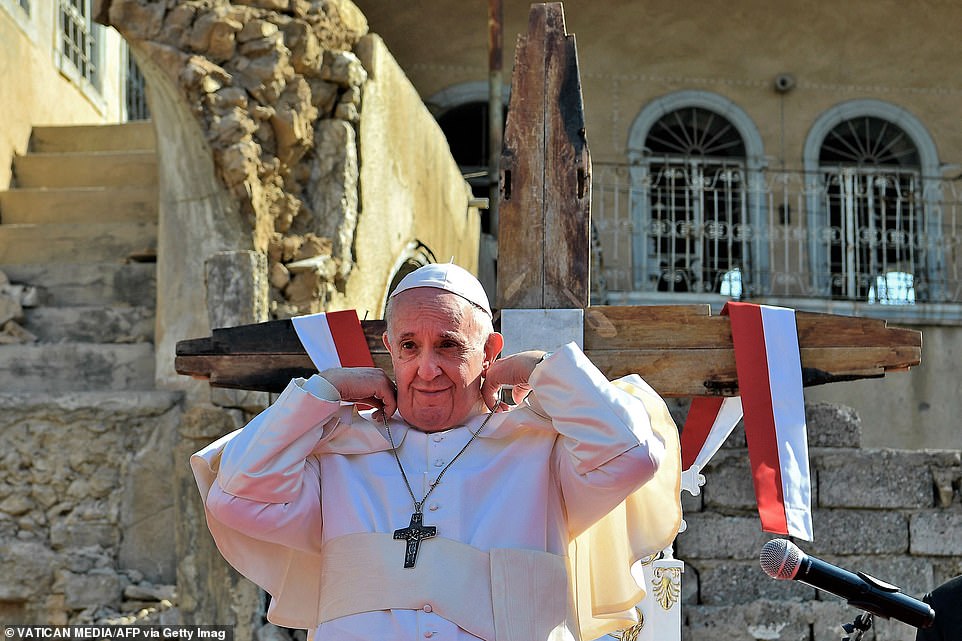 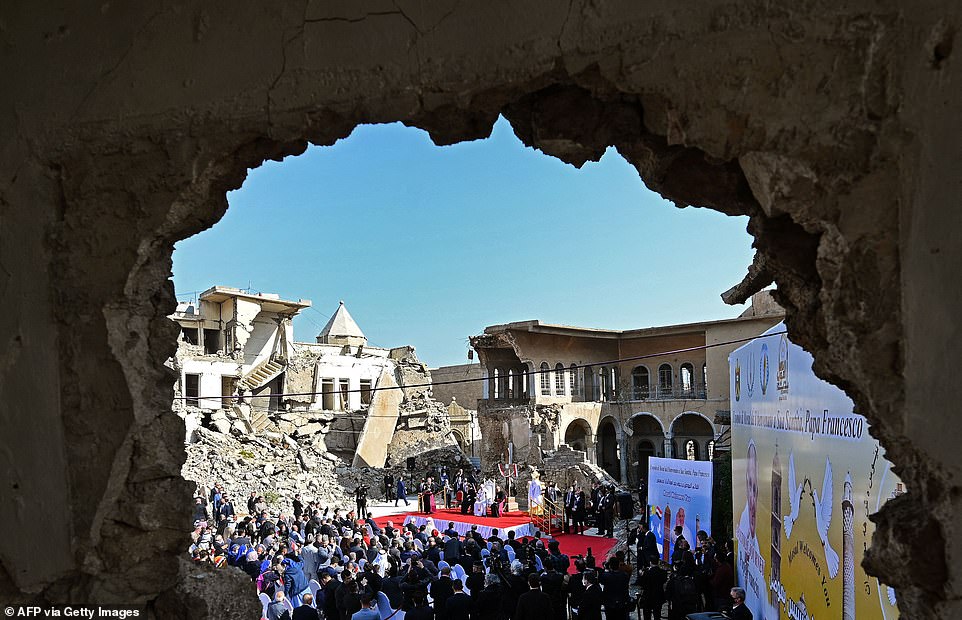 ‘May they repent, touched by the power of your mercy.’

IS overran Mosul in June 2014 and declared a caliphate stretching from territory in northern Syria deep into Iraq’s north and west.

It was from Mosul’s al-Nuri mosque that the group’s leader, Abu Bakr al-Baghdadi, made his only public appearance when he gave a Friday sermon calling on all Muslims to follow him as ‘caliph’.

Mosul held deep symbolic importance for IS and became the bureaucratic and financial backbone of the group.

It was finally liberated in July 2017 after a ferocious nine-month battle in which between 9,000 and 11,000 civilians were killed, according to an Associated Press investigation.

Francis will travel by helicopter across the Nineveh plains to the small Christian community of Qaraqosh, where only a fraction of families have returned after fleeing the IS onslaught in 2014.

He will hear testimonies from residents and pray in the Church of the Immaculate Conception, which was torched by IS and restored in recent years.

He will end the day with a Mass in the stadium in Irbil, in the semi-autonomous northern Kurdish region, which is expected to draw as many as 10,000 people despite fears it could become a super-spreader event.

He arrived in Irbil early on Sunday, where he was greeted by children in traditional dress and one wearing a pope outfit.

Iraq declared victory over IS in 2017, and, while the extremist group no longer controls any territory, it still carries out sporadic attacks, especially in the north. 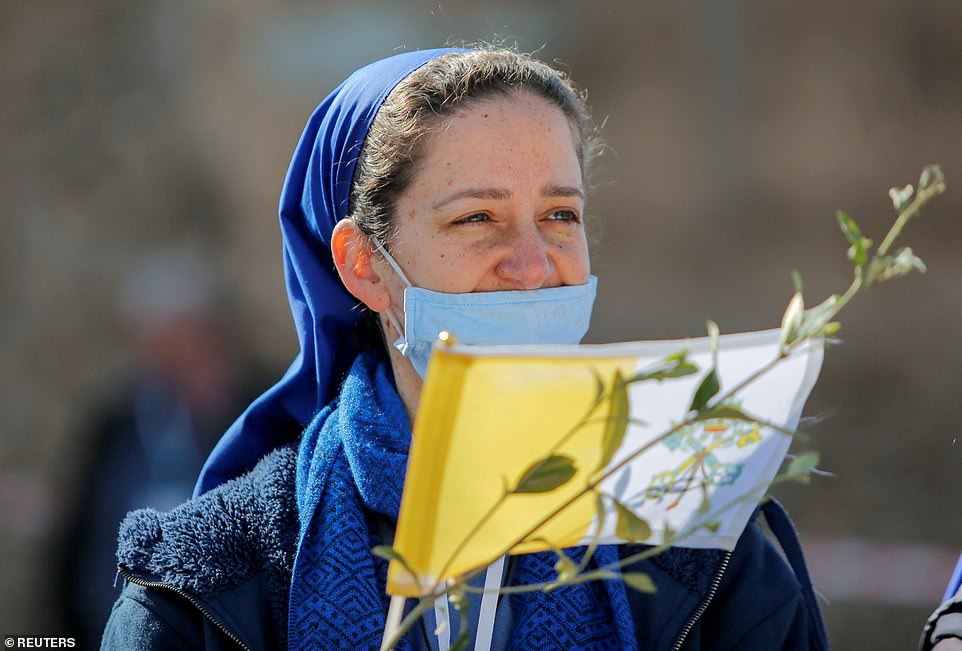 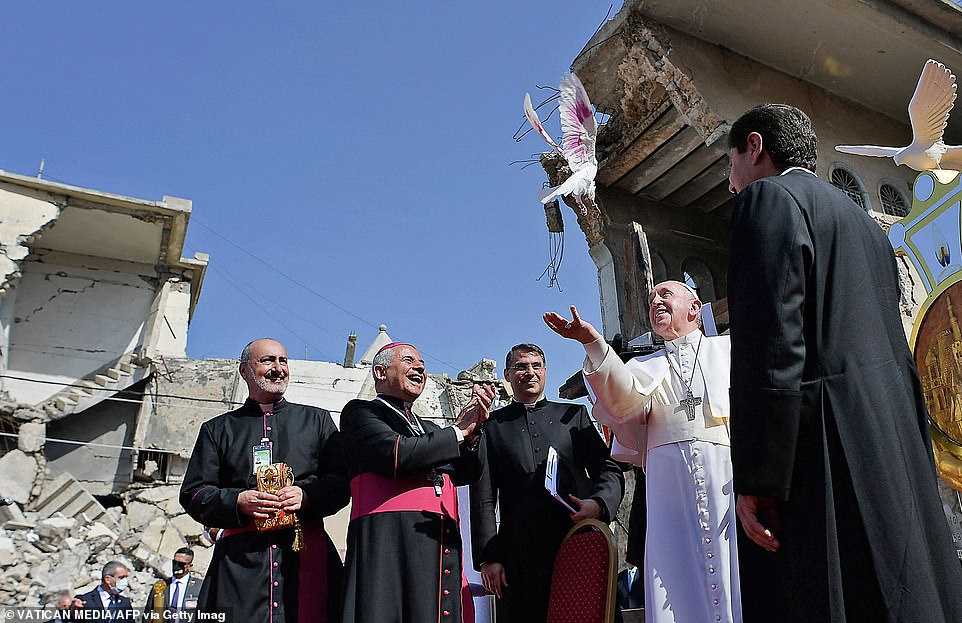 Pope Francis released a white dove, the symbol of peace, near the ruins of the Syriac Catholic Church in Mosul 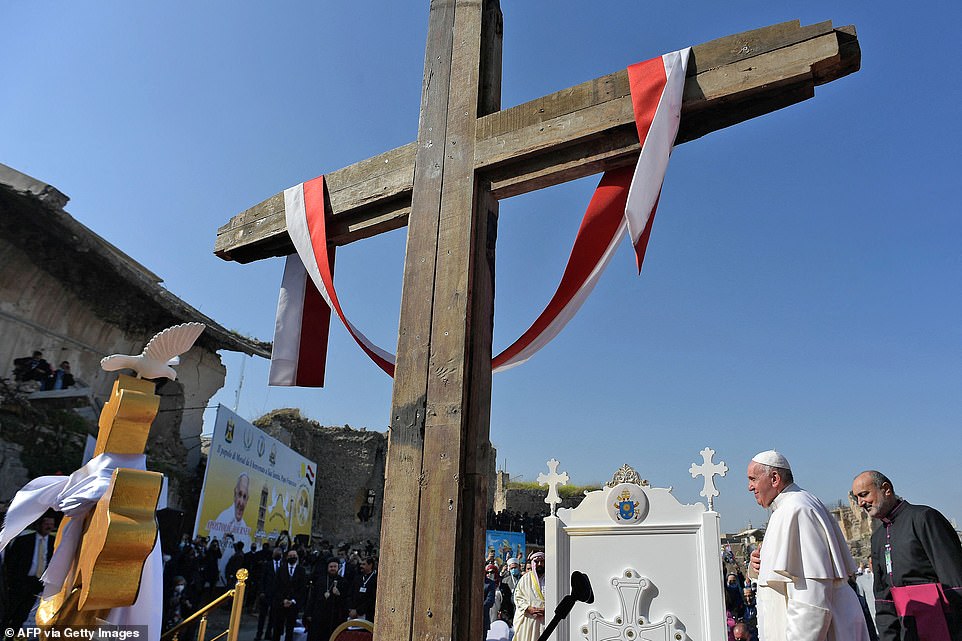 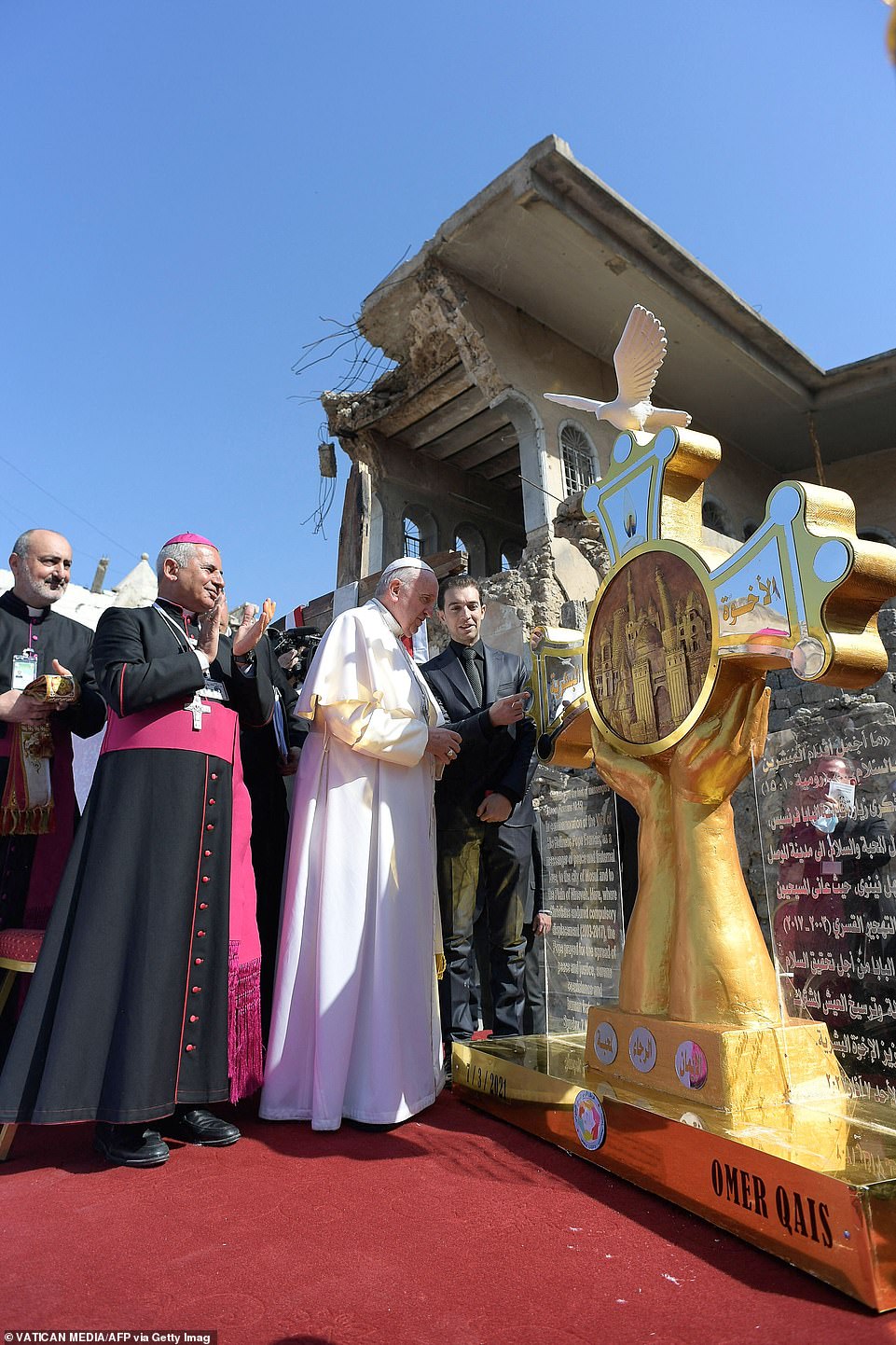 The country has also seen a series of recent rocket attacks by Iran-backed militias against US targets, violence linked to tensions between Washington and Tehran.

The IS group’s brutal three-year rule of much of northern and western Iraq, and the gruelling campaign against it, left a vast swathe of destruction.

Reconstruction efforts have stalled amid a years-long financial crisis, and entire neighbourhoods remain in ruins.

Many Iraqis have had to rebuild their homes at their own expense.

Iraq’s Christian minority was hit especially hard. The militants forced them to choose among conversion, death or the payment of a special tax for non-Muslims.

Thousands fled, leaving behind homes and churches that were destroyed or commandeered by the extremists.

Iraq’s Christian population, which traces its history back to the earliest days of the faith, had already rapidly dwindled, from around 1.5 million before the 2003 US-led invasion that plunged the country into chaos to just a few hundred thousand today. 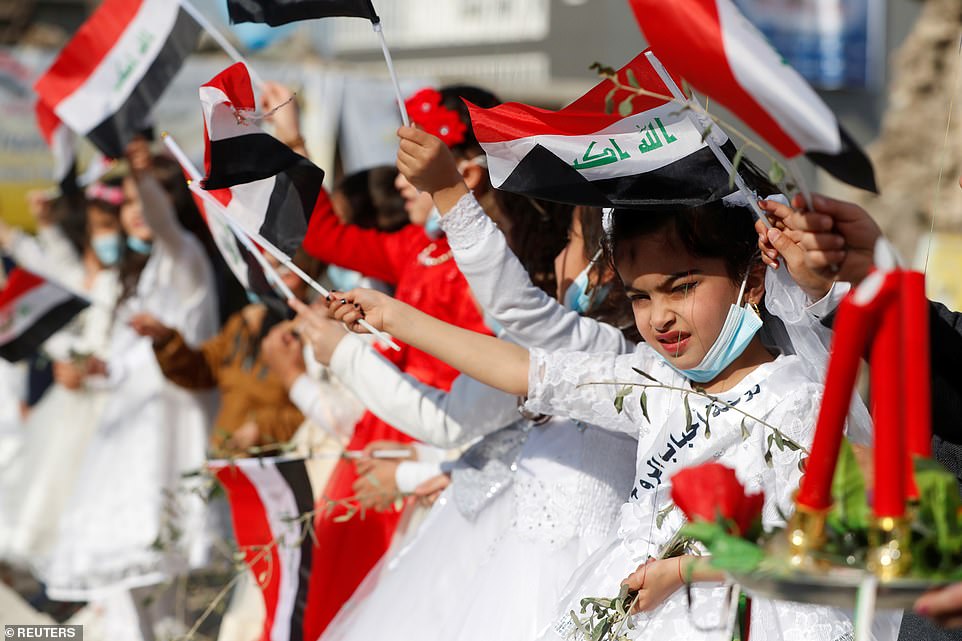 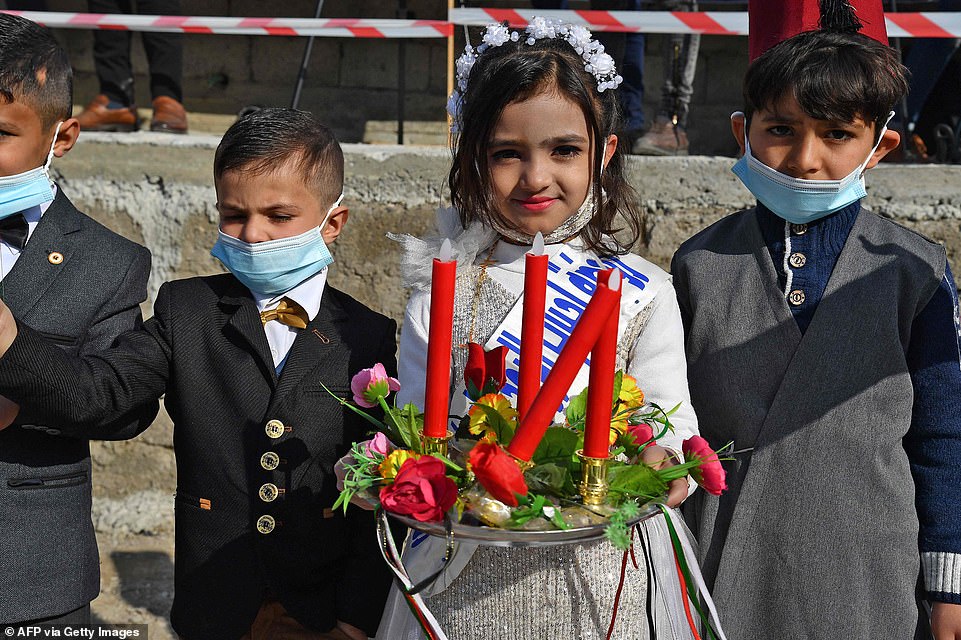 Iraq’s Christian minority was persecuted by Islamic State militants, who forced conversion, death or high taxes onto them 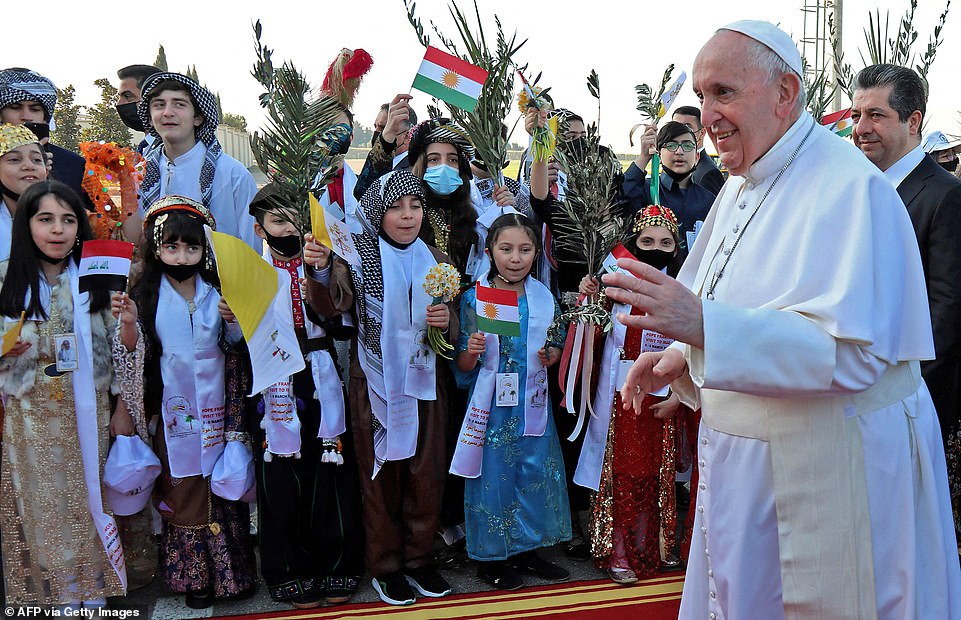 Pope Francis, accompanied by Masour Barzani, right, Prime Minister of the 9th cabinet of the Kurdistan Regional Government, greets Iraqi youngsters dressed in traditional costumes upon his arrival at Arbil airport on Sunday

Francis hopes to deliver a message of hope, one underscored by the historic nature of the visit and the fact that it is his first international trip since the start of the coronavirus pandemic.

Public health experts had expressed concerns ahead of the trip that large gatherings could serve as superspreader events for Covid-19 in a country suffering from a worsening outbreak where few have been vaccinated.

The Vatican has said it is taking precautions, including holding the Mass outdoors in a stadium that will only be partially filled.

But throughout the visit, crowds have gathered in close proximity, with many people not wearing masks.

The Pope and members of his delegation have been vaccinated, but most Iraqis have not. 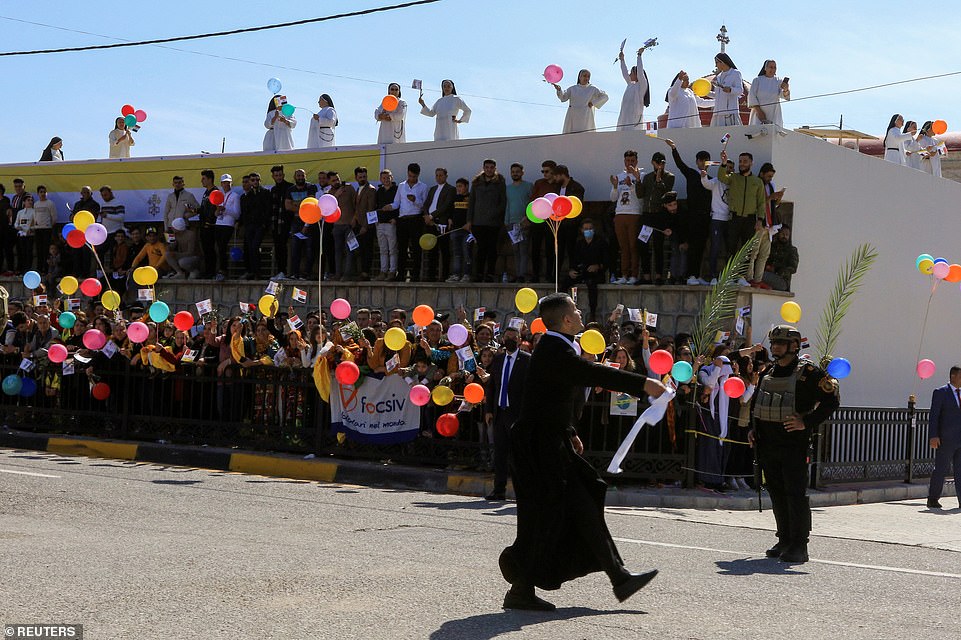 After his visit to Mosul, Pope Francis travelled by helicopter to the small Christian community of Qaraqosh, where only a fraction of families have returned after fleeing the IS onslaught in 2014 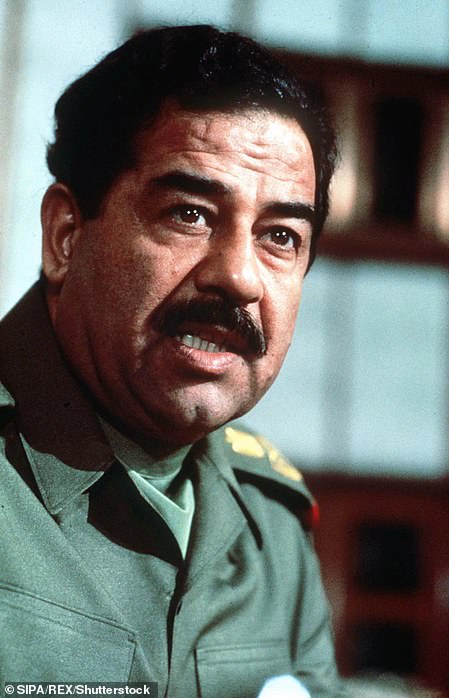 The Christian population in Iraq has collapsed following years of persecution and sectarian violence, from 1.5 million in 2003 to fewer than 400,000 today.

This largely took place following the US-led invasion which toppled the regime of Saddam Hussein in 2003, falling around 83 per cent to now make up just one per cent of the population.

Under Hussein’s Baathist rule, minorities including Christians ‘felt much more protected … than they do currently,’ with several who practised the faith serving as Foreign Minister and even Deputy Prime Minister.

Adeed Dawisha, a professor at the University of Miami in Ohio, said this protection came in the form of a ‘social contract,’ adding: ‘Under Saddam, it was understood that if you don’t interfere in politics, then you are provided with a good life.’

He told PBS: ‘If the Christians supported Saddam, not because they loved what he was doing, it was the fear of the alternative.’

However, following the fall of Hussein in the Iraq War the population dwindled, and Christians have become the target of ongoing sectarian violence.

They have been the victim of mass executions, forced displacement campaigns, torture, violence and have been targeted by terrorist groups including al-Qaeda and ISIS.

The majority of Iraqi Christians fled to the Iraqi Kurdistan or abroad as they feared persecution, with the Shlama Foundation suggesting there were around 150,000 Assyrian Christians remaining in Iraq in July 2020.

Thousands found refuge in Baghdad, while others ran to the Shia-majority city of Najaf in southern Iraq, which housed thousands of displaced Christians.

A significant population returned home following the defeat of ISIS in Iraq in December 2017, and were able to once again celebrate Christian festivals such as Christmas and Easter.