EXCLUSIVE: Man, 24, faces animal neglect charges after he left his dog, Stella, tied up at Iowa airport while he caught a flight – because he didn’t take a kennel for the pup to travel in

A man is facing animal abandonment and neglect charges after he left his adorable dog tied up at an airport in Iowa while he caught a flight to New Jersey.

Bigsen Charles, 24, claims that he didn’t know he needed a kennel to transport his puppy on the plane – so decided to tie the pup up outside the airport and make his journey alone instead.

Stella the puppy was abandoned outside Des Moines Iowa Airport on Thursday morning after Charles paid for the dog’s fare and assumed that was all he need to before he boarded his flight heading to Newark.

He told DailyMail.com: ‘I already checked in and didn’t want to miss my flight. I thought if I paid for the dog on the plane they would give her a kennel. I didn’t know I had to bring my own.’ 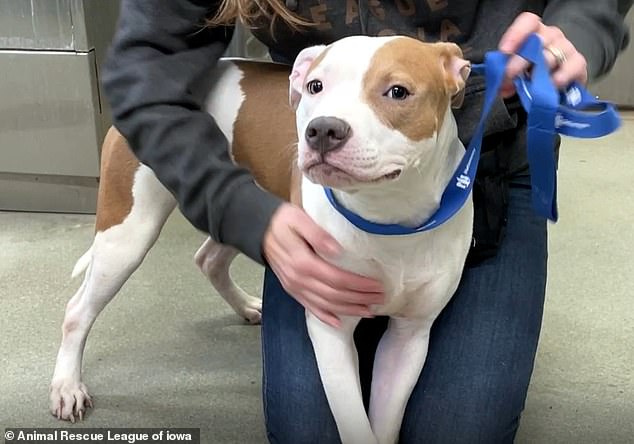 Stella will now get a new home after being left at the airport by Bigsen Charles, 24 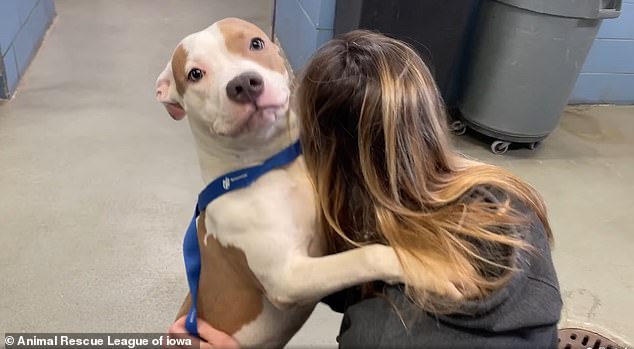 Stella is being looked after by animal caretakers after being found tied up outside an airport in Iowa. Her owner Bigsen Charles, 24, now faces animal neglect and abandonment charges for leaving the adorable pup on her own while he got on a flight 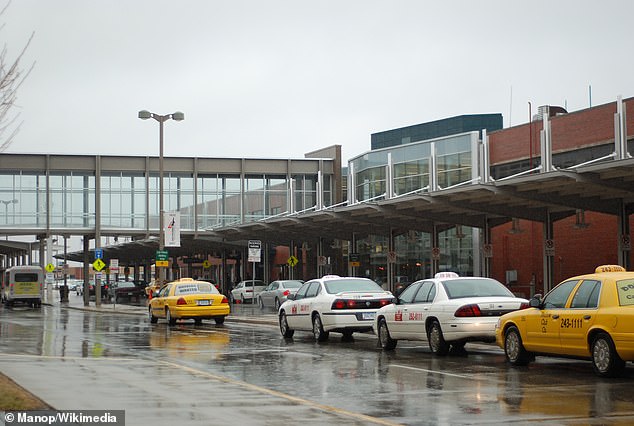 The outside of Des Moines airport in Iowa where Stella was tied up and left on Thursday morning after her owner rushed to catch a flight to Newark, New Jersey

Charles said he asked the driver who took him to the airport to pick up his dog and he would pay him double – but the driver was unable to. He then asked he people at the airport if he could leave his pup inside.

When he wasn’t able to make any progress, Charles said he tied his dog up and left her outside. He said he hoped maybe one of his friends could help him with the dog to eventually pick her up, but they never did.

‘I was crying when I left her because I didn’t want to leave her. I bought the dog for my daughter,’ he said. ‘I knew someone would end up taking her.’

When airport officials saw the abandoned dog they immediately contacted Animal Rescue League of Iowa, who sent an animal control officer to retrieve the puppy. 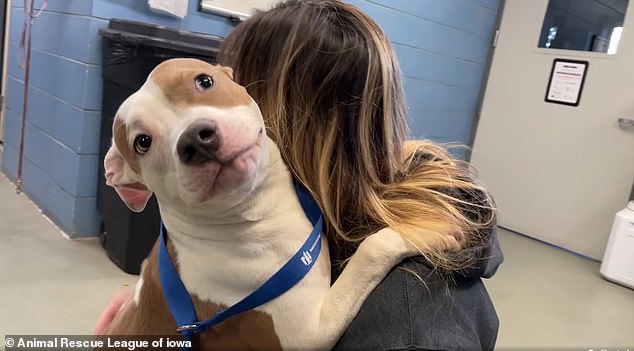 Stella giving Carley, one of the animal caretakers at Animal Rescue League of Iowa, a big hug

Tina Updegrove told DailyMail.com exclusively that she had been trying to contact the owner since Thursday and when she first saw the dog. Airport staff gave her a blanket until she was able to take the puppy to the shelter.

‘During the drive from the airport to the shelter, she warmed up to me. Her tail was wagging and she was smiling. She is quite fantastic. Such a sweetheart,’ Updegrove said.

Charles said his girlfriend had booked his flight online from Iowa back to New Jersey on Allegiant airlines. She had also paid the $50 fare for the dog to fly, but was not aware of everything else that was required of him before boarding.

He also said said that he had not yet told his girlfriend what had happened to Stella. 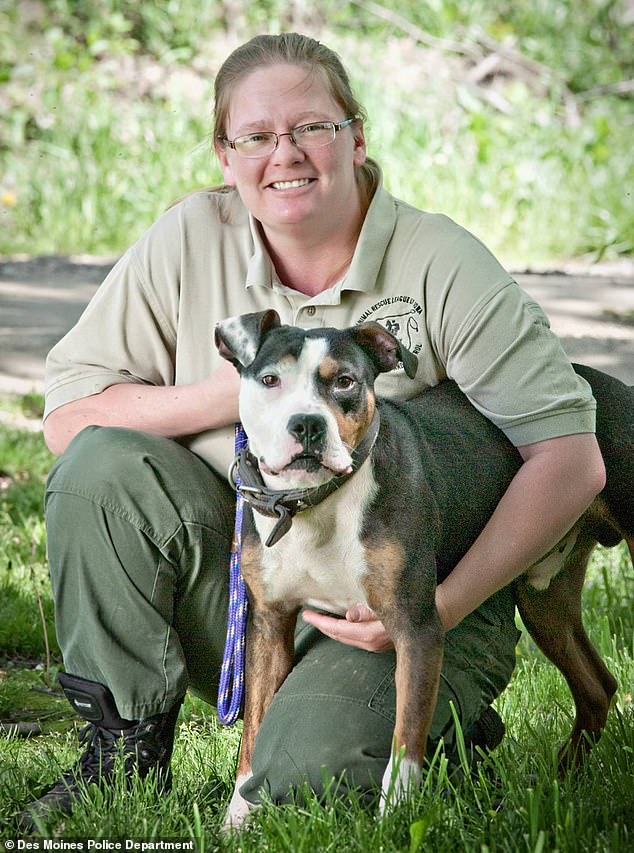 Tina Updegrove told DailyMail.com exclusively that she had been trying to contact the dog’s owner since Thursday. She said the airport staff gave had given her a blanket and plenty of love until she was able to take the puppy to the shelter

‘Everyday she asks for it. She didn’t know I left her at the airport. She would kick me out if she knew.’

Charles said he moved to Iowa in April and was flying home to New Jersey after he said he was fired from his job. He purchased the seven-month-old dog from a friend in July.

He said his girlfriend and his one-year-old daughter had traveled back to New Jersey without him days prior, and that his plan was to meet them back in the Garden State with his pup Stella.

Updegrove said she had been trying to contact Charles since the ordeal but he had not been returning her calls.

On Monday, when she finally did connect with him due to DailyMail.com intervening, she said that if he hadn’t responded she would have had to put out a warrant for his arrest and that was he facing charges of animal neglect and animal abandonment.

She said he confessed to her that he knew what he did was wrong.

‘He broke the law. He understood he did. If he flies to Des Moines and has gets into  interaction with police he can get arrested on those charges,’ she said. 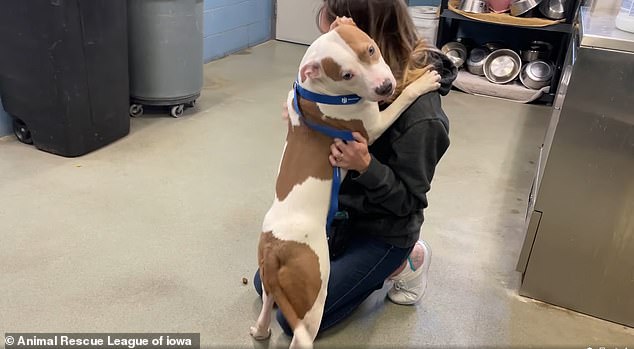 Charles said he moved to Iowa in April and was flying home to New Jersey after he said he was fired from his job. He purchased the seven-month-old dog from a friend in July 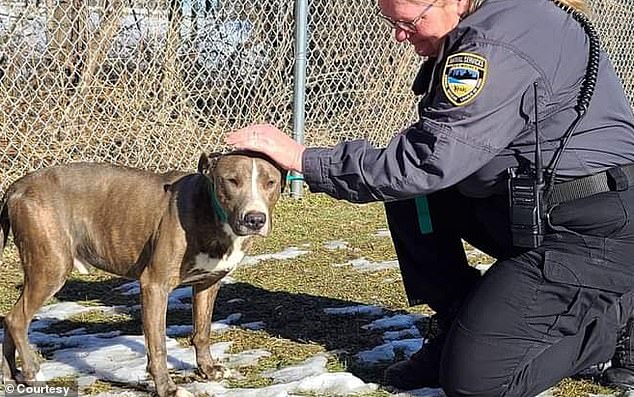 Updegrove seen here with a different abandoned dog that she said had running loose in a rural area of Des Moines, and had set up home in an abandoned trailer. She said she was able to track the dog and was able to capture him, and named him Saylor. He has since been adopted 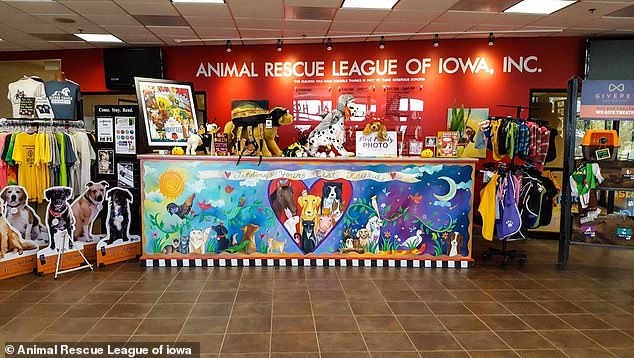 Stella is being cared for at the Animal Rescue League of Iowa. She will be spayed and evaluated before she is placed in her forever home. Her former owner said that Stella is good with children and around other dogs

She said he can fly back to Des Moines and face the judge. ‘If he pleads guilty then he will have to pay a fine,’ Updegrove said, ‘but if he pleads not guilty he will most likely have a trial.’

In the meantime, she said Stella is going to be getting spayed and will be put for adoption.

‘He verbally relinquished Stella. I told him the dog is doing well and happy and he gave me permission to find the dog a new home.’

Charles also told DailyMail.com that ‘he knows he made the wrong decision.’ He also said he finally told his girlfriend what had happened to their Stella.

‘She was angry but now things are okay. She just wants me to get another dog.’