NSW Police have charged a man with three counts of murder after a fatal boarding house fire in Newtown on Tuesday.

Three men died as a result of the fire and police have “serious concerns” for a fourth man.

He has since been charged with three counts of murder and one count of destroying property.

He was refused bail and will appear at Central Local Court on Wednesday.

There were at least 11 residents in the building, all aged between their 40s and 80s, when the fire began. 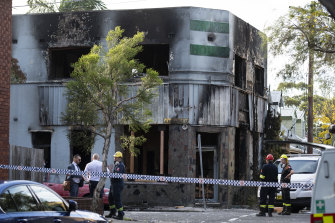 Fire crews were working to stabilise the building on Tuesday afternoon. Credit:Wolter Peeters

A man in his 80s, known to locals as Ronnie, remains in a critical condition after he was forced to jump from the building, causing serious leg injuries. Police said he had a heart attack upon arrival at the hospital.

Another man remains in a stable condition at Royal Prince Alfred Hospital while a third man, who was taken to St Vincent’s Hospital, has since been released.

Boarding house resident Craig Hopper fled his room on the first floor after he was woken by a “massive bang”.

“I’ve never experienced a bomb going off, but bloody hell. Shit came down. It was bloody smoky, it was dense. I had to hold my breath and scooch down the stairs. I ran like a bejesus.”

Mr Hopper saw the elderly man who had jumped out of the window lying on the ground with his pants on fire. Another man, whose room was on the ground floor, was “blown through the window” by the force of the explosion.

NSW Fire and Rescue Superintendent Adam Dewberry told 2GB on Tuesday morning it took about two hours to get the fire under control.

“[Firefighters arriving at the scene] found a very, very intense fire; very intense flames coming out of the first and second levels,” he said.

Residents of surrounding properties were also forced to evacuate their homes due to the instability of the boarding house after the fire.