A man has been arrested in North Queensland while allegedly trying to flee the country after a drug drop gone wrong in Newcastle this week.

On Monday, emergency services were called to the Hunter River following reports a diver had washed up on the shore unconscious.

Upon arrival, police found more than $20 million of cocaine in the water. Passers-by and paramedics performed CPR on the man, but he died at the scene.

Investigations into his death were launched and police arresting a 62-year-old man in North Queensland on Wednesday. Police believe he was trying to board a plane to Singapore.

He was taken to Cairns watch house and charged with importing a large commercial quantity of a border controlled drug and large commercial drug supply. He is due to appear in Cairns Magistrates Court on Thursday.

NSW Police detectives are travelling to Queensland to seek his extradition. 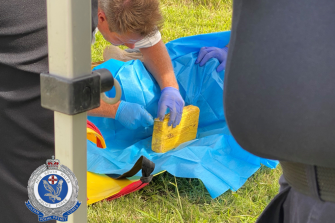 Police found more than 50 kilograms of cocaine in the water near the man’s body.Credit:NSW Police

Earlier this week, police said they believed the death of the diver was linked to the arrival on Sunday afternoon of the bulk carrier ship Areti, which investigators believe brought more than 50 kilograms of cocaine from Argentina into the Port of Newcastle.

On Monday, Police Detective Superintendent Robert Critchlow said that early investigations suggested at least two other men were involved in bringing the drugs from ship to shore.

“It’s very concerning that this man has been left for dead basically, either to die, or, when he did die, these people fled. It’s quite disgusting,” Critchlow said.

Two small vessels were seen near the ship about midnight on Sunday, police say; an inflatable dinghy and a five-metre aluminium Quintrex runabout with a green stripe.

“To put on a shipment of this scale is quite a complicated arrangement, and they are very, very professional,” he said.