‘I was very convincing’: Academic who detransitioned four years after living as Rachel says he was ‘hurtled through the system’ and would never have changed gender if he was assessed properly by therapists

An academic who detransitioned after regretting painful sex swap surgery claims he was ‘hurtled’ through the process and would never have gone through with it if therapists had addressed his traumatic past.

Criminologist Richard Hoskins, 56, was sexually abused as a child and suffered the earth-shattering loss of three of his children.

He started exploring the idea of changing his gender after the death of his third child and the breakdown of his second marriage, buying illegal hormones off the Internet in 2014.

Just a few weeks later he was in what he calls the ‘NHS gender identity machine’ and was being fast tracked through a process that usually takes years.

He flew to Thailand to have operations to remove his testicles and reconstruct his face to look more like ‘Rachel’ and less like Richard.

But when he returned to the UK and the Health Service offered him surgery to fully transition, he started to doubt everything.

He says he soon realised he was ‘using gender transition to escape his past’ and claims he regrets his operations ‘every day’.

Speaking on Victoria Derbyshire today, he said: ‘For the sake of the nation’s sanity, we first need to explore if something else is going on before people transition.’ 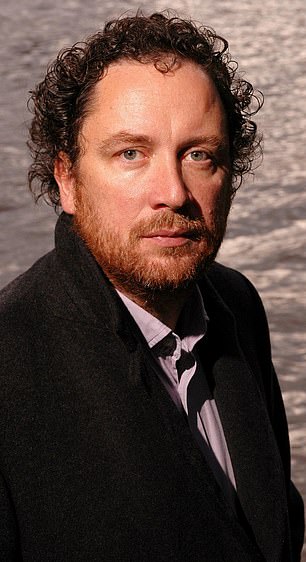 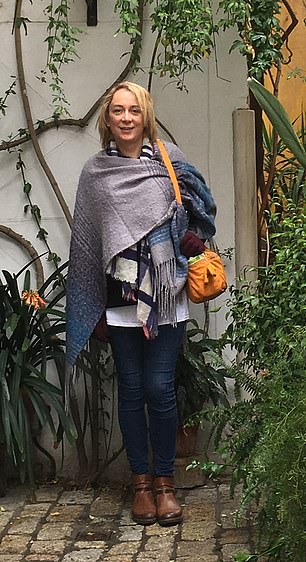 Richard Hoskins, 56, (pictured before surgery or hormones left) lived as Rachel (right) for four years but says he now regrets transitioning into a woman

After taking powerful testosterone blockers and oestrogen he went to his GP, who referred him to a Gender Identity Clinic (GIC) within two weeks, he told the BBC.

He said: ‘I went to the GP who felt sorry for me. They referred me to the GIC, which usually takes the best part of a year. But I saw my first consultant in two weeks, which is incredible.’

Quizzed on why he was referred so quickly, he added: ‘They knew I was self-prescribing and I needed help.

‘But another theory is that I’m highly educated, I had done my research and I was very convincing. If that’s the truth, it’s highly disturbing.’

He said that soon after he returned from Thailand, where he underwent a number of gruelling procedures, he was being offered vaginoplasty, the operation that turns penises into vaginas, on the NHS.

Mr Hoskins said: ‘The NHS offered me full construction of a vagina from my penis.

‘When that letter landed on my doormat it was a very fast process. I was due to go to hospital in a couple of months’ time. That was the first moment of absolute doubt. 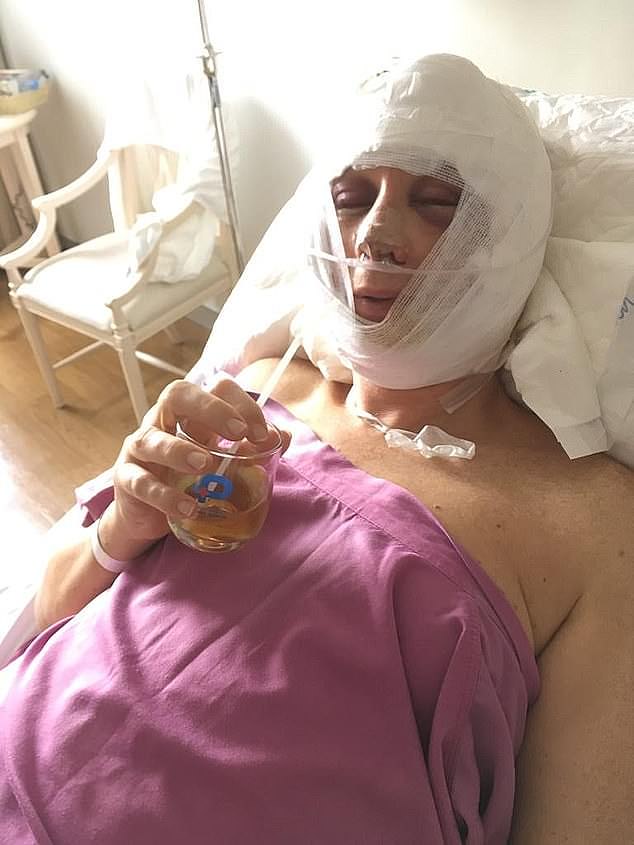 ‘I had started to question things from around four weeks earlier. I went to see a gender psychotherapist and she said to me, what pain are you carrying?

‘It was a life-changing, jaw dropping moment.’

He told the BBC he did have counselling on the NHS, but it was only three sessions, which he maintains only focused on gender dysphoria – not any other underlying issues.

Mr Hoskins said: ‘It was the first time anybody had stopped and asked what is going on underneath the surface.

‘They are only focused on the gender issue. They do ask for your back story, but they didn’t address my painful past.

‘All they wanted to talk about was gender dysphoria.’ 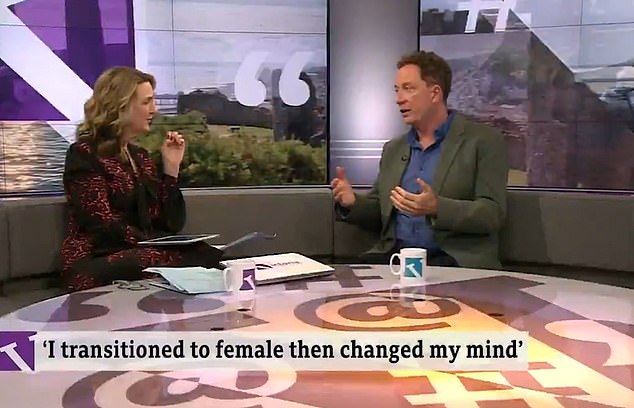 Speaking on Victoria Derybyshire today, he said: ‘For the sake of the nation’s sanity, we first need to explore if something else is going on before people transition.’

The 56-year-old said that had he done his two years of counselling for post-traumatic stress disorder before he started his journey to become Rachel, he would not have gone through with it.

‘I was escaping my pain and my past. I had gone through extreme trauma, but PTSD switches off the normal ways in which we analyse things. 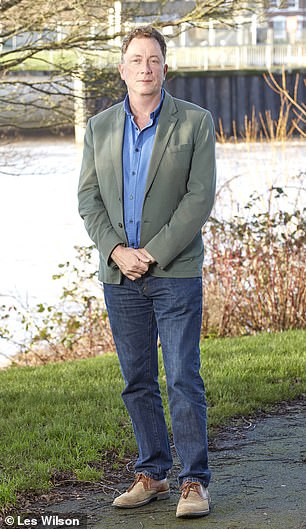 Mr Hoskins (pictured earlier this month said: ‘I went to the GP who felt sorry for me. They referred me to the GIC, which usually takes the best part of a year. But I saw my first consultant in two weeks, which is incredible.’

He added: ‘I’m saying, let’s pause the process, let’s slow it down.

‘I have a lot of trans friends who now regret transitioning.’

Asked whether he regrets transitioning, he said: ‘Absolutely. Every day.

‘I have made irreversible changes. I have no naturally-occurring hormones.

‘I have breasts. I can’t go outside in a T-shirt. I still can’t feel my skull in some places.

‘But I am lucky to be alive. I’ve been through hell but I do believe it’s possible to live in your own skin and be happy again.’

Mr Hoskins’ trauma began in his childhood when one of his teachers got a 10-year prison sentence for sexual abuse.

He says it ‘ripped’ his childhood apart.

Then, when he was working in the Congo his twins fell ill and died. His marriage to their mother later ended.

In October 2009 in Weston-Super-Mare, his 19-year-old son David climbed a 65ft electricity pylon and came into contact with a 33,000-volt cable.

He sat at his bedside for 42 days as his son slowly succumbed to horrendous burns.

He died on December 4 2009 after Mr Hoskins left his then-wife to agree to his life-support being switched off.

Reflecting on his past, he said today: ‘I should have had weekly therapy. I know now.

‘I suffered the deaths of three children and sexual abuse as a child. I was in deep, deep pain. 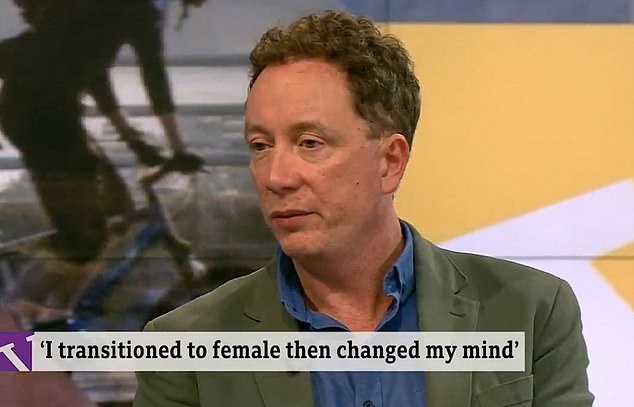 He told the BBC he did have counselling on the NHS, but it was only three sessions, which he maintains only focused on gender dysphoria – not any other underlying issues

‘And I do think a lot of people are using gender transition to escape their identity.

‘There may be other issues, certainly in the case of children.

‘If children are saying they want a different identity, we have to explore underneath.

‘For the sake of the nation’s sanity and their sanity, we first need to explore is there something else going on.

Do we need to offer them full extensive therapy first?

‘The highest rate of suicide of any mental health issue is those who believe they have gender dysphoria.

‘That alone should say is it gender dysphoria or is it another issue?’

Nottinghamshire Healthcare said in a statement: ‘We are unable to comment on individual cases due to patient confidentiality however, we follow national and international guidance and all patients undergo a comprehensive assessment to establish eligibility for physical interventions and to ensure that they are fully aware of the complexities surrounding medical transition.’