London: French President Emmanuel Macron fears a "collective betrayal" threatens to stoke a new civil war in Lebanon, as Australia's top representative in the fragile country urges its leaders to put self-interest aside to avoid a humanitarian catastrophe.

A visibly angry Macron convened a special press conference to lash the Lebanese political establishment for failing to embrace urgent reforms in the wake of last month's deadly explosion in the capital Beirut.

"I'm ashamed of your leaders," he said. "The failure is theirs, the responsibility is theirs." 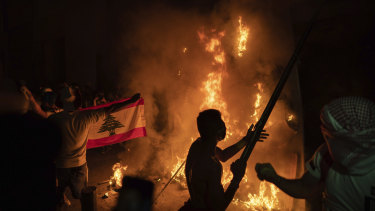 Anti-government protesters burn a barricade next to a wall installed by security forces to block access to Beirut’s Parliament building.Credit:AP

Grindlay called for an urgent International Monetary Fund assistance package but agreed with Macron and other world leaders that it should be conditional on Lebanese political leaders committing to a reform agenda in the corruption-plagued country.

"Australia supports any constructive international support for Lebanon, and Macron's focus has been valued here by the Lebanese people who see it as a way of encouraging this reform," she said.

"But reforms need to happen with or without an international assistance package. These are not new issues – these are known issues and now they've just reached a crisis point."

Australia donated $5 million in aid in the wake of last month's explosion and will be invited to attend a new international "pledging" conference in October. 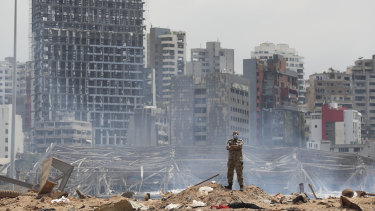 A soldier stands at the devastated site of the explosion in the Port of Beirut, Lebanon.Credit:AP

An investigation is underway into why the stockpile of ammonium nitrate was allowed to be stored in the warehouse for up to six years, and what steps were taken to protect the public from the dangerous material.

"It's almost unbelievable," Grindlay said. "How could something of this magnitude be sitting so close to where people lived?

"Of course, people say now that they knew and they had raised concerns, but I’ve met a lot of people and in the time I've been here, not a single person has ever raised with me and not a single person in the embassy – or any embassy – was aware that essentially a ticking time bomb was sitting 50 metres from a residential area."