Phone a pint! Loophole lets you text, call or email a pub to place an order – and today the Mail on Sunday urges readers to save YOUR local

From a cool, crisp lager on a summer’s day to a winter roast by a roaring fire, there’s no doubt that Britain’s pubs are, quite simply, the best in the world.

But publicans say they are ‘in real peril’ as they endure a damaging second lockdown.

Many thousands of venues have now devised ingenious methods to keep the tills ringing and are offering takeaway or delivery services after a Government concession last week.

The Campaign for Real Ale (CAMRA) predicts around one in ten venues will keep trading as customers are allowed to email, phone or text in their order in advance. 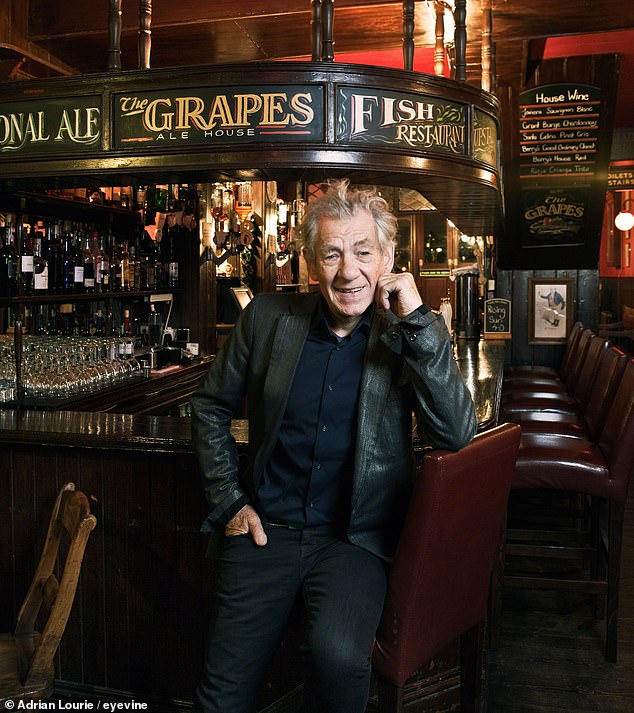 Sir Ian McKellen, pictured, has expressed concern about the future of the pub industry. His is the co-owner of the 500-year-old The Grapes, in Limehouse Reach in east London

The Mail on Sunday has spoken to dozens of England’s best pubs that are offering drinks and food to their very relieved communities.

And, in a clarion call, two of the nation’s most famous landlords have urged punters to get behind the initiative to help ensure their favourite local survives until Christmas. Sir Ian McKellen co-owns The Grapes pub which has stood on the pebbled Limehouse Reach in East London for almost 500 years. It was mentioned by diarist Samuel Pepys and Charles Dickens used it as the inspiration for the opening chapter of his novel Our Mutual Friend.

But even such a stellar-lineage does not guarantee its survival, and Sir Ian, 81, said the future was looking ‘dim’.

He told the MoS that he will be offering takeout, adding: ‘The Grapes has survived since the 16th Century but the virus doesn’t care. The best way to protect your local is to support it through the lockdown. The walk will do you good and the takeaway will be your reward.’

Model-turned-publican Jodie Kidd warned that ‘pubs are not going to survive multiple lockdowns’. The 42-year-old owner of The Half Moon pub in Kirdford, West Sussex, added: ‘It is a seriously worrying time and the whole industry is in real peril unless the Government can give us more support.

‘The decision to lower VAT to five per cent is helping, but we are pushing them to prolong this.

‘The knock-on effect of pub closures is devastating.

‘I saved this pub for the community and for the village. We sponsor the local cricket team and have WI meetings there every week. All the guys who work on the fields and the building sites come down at 5.30pm to get their pints before they go home. Like thousands of pubs across the country, it’s so much more than somewhere to go and have a pint – I urge people to do all they can to support them.’

The British Beer and Pub Association says 12,000 of Britain’s 47,000 pubs may face permanent closure without more Government support. Up and down the nation, pubs are battling to keep their connection to local communities and a few have started to branch out to food and local produce delivery too. 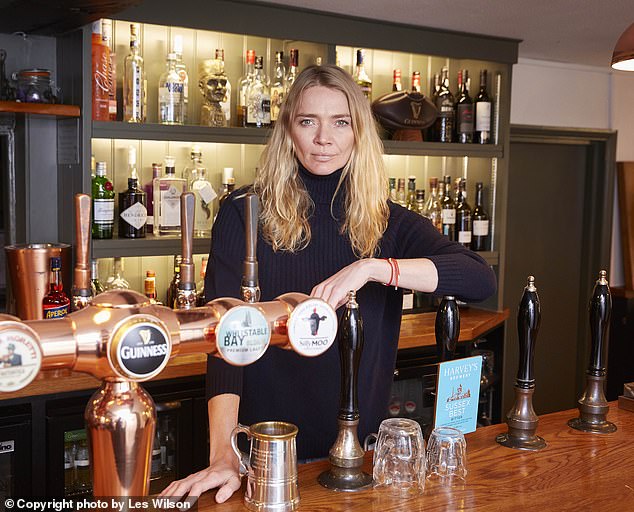 Model-turned-publican Jodie Kidd warned that ‘pubs are not going to survive multiple lockdowns’. The 42-year-old owner of The Half Moon pub in Kirdford, West Sussex, added: ‘It is a seriously worrying time and the whole industry is in real peril unless the Government can give us more support

The Roebuck Inn in Mobberley, Cheshire, is offering patrons traditional food and local ales as well as a ‘pub hub shop’ offering locally sourced meat, cheese, chutney and honey. Manager Kieran Garrihy, 27, said: ‘The support from the local community has been incredible. We had to furlough a few staff but some of us are working and we use a local taxi company for deliveries to keep them in business too.’

At the Balfour Arms in Sidmouth, Devon, landlady Deborah Potter and her team provided the vulnerable and elderly with pub dishes at cost price during the last lockdown.

Ms Potter, a 60-year-old former shoe designer, only took on the pub 12 months ago. Of her takeaway service, she said: ‘We just want to keep that connection to the local community.’ CAMRA has called on the Government to bring in a ‘comprehensive, long-term financial package’ to support pubs and breweries. Chairman Nik Antona added: ‘Without it, we risk seeing thousands closing their doors for good.’

This newspaper is calling on readers to support our great British pubs. Let them deliver your alcohol and ensure that come December, you still have a local to call a home-from-home.