The Hague: Five weeks after a pastor in the Netherlands started what seemed like a fairly ordinary church service, that service is still underway, a sort of pious filibuster relay that involves hundreds of people and shows no sign of stopping.

Bethel Church in The Hague is trying to prevent the deportation of an Armenian family that was denied asylum after almost nine years in the Netherlands, despite claims that they would be in danger if they returned to their homeland. 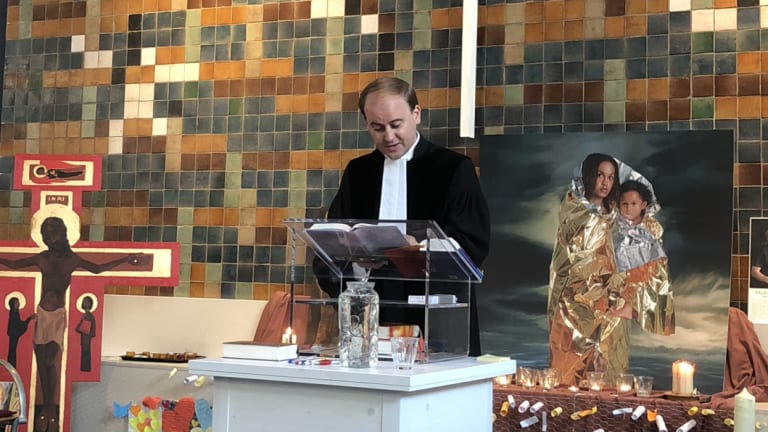 The Bethel Church in The Hague has been holding a non-stop service for five weeks to try to prevent the deportation of an Armenian family.Credit:Axel Wicke/New York Times

The church and its parent denomination, the Protestant Church in the Netherlands, are taking advantage of a Dutch law that, under most circumstances, prevents authorities from conducting operations in a place where a religious service is being held.

Their strategy is deceptively simple: Shelter the immigrant family in the church, and make sure a service is always being held.

At the outset, doing so was a serious logistical challenge, with a handful of people organising things and asking clergy members to take shifts and plug holes in the schedule. But as the effort has captured the nation's attention, it has also become steadily easier to manage.

"There are already more than 450 different priests, pastors, deacons, elders from around the country, every denomination, wanting to be put on the rotation to participate in this service," Axel Wicke, Bethel's pastor, said in an interview on Thursday.

There's even have a relay candle to formalise handovers.

"Even from abroad we've gotten help — there have been sermons held in English, French and German," he said. "It's quite moving to us. I often see a pastor handing over the service to another pastor of another denomination who they would ordinarily not have anything to do with, liturgically."

The Tamrazyan family — two parents and their three children, ages 21, 19 and 14 — have said that they left Armenia after receiving death threats over the father's political activism. The people working with the family declined to say what political causes he was involved in, or who might want to harm him; the organisation Freedom House rates Armenia, a small nation in the Caucasus, as "partly free," with democratic institutions but limited political freedom or freedom of expression.

Derk Stegeman, a Protestant Church pastor who has acted as a spokesman for the Tamrazyans, said they were talking with Dutch officials, holding out some hope that the government would reverse course.

Lennart Wegewijs, a spokesman for the Ministry of Justice and Security, which handles immigration matters, said he could not explain the government's position.

"Our policy is that we do not make any statements about individual cases," he said.

Church officials said the parents had not given interviews and wanted to be identified only by their surname, Tamrazyan, in part to protect family members still in Armenia from recriminations. But their daughter Hayarpi, the oldest child, has spoken publicly.

In a video she posted to Twitter in September, she asked people to appeal to the government on behalf of her family.

A court in the Netherlands granted the family asylum. Stegeman said the government appealed the decision but lost again, appealed that ruling and lost again, and only on its third try won a ruling that it could deport the Tamrazyans.

"They were in court procedures for almost six years," he said. "Now they're very thankful and grateful because now they feel safe."

Under Dutch law, the government can make exceptions to the usual restrictions on immigration for families with children who have lived in the Netherlands for five years or more. But the government, which rejects most requests for those exceptions, has declined to give one to the Armenian family.

The country's immigration and asylum policies have been a political flash point for years, and the conflicts have grown since the surge in migration to Europe in 2015 and 2016. After previous governments were accused of being too lenient, the government that formed last year took a tougher approach, drawing a different kind of criticism.

In September, it ordered the deportation to Armenia of two children who had lived most of their lives in the Netherlands and did not speak Armenian. After an outcry, they were given legal residency.

The family at Bethel Church first took shelter in a church in Katwijk, the coastal town where they lived. But that church did not have the resources to keep up a round-the-clock service, and they feared a raid by immigration agents. So the Tamrazyans accepted an invitation to use an apartment in Bethel Church, a red brick building nestled among low-rise apartment blocks.

They arrived at 1.30pm on October 26, Wicke said, and the marathon service began.