Killing machine: Lion stalks hyena and takes it down in seconds just yards from a safari party

These are the amazing scenes of a lioness tracking down an killing a hyena just a few yards from a South African safari party.

The dramatic incident happened at the Grootkolk Wilderness Camp in the Kgalagadi National park.

In the footage, the lion can be seen stalking up to the edge of some scrub land on the outskirts of the camp. 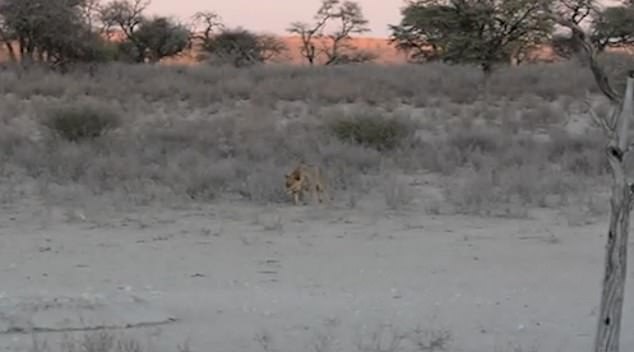 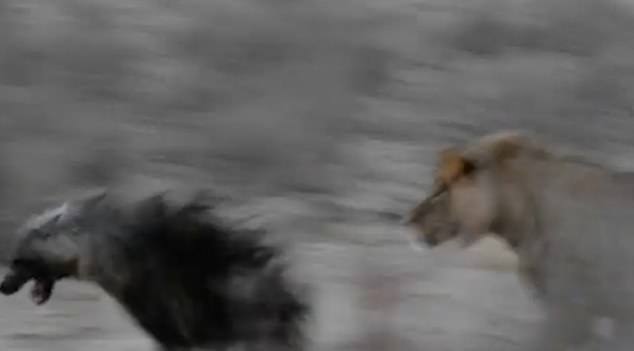 Moments later, the lion is just a few feet behind the hyena which is in mortal danger 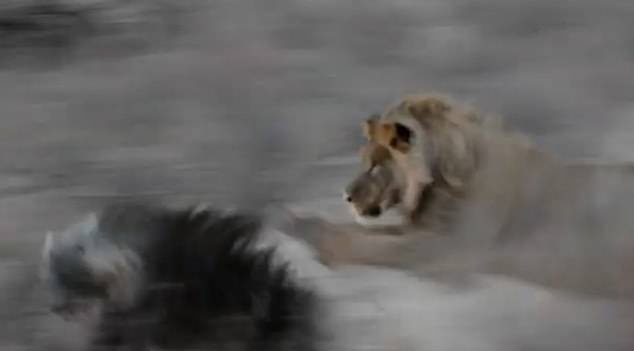 Once within striking range, the lion leaps on the hyena’s back and brings it to the ground

The hyena spots the lion at the last moment and attempts to run way, but the superior predator has the jump on him and bounds inexorably towards its lunch.

In less than five seconds the lion pounces on the hyena, bringing it down with its powerful paws before biting into the doomed animal’s neck.

One witness called Marc said: ‘This intense sighting was filmed at Grootkolk Wilderness Camp in the Kgalagadi National Park. I was on a wildlife holiday with my brother and it was his first time ever visiting the park. We had not been on a drive at all and the sighting happened right in front of us at the camp’s waterhole, which was also right in front of our accommodation.

‘We heard lions roaring quite close to our safari tent in the night and saw them outside next to the tents just after midnight, so we knew they were in the area. We got up to get ready for a drive from the camp and then made coffee.

‘I sat down to enjoy the early morning brew when my brother said: “Marc, please tell me that you’ve seen lions?”

According to the witness, the hyena approached a waterhole for a drink and was unaware of the lions in the background.

Marc said: ‘Getting to see a brown hyena is already rare in itself, but to see one in daylight was mind-blowing. As a wildlife guide, I thought that the hyena would move off as soon as it saw the lions, but boy was I wrong! 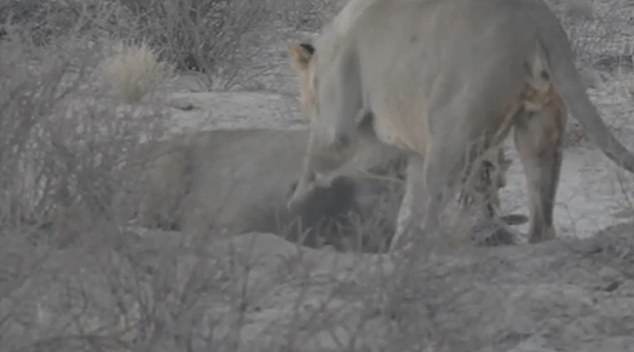 ‘The hyena kept approaching the waterhole for a drink, seemingly oblivious to the presence of the lions waiting for it. The lions, in turn, crouched down as they started getting ready to stalk and catch the hyena. With this, I rushed to get my camera, excited to be able to capture what would follow.

‘The hyena just reached the waterhole and spotted the lions, it suddenly turned around and started running away when the lions ran in pursuit, one male running directly towards the hyena.

‘Unfortunately, the hyena could not out-run its fate and was soon brought down by the lion. What made this even more memorable, was the fact that the hyena ran straight towards our tent, and by the time the lion brought it down, they were right in front of us – the only thing that separated us from them, was the one metre high, non-electric fence. This was absolutely amazing!’