If you’d been in Antarctica for 537 days, living with colleagues through 23 hours of darkness a day at minus 30 degrees in winter, what would you miss the most?

Fresh milk, for one thing, says David Knoff, sipping a magic (a double ristretto with steamed milk) on a balmy 16-degree day in Melbourne.

Some 5000 kilometres south of the nearest cow, Antarctic expeditioners use powdered milk (and grow kale hydroponically in a shipping container), although on the station where Knoff worked they did have a commercial-grade espresso machine at their disposal, one with the “flicky-flicky” grinder and “bang-bang” bin, as he describes it.

Coffee was the least of his concerns, though, back in June 2020. As the station leader at Davis, one of four permanent Australian stations in Antarctica and the sub-Antarctic, Knoff had been in charge of a team of nearly 100 scientists, medicos, tradies, chefs, pilots and others over summer and was heading a slimmed-down group of 24 through the gruelling winter. They had nearly come to the end of their year on the icy continent when the knock-on effects of the pandemic hit.

“I’ll get straight to point,” he told his team. “There are no flights this season. We’ll be staying another summer and heading home via ship in early 2021.” 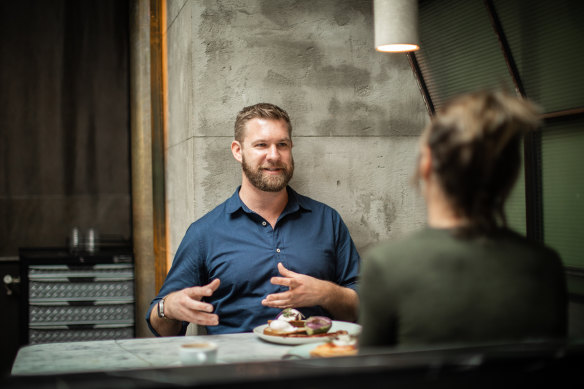 It’s a chilly winter day when we meet at St Ali, and Knoff’s wearing just a shirt with his jeans. Here is a man who, almost exactly two years earlier, was swimming in a hole in metre-thick ice in shorts, trainers and gloves (“so our skin wouldn’t stick to the metal ladder”); a man who survived yanking out his neck hairs and some of his beard when they froze to his neck buff one day (“It hurt,” he laughs).

Does he roll his eyes when he hears talk of polar vortexes back home? “Not at all,” he says. “Down there it’s such a dry cold. If you get caught out in the rain on a stormy Melbourne day, and you’re soaking wet and there’s blustery winds as you come around a corner on Collins Street, that certainly still gets me – because most of the time you’re not prepared for it, whereas in Antarctica you’re generally over-prepared and you end up overheating.”

As it turned out, Knoff’s team ended up staying in Antarctica longer than any in modern history. When he finally got home to bayside Melbourne he wrote an account of their adventures, 537 Days of Winter, and today he is mid-publicity tour.

With the Arctic Circle a trendy locale for so many TV dramas, surely Antarctica should be in the frame – has Netflix been in touch yet? Knoff jokes that if anyone was going to play him it’d be Chris Hemsworth – he’s been ribbed about the resemblance before. Frankly, it’s no stretch to imagine the star from Phillip Island (who’s also 190 centimetres tall) taking on the role. Knoff’s account is a cracker, jam-packed with high drama and the gamut of human behaviour that only isolation and pressure can elicit – “they call it the A-factor, the Antarctic factor,” he says, “that people will just do slightly different things.”

“The human fight-or-flight response is a really, really complex and interesting topic.”

How, for example, to tackle the case of the mystery offender who explodes a burrito in a microwave one night, drops it on the floor of the communal kitchen then covers it with a tea towel?

In his book, Knoff recounts his management approach. “Senor Burrito,” he says to assembled colleagues, “I ask not that you identify yourself to the masses but that you apologise to the chef who had to clean up your mess at 4am.” The apology was duly given.

How to help expeditioners process their nervous reactions after a shipboard fireball erupts as they finally sail home across the Southern Ocean? Well, Knoff offers to share with them what he’s gleaned about fear. As a 22-year-old in the Australian Army in the Solomon Islands, the platoon he was leading was involved in an operation “straight out of the infantry tactics handbook”.

“It was the dream of every young lieutenant to navigate their platoon through pitch-dark jungle … and pounce,” he writes. So he’s confused when he throws up. “The human fight-or-flight response is a really, really complex and interesting topic,” he says over lunch, “that you never fully understand until you’ve felt it and seen it. And then, the minute you’ve had one of those experiences, forever will you understand what’s going to happen when there is a crisis or when you’re pushed to the limit.” 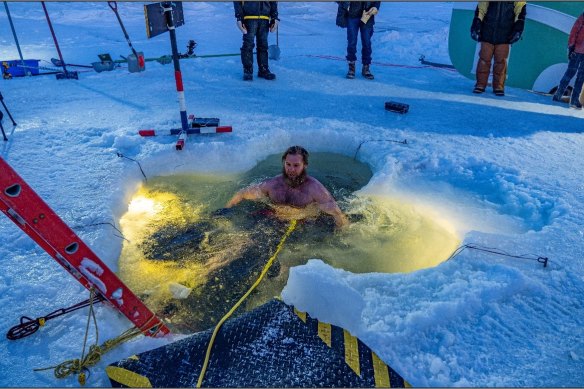 In Antarctica, Knoff’s limits are tested as he seeks to lead a bunch of people from various work “gangs” marooned on the world’s least liveable continent. “Mathematically, it doesn’t look that bad,” he says of the six-month “extension”. And practically, the station had enough food for another year (and enough toilet paper for five, says Knoff, adding he’s often asked). “But it’s the same as if you’re running a marathon and at the 35-kilometre mark, when your ankles are killing you, your knees are gone, your heart rate’s skyrocketing, you’re falling apart … you get told ‘It’s actually now an ultra-marathon, you’ll be running 70km’.”

Knoff came well-equipped for the long haul. After the army he served as a diplomat, including in Iraq, where he was embedded with Australian and US troops helping the Iraqis fight IS. Not only was he was able to be diplomatic when things got testy, but he understood both Australia’s geopolitical role in Antarctica and the complex treaty system by which countries co-operate in the region.

It was on Knoff’s first posting, in Pakistan’s capital Islamabad, that the seed was planted to head for Antarctica – by then high commissioner Peter Heyward, who had worked with the Antarctic Division. He spotted a map of the continent that Knoff had found when rearranging his office and hung on the wall. “That’s an interesting map,” Heyward said. “Have you been south?”

Some people are happy to do a desk job – not Knoff. He credits his childhood in suburban Glen Waverley with having “set the tone that work’s not a job – it’s the life”. During school breaks, he and his brother and sister pitched in at his parents’ automotive parts business. On family holidays his father, Bruce, an early adopter of mobile phones and the internet, would dial in to work.

“Our family was the business,” says Knoff. He dedicates 537 Days to them, including his two young nieces, and particularly Bruce, who died of a heart attack when Knoff was 13. “It aged us quicker than the average teenager,” he says. “You just didn’t have the ability to be a pain in the arse when you’ve only got one parent who’s trying to run a business and raise three kids. We just became independent. You start doing your own thing.”

As Knoff’s lunch arrives – avocado and poached eggs, both of which he also missed when he was down south – we talk about the night he delivered news of the extension to his polar colleagues. By coincidence, the movie they then watched together was The Martian, about an astronaut who gets left behind on Mars (and tries to grow greens in a hydroponic tent). “We all just sat there laughing, going ‘This is us!’ But, thankfully, there were 24 of us, not one.” 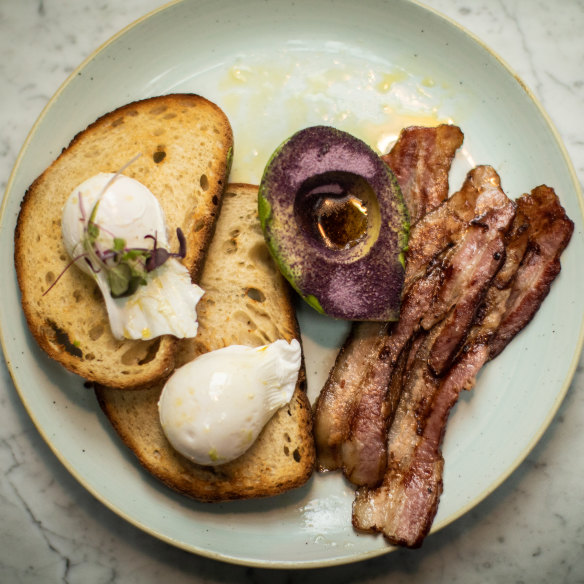 Knoff’s lunch: he missed fresh eggs and avocado in Antarctica. This avocado is sprinkled with purple powdered fermented cabbage.Credit:The Age

The cast of characters in the book includes Knoff’s steadfast deputy, Rhonda, a “no-nonsense” chef from New Zealand who has run mining camps as well as kitchens; and the trusty Doc, who devises a “wellness week” as a “mood lifter” and is part of the team helping Knoff pull off a hair-raising medical evacuation as bad weather threatens, involving a helicopter from a Chinese icebreaker, a US Basler aircraft, an Australian Airbus A319 and five runway builders working hell for leather at an airfield called Whoop Whoop.

Knoff says most expeditioners coped well with their “ultra-marathon”. What qualities helped the most?

“I found it was expeditioners that had a pure sense of adventure,” he says, “and were signing up to be part of that history of Antarctic exploration. Now, in the modern days, we’re not exploring, we’re running the place and doing science, but you’re part of that legacy. And that legacy involved uncertainty and ships changing course and getting stranded on Elephant Island. And I wanted to be part of that history, as did I think everyone that signs up to the program at some level – you’re joining that club.”

In 1916, the explorer Ernest Shackleton and his crew were stuck on Elephant Island after their ship was crushed by ice and sank. In a famous display of grit, he and a handful of his men then rowed over open seas to the island of South Georgia to raise the alarm. Everyone was saved. 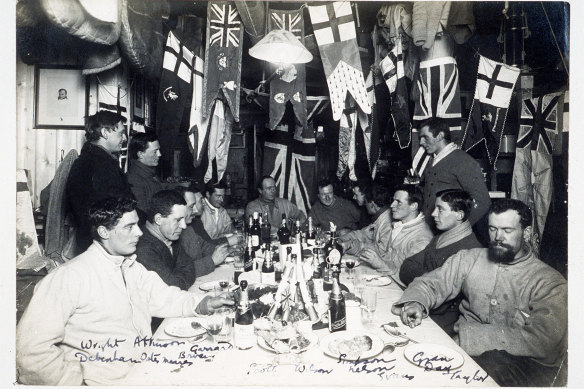 Explorer Robert Scott and his team enjoy a mid-winter dinner in June 1911.Credit:Fairfax

Science has been part of Antarctic exploration from the start. In 1912, for example, when the bodies of Robert Falcon Scott and two of his team were found in a tent – perished on their return from the South Pole – with them were several kilos of rock fossils they’d collected. The fossils turned out to be the long-extinct Glossopteris indica plant, found in other southern continents, suggesting Antarctica had been part of the ancient super-continent Gondwana. “Near some of the Australian stations there are preserves of ancient megafauna fossils,” says Knoff. “I’ve never seen them up close, I’d love to see what a fossilised giant penguin might look like.”

But it’s Antarctic moss that blows Knoff away. Australian scientists have found it in rocky areas once too cold to support plant life, more evidence of the continent’s warming. “It’s the simplicity of moss and its ability to adapt to the climate in Antarctica that, for me, was a smoking gun in the climate change debate,” he writes.

Outer space is another big focus, too, not only for scientists – “ourselves, the Americans, the Chinese, the Russians, anyone’s who’s got a station down there, they’re capitalising on that clear shot up in space” – but for the expeditioners too. “Everyone down there was an amateur photographer,” says Knoff. “So we’d be getting out seeing the Southern Lights and taking photos of the Milky Way. It did mean, occasionally, if there was a really good aurora the night before there’d be a lot of sleepy eyes.” 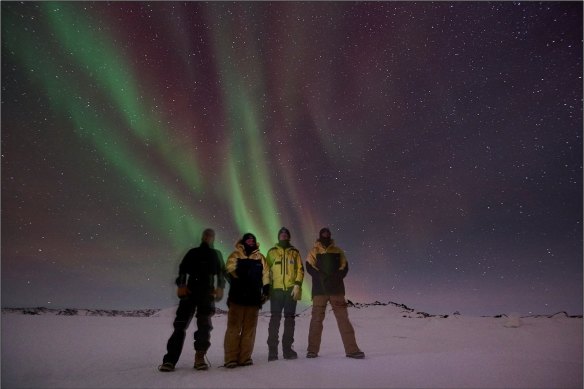 Knoff (far right) with colleagues in Antarctica. “Winter field trip under the southern lights, temperature around minus 20 degrees hence every layer of clothing required!”

In fact, nearly half of Knoff’s team had wanted to be astronauts when they were growing up. “We love space. We had a little space club where we’d get together and watch launches on YouTube. We watched the Perseverance Rover take off and then we watched it land [on Mars] nine months later.”

This gives you some clue as to why, even after those epic 537 days, Knoff returned to Antarctica as a voyage leader in February, even if he admits another winter there isn’t high on his bucket list. “But a number of my team already went back and wintered again,” he says. “It’s an addictive place to go.”

537 Days of Winter by David Knoff (Affirm Press) is in bookstores now.