People have started to look at Professor Nancy Baxter strangely when she meets their attempt at a handshake with an elbow bump.

“There’s a sense of ‘we’re back to normal, we don’t deal with all this COVID stuff’,” the clinical epidemiologist says. 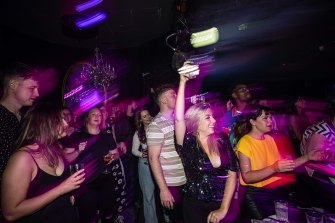 Australians are in a “honeymoon” period as the absence of COVID-19 has allowed people to get up close.Credit:Meredith O’Shea

Australia hasn’t seen a significant outbreak of coronavirus since spring last year. In fact, some communities never have, and with just 22 people hospitalised with COVID-19 around the nation, the most tangible sign of the disease is often a bottle of hand sanitiser at the door of the supermarket or cafe.

However, this era is unlikely to last much longer.

The voices calling to open Australia to the rest of the world have been growing in prominence, and alongside it the threat of surprise outbreaks. Leading public health officials say there is little doubt that the nation will have to learn to live with COVID-19 in the years to come, once high levels of vaccination have been achieved.

“I talk about this as our honeymoon,” says Baxter, the head of Melbourne University’s School of Population & Global Health.

Baxter believes even in a best-case scenario, where very high rates of vaccination are achieved, there will still be people in intensive care with COVID-19, and with that worry for those who could be vulnerable, such as those undergoing chemotherapy.

“What you’re not going to get is waves of outbreak … it won’t be a big wave that shuts down the hospital for three months,” she says. “But it doesn’t mean that you won’t get cases.”

Other experts paint a range of similar scenarios, largely dependent on the success of vaccination efforts.

Associate Professor James Trauer, from Monash University’s School of Public Health and Preventative Medicine, says what will unfold in Australia will rely on how much immunity is built against the virus and how successful vaccines are at preventing transmission. A worst-case scenario is a disastrous third wave.

“We’re absolutely sitting ducks at the moment,” he says. “We’ve got this extremely high risk of huge explosive outbreaks, so people really need to go and get vaccinated.”

But if Australia’s vaccine coverage continues to rise, Trauer speculates inevitable outbreaks could be curtailed before they spiral out of control by simple public health measures such as social distancing and good hygiene, rather than punishing lockdowns.

He predicts face masks will be part of the Australian look for years to come, with people likely to reach for their face coverings as new outbreaks take hold, long after they have been vaccinated.

“There is a strong role for face masks to play for years to come, especially with our growing understanding that aerosol transmission is a major way this virus transmits,” he says. “If we can do the basic hygiene measures well, then that and getting vaccinated should be enough to stop us from having to close down the economy and society again.” 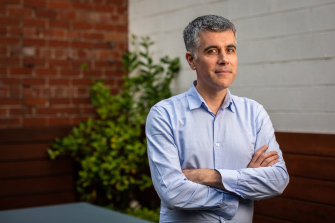 Baxter says there will also need to be a new focus on ventilation of offices and other buildings to reduce the risk of COVID-19 spreading through the air.

The idea that the virus will become a fixture of Australian life in the future is strongly supported by modelling from Sydney researchers led by computational epidemiologist Professor Mikhail Prokopenko.

The research found that Australia is unlikely to reach herd immunity — the point at which those who haven’t been vaccinated are largely shielded from catching the disease by those who have — with a mixed vaccine regime of the AstraZeneca and Pfizer jabs.

Prokopenko says even with 80 per cent of the adult population vaccinated, there would be millions of Australians unvaccinated and others who are vaccinated but can still transmit the virus, even when they don’t fall seriously ill themselves.

One of the reasons for this is because COVID-19 vaccines are estimated to block instances of people passing on the virus in some but not all cases (around 50 per cent).

He says that means outbreaks could still grow “to quite sizeable levels” requiring fresh social-distancing measures. In this high-vaccination scenario, he says these measures would likely not be as extreme as the national lockdown early last year, when pubs, clubs, gyms and cinemas closed, but could necessitate measures such as people working from home some of the time.

“We’re talking about outbreaks that could be happening simultaneously in many regions and many localities and many cities,” says the director of the Centre for Complex Systems at the University of Sydney.

The Murdoch Children’s Research Institute’s Professor Fiona Russell, a vaccine adviser to the World Health Organisation, says gradually waning immunity to the virus after infection or vaccination meant it was likely annual COVID-19 vaccinations will be required, much like the flu shot.

“The other important issue is not only our vaccine coverage but whether the vaccines we’re using actually cover the variants,” she says.

Australia is relying heavily on AstraZeneca to vaccinate its elderly and Russell says some of the population may require booster shots of an mRNA vaccine, such as Pfizer, as new strains of the virus evolve. This is because mRNA vaccines can be tweaked to adapt to new variants far more easily than conventional vaccines such as AstraZeneca’s.

The threat of escape

Of most concern is that some new variants of the virus appear to have what scientists call “immune escape”, meaning the virus can bypass existing immunity. It’s a phenomenon being observed in Israel, which has positioned itself as the unexpected poster child of vaccinations globally.

About 65 per cent of the adult population in Israel are now vaccinated against or have recovered from the coronavirus, a figure that climbs to 95 per cent in those aged over 50.

Epidemiologist Professor Nadav Davidovitch, director of the school of public health at Ben-Gurion University, says while widespread vaccination obliterated the country’s recent, disastrous wave, a small number of “silent” infections have been detected in people after they have been vaccinated.

The handful of infections have emerged mostly in people who only had their first dose of the Pfizer vaccine, he says.

To Davidovitch’s knowledge, none of these cases have died or been sick enough to be hospitalised. But worryingly, it appears in some cases, they may have transmitted the virus to others.

“We are learning more about this virus and the vaccines every day,” he says.

In a post-pandemic world, Trauer predicts, COVID-19 may follow a similar trajectory to endemic coronaviruses that preceded it.

“This is many years away, but the situation that we might end up in is a little bit more similar to the situation that we have with the other older coronaviruses that generally affect children,” he says. “It means we won’t have the situation where elderly people are encountering the virus for the first time and getting these really severe outcomes and dying.”

The head of Melbourne’s Peter Doherty Institute, Professor Sharon Lewin, believes it is impossible Australia can keep the door closed on COVID-19 forever. Her ideal alternative to “COVID zero” would see people still getting the virus but very few requiring hospitalisation.

Emerging data from Britain suggests the AstraZeneca and Pfizer vaccines cut the risk of contracting COVID-19 by as much as 70 per cent and dramatically protect against severe illness and death.

“Overall, the more people we have vaccinated the less opportunity there will be for the virus to transmit,” says Lewin. “What we really want to do is eliminate any possibility of people getting really sick and going to hospital.”

However, with only about 3.5 million vaccine doses distributed for a population of 25 million, and significant hesitancy detected among the public, Lewin cautions “we are a long way from being in that position”.

It’s estimated that to avoid a third wave of the virus, the nation would have to achieve vaccination rates of 70 per cent before COVID-19 was allowed to circulate in the community.

“I think we have the opportunity for the next five to 10 years to still be the country that’s able to manage this much better,” Baxter says. “But if we take the wrong steps, we have a third wave in Melbourne, and it’s not as bad as it would have been but it’s still not very good.”

Outbreaks of the virus in Victoria have resulted in 20,000 COVID-19 cases and 820 deaths. There have been 910 deaths nationwide.

The Austin Hospital’s intensive care unit, which was full of critically ill coronavirus patients last winter, is now overflowing with people recovering from postponed surgeries or delayed medical treatments, a legacy of the pandemic.

“We are in many respects the busiest we have ever been,” says ICU head Dr Stephen Warrillow.

“The confronting reality is that there will be COVID in the community for months and years to come. The ICU systems across the city are already so busy. Even small amounts of coronavirus transmission would have huge impacts on us.” 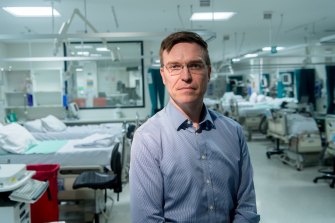 For Associate Professor Jason Trubiano, an infectious disease physician, the memories of 18-hour shifts swabbing hundreds of people a day and gently reassuring anxious, breathless patients in the COVID-19 ward are still raw.

“It felt like a tsunami, but now we realise it was only a ripple,” says Trubiano, who oversaw the screening clinic at the hospital during last year’s deadly wave. “Thinking back to it all makes me quite emotional.”

It took Trubiano months to adjust to walking past Pod C in the hospital in Melbourne’s north-east and not seeing beds full of seriously ill patients or the bright yellow signs on the window.

The thought of winter and a growing reluctance among Australians to get tested for flu-like symptoms makes him and his colleagues anxious. 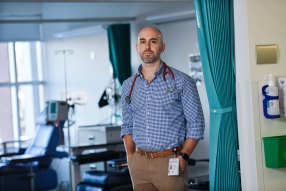 “I can’t count the number of people who have said to me recently they had a runny nose or a sore throat and I say to them, ‘well, did you get tested for COVID?’ and they haven’t,” he says.

“The complacency is extremely worrying. We must continue to test and vaccinate because without these two critical elements, we are very vulnerable for a third wave and this is something that is so completely avoidable.”