Legendary magician Roy Horn has died from coronavirus. He was 75.

Horn, one half of the longtime Las Vegas illusionist duo Siegfried & Roy, had tested positive for the coronavirus.

He died today at Mountain View Hospital because of complications related to COVID-19. 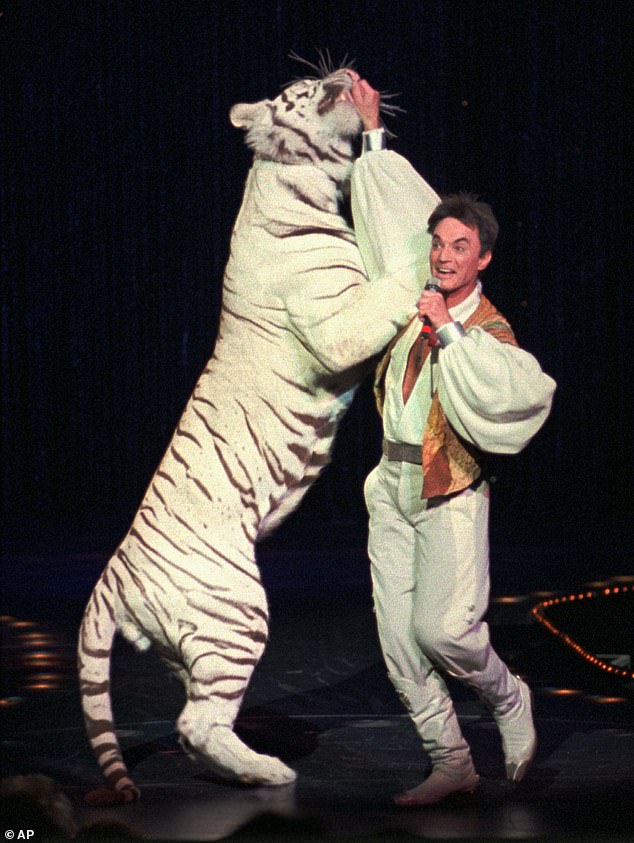 Roy Horn of Siegfried and Roy, has died weeks after testing positive for COVID-19

‘Today, the world has lost one of the greats of magic, but I have lost my best friend,’ Siegfried Fischbacher said in a statement.

‘From the moment we met, I knew Roy and I, together, would change the world. There could be no Siegfried without Roy, and no Roy without Siegfried.

‘Roy was a fighter his whole life including during these final days. I give my heartfelt appreciation to the team of doctors, nurses and staff at Mountain View Hospital who worked heroically against this insidious virus that ultimately took Roy’s life.’

Horn was severely injured by a tiger during a Siegfried & Roy performance at The Mirage hotel-casino in Las Vegas in 2003.

He had severe neck injuries, lost a lot of blood and later suffered a stroke. Horn underwent lengthy rehabilitation, but the attack ended the long-running Las Vegas Strip production after it Horn partially paralyzed.

The showmen met one another while working on a cruise ship in 1957.

The two – born in Germany as Siegfried Fischbacher and Uwe Ludwig Horn – made their first appearance in Las Vegas in 1967 and played at several different casinos, ultimately becoming the headlining act at the Mirage Resort and Casino in 1990.

Horn was credited with the idea of introducing an exotic animal – his pet cheetah – to the magic act. 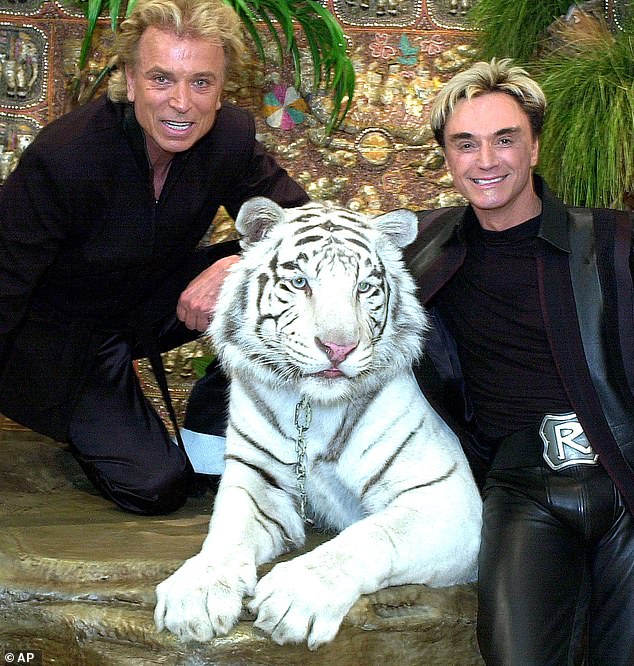 The two became an institution in Las Vegas, where their magic and artistry consistently attracted sellout crowds. The pair performed six shows a week, 44 weeks per year.

When they signed a lifetime contract with the Mirage in 2001, it was estimated they had performed 5,000 shows at the casino for 10 million fans since 1990 and had grossed more than $1 billion. That comes on top of thousands of shows at other venues in earlier years.

‘Throughout the history of Las Vegas, no artists have meant more to the development of Las Vegas´ global reputation as the entertainment capital of the world than Siegfried and Roy,’ Terry Lanni, chairman of MGM Mirage, the casino´s parent company, said after the attack. 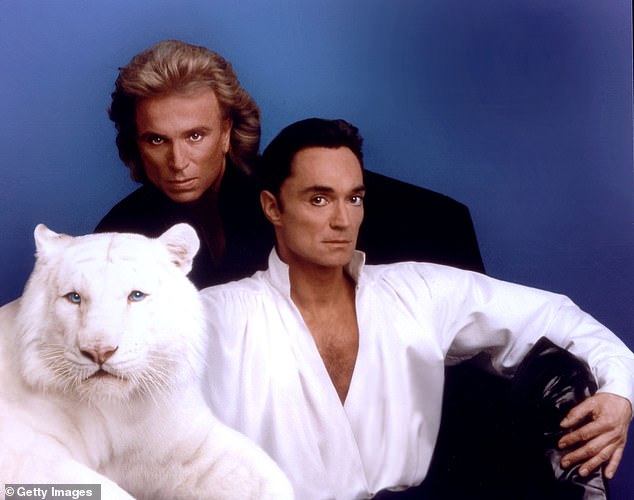 German-born Siegfried and Roy with their white tigers and magical illusions were one of Vegas’s most celebrated attractions, becoming headliners at the Mirage from 1990 to 2003

Siegfried & Roy´s show, incorporating animal antics and magic tricks, included about 20 white tigers and lions, the number varying depending on the night. The show also had other exotic animals, including an elephant.

‘Their show is so fast-paced the viewer has time only to gasp before the next dazzlement,’ a reviewer wrote in 1989 when they brought their act to New York.

‘A white car drives on stage – as Liberace used to do – bringing a mother white tiger and three cubs. Roy rides an elephant, which disappears, then reappears. At the end, a 650-pound white tiger climbs atop a globe. With Roy on his back, they´re pulled into the air.’

‘It´s a Las Vegas show and it´s nonstop entertainment. New Yorkers aren´t too sophisticated for this.’

A later spectacular developed for the Mirage opened with a flashy ‘Star Wars’ scenario and Horn and Fischbacher arriving in their own mini space capsules. Another segment had Horn sitting atop a 30-foot pyramid that was ‘destroyed’ by an explosion and fire, leaving him levitated high above the stage. 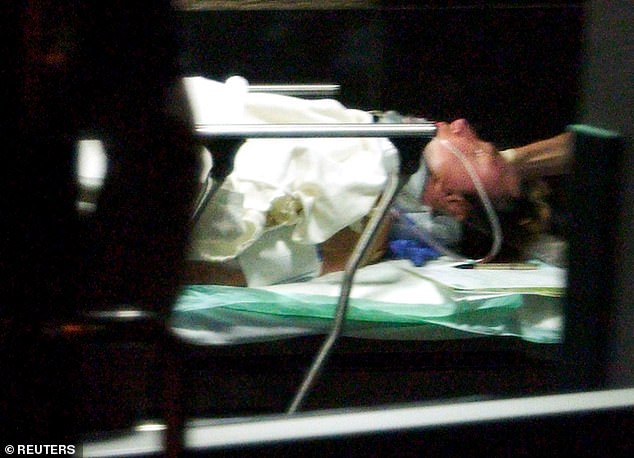 The showman was left partially paralyzed and with impaired speech following the incident in which he also suffered a stroke. He’s seen at the hospital after the attack on October 4, 2003

After Horn’s 2003 attack, the duo consistently claimed the cat had latched onto Horn as a way to protect the entertainer, after he had suffered a stroke and toppled over.

Horn was alone on stage with the tiger that it suddenly lunged at him.

Horn, who had turned 59 that day, had never been injured during a show before, ‘not a scratch, not by an animal,’ Bernie Yuman, the pair´s longtime manager, said at the time.

He said he thought Montecore, a 7-year-old male, got distracted by something in the audience and Horn was trying to calm him. Horn himself said later that he fainted and the tiger was trying to help him by dragging him offstage, though animal experts disputed that possibility. 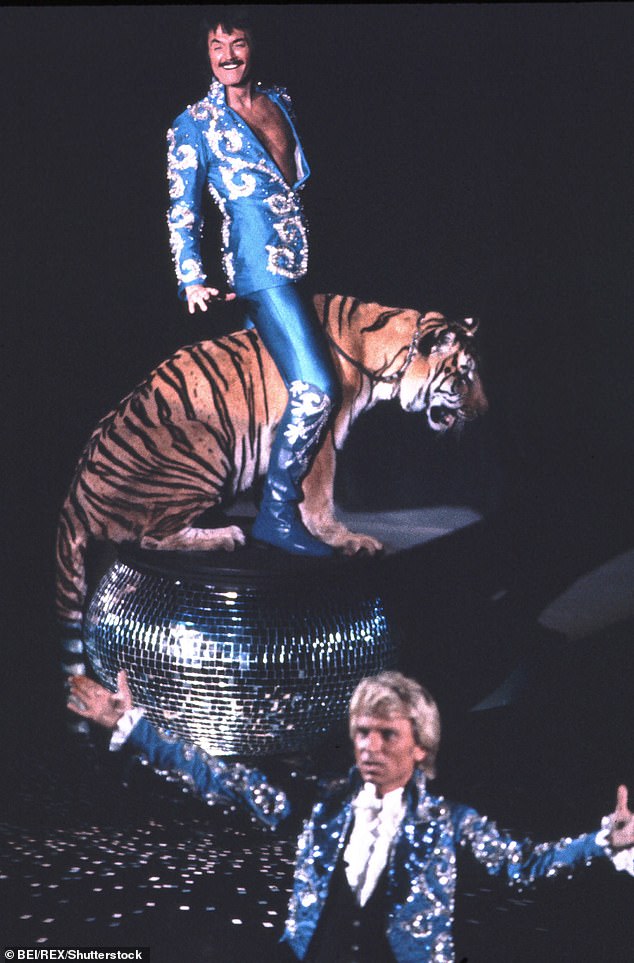 After Siegfried met Roy (pictured performing in 1983), they formed their animal and magic act and started on boats before moving to the European nightclub circuit. Once they incorporated tigers, promoter Tony Azzie asked them to come to Las Vegas in 1967

Horn also insisted the cat ‘saved his life’ by attempting to drag him to safety and begged for the cat not to be put down.

An investigation by the U.S. Department of Agriculture explored a variety of theories but was unable to reach a conclusion on what caused the tiger to attack. In its final report, the USDA also said the show´s producers had failed to protect the audience because there was no barrier separating the exotic animals from the crowd.

In October 2006, three years after the attack, Horn and Fischbacher attended their induction into the Las Vegas Walk of Stars. Horn´s speech was sluggish at times and he walked a bit slow, but he called the event ‘a deeply emotional experience.’

Throughout his recovery, Horn continued to make personal appearances and remained fond of fans.

In 2009, the duo returned to the stage one final time for a show benefiting the Cleveland Clinic’s Lou Ruvo Center for Brain Health in Las Vegas.

The pair were said to be working on a biopic to be released in the form of a multi-part docuseries in 2021. 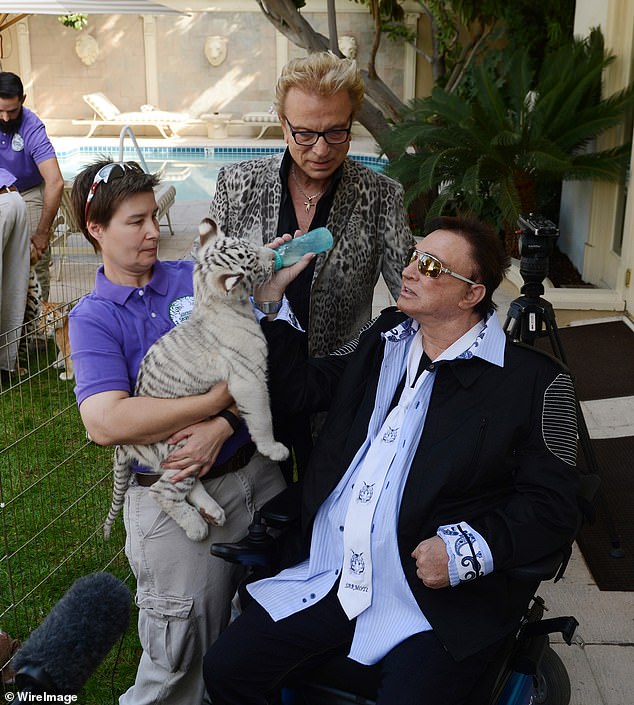 Siegfried Fischbacher and Roy Horn pictured at The Mirage Hotel in Las Vegas, in 2015. After the 2003 mauling, Horn was confined to a wheelchair 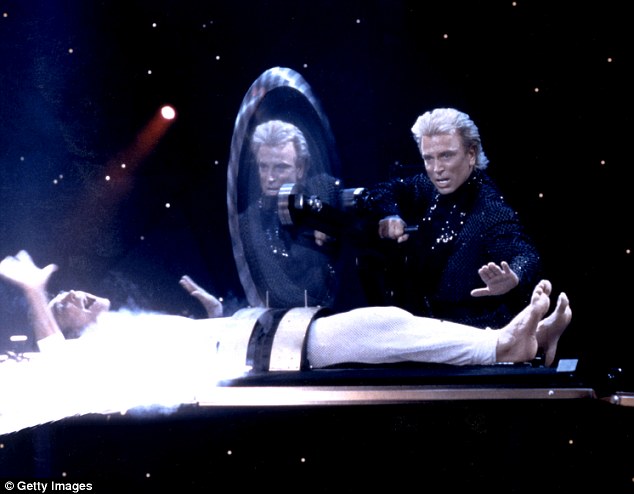 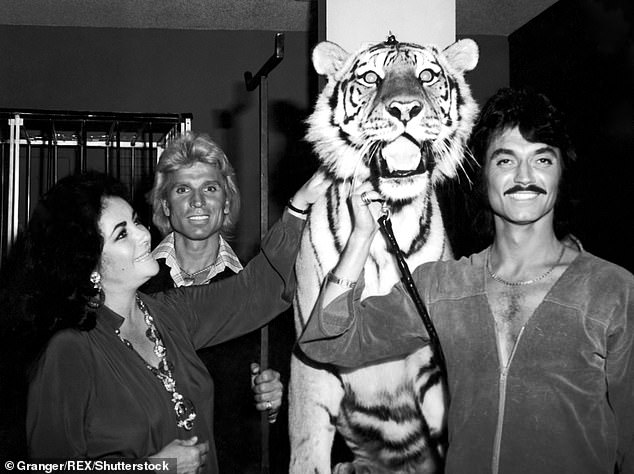 Siegfried and Roy, pictured in 1976 with Hollywood star Elizabeth Taylor, were said to be working on a biopic which is slated to be released in the form of a multi-part docuseries in 2021

Since Roy was mauled, Siegfried had dedicated his time and energy to making sure his showbusiness partner and best friend recovered.

After being grabbed round the throat by his beloved tiger while on stage, Roy was told he would never walk, talk or perform magic again.

But he defied all odds to make a remarkable recovery, despite having to have part of his brain cut away, suffering a crushed windpipe and being partially paralyzed, according to the Las Vegas Sun.

After a run of 30,000 shows that were watched by up to 400,000 people each year, the showmen decided to retire from their Las Vegas production after the attack in 2003. 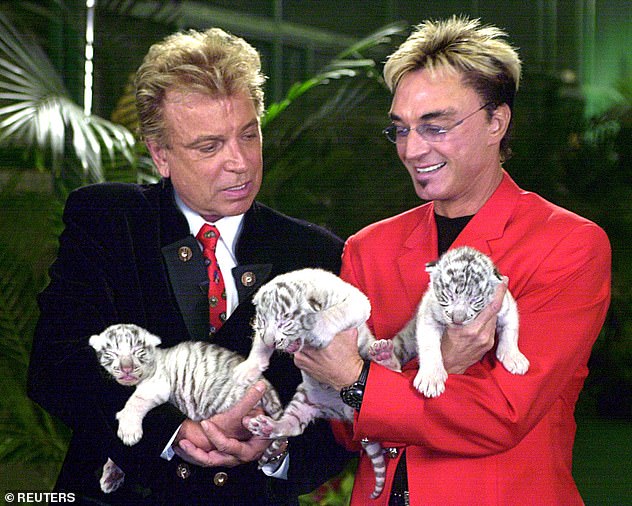 Horn was left with partial paralysis on the left side of his body and was confined to a wheelchair most of the time. The pair are pictures here in October 2002

The entertainment was ahead of its time for Las Vegas and came before large-scale shows became a staple on the strip.

‘It’s family entertainment. That’s what we started,’ Fischbacher said in a 2013 interview with Las Vegas Weekly.

‘These are big production shows now, but yeah, we came from nowhere. And when The Mirage became such a success, Steve Wynn knew how important entertainment was, and he knew how important Siegfried & Roy were. The show was sold out every night from the first night to the last.’

The show’s producer, Kenneth Feld of Feld Entertainment, told ABC’s 20/20 in September, ‘It was probably the most expensive show in the history of the world at the time it was built.’

Siegfried details his journey from Rosenheim, Germany to Las Vegas on his website.

He built his career from a $2 magic book, which caught his eye in 1947, before starting out performing tricks on the TS Bremen liner.

After meeting Roy, they formed their animal and magic act and started on boats before moving to the European nightclub circuit.

Once they incorporated tigers, promoter Tony Azzie asked them to come to Las Vegas in 1967.

The illusionists became popular in the 1970s, receiving their first star billing in 1978 as headliners of the Stardust´s ‘Lido de Paris.’ Their show ‘Beyond Belief’ opened in 1981 at the Frontier and played to thousands over seven years.

For more than 20 years, they were kings of the Strip earning tens of millions of dollars.

When Horn and Fischbacher became U.S. citizens in 1988, an elated Horn said, ‘Being an American means all the things we believe in.’

Horn once hand-fed a white lion cub born prematurely, starting with an eyedropper. But when a cub was donated to a zoo, Horn said he was heartbroken.

‘When you love something, the hardest thing is to let it go,’ he said. ‘But this is what Siegfried and Roy do. We live our dreams, and we fulfill our destiny.’

They returned to the stage in February 2009 for what was billed as their one and only comeback performance, to raise funds for the new Cleveland Clinic Lou Ruvo Center for Brain Health in Las Vegas.

The brief performance, which included Montecore, became the basis of an episode of the ABC television show 20/20.

In 2019, the two appeared together as surprise guests at the Vegas’s Keep Memory Alive’s 23rd annual Power of Love gala.

Funeral service will be private, with an expected public memorial.