Lady Gaga’s father has claimed that the two suspects who stole the singer’s dogs and shot their walker should be charged with assault and attempted murder.

Her identity and the location where the dogs were found won’t be disclosed for her safety and because of the ongoing investigation, the LAPD has said.

It is not known if she will receive the $500,000 reward that had been offered for the dogs.

Lady Gaga has not yet commented on the return of the dogs. 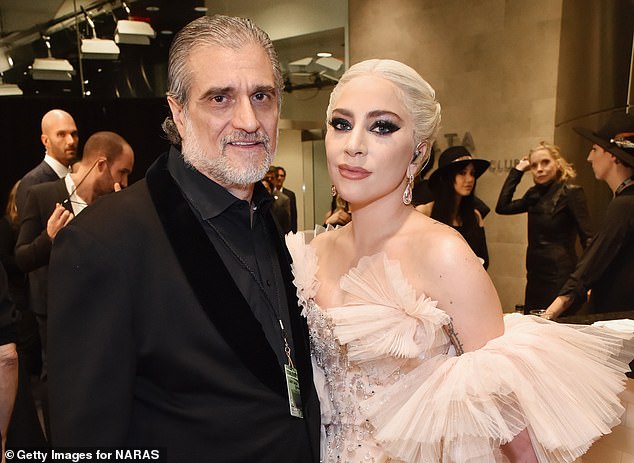 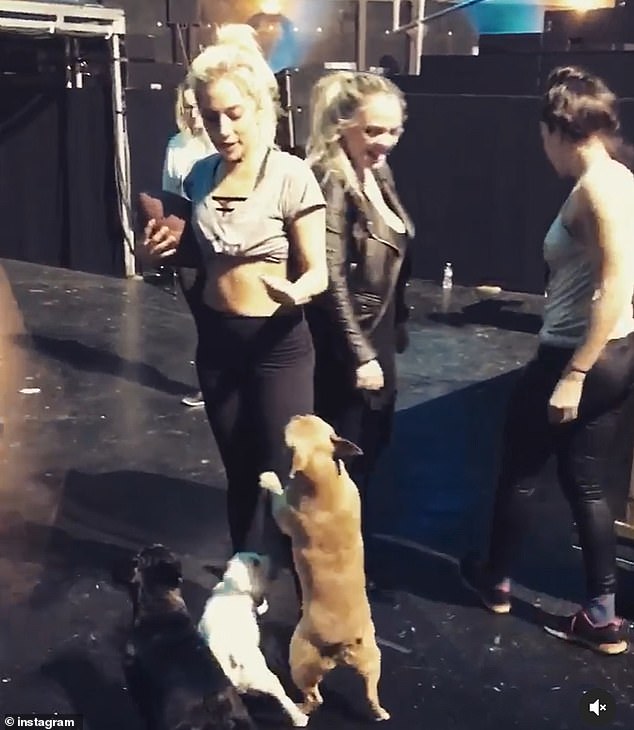 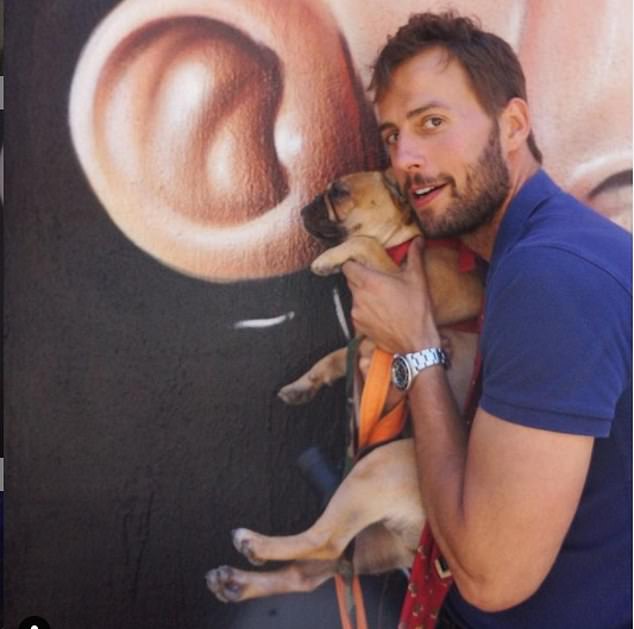 Ryan Fischer, 30, was shot by the suspects as he tried to protect the dogs 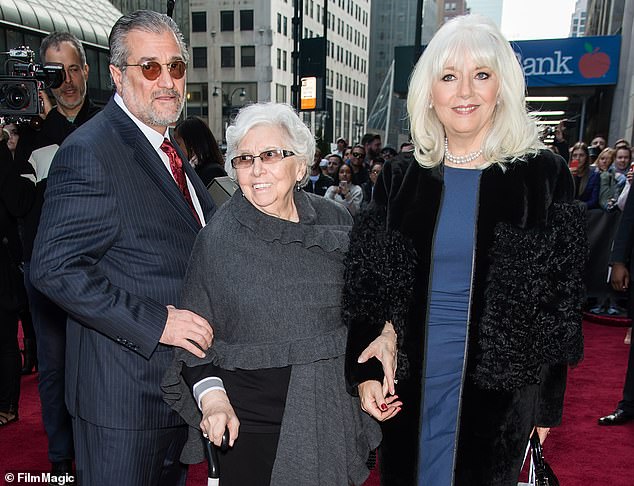 The singer’s 90-year-old grandmother Angeline Germanotta also celebrated the dogs’ return on Saturday. She is pictured above with Gaga’s father Joe and mom Cynthia

‘I want them apprehended so that they are tried for assault and/or attempted murder,’ Germanotta said Saturday morning of the men who snatched the pups – Koji and Gustav – and shot 30-year-old Ryan Fischer.

Fischer was taken to hospital but is now in a stable condition. His injuries were listed as non-life threatening.

‘I am relieved that Ryan is going to be OK and Koji and Gusatv were found. Thanks to the LAPD,’ Germanotta, who owns a restaurant on the West Side of Manhattan, said.

‘Letting Koji and Gustav go unharmed was nice but they must be punished for what they did to Ryan. Special thanks to the doctors and nurses in the emergency room.’

He had previously told Fox that his daughter had been in communication with Fischer in the hospital and spoken about the anguish of losing the dogs.

‘We’re just sick over it, it’s really horrible,’ Gaga’s dad, Joe Germanotta, told the New York Post. ‘It’s like someone took one of your kids.’

‘Our whole family is upset and praying Koji and Gustavo are not harmed,’ he said.

‘Shooting someone in order to steal dogs is wrong.’

‘Help us catch these creeps,’ the pop star’s father added. 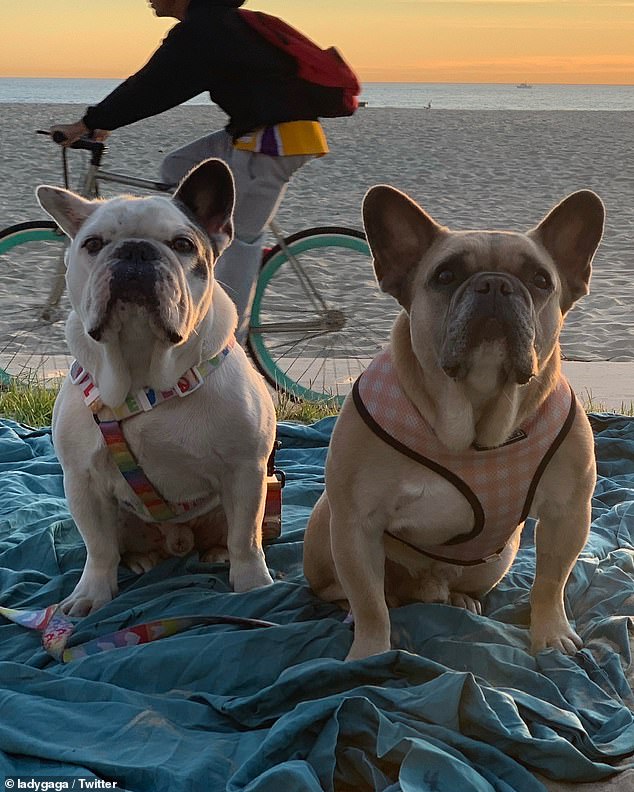 ‘My beloved dogs Koji and Gustav were taken in Hollywood two nights ago. My heart is sick and I am praying my family will be whole again with an act of kindness. I will pay $500,000 for their safe return. Email [email protected] to contact us,’ Lady Gaga had said Friday 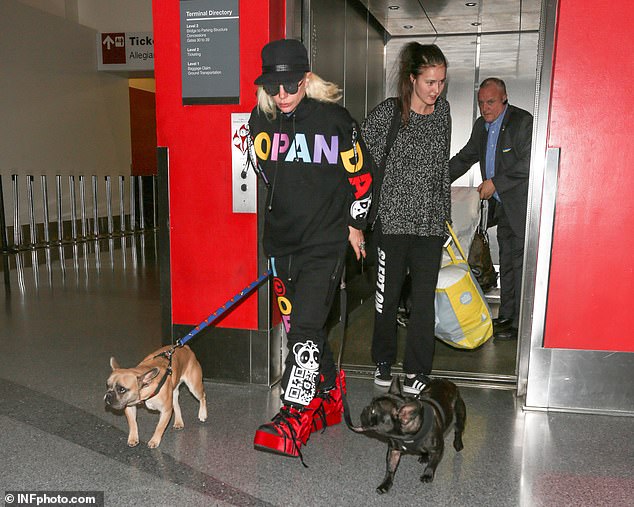 Gaga is pictured with Koji and Asia in 2017 after touching down in LAX airport, in Los Angeles

Gaga is pictured above with her beloved dogs Koji, Miss Asia and Gustav in a posts previously shared to Instagram. Miss Asia managed to escape during the robbery 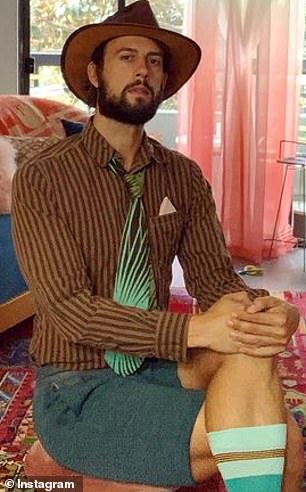 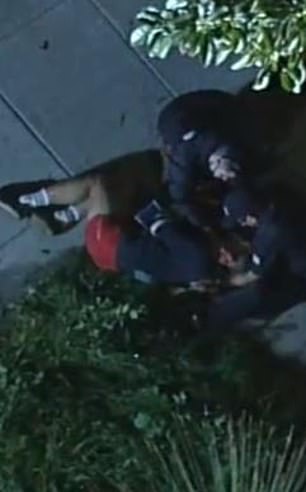 ‘I was upset that my granddaughter was upset,’ Angeline Germanotta told the New York Post. ‘I’m happy they recovered the dogs and I hope they’re alright.’

She added that she had been a ‘nervous wreck’ since the dogs were first taken.

The suspects in the robbery and shooting are two black males estimated to be between 20 and 25 years old, cops said on Thursday.

LAPD Robbery Homicide detectives ensured the public they ‘will continue to investigate to ensure the persons responsible are ultimately arrested and brought before justice.’

In a tweet Friday night, the LAPD said a woman had found the dogs ‘and reached out to Lady Gaga´s staff to return them.’

Lady Gaga’s representative and detectives went to the station and confirmed that they were the dogs, Tippet said.

The singer is currently in Rome to film a movie. 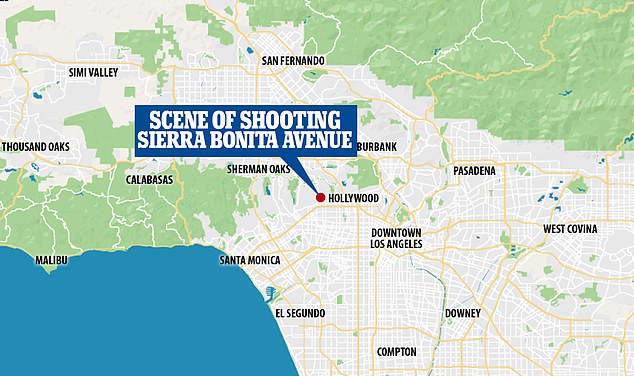 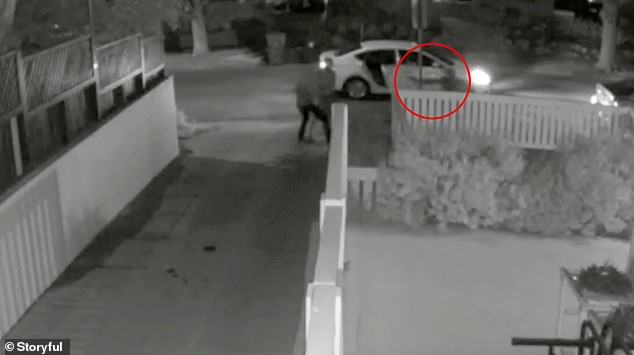 Surveillance footage captured from a neighbor shows a white sedan pulling up alongside the 30-year-old, and two attackers, dressed in dark clothing, climbing out of the back seat 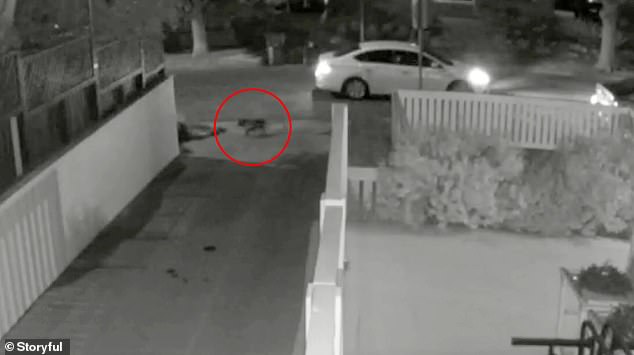 The woman who dropped off the dogs appears to be ‘uninvolved and unassociated’ with Wednesday night’s attack, Tippet said.

The dog walker, Ryan Fischer, was shot once as he walked three of the singer’s dogs in Hollywood. Video showed a white sedan pulling up and two men jumping out.

They struggled with the dog walker before one pulled a gun and fired a single shot before fleeing with two of the dogs.

The third, Miss Asia, escaped and has since been reunited with Lady Gaga’s representatives.

The dog walker can be heard on the video saying he had been shot in the chest.

On Friday, harrowing new footage emerged of the moment Fischer was shot in the street by assailants who then snatched her beloved beloved pets and left him writhing in pain in the street.

The video was taken on a neighbor’s doorbell camera near West Hollywood’s Sierra Bonita Avenue where Fischer, was walking the three dogs when he was suddenly attacked in the street at 10pm on Wednesday night. 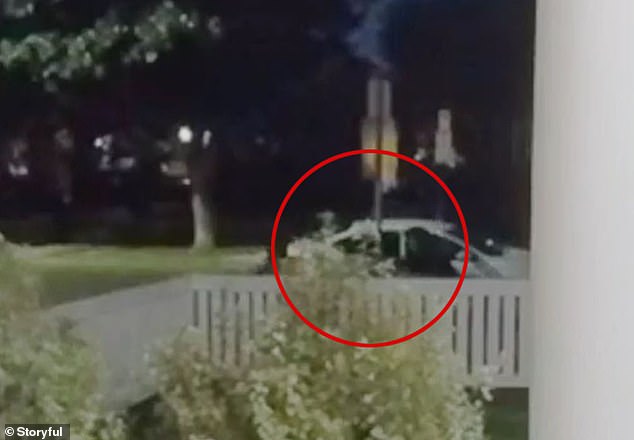 A grainy still from the neighbor’s doorbell cameras shows the two attackers punch Fischer to the ground on Wednesday night, shortly before 10pm, as the dogs were taken 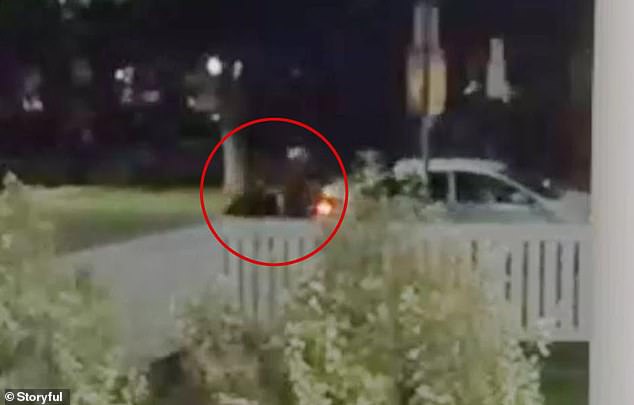 The white sedan waited with its lights on while the two attackers shot Fischer then grabbed Koji and Gustav. Miss Asia evaded them then returned to Fischer as he lay on the ground

They shot him once in the chest with a handgun, snatched Koji and Gustav and fled.

Miss Asia evaded them initially then, once they had fled, ran back to Fischer as he lay on the ground, screaming: ‘Help! I’ve been shot!’

The sudden breakthrough in finding the dogs came just hours after Lady Gaga broke her silence over the incident, calling her employee ‘a hero forever’.

‘I continue to love you Ryan Fischer, you risked your life to fight for our family. You´re forever a hero,’ Lady Gaga said in an Instagram post.

Making her first comments, the pop singer said on her social media accounts that she would pay $500,000 for the safe return of the dogs, including from anyone who had bought or found them. 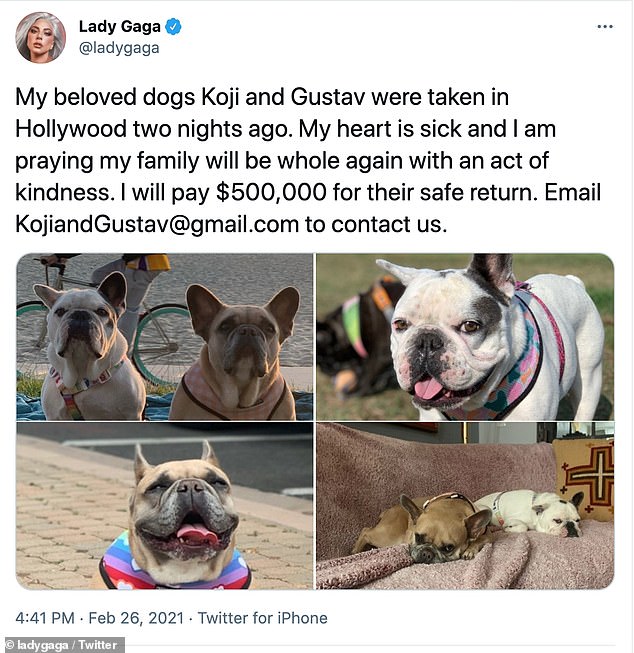 The singer offered a $500,000 reward for their safe return which she again reminded her followers in Twitter messages on Friday afternoon together with pictures of her bulldogs 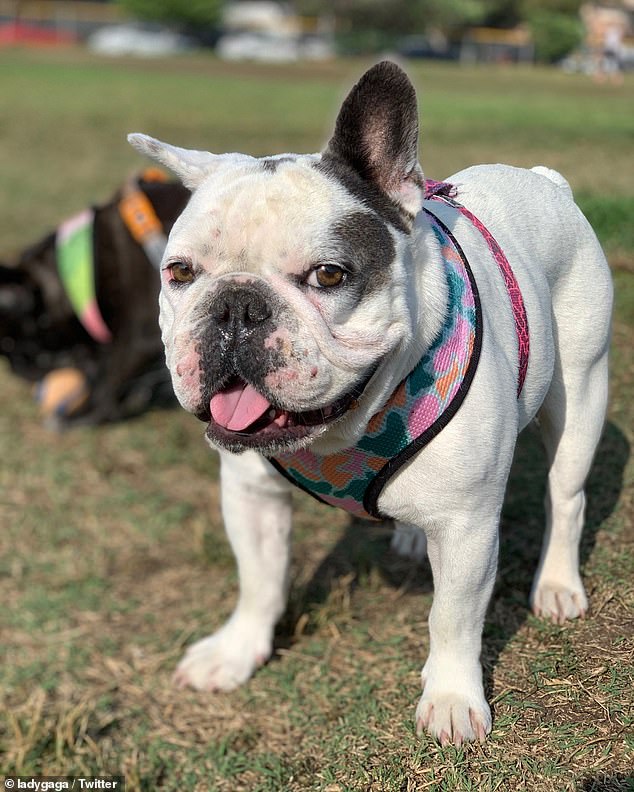 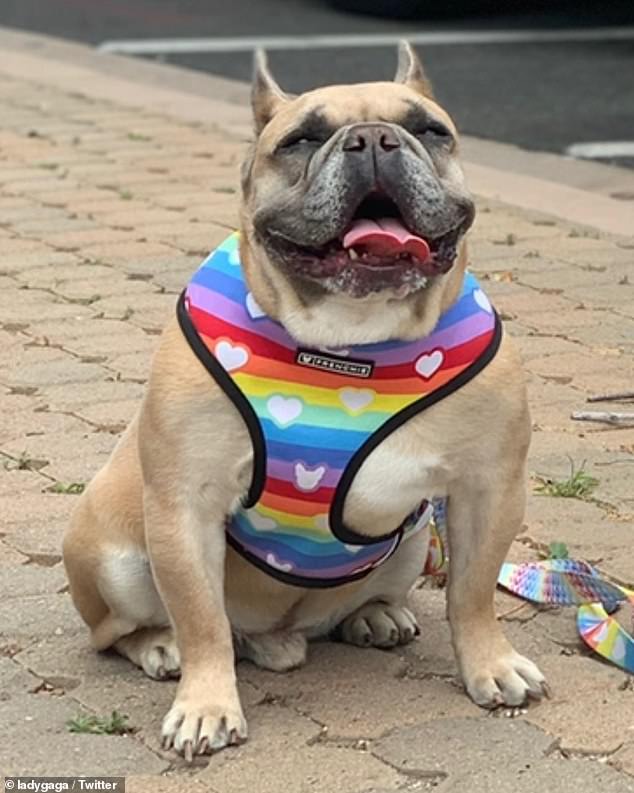 Koji is pictured in a rainbow coat. The dog, belonging to Lady Gaga was kidnapped on Wednesday evening but returned to the singer by a mystery woman on Friday evening

‘My beloved dogs Koji and Gustav were taken in Hollywood two nights ago. My heart is sick, and I am praying my family will be whole again with an act of kindness,’ Gaga posted on her Twitter and Instagram accounts, alongside photos of the dogs.

‘I will pay $500,000 for their safe return. Email [email protected] to contact us,’ Gaga said on Friday afternoon.

The Gaga dog theft has spooked Hollywood dog walkers into beefing up their security.

Some are applying for concealed carry permits to be able to protect themselves if they too are attacked, and others are changing their walking schedules to avoid being out at night.

Anna-Marie Arredondo, the owner of Happy Heart Pet Care, told TMZ that she was learning jiu-jitsu classes too.

Renee Lutz, owner of Fetch! Pet Care said she is no longer letting dog walkers go out at night, and that she is arming them all with pepper spray.

The singer praised the dog walker, 30-year-old Fischer, saying he ‘risked your life to fight for our family. You’re forever a hero.’

Lady Gaga on Friday had repeated her offer of a $500,000 reward for the return of her dogs with no questions asked.

Gaga was said to be ‘devastated’ by the incident. She remains holed up in her hotel room in Rome, where she is filming the new movie, Gucci.

‘Lady Gaga is beside herself about this situation,’ a source told ET. ‘Ryan is not only her dog walker, but also her friend. She is horrified that this happened.’

‘She is completely devastated and sickened by this,’ the source said, adding that the singer’s dogs are like ‘ her babies’.

‘She feels somewhat helpless because she is far away in Italy but is doing everything she can and praying for Ryan, Koji and Gustavo.’

Tippet said since police were not involved in the reward, he did not know if the woman would receive it.

They say it may not only jeopardize the investigation but also create a market for opportunistic criminals to target and kidnap celebrity pets then return them for handsome rewards.

Just six days ago, Fischer had posted a video to Instagram of himself singing to Gaga’s pups and tagged Miss Asia’s official Instagram page. He has previously posted images of the dogs on a number of other occasions.