King Charles has met Liz Truss for the first time since the Queen’s death, at Buckingham Palace.

The Prime Minister arrived at the central London residence this afternoon after the monarch returned from Balmoral.

It came after she had hailed his late mother for creating modern Britain as she launched a special session of the Commons.

MPs and peers will spend two days paying tribute to the Queen, following her death yesterday at the age of 96.

Ms Truss’s meeting with the Queen at Balmoral on Tuesday, where she was officially appointed PM, was her last face-to-face political action before her 70-year reign came to an end.

The Prime Minister had already spoken to the new monarch by phone yesterday. Parliament has swept aside its business for today and normal politics is largely on hold for the 10-day mourning period.

The session was started with a minute’s silence, with MPs present including Boris Johnson, in his first appearance as a backbench MP.

Ms Truss told MPs: ‘On the death of her father King George VI, Winston Churchill said the news had stilled the clatter and traffic of 20th century life in many lands.

‘Now 70 years later in the tumult of the 21st century life has paused again. Her late Majesty Queen Elizabeth II was one of the greatest leaders the world has ever known.’ 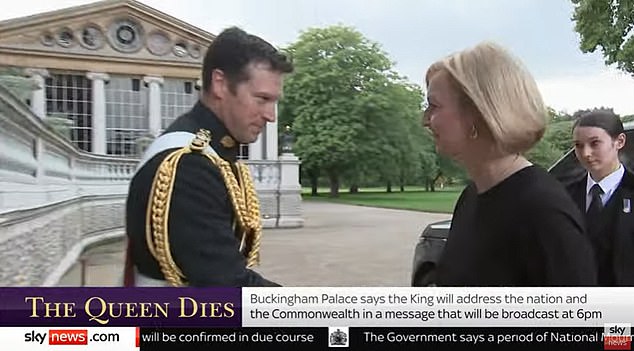 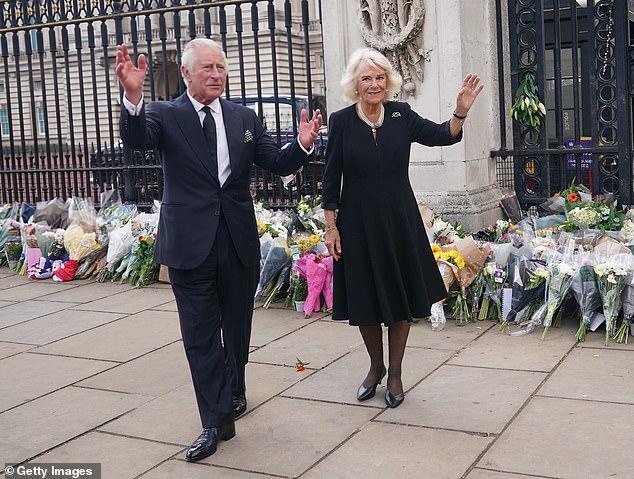 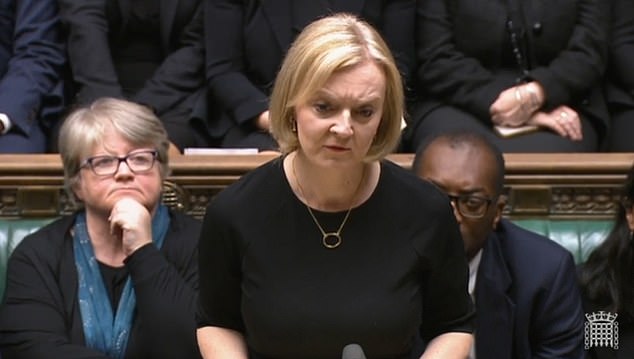 The Prime Minister hailed the late monarch for creating modern Britain as she launched a special session of the Commons. 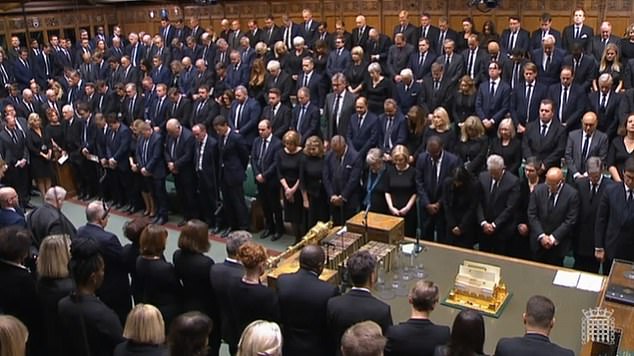 The session was started with a minute’s silence. The tributes are due to last until 10pm tonight and there will also be a rare Saturday sitting. 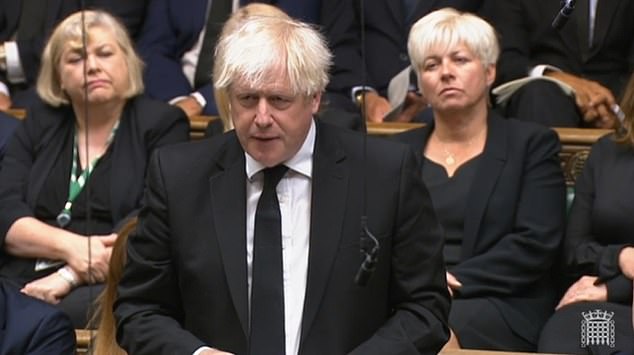 MPs present included Boris Johnson, in his first speaking appearance as a backbench MP after resigning as PM 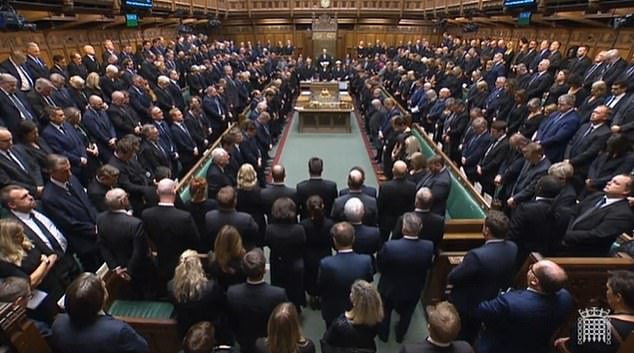 Tomorrow some senior MPs will take an oath of allegiance to the King from 2pm, with condolences continuing again until 10pm. 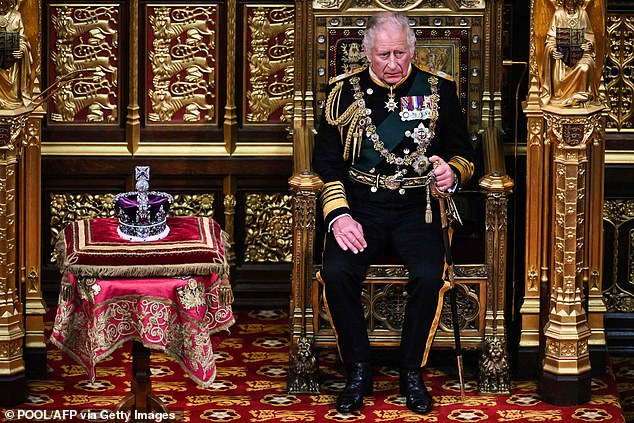 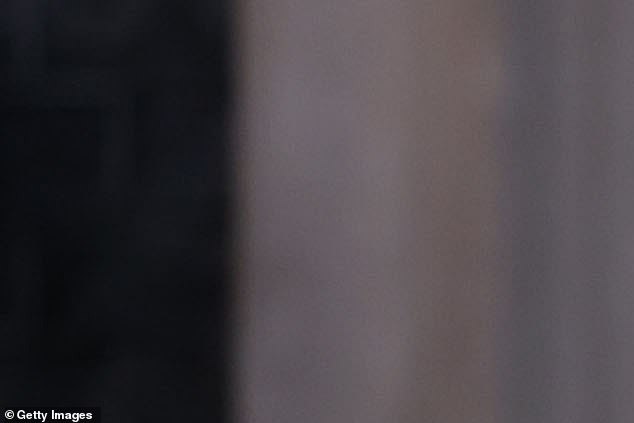 Instead Ms Truss will at lunchtime kick off a mammoth session allowing MPs in the Common and Lords in the upper chamber to pay their respects. 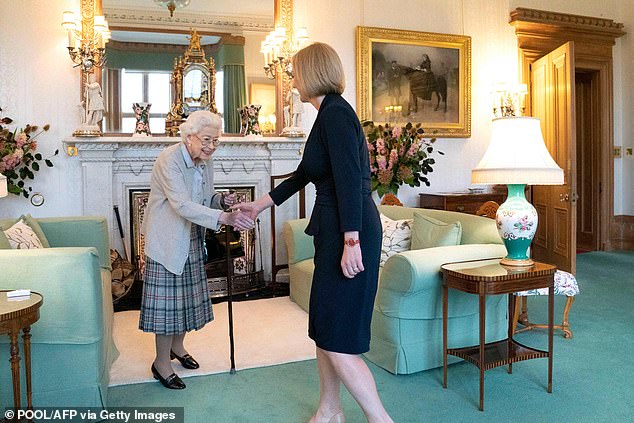 Ms Truss’s meeting with the Queen at Balmoral on Tuesday, where she was officially appointed PM, was her last face-to-face political action before her 70-year reign came to an end.

The Prime Minister said the Queen had fulfilled her promised to ‘dedicate her life to service’.

Liz Truss told the Commons: ‘As we meet today, we remember the pledge she made on her 21st birthday to dedicate her life to service.

‘The whole House will agree, never has a promise been so completely fulfilled.’

She added: ‘Her devotion to duty remains an example to us all. She carried out thousands of engagements, she took a red box everyday, she gave her assent to countless pieces of legislation and was at the heart of our national life for seven decades.’

Mr Johnson and Theresa May could both be seen on the backbenches, listening to their successor’s tribute.

Mr Johnson later discussed his final audience with the Queen at Balmoral on Tuesday. ‘I can tell you in that audience, she was as radiant and as knowledgeable and as fascinated by politics as ever I can remember and as wise as anyone I know, if not wiser.’

The tributes are due to last until 10pm tonight and there will also be a rare Saturday sitting. Tomorrow some senior MPs will take an oath of allegiance to the King from 2pm, with condolences continuing again until 10pm.

The latter session will end with a ‘formal humble address’ to the King, ‘expressing the deep sympathy of the House’ following his mother’s death at Balmoral on Thursday, the House of Commons said in a statement.

Every MP will have the option of taking an oath to the King when the House returns but are not obliged to.

Former prime minister Theresa May said today that audiences with the ‘immensely knowledgeable’ Queen were the only meetings as leader where everything that was said would remain private.

She told the BBC Radio 4 Today programme that the meetings involved ‘talking about the affairs of the day, in a sense tapping into her wisdom and that knowledge that she had from her great experience’.

Mrs May told the broadcaster the Queen would pass on ‘the knowledge that she had of the people, a lot of the people that the prime minister, that I, was dealing with.’

She added: ‘She was a very acute judge of people and was able often to give those little, if you like, pen portraits of people that she knew, that she’d met.

‘And sometimes it was a case of not just the individual but actually a sort of history of that individual, of her experiences of particular countries, particular issues.’

Paying tribute to the Queen’s warm nature, Mrs May said: ‘There was often that twinkle in the eye, and that magnificent smile that would break out and that calmed so many people’s nerves and made so many people feel at ease.’ 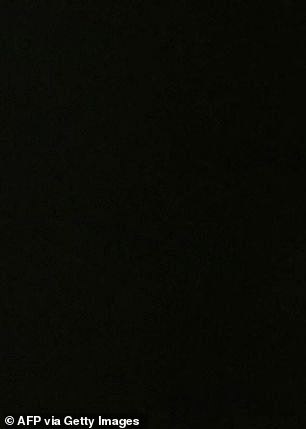 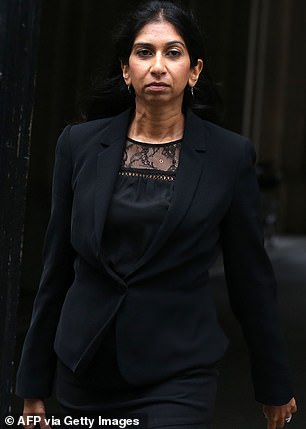 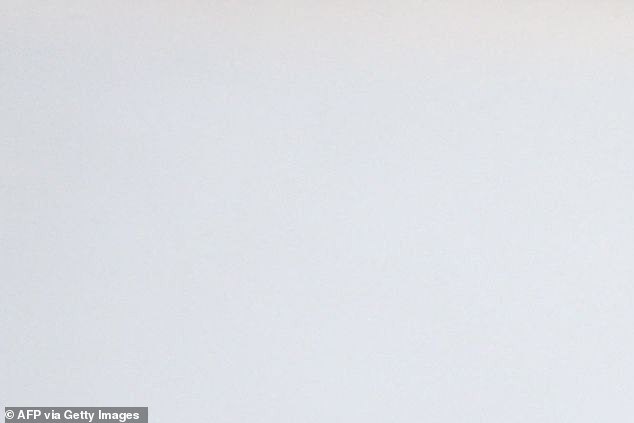 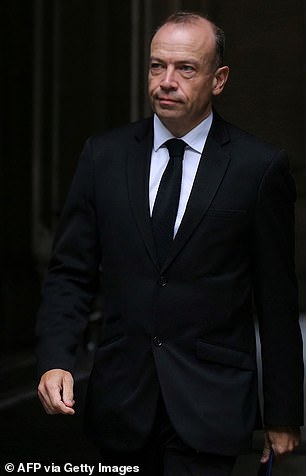 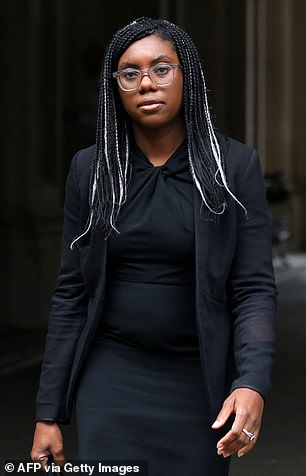 Tomorrow some senior MPs will take an oath of allegiance to the King from 2pm, with condolences continuing again until 10pm.

Parliament’s tributes will follow an outpouring of grief from across the political spectrum as the world digested news of the Queen’s death at the age of 96.

Ms Truss hailed the country’s longest-serving monarch as the ‘rock on which modern Britain was built’, while Sir Keir Starmer, the leader of the Opposition, said she was ‘a symbol of the best of us’.

Boris Johnson was among the six living former prime ministers of the Queen’s reign to pay his respects, two days after he met her at Balmoral to resign from office.

He said the Queen spread ‘magic around her kingdom’ for an ‘unrivalled’ 70 years and had a ‘simple power to make us happy’.

Commons Speaker Sir Lindsay Hoyle will determine the timetable in the House for the following days, but it is expected to be significantly reduced until after the state funeral as Parliament adjourns.

This means new laws cannot be passed until Parliament returns, though it could be recalled for pressing matters. 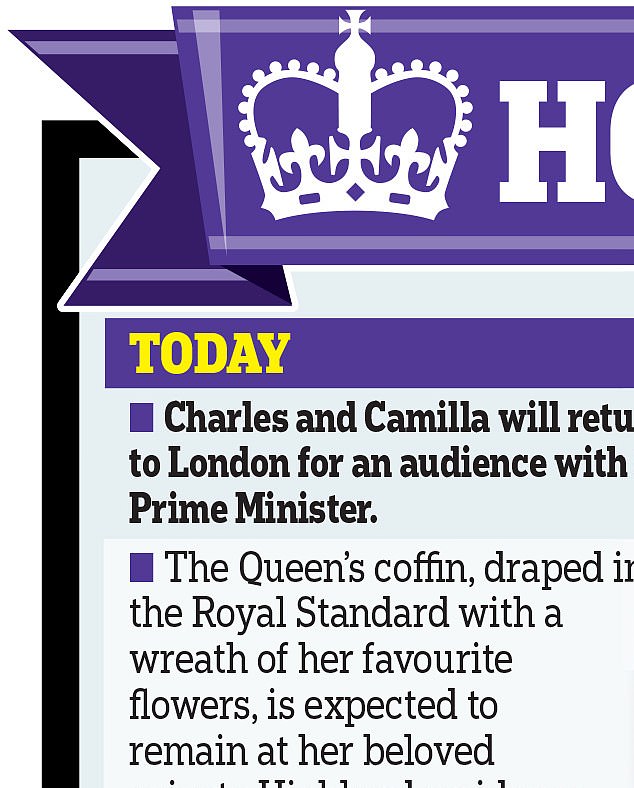 ‘London Bridge is down’ – Buckingham Palace’s behind-the-scenes code for Queen Elizabeth II’s death – triggers a period of mourning in which normal life in the UK will dramatically slow for the next ten days.

The bereft nation is in shock at the loss of the only monarch many of us have ever known. But the Palace and the Queen herself have been preparing for the aftermath of this inevitable moment since the 1960s.

Behind the scenes, the detailed plan – Operation London Bridge – has already been put into action. It ushers in an official period of mourning that will have an effect on daily life for millions.

The strategy, a major undertaking on an unprecedented stage, for the final farewell to Elizabeth II will be formally set in motion once approved by King Charles III.

The finer details of Operation London Bridge have changed and been updated over the years – but the broad brushstrokes have remained constant.

It begins with what is described as D-Day, or day of death, although for practical reasons the Palace has deemed today is D-Day, to allow the complex arrangements to be put in place.

Bells will toll at Westminster Abbey, St Paul’s Cathedral and Windsor Castle, and gun salutes – one round for every year of the 96-year-old Queen’s life – will be fired in Hyde Park and at other stations.

Floodlighting at royal residences will be turned off, and the public will begin to leave flowers as tributes from around the world pour in.

As Her Majesty’s death occurred in Scotland, a contingency plan known as Operation Unicorn has been triggered. The mythical creature is Scotland’s national animal.

With the monarch spending several months a year at her beloved home in the Highlands, the plans for a Scottish element have been organised for some time.

Part of the long-held London Bridge arrangements, Unicorn sets in motion additional ceremonial events in Edinburgh ahead of the logistics of bringing the Queen back to London.