Ye returned to Instagram early Thursday morning for the first time since he made antisemitic posts that ignited a wave of backlash. The posts were made hours after the rapper, formerly known as Kanye West, was escorted out of the Skechers headquarters and amid several businesses severing their ties with the artist.

In his first post, Ye made a joking repost of a fake article titled "Ye has reportedly cut ties with Kanye West." The second post was directed at Ari Emmanuel, the CEO of entertainment and media agency Endeavor. The CEO had penned an op-ed in the Financial Times following Ye's antisemitic remarks, saying that "those who continue to do business with West are giving his misguided hate an audience."

Ye had tweeted, "I'm going death con 3 on Jewish people," after posting a text exchange with Sean "Diddy" Combs on Instagram suggesting that Combs didn't support Ye's recent actions because he was being controlled by Jewish people. Both posts have been deleted.

"There should be no tolerance anywhere for West's anti-Semitism," Emmanuel wrote, according to Deadline. "This is a moment in history where the stakes are high and being open about our values, and living them, is essential. Silence and inaction are not an option."

"I lost 2 billion dollars in one day and I'm still alive," Ye wrote. "This is love speech. I still love you. God still loves you. The money is not who I am. The people is who I am." 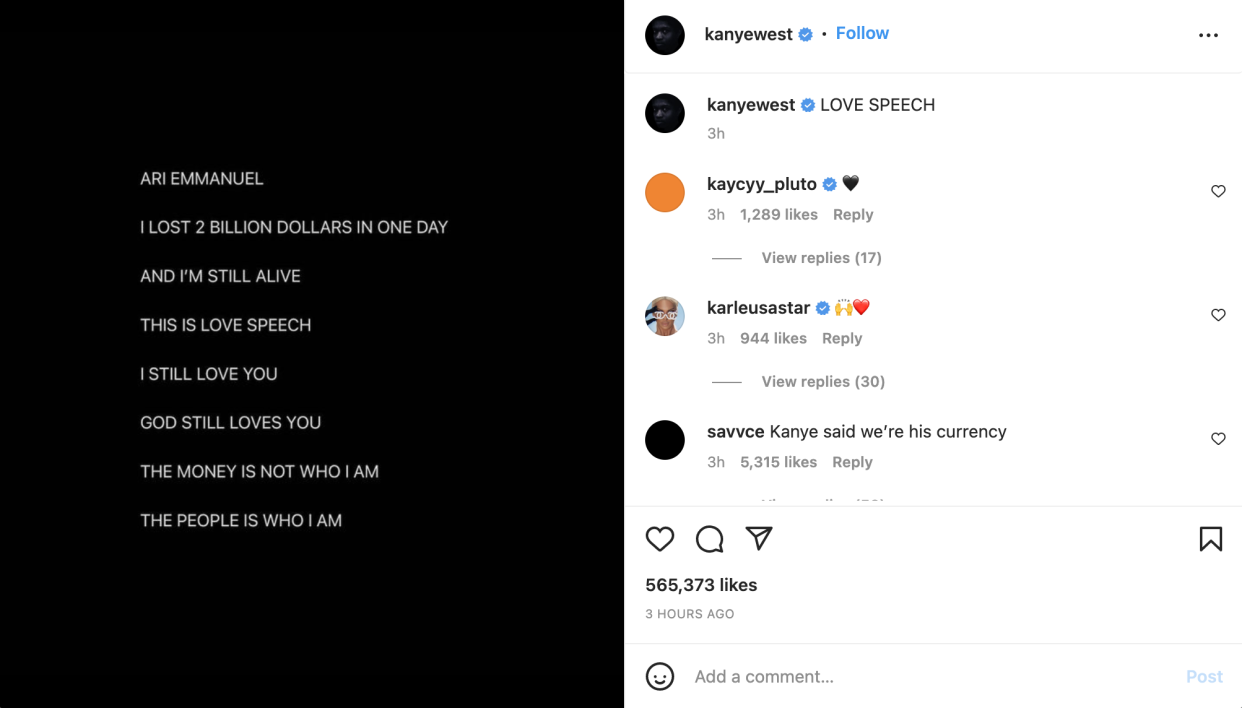 Ye's comments have sparked outrage, with many speaking out about the needed intolerance for antisemitism. Actor Josh Gad, known for his roles in "Beauty and the Beast" and "Frozen," said on Monday that his grandparents are Holocaust survivors, and that his "people are now under attack in a very disturbing and real way."

"I'm going to make this super clear: Kanye West is a raging f***ing anti-Semite," he wrote on Instagram.

Companies have also taken a stand against the comments. This week was one of heavy financial losses for the rapper after Adidas announced it was severing its $1.5 billion deal with Ye. TJX Companies, which owns department stores and TJ Maxx, announced it would no longer sell Ye's apparel, and Gap said it has stopped selling his YeezyGap line after it shut down its website for the clothing line.

The losses have moved Ye off of Forbes' billionaires list as his net worth has dropped to about $400 million, Forbes said Wednesday.

Examining how crime data is used by election campaigns