The Federal Court should reject “outdated stereotypes” about domestic violence victims when considering whether war veteran Ben Roberts-Smith punched his former lover in the face, his defamation case has heard.

The court is hearing closing submissions in the defamation suit brought by the decorated former soldier against The Age, The Sydney Morning Herald and The Canberra Times. Roberts-Smith claims the newspapers wrongly accused him of war crimes and an act of domestic violence against a woman dubbed Person 17. 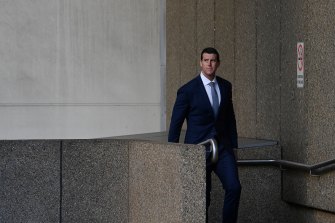 Ben Roberts-Smith outside the Federal Court in Sydney on Monday.Credit:Kate Geraghty

The media outlets are seeking to rely chiefly on a defence of truth and Nicholas Owens, SC, acting for the newspapers, addressed the allegation relating to Person 17 on Thursday.

He urged the court to reject submissions made by Roberts-Smith’s lawyers, filed in court but not released publicly, that he said relied on “outdated stereotypes” about how a domestic violence victim “should act” after an assault.

“The attack upon her [credibility] is without merit,” Owens said.

The court has heard Roberts-Smith and Person 17 continued their relationship for a brief time after he allegedly punched her in the face following a dinner in Canberra in March 2018.

Owens submitted that it was “hardly unusual” for a victim to wish to have continuing contact with their abuser, and she had told the court she “thought she got what she deserved for being silly”.

The court has heard Roberts-Smith had ended a turbulent six-month affair with Person 17 by the time the newspaper articles at the centre of the case were published. The former soldier told the court last year he did not object to the use of the word “affair” but insisted he was separated from his wife at the time, a claim disputed in court by his estranged wife, Emma Roberts.

Person 17, whose identity was suppressed by the court, gave evidence that Roberts-Smith punched her on the left side of her face and eye following a dinner in Parliament House in Canberra in March 2018 after she embarrassed him by falling down the stairs while drunk at the venue and bumping her head.

Roberts-Smith rejects the allegation and has told the court he tended to the bump on the woman’s head with ice. A former army officer at the dinner has also said he witnessed Person 17 fall down the stairs and sustain a “very large haematoma on the left side of her forehead above her eye”.

Owens said Person 17 had “never denied” that she had fallen down the stairs while drunk, or that she suffered a serious eye injury as a result. He said it “does not follow at all” that because Person 17 sustained an injury earlier that night that she was not punched later in the evening.

Owens accepted that the court was not in a position to assess whether the cause of the woman’s black eye was the fall or the alleged punch, but said: “We say, rhetorically, what does it matter? The medical cause of the black eye is irrelevant.”

He submitted that Roberts-Smith was “plainly upset” with Person 17’s conduct that evening and it was not implausible that he “lashed out” at her at their hotel room. There was an “overwhelming” imperative to obtain medical help for Person 17 but Roberts-Smith did not do so, he said.

Emma Roberts, giving evidence for the media outlets, told the court her husband’s lover arrived unannounced at the marital home in April 2018 with a “black eye” and revealed their affair had just come to an end.

It is not in dispute that Roberts-Smith hired a private investigator, John McLeod, to follow Person 17 to a Brisbane abortion clinic earlier in 2018. Roberts-Smith said he wanted to check whether she was telling the truth about a pregnancy because he suspected she was lying. Person 17 ultimately told the court she did not have an abortion but had a miscarriage.