Controversial Jordan Peterson tears up as he agrees he’s a ‘hero to incel men’ and responds to Olivia Wilde calling him an ‘insane pseudo intellectual’ saying: ‘It really didn’t bother me’

Peterson agreed that he was a ‘hero’ to incels or ‘involuntary celibates’ – a mostly online group of young men who believe society unjustly denies them sexual or romantic attention.

Wilde revealed earlier this month that Peterson was the inspiration for actor Chris Pine’s terrifying character Frank in the movie Don’t Worry Darling.

‘We based that character on this insane man, Jordan Peterson, who is this pseudo-intellectual hero to the incel community,’ Wilde said, adding that incels are a community of ‘disenfranchised, mostly white men, who believe they are entitled to sex from women.’

When asked whether he agrees with Wilde’s assessment that he is an ‘intellectual hero’ to incel men, Peterson became emotional and had tears in his eyes, before insisting that her comments ‘really didn’t bother me’.

Speaking on Piers Morgan Uncensored last night, Peterson said: ‘Sure, why not. People have been after me for a long time because I’ve been speaking to disaffected men – and what a terrible thing to do that is.’

Peterson then paused as he became emotional and tried to fight back tears, before adding: ‘I thought the marginalized were supposed to have a voice.’ 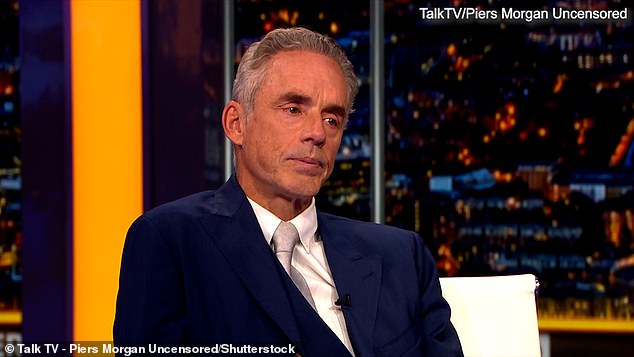 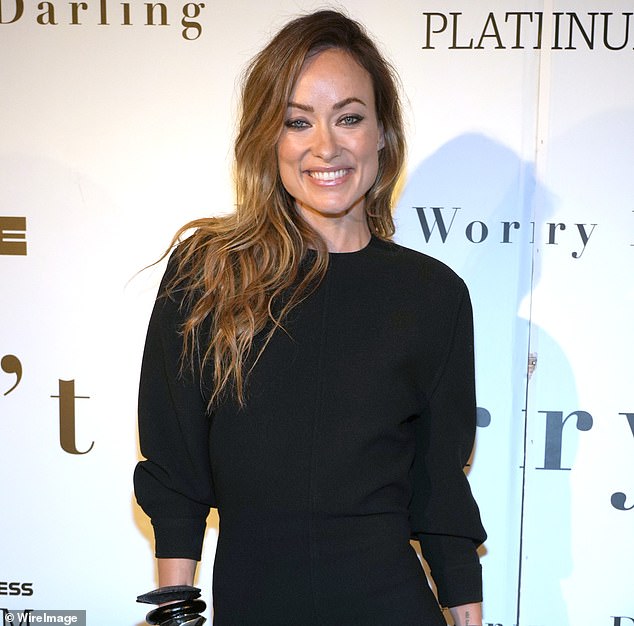 ‘We based that character on this insane man, Jordan Peterson, who is this pseudo-intellectual hero to the incel community,’ Wilde said. Pictured: Chris Pine and Wilde from a scene in Don’t Worry Darling

Incels consider themselves unable to attract women sexually and are hostile towards those who are sexually attractive.

They communicate with each other online, with an array of forums that promote male-dominant views, extreme ideologies of anti-woman hatred and sexual objectification of women, and calls for violence.

But Peterson said that incels are ‘alienated’ and ‘they don’t know what to do and everyone piles abuse on them’. 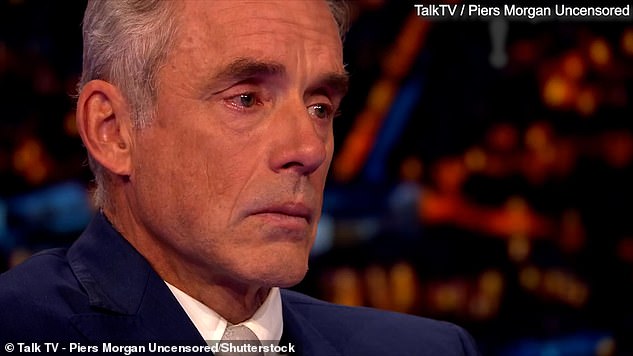 Peterson paused as he became emotional and tried to fight back tears, before adding: ‘I thought the marginalized were supposed to have a voice’

Peterson’s past scandals on gender, race and masculinity

2016: Slammed proposed Canadian legislation that would ban discrimination based on ‘gender identity or gender expression’, claiming it would threaten free speech

2017: Claimed that ‘the idea of white privilege is absolutely reprehensible’ because ‘most people have all sorts of privilege’

2018: Told British TV network Channel 4 that men need to ‘grow the hell up’ and ‘adopt responsibility’ while discussing the crisis of masculinity. Also claimed that the gender pay gap was not ‘only due to sex’

2020: Peterson’s daughter Mikhaila revealed that he had been hospitalized in Russia after developing a severe dependence on anti-anxiety medication benzodiazepines. She claimed that he ‘nearly died several times… from what the medical system did to him in the West’

Late 2020: Staff at Penguin Random House Canada attempt to block the publication of his self-help book Beyond Order: 12 More Rules for Life, slamming Peterson as an ‘icon of white supremacy and hate speech’

2021: Tells The Sunday Times that he had become suicidal as a result of his benzodiazepine dependence and shared that he had to be put in an induced coma while hospitalized in Russia

May 2022: Calls plus-size Sports Illustrated Swimsuit cover model ‘not beautiful,’ and further claiming ‘no amount of authoritarian tolerance is going to change that.’

Speaking with tears in his eyes, Peterson said: ‘Well god, it’s very difficult to understand how demoralized people are and certainly, there are young men who are part of that category.

‘You get these casual insults, like ‘you incels’. What does that even mean?’

He continued: ‘These men don’t know how to make themselves attractive to women and they are picky. And good for them, women you be picky, that’s your gift. Demand high standards from your man, fair enough.

‘But all these men who are alienated it’s like, they’re lonesome and they don’t know what to do and everyone piles abuse on them.’

A number of ‘incels’ have gone on to murder and attack women. In 2018, Scott Paul Beierle, an incel, murdered two women and injured four more at a Florida yoga studio before killing himsef.

Last year, 21-year-old Tres Genco, from Ohio, was charged with planning a mass shooting of women college students in Ohio and the illegal possession of a machine gun.

British activist Patsy Stevenson slammed Peterson for his comments, saying: ‘The way Jordan Peterson cries about incels being ‘misunderstood’ men who don’t know how to ‘make themselves attractive to women’.

‘Then doesn’t understand why people hate him. Jordan babe incels are f***ing murdering women because we say no to them.’

Peterson, a psychologist and professor emeritus at the University of Toronto, is a controversial figure due to his conservative views on free speech, gender identification and climate change.

During his rise to fame, Peterson has described himself as a ‘professor against political correctness’. The 60-year-old has been particularly outspoken about masculinity and has previously stated that the masculine spirit is ‘under assault’.

Speaking about how Wilde branded him ‘this insane man’ and a ‘pseudo-intellectual’ who appealed to an ‘incel community’, Peterson said: ‘You know, as far as critique goes, that was kind of low level.

‘I mean, once I got painted as ‘Red Skull’, you know, a magical super Nazi, that was kind of the end of the insults. There’s no place past that.

‘So, when Olivia Wilde made those comments, first thing I did was go look at the preview for a movie, which I quite liked. I thought, ‘I would go see that movie probably’. And perhaps I will. It didn’t really bother me.’

‘He’s depressed, take it easy on him’: Jordan Peterson explains why he visited Cristiano Ronaldo

Jordan Peterson has claimed he ‘helped’ Cristiano Ronaldo during a two-hour meeting after the star had experienced ‘some trouble in his life’.

Ronaldo was criticized after the footballer posted a picture of himself alongside Peterson on Instagram, where he called the controversial professor a ‘friend’.

Peterson said that Ronaldo had invited him to his house and the pair spoke for two hours about the footballer’s companies and what he wanted in the future.

Asked about visiting the footballer privately and the backlash the visit had caused, he said: ‘Well, he invited me to come and see him. He had had some trouble in his life a few months ago and a friend of his sent him some of my videos and he said he had watched those and then he read my book, or one of my books, and found them very helpful and he wanted to talk.

‘So I went out to his house and we talked for about two hours and he showed me all his equipment for keeping himself in tip top condition.

‘And we talked a bit about his companies but mostly we talked about what he wanted in the future and some of the obstacles that he’s facing while pursuing that. And so we had a strategic conversation, I would say, on those topics, for about 90 minutes.’

Piers added that his sporting friend seemed to be doing much better – following the well-documented loss of his child and criticisms over his football – since having spoken to Peterson.

The professor admitted they had discussed ‘envisaging a path forward’ out of some of his current problems.

Morgan said he found it interesting that someone with so much mental and physical strength would need his help, Peterson replied: ‘Well, I don’t know if he needed me because he’s a pretty competent guy, but… this is something that very competent people do – you can always improve on the edge, you know.

‘So his life is very well put together and he had some trouble.’

He continued: ‘We talked a lot about what he wanted, how he wanted his career to end in the most graceful possible manner and how that might be optimised.’

Peterson added: ‘It’s hard for people who have had a stellar career, and especially one that’s to some degree predicated on youth, to figure out what to do with the rest of their life.

‘Now, he’s well set up because he’s a very canny businessman, and he has a young family and has lots of friends and as far as I can tell, on that front, he’s situated himself extremely intelligently. So I think it looks to me like the transition for him is going to be quite smooth.

‘But that’s a testament to his wisdom because he made sure that his life was founded on more than one dimension of attainment and that was very wise.’