Washington: The White House will unveil a new minimum tax targeting billionaires as part of its 2023 budget, proposing a direct tax on the richest 700 Americans for the first time.

President Joe Biden’s “Billionaire Minimum Income Tax” plan would establish a 20 per cent minimum tax rate on all American households worth more than $US100 million ($133 million), according to an administration document obtained by The Washington Post. The majority of new revenue raised by the tax would come from America’s billionaires. 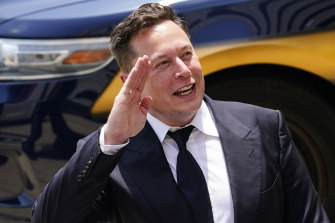 Elon Musk, the richest person in the world, has repeatedly pushed back against proposals to tax the assets of billionaires.Credit:AP

Biden has long favoured higher taxes on the wealthiest Americans, but the White House has until now not introduced a tax plan specifically designed to hit billionaire wealth. The new tax plan comes amid signs that the administration’s negotiations with Senator Joe Manchin over the President’s long-stalled economic proposal may be reviving. But all previous efforts to tax billionaires have failed amid major political headwinds.

Many of America’s billionaires can pay far lower tax rates than average Americans because the federal government does not tax the increase in the value of their stock holdings until those assets are sold. Billionaires are able to borrow against their accumulated gains without triggering taxes on capital gains, enabling huge accumulations of wealth to go virtually untaxed by the federal government.

The White House Office of Management and Budget and Council of Economic Advisers estimate that 400 billionaire families paid an average federal tax rate of 8.2 per cent of their income between 2010 and 2018. That rate is lower than the rate paid by millions of middle-class Americans.

The White House’s new plan would require billionaires to pay a tax rate of at least 20 per cent on their “full income,” or the combination of traditional forms of wage income and whatever they may have made in unrealised gains, such as higher stock prices. 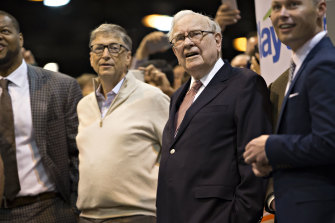 Billionaires paying a rate below that will have to pay the difference between what they pay now and the 20 percent rate. Billionaires already paying more than 20 per cent would not owe additional taxes. The taxes paid toward the minimum tax would count toward whatever billionaires owe once they have to pay ordinary capital gains taxes.

White House officials estimate the tax would raise roughly $US360 billion in new revenue over the next 10 years if enacted, according to the document. The proposal was developed by Biden aides at the Office of Management and Budget, the Treasury Department, and the White House National Economic Council.

The White House is expected to release a budget on Monday that includes increases in defence and nondefence spending, with a focus on mental health, child care, other social programs, and reducing the deficit, two other people familiar with the matter said. These people spoke on the condition of anonymity to reflect planning not yet made public.

Biden’s budget proposal will also cut the federal deficit by more than $US1 trillion over the next decade, according to a White House document. News of the deficit reduction was first reported by the Associated Press.

The outcry over the low tax rates of America’s financial elite has emerged as a key flash point in American politics, particularly after liberal Democrats in the 2020 presidential election sought to tackle wealth inequality by targeting billionaires.

Tax experts have long debated how best to turn that aspiration into reality. Democrat senator Elizabeth Warren proposed a wealth tax during that campaign that would have levied an annual 2 per cent tax on all assets in excess of $US50 million. Senate finance chair Ron Wyden this month unveiled a “billionaire income tax” that would have taxed on an annual basis the gains in value of stocks and other “unrealised assets”.

The White House approach represents yet another attempt to craft a billionaire tax that can be approved by Congress and administered effectively by the Internal Revenue Service. Wyden’s plan would have been assessed on an annual basis, whereas the White House gives wealthy households five years to be in compliance with the minimum 20 percent tax. The White House plan also creates an initial nine-year period from enactment for households to pay previously unrealised income.

Still, some tax experts prefer Biden’s prior approach of taxing wealth only once those gains are realised at death. Conservatives and other legal scholars have argued that it is unclear whether the Supreme Court will strike down any measure they view as a wealth tax.

“We still have questions of constitutionality: Can the IRS collect taxes if nothing has been sold based on the wealth, the property, of the taxpayers?” said Steve Rosenthal, a senior fellow at the Tax Policy Centre, a nonpartisan think tank.

It also remains unclear if even the more nuanced approach to taxing billionaires will be approved by Democrats in Congress. House Speaker Nancy Pelosi was among the Democrats who in private objected to Wyden’s billionaire tax plan, suggesting it amounted to a publicity stunt. Manchin denounced the billionaire tax as divisive last fall, though he later told the White House he could support such a measure.