‘If the teachers didn’t give you the A-level results you were hoping for…’: Jeremy Clarkson posts annual exam tweet boasting he got a C and 2Us and ‘ended up happy…with a Bentley’

Jeremy Clarkson has boasted he has ‘loads of friends’ despite failing his A-Levels in his annual results day tweet.

The former Top Gear presenter, 61, reveals every year he was awarded a C and two Us in his exams.

Today he wrote that he was ‘happy, with loads of friends and a Bentley’ despite the low grades he was given as a teenager.

Students were today handed their results based on in-school grading for the second year in a row due to Covid restrictions.

Mr Clarkson wrote: ‘If the teachers didn’t give you the A level results you were hoping for, don’t worry. I got a C and 2Us and I’ve ended up happy, with loads of friends and a Bentley.’

His 7.4million followers reacted with hilarity at the latest results day tweet, with one saying ‘it’s that time of year again lads’ while another added ‘makes me smile every year…University of life, the best university and woke free’.

The former Top Gear presenter, 61, reveals every year he was awarded a C and two Us in his exams 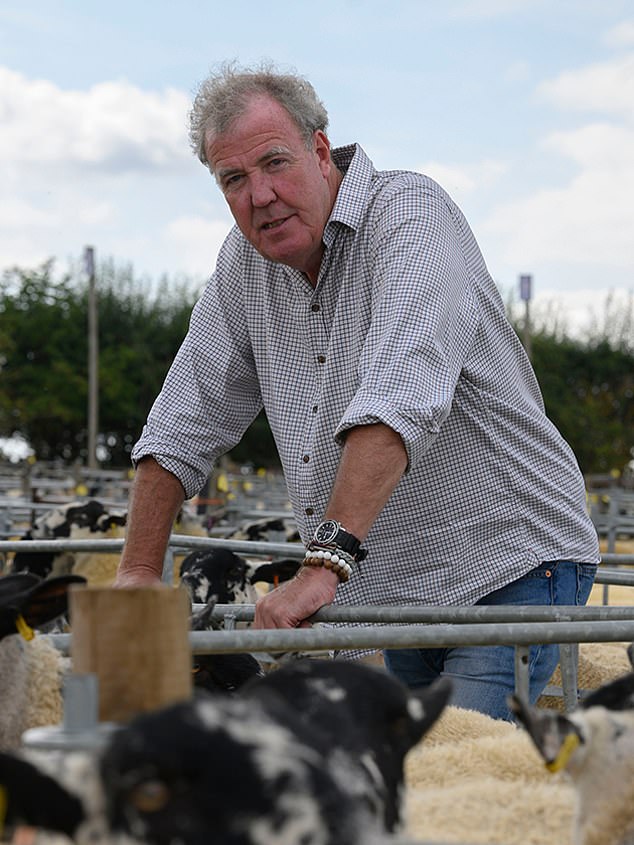 Today Mr Clarkson (pictured) wrote that he was ‘happy, with loads of friends and a Bentley’ despite the low grades he was given as a teenager

Last year the Who Wants To Be A Millionaire? presenter wrote: ‘A level results not great? Don’t worry, I got a C and 2 Us and I’m currently building a large house with far reaching views of the Cotswolds.’

He added: ‘And I didn’t even get the chance to insist the government gave me three As instead.’

One wrote: ‘The world is alright by me as long as this tweet appears each year.’

Another said: ‘It’s that time of the year again…’

One said: ‘I like this annual tweet, I pop back during the day to see just how many people have zero sense of humour….which is humorous in itself.’

‘Thank you for reminding kids again that exams aren’t the only thing that can drive someone to success, Jeremy. It’s such a valuable lesson,’ said another.

Another added: ‘I was really expecting you to say that you have a slightly bigger than average Lamborghini tractor, this is somewhat disappointing Clarkson..’

Teachers were less keen on the sentiment of today’s tweet, with one adding: ‘Really happy for you and I think it’s a good message overall. But could you change the wording about teachers giving the grades? It just makes it sound like we plucked it out of thin air when in fact we have to judge certain criteria to award grades.’

Anxious teenagers across the UK have today described suffering a sleepless night ahead of their A-level results being published at 8am. 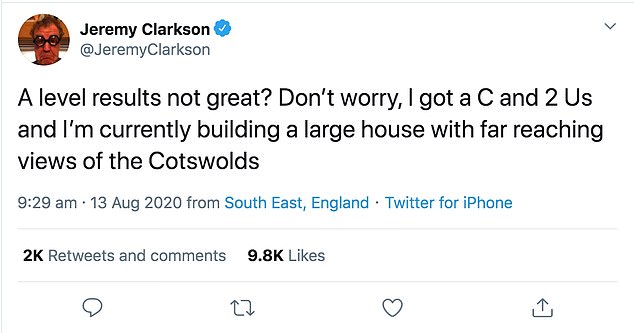 Last year the Who Wants To Be A Millionaire? presenter wrote: ‘A level results not great? Don’t worry, I got a C and 2 Us and I’m currently building a large house with far reaching views of the Cotswolds’

Students awaiting the grades which will get them to universities from this autumn said they ‘didn’t sleep a wink’ last night, with nearly half of today’s results expected to be graded at A* or A after a year of disruption amid school closures during the pandemic.

Clarkson posts the tweet to his 7.4 million followers on A-level results day every year

Among the hundreds of thousands of students and their parents unable to sleep last night, many took to Twitter to share their feelings and spread good luck messages, with one writing: ‘Funny how I said I wasn’t nervous but here I am awake at 5.45am #alevels2021’.

Another nervous teenager posted: ‘Me laughing to cover the fact I can’t sleep because I know I’m not gonna get into my dream university and am too nervous’. One tweeted: ‘It’s results day and after a night of absolutely no sleep I wish the best of luck to everyone, we’ll smash it’.

Around 30 per cent of the qualifications are expected to receive an A with 19 per cent getting an A*, it was reported last night. If more students gain top grades then it will be more difficult for top universities to differentiate between applicants, it has been suggested.

It comes after 38.6 per cent of A-levels were graded A or A* last year when exams were first cancelled. 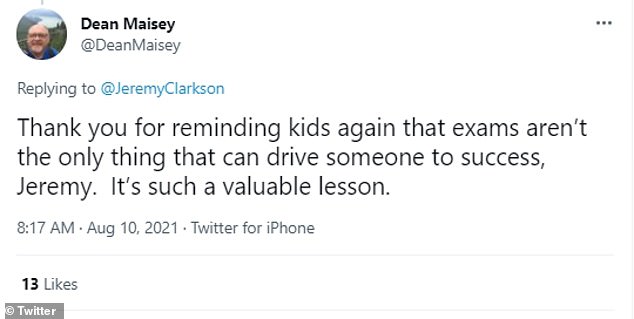 Youngsters who miss out on the grades needed to meet their university offers are likely to face greater competition for a place at leading institutions as there could be fewer selective courses on offer in clearing.

But unions representing school leaders and teachers have urged parents and students against using law firms to challenge their results – and appealing against grades just ‘for the sake of appealing’.

Gavin Williamson today defended this year’s record high A-level grades after it was revealed nearly half of this morning’s results are expected to be A* or A – but the Education Secretary admitted there may still not be exams next year with teachers deciding the results again.

But critics are concerned that middle class parents with ‘sharp elbows’ might have the upper hand when it comes for appeals, with the ‘have nots’ suffering disproportionately this year because they are more likely to be marked down and not appeal their results.

Teachers were less keen on the sentiment of today’s tweet, with one adding: ‘Really happy for you and I think it’s a good message overall. But could you change the wording about teachers giving the grades’

Robert Halfon, Tory chairman of the education select committee, said: ‘There’s likely to be grade inflation. The Government has got to make sure the appeals system is fair and easy to engage in and not just accessible to those with barristers for parents.’

Writing in the Telegraph, Mr Williamson said: ‘Because of the extraordinary conditions we have faced as a country, we announced in January that exams would not go ahead this year – it would have been unfair on students who had already given up so much in the battle against coronavirus.

‘Their hard work, however, deserves to be rewarded with a qualification. We must support these students in looking to the future, because their whole lives are in front of them.’ 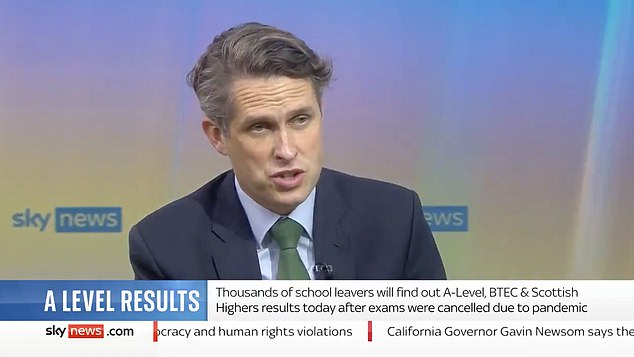 Education Secretary Gavin Williamson defended this year’s grade inflation, saying students ‘deserve to be rewarded’ after another year of disruption due to the Covid crisis

Asked on Sky News what the contingency plans are for next year’s exams, Mr Williamson said: ‘In the last academic year we have conducted an extensive consultation as we move back to examinations, and in a few weeks’ time as we go back into the winter period we will be doing another extensive consultation as to the contingency, which will be largely based around teacher-assessed grades, but we very much hope that we will be moving to a system of where we are able to move into the more normal pattern of examinations from next year, but always conscious that this pandemic, we have not always been able to predict the course of it, it has continuously changed, and it’s absolutely right that we have contingencies there, as we always do.’

Asked if he was ruling out teacher assessments for this time next year, he said: ‘What we are saying is you will probably have seen our consultation in the last academic year, we are very much planning to move back to examinations as a form of assessment, but we always have to have a contingency plan in place, and that’s why we will be consulting in the next academic year on those plans.’

Mr Williamson has said ’employers can have real confidence’ in the grades awarded to pupils.