Jacob Rees-Mogg today insisted Boris Johnson has weathered the Partygate scandal, saying the Ukraine war had exposed it as ‘fluff’.

The Cabinet minister said the standoff with Russia had ‘reset’ the political landscape by reminding the public that ‘serious and difficult decisions’ had to be taken.

The comments, at a ConservativeHome event at the party’s Spring conference in Blackpool, came amid growing confidence among the PM’s allies that he can survive even if the police fine him for breaching lockdown rules.

Mr Rees-Mogg said the devastation in Ukraine and Vladimir Putin’s ‘evil’ invasion had swept away the ‘trivial’ criticisms of Partygate.

‘All of that is shown up for the disproportionate fluff of politics that it was, rather than something of fundamental seriousness about the safety of the world and about the established global order,’ Mr Rees-Mogg said.

‘This I think resets politics in a fundamental way. Because we are now thinking – and Covid was part of this too – how do we deal with the difficult choices that have to be made…’ 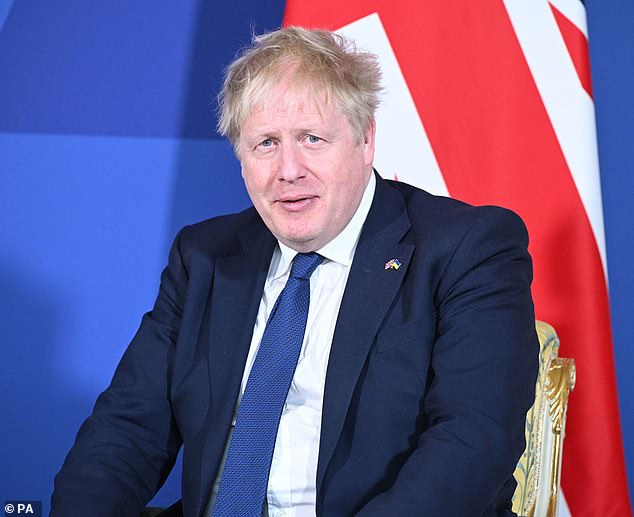 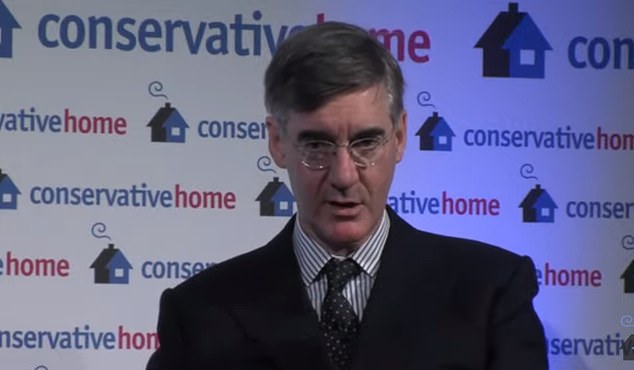 Mr Rees-Mogg compared Partygate to the Westland scandal, saying that also ‘absolutely obsessed Whitehall and Westminster because it was very much a process issue about how government was being carried out’.

He added: ‘When we look back in 36 years at Partygate, people will think what were they on about? Why were they doing that when they were passing from COVID and dealing with that to Russia and Ukraine…

‘And yet they were distracted by whether or not the Prime Minister spent five minutes in his own garden, or 25 minutes or whatever it is… But you see, one quickly can’t remember the precise amounts of times because it is fundamentally trivial.

Andrew Bridgen revealed yesterday that he had withdrawn his letter of no confidence in Mr Johnson because of the war in Ukraine.

The Brexiteer MP said in January that apparent breaches of lockdown rules in Downing Street had revealed a ‘moral vacuum at the heart of government’ that made the PM’s position ‘untenable’.

Yesterday Mr Bridgen said he remained ‘appalled’ by revelations about the events at No 10, but said that the ‘situation has changed’ as a result of the Ukraine crisis.

‘It would be an indulgence to have a vote of no confidence at the time of an international emergency, and this is not going to go away quickly,’ he said. ‘We need Boris Johnson where he is, leading the country.’

Tory MPs can trigger a confidence vote in the PM if at least 15 per cent of them hand letters to the 1922 Committee headed by backbencher Sir Graham Brady. The tally remains confidential until the key threshold is reached.

A Cabinet ally of the PM said: ‘It was never as close as was being made out, but there was a period of a few days when it looked like things could snowball into a confidence vote that would have been very damaging.

‘That’s over now. He knows – everyone knows – that massive mistakes were made over behaviour in No 10. But the war in Ukraine has put things in perspective for people. The police will do whatever they have to do, but I think his leadership has given colleagues new confidence in him. People are seeing the big picture. He will lead the party into the next election now – and he will win it.’

The source said that reforming the No 10 team and its relations with backbench MPs had also helped to calm the mood. ‘The only people who can get rid of a Tory PM between elections are Tory MPs,’ the source said. ‘Somehow that basic lesson had been forgotten in No 10, but it is not going to be forgotten again.’

A Tory critic of the PM insisted he was ‘not out of the woods’, adding: ‘There is no appetite for a contest now, but that does not mean the anger has gone away.’

At the height of the Partygate row in January almost all of the 31 Tory members of the Scottish Parliament called for Mr Johnson to go. Mr Ross had said his position was ‘untenable’.

The decision to withdraw the PM’s invitation to the party’s conference in Aberdeen prompted Jacob Rees-Mogg to brand Mr Ross a ‘lightweight’. Mr Johnson will now address the conference in person with a speech expected to focus on Ukraine.

After 7 weeks (and no fines) Partygate probe gets more staff!

By Rebecca Camber, Crime and Security Editor for the Daily Mail

The Scotland Yard squad tasked with investigating Partygate has been expanded, it emerged yesterday.

The elite unit of detectives – known as the Special Enquiry Team – has been granted more resources as the probe enters its seventh week.

But the Mail understands the squad has taken on more staff who will help investigate 12 gatherings in Downing Street and Whitehall that allegedly breached Covid rules. 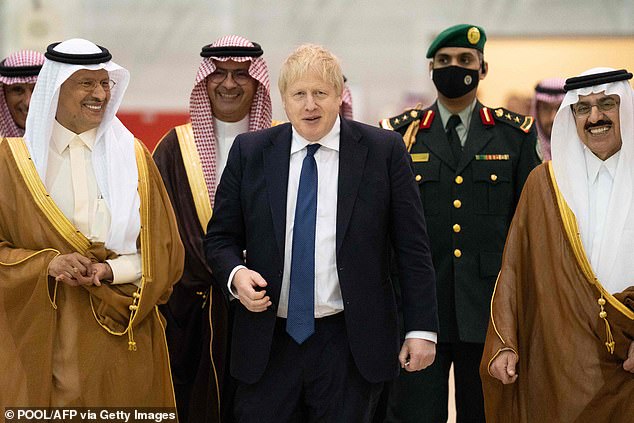 The Mail understands the squad has taken on more staff who will help investigate 12 gatherings in Downing Street and Whitehall that allegedly breached Covid rules. Pictured: Boris Johnson in Saudi Arabia on Wednesday

One member of staff said yesterday the team had ‘now got bigger’. Met Commander Catherine Roper, who leads the squad, has vowed to update the public when ‘significant progress is made in the investigative process’.

But as the probe threatens to drag into a second month, many Tories are growing frustrated with its slow progress, given the implications for the Prime Minister and his team if they are fined.

Officers have yet to hand penalties to anyone and are still in the process of sending out questionnaires to attendees. According to Downing Street, more than 80 questionnaires have been received by aides, officials and politicians demanding a response within seven days.

Boris Johnson – pictured with his aides and bottles of wine during lockdown – has returned his questionnaire.

However, with the focus at the heart of government now on Ukraine, some officials have asked for extra time while they take legal advice. According to sources, the force has now received a large number of responses. But it is taking time for officers to evaluate whether other people need to be contacted to verify claims.

The team are wading through more than 500 documents and cross-referencing accounts with more 300 CCTV images. Officers will consider responses before writing to attendees to warn them that they are being reported to the Criminal Records Office.

Conducted in the utmost secrecy, the team’s progress is being closely monitored by outgoing Commissioner Cressida Dick. Detectives have been told not to speak about the probe, even to colleagues.

Yesterday, a Scotland Yard spokesman acknowledged growing pressure to provide an update and said officers themselves want to let the public know about their progress so far.