A Melbourne Water representative fronted flood-affected Maribyrnong residents for the first time on Thursday night, but the community meeting was abruptly broken up and residents were left feeling silenced after being told to ask questions privately.

Melbourne Water managing director Dr Nerina Di Lorenzo told residents independent planning and environment expert Nick Wimbush would lead a review into the causes and contributors of the October 14 flood, including the possible effects of the Flemington Racecourse flood wall. 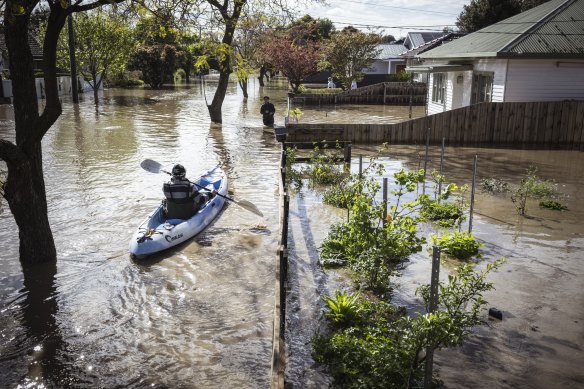 A person paddles through a street in Maribyrnong on October 14.Credit:Chris Hopkins

They were told to instead enter private conversations with attending representatives of Melbourne Water, State Emergency Service and Maribyrnong City Council.

Previous community meetings ran under a regular format where an audience of residents could ask questions publicly to a panel of experts, which sometimes became heated.

Those who had been looking forward to Melbourne Water’s appearance on Thursday said they were left with no answers after trying to ask questions privately and felt the meeting format intentionally stopped any robust public discussion.

Suze Fakhri, who is living in the upper storeys of her Oakland Street home after floodwaters inundated the bottom levels, had been trying to ask publicly about flood mitigation when the meeting was broken up.

“It’s rubbish. It should be a discussion between everyone,” she said. “They’re trying to say, ‘we’ve helped you and this is what happened. You can go home now and be happy’. Most people don’t have their homes.”

Fakhri, whose property was not insured for river flooding, said she was facing a damage bill of at least $60,000. She has been trying to find a law firm to help with a class action after hundreds of homes were damaged.

Carolyn Bohm, who had been hoping to hear Di Lorenzo’s response to Fakhri’s question, said she felt angry and deflated following the meeting.

Bohm is staying in a Moonee Ponds rental with her young family after her newly renovated home was destroyed. She said she wanted to know what could be done to reduce the severity of future floods.

“It’s been a waste of time really. I’m disappointed there was no opportunity for the community to ask questions to a panel,” Bohm said. “We’ve all been broken up into these little groups and I just don’t think we’re getting answers.”

Antoinette Bufalino, a 22-year resident who is now confined to the second storey of her home while the ground floor is rebuilt, said she was “furious” and had been wanting to ask about the scrapped dam project at Arundel.

“They know the whole community is angry about the same things,” Bufalino said. “They just won’t take our questions. It’s disgusting.”

The meeting was convened by Maribyrnong City Council and mayor Sarah Carter acknowledged many residents had made it clear that they were unhappy with the format.

Carter said it was designed to allow people to ask individualised queries but she would push for the next meetings to run differently.

“Could it have worked better? Absolutely. And I think particularly given the review is a very sensitive one,” Carter said.

There has been immense public anger at the state government and Melbourne Water over the Flemington Racecourse flood wall, which was approved for construction in 2007, dismissing concerns of Maribyrnong MP Bill Shorten and residents who campaigned against it.

The flood-warning system has also been a major point of contention, with many residents unaware they were at risk of flooding on the morning of October 14 until water was already in their driveways.

In his presentation, SES chief officer operations Tim Wiebusch walked the community through the days preceding the flood, which would become Maribyrnong’s worst on record.

He explained that intelligence from Melbourne Water, based on Bureau of Meteorology weather predictions, was anticipating a flood level of 3.3 metres and 3.4 metres above sea level on October 11 and 12, but this then dropped to 2.5 metres by October 13. The major flood level in Maribyrnong is 2.9 metres.

About 2.30am on the day of the disaster, an updated alert from Melbourne Water made the first mention of a potential major flood in Maribyrnong, with an emergency warning issued at 4am for some homes to evacuate. By midday, the flood level peaked at 4.216 metres.

“The actions that have been taken throughout the event are based on the best predictions and intelligence that is available at the time,” Wiebusch said.

Di Lorenzo told residents Melbourne Water’s modelling was constantly being adjusted during weather events according to rainfall and other conditions.

“It’s the best information we had at the time,” she said. “Like a bushfire, you can’t pinpoint exactly where it will go”

In her update, Maribyrnong City Council chief executive Celia Haddock said the council was working with Melbourne Water to develop a prioritisation process for planning permits needed by ratepayers undergoing works due to the flood. Application fees were also being waived.

Carter said she would request that Melbourne Water sets up a community steering committee for its flood review and she wanted to see it address how to prepare for an increase in extreme weather events with climate change.

The review will be opening up to public submissions from January 17, with flood-affected residents encouraged to write in with their experiences.