Singapore: Taiwan’s delegation to the UN climate change summit has called for Australia to legislate its net-zero by 2050 commitment, warning the Coalition’s plan remains vulnerable to the whims of future governments.

Speaking from Glasgow, the acting head of Taiwan’s delegation Tze-Luen Lin, also said it was time for Taiwan to be admitted as a full member of the UN climate change conference and that climate co-operation could be a way to start more dialogue with China. 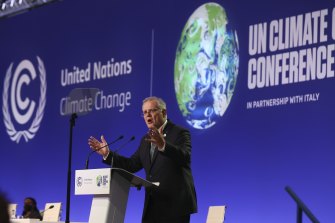 “It is not good to exclude Taiwan,” Lin told The Sydney Morning Herald and The Age. “It is a pity. We are a major manufacturing hub and play a crucial role in the global supply chain. We know we can be a very constructive player in climate action. We can provide technology and financial experience.”

The Taiwanese delegation flew to Glasgow as a non-government organisation. The team is shut out of any formal negotiations because of objections from China, which regards the democratic island of 24 million as a breakaway province.

“We are open to dialogue [with China]. Dialogue on many issues should be on the same equal footing,” said Lin.

Lin said Taiwan would legislate its net-zero 2050 target by next year, locking future governments into the commitment despite being reluctant to phase out coal altogether. Coal makes up around 40 per cent of Taiwan’s energy mix while gas makes up 35 per cent.

“We have tried to do this energy transition to increase the share of gas and renewables [and] at the same time reduce the reliance on coal and also phase out nuclear,” he said.

“We have transitioned the configuration of the power mix. The peak was 2007, and now it is going down.”

Lin said, “Australia is a major player, especially in energy supply” and it was time for it to legislate its net-zero commitment.

“It’s just an announcement,” he said. “It shows our strong collective political will to put it into law.”

Only 11 countries outside the European Union have legislated net-zero but more are now set to come under pressure to lock in the target after Glasgow. Prime Minister Scott Morrison has ruled out legislating Australia’s target after years of divisive internal debate over climate change policies inside the Liberal Party and with junior coalition partner, the Nationals.

But Lin’s comments open up another line of criticism for those countries and environmental groups dissatisfied with Australia’s climate ambition after Morrison declined to commit to further cuts by 2030 or join 40 other countries in phasing out coal. The Labor opposition has vowed to legislate net-zero if it wins the next federal election, which must be held by May.

Lin said Australia and Taiwan could work together on clean energy solutions, particularly in the Pacific where Taiwan is collaborating with climate threatened countries that it has diplomatic relationships with, including Tuvalu and Palau. Taiwan and Australia both have relatively high emissions per capita: Taiwan due to its emissions-intensive semiconductor industry and Australia due to its reliance on fossil fuel consumption and exports. Both countries have also been hit by severe droughts as one of the consequences of climate change.

“Taiwan has strong ties to Australia, especially in the energy field and also there is lots of discussion of hydrogen collaboration. Hydrogen will play a key role in the energy transition,” said Lin. “Australia can play a leading role and also help collaborate with the Asia Pacific region.”

Lin’s meetings with other countries’ representatives at Glasgow were closely guarded to avoid a wider fallout with China. Navigating the diplomatic maze will be tricky for Australian representatives if they are going to forge closer climate relations with Taipei but Trade Minister Dan Tehan said in October that he did see opportunities for collaboration across LNG, liquid hydrogen and the renewables sector.

In what could be the first step towards Taiwan’s broader inclusion in UN conferences, the United States and Australia backed Taiwan’s bid to rejoin the World Health Organisation in April last year, but its lobbying has so far been blocked by Beijing. China claims it is responsible for the democratic island, and maintains it takes “all necessary measures to ensure the wellbeing of the Taiwan compatriots” in international forums. China sent more than 100 warplanes towards the Taiwan Strait in October.

Fiona Fan, the director-general of the Taipei Economic and Cultural Office in Sydney said Taiwan’s inclusion in the global network for climate change prevention is not only rational but necessary.

“We can do more, and we want to do more, we only ask the world to let us do so,” she said.

Get weekday updates on the climate summit that will shape our future. Sign up to our COP26 newsletter here.