A NSW hospital serving nearly 100,000 people has been relying on cleaners and a gardener to look after dementia patients due to severe staffing shortages, a parliamentary inquiry has heard.

Doctors, nurses and patients lined up to vent their frustration and despair as the inquiry into regional health travelled to Taree and Lismore for public hearings on Wednesday. 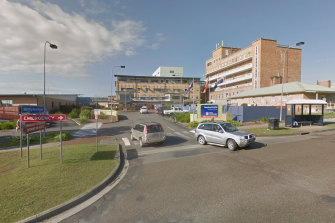 Manning Base Hospital in Taree. Credit:Google

Patients compared arriving at hospitals with no doctors as being like turning up to a “pub without beer” or a “pet shop that doesn’t sell dog food”.

The inquiry heard that at Tamworth, “ghost” operating theatres are being used for storage and for staff to make quiet phone calls because the hospital is struggling to find specialists to use them.

Tamworth has the busiest non-metropolitan emergency department in NSW.

Three senior doctors delivered a scathing assessment of the state of affairs in Taree on the state’s mid-north coast, which is serviced by Manning Base Hospital.

“Houston we have got a problem and the problem I’d like to talk to you about is workforce,” said Dr Simon Holliday, a rural GP with three decades’ experience and a staff specialist at Manning Base Hospital.

He said less than 5 per cent of Australian-trained doctors were choosing to practise in rural areas which was a “disaster” for people living outside capital cities.

Dr Holliday said overseas-trained doctors from developing countries were stepping in to fill the void which was tantamount to “reverse foreign aid”.

He said there was an epidemic of burnout among the foreign-trained doctors, who were having a “horrific time” as they were used as “cannon fodder” in understaffed facilities.

Dr Holliday was critical of the Australian Medical Association for refusing to endorse medical conscription, where doctors are made to serve time in regional and rural areas.

“Today you’ve heard about the pain and anguish in our community, as in many other regions’ communities, and you have the weight of our expectations on your shoulders.”

Dr Seshasayee Narasimhan said chronic underfunding had rendered Manning Base an “exhausted and severely downgraded hospital” that was “not appealing for new recruits”.

“No one wants to come here,” he said.

The Taree region has only one cardiologist serving a population of nearly 100,000 people and the worst cardiovascular outcomes of anywhere in regional Australia.

“This automatically explains why I have an extraordinary large workload,” Dr Narasimhan said.

“I constantly work 80-hours a week at the bare minimum to provide 24/7 care for my patients.”

Dr Narasimhan said the exodus of Australians from the cities into regional Australia would only exacerbate the current problems.

“This hospital will not be able to cope,” he said of Manning Base.

President of the Manning Great Lakes Community Health Action Group Eddie Wood said the hospital’s dementia ward had been shuttered without any consultation with the community.

“The cleaners on the ward have been asked to monitor and sit with the dementia patients,” he said.

“Dementia patients deserve the same level of care as anyone else … it’s horrendous.”

Marion Hosking OAM later told the inquiry her son had been present at the hospital when the gardener was brought in to sit beside a troubled dementia patient.

But Mr Wood said assurances from the hospital administrators and local health district that there was no staffing problem further incensed the community.

He said assurances from the hospital administrators and local health district that there was no staffing problem further incensed the community.

“You say that to the … first year graduate nurse who is put in charge of a ward,” Mr Wood said.

Mr Wood said only half of the 18 beds in the emergency department were funded and staffed.

The hospital had been stripped of its services since being absorbed into the Hunter New England Health District, including an eight-bed high dependency unit, he said.

“When you see your hospital and your staff demoralised and leaving, it’s atrocious,” he said.

Earlier the inquiry heard a GP shortage had hit “crisis” levels in Gunnedah, a town of 13,000 in the state’s north east.

Kate McGrath from the Gunnedah Community Roundtable raised her voice in frustration as she attempted to explain the situation, while being quizzed on what residents did when they were told they could not see a GP.

The inquiry heard some locals ended up presenting to the emergency department of Gunnedah hospital for minor ailments or made the 158km round trip to Tamworth.

The health inquiry was launched after the Herald exposed a series of deaths and near misses at hospitals in Western NSW last year.

It has already heard of multiple deaths in hospitals where only a telehealth doctor was present and a cook being forced to look after a stroke patient in the car park of Condobolin Hospital.

The inquiry will resume in Lismore on Thursday.