Italy’s coronavirus death toll passes 50,000 after recording another 630 fatalities with another 22,930 new cases

Italy’s coronavirus death toll has soared past the 50,000 threshold after it recorded another 630 fatalities on Monday.

Only the United States, Brazil, India, Mexico and the United Kingdom have also surpassed the grim milestone.

Fifteen thousand of Italy’s deaths, or nearly a third, have been recorded since the start of September amid a second wave which is biting harder than among many of its European neighbours.

As well as the fatalities, another 22,930 infections were registered today, bringing the total to more than 1.4 million since the pandemic started there in late February. 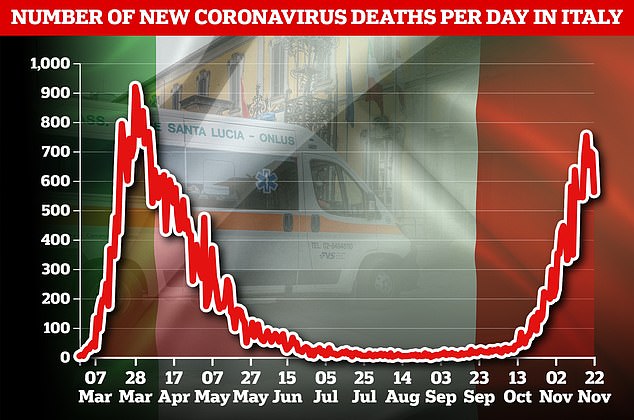 There were 630 covid deaths in Italy on Monday, that compares with 544 recorded last Monday 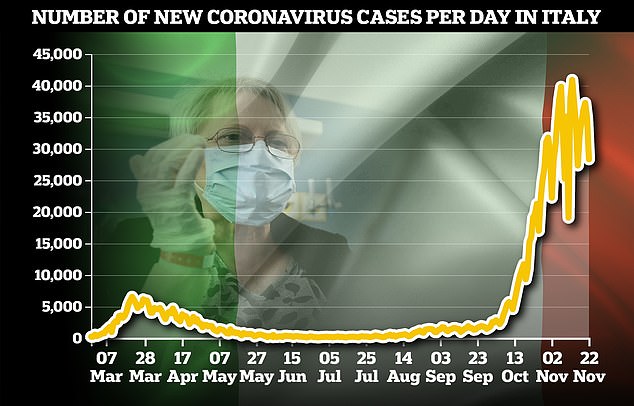 Another 22,930 infections were registered today, bringing the total to more than 1.4 million since the pandemic started in Italy in late February

EUROPEAN COUNTRIES WITH MOST DEATHS PER DAY

A punishing lockdown of all its 60 million residents brought the first outbreak under control but, as elsewhere, the number of cases has risen sharply in recent months.

Deaths have followed, with more than 750 recorded in one 24-hour period last week.

Italy’s seven day average of coronavirus deaths is the second worst in the world at 656 after the United States which has an average of 1,502 fatalities.

However, the number of fatalities still lags behind the tremendous death tolls which rocked Italy at the height of the pandemic – 969 deaths was the worst daily toll on record, on March 27.

The Italian government has sought to avoid another lockdown after it crippled the economy, focusing instead on regional restrictions alongside a nationwide night-time curfew.

Officials say the measures, which include the closure of bars, restaurants and shops in the worst-hit areas, are having an effect.

But medics warn of the continued pressure on intensive care units, for although the number of beds has been increased there is a lack of qualified staff.

‘Otherwise we’ll pay for it in January with more deaths.’