A Hamas gunman shot five people in Jerusalem’s Old City on Sunday, killing one and injuring four others before Israeli police fatally shot him.

Police identified the shooter as a 42-year-old Palestinian from East Jerusalem, and Hamas later identified him as Fadi Abu Shkhaidem, a teacher at a nearby high school. 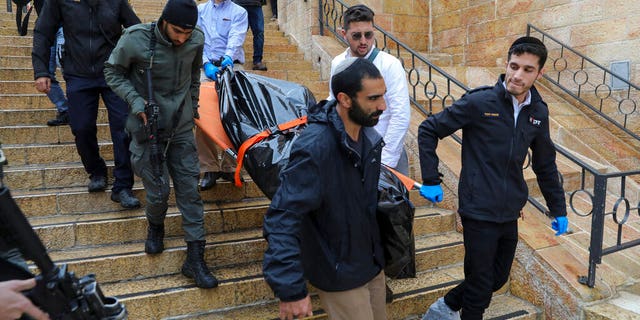 Israeli security personnel and members of Zaka Rescue and Recovery team carry the body of a Palestinian man who was fatally shot by Israeli police after he killed one Israeli and wounded four others in a shooting attack in Jerusalem’s Old City, Sunday, Nov. 21, 2021. (AP Photo/Mahmoud Illean)

The shooting occurred near one of the gates to the Al-Aqsa Mosque, a controversial holy site that the Jewish people know as the Temple Mount and Muslims call the Noble Sanctuary. 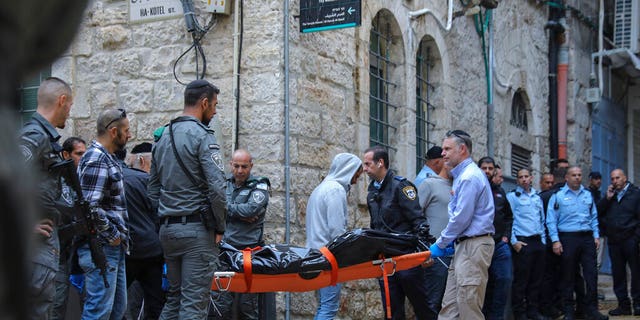 Israeli security personnel and members of Zaka Rescue and Recovery team carry the body of a Palestinian man who was fatally shot by Israeli police after he killed one Israeli and wounded four others in a shooting attack in Jerusalem’s Old City, Sunday, Nov. 21, 2021. (AP Photo/Mahmoud Illean)

Israeli officials said the gunman killed Eliyahu Kay, 26, who had emigrated from South Africa and worked at the Western Wall. Hamas claimed Shkhaidem as one of its members, but did not claim credit for the attack.

Authorities have therefore not determined if the gunman acted alone or on orders from the group. 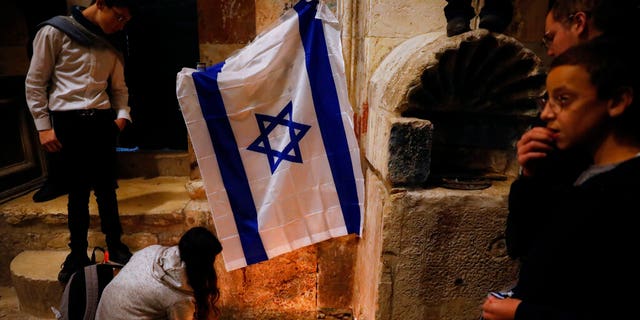 Israeli youth light candles in the shape of the Star of David at the site of a shooting attack that killed an Israeli man in Jerusalem’s Old City, Sunday, Nov. 21, 2021. A Hamas militant opened fire in Jerusalem’s Old City, killing the 26-year-old Israeli and wounding four other people before he was fatally shot by Israeli police. (AP Photo/Ariel Schalit)

But Hamas praised the attack as a “heroic operation.”

“Our people’s resistance will continue to be legitimate by all means and tools against the Zionist occupier until our desired goals are achieved and the occupation is expelled from our holy sites and all of our lands,” spokesman Abdel Latif al-Qanou said.

The attack follows a statement by Britain that it will join the U.S. and European Union in condemning Hamas as a banned terrorist organization.

“On a morning like this one can draw support from the (British) decision to designate Hamas – including what is called its political wing – as a terrorist organisation,” Israeli Prime Minister Naftali Bennett told his cabinet.

Dimiter Tzantchev, the EU ambassador-designate to Israel, condemned “this senseless attack against civilians. Violence is never the answer.”