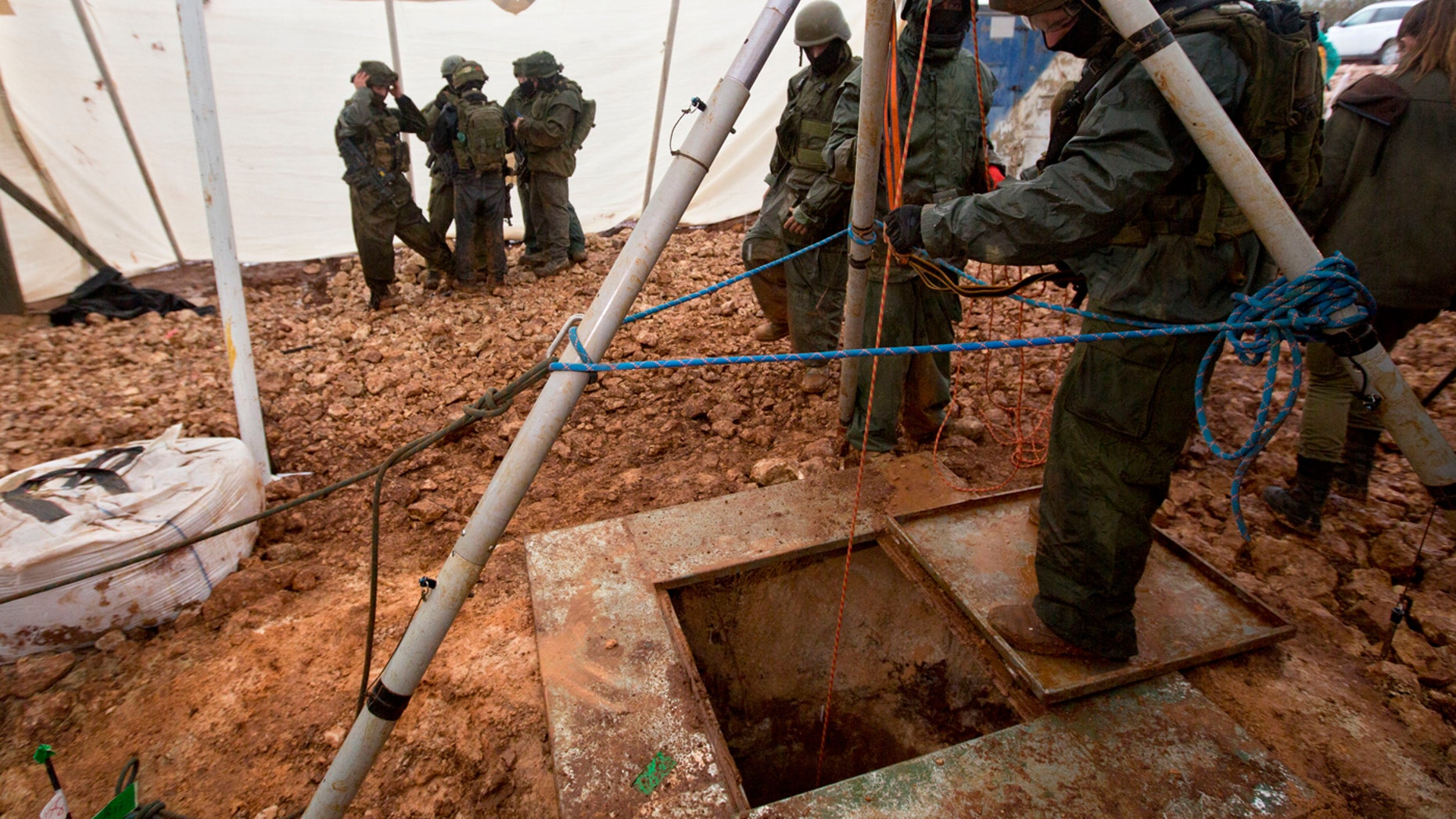 In this Wednesday, Dec. 19, 2018 file photo, Israeli soldiers stand around the opening of a hole that leads to a tunnel that the army says crosses from Lebanon to Israel, near Metula.
(AP)

Prime Minister Benjamin Netanyahu on Sunday confirmed that Israel has struck hundreds of Iranian and Hezbollah targets in Syria, including a weapons facility in a weekend airstrike, as the military announced the discovery of a sixth and final tunnel dug by the Lebanese militant group for cross-border attacks.

The statements marked a rare, public acknowledgment of Israeli attacks against Hezbollah and its patron Iran in neighboring Syria, where Israel is long believed to have targeted Iranian weapons shipments to the Lebanese Shiite group.

However, Israel has until now generally refrained from commenting about the strikes for fear of triggering a reaction and being drawn into the deadly fighting in neighboring Syria's civil war.

At his weekly Cabinet meeting, Netanyahu publicly confirmed the strike as he thanked outgoing military chief Lt. Gen. Gadi Eisenkot for long years of service and particularly his marshaling of Israel's shadowy campaign against Iran in recent years.

"We have operated with impressive success in thwarting Iran from establishing a military foothold in Syria, in the framework of which the military has struck hundreds of times against Iranian and Hezbollah targets," Netanyahu said. "In the last 36 hours alone, the air force struck storage facilities with Iranian weapons at the Damascus International Airport. The bulk of recent attacks show how we are more committed than ever to act against Iran in Syria, as we promised."

Coupled with the announcement that after Sunday's discovery, Israel was wrapping up its operation to destroy Hezbollah's tunnel network into Israel, the weekend strike in Syria is widely seen as Eisenkot's "parting shot" as his four-year tenure as military chief ends. He will be replaced on Tuesday by Maj. Gen. Aviv Kochavi.

After keeping a low-profile throughout most of his term, Eisenkot gave a series on interviews over the weekend focusing on his shifting the military's attention toward Iran directly, instead of just engaging its lesser proxies, Lebanon's Hezbollah and Hamas in Gaza. In a New York Times interview published Friday, Eisenkot said that Israel "has struck thousands of targets without claiming responsibility or asking for credit" as part of his showdown with Qassim Suleimani, the commander of Iran's elite Quds Force.

Eisenkot also revealed the government approved his shift in strategy in January 2017, stepping up airstrikes in Syria. In 2018 alone, he said Israel's air force dropped 2,000 bombs in Syria.

A far more visible part of his legacy has been the recent Lebanese border operation, which the military said thwarted Hezbollah's prime strategic investment for its next potential war.

Military spokesman Lt. Col. Jonathan Conricus said Sunday the final tunnel was the largest discovered so far, running hundreds of meters (yards) from under a Lebanese home and deep into Israeli territory. Israel launched "Operation Northern Shield" early last month to detect and destroy what it called a vast network of Hezbollah tunnels aimed for militants to sneak across the border, capture territory and stage devastating attacks.

Conricus said the latest tunnel originated from the Lebanese border town of Ramyeh, was 180 feet deep and ran 2,624 feet inside Lebanese territory and also "dozens" of meters into Israel. It included stairs, a rail system and a wide a passageway that allowed for the movement of equipment and a large number of forces.

The tunnel would be destroyed in the coming days, Conricus said, adding that while more tunnels still existed on the Lebanese side of the border, this effectively marked the end of the ambitious military operation.

"We have achieved the goal that we set out to achieve," he said. "According to our intelligence, there are no longer any cross-border attack tunnels into Israel."

Israel and the United Nations say the tunnels violate a cease-fire resolution that ended a devastating war between Israel and Hezbollah in 2006. Conricus said the U.N. peacekeeping mission, known as UNIFIL, was updated on the latest development.

In the wake of the tunnel discoveries, Israel has asked the international community to impose tough sanctions on Hezbollah and launch action against its state-within-a-state operation in Lebanon. The military said its forces would stay deployed along the border to monitor for any other possible underground activity, and said it holds the Lebanese government responsible for everything happening within its territory.

The powerful Shiite Hezbollah group, which acts independently in Lebanon, has yet to comment on the tunnels.

Israel has long called for a crackdown on the Iran-backed Hezbollah, a heavily armed mini-army that is believed to possess an arsenal of some 150,000 rockets that can reach nearly all of Israel. In recent years, Hezbollah has been bogged down in fighting in Syria on behalf of Syrian President Bashar Assad's government. But with that war winding down, Israeli security officials fear Hezbollah is refocusing its attention on Israel.