Up to 3000 people turned out for a largely incident-free Invasion Day rally in the Domain on Tuesday morning, condemning January 26 celebrations and calling for reform of the justice system.

Following discussions with police, protest organisers abandoned a plan to march through central Sydney, instead holding a seated event in the Domain over two hours. Police did not make any arrests or issue any fines for breaches of COVID-19 restrictions at the Domain gathering. 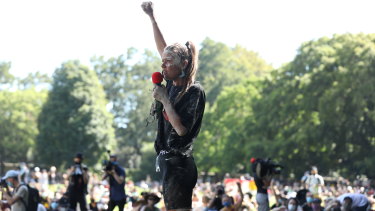 Protesters rejected Australia Day as illegitimate and called for reform in the justice system.Credit:Dominic Lorrimer

Attendees had risked being sanctioned after the NSW government refused to exempt the event from COVID-19 public health orders. Under the orders, protests in Sydney are limited to 500 people.

About 3500 people had put themselves down as attending on the Facebook event for the rally and police estimated 2000-3000 showed up on the day.

At the rally, protesters rejected Australia Day as illegitimate and called for justice for Indigenous people who have died in custody and for reforms to address Indigenous over-representation in prisons.

Bundjalung woman Vanessa Turnbull-Roberts told the crowd that change was needed in the courts and child protection system and that Australia Day should be “completely abolished”. 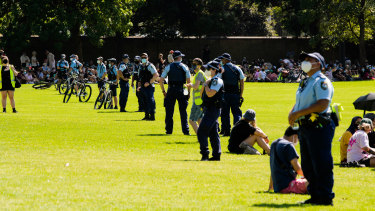 Police were out in force at the event. Credit:James Brickwood

Ms Turnbull-Roberts and other speakers lambasted the police and said they were part of a racist system.

“We have an authority and a police force that abused their power and will shoot first and ask questions next,” Ms Turnbull-Roberts said.

Repeated chants of “always was, always will be Aboriginal land” rang out through the event. Many speakers said January 26 protests would not stop until the national public holiday was abolished and Australia addressed Indigenous disadvantage.

Organisers met with senior police early on Tuesday and settled on a plan that would allow the seated rally to go ahead, with the crowd separated into 500-person segments, but cancelled the planned march that would have started at the park.

Police said there hadn’t been any major problems throughout the morning. Dozens of officers, including from the riot squad, were deployed to the event.

Organisers encouraged attendees to check in using QR codes when they arrived and the vast majority of people were wearing masks.

While some attendees were unhappy the march was not proceeding, activist Lizzie Jarrett said organisers did not want arrests and had made a “common sense” deal with police that would always the gathering in the Domain to go ahead.

“So we are going to stick to our word … We don’t want any reason for these coppers to f— with us today,” Ms Jarrett said.

Greens MP David Shoebridge praised the young Aboriginal activists involved in organising the event and said they represented the future.

“You have come here today, COVID-safe, peaceful,” he told the crowd.