Jakarta: Indonesia's air force deployed four fighter jets to the South China Sea late on Tuesday in a stand-off with Beijing after Jakarta protested over a Chinese violation of its exclusive economic zone. 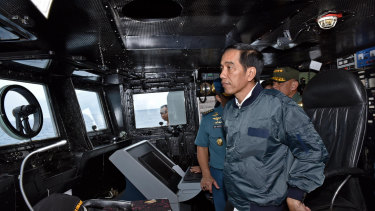 Indonesian President Joko Widodo, seen here on the way to the Natuna Islands in 2016, left for the area on Wednesday.Credit:AP

The issue has soured Indonesia's generally friendly relationship with China, its biggest trading partner and a major investor in Southeast Asia's largest country.

President Joko Widodo left for Natuna on Wednesday morning to meet with local fishermen who were earlier mobilised to help the country's navy in the area. It also deployed several navy ships.

Fajar Adriyanto, the air force spokesman, said four F-16 jets had been conducting flights over the islands, though he also played down fears of any confrontation with Beijing.

"They're doing standard patrols to protect our sovereign area. It just so happened that they're patrolling Natuna," Adriyanto said. "We don't have the order to start a war with China." 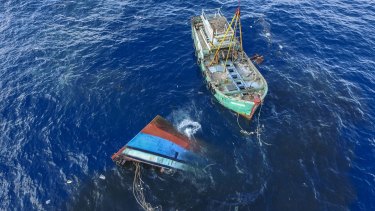 The South China Sea is a global trade route with rich fishing grounds and energy reserves and China claims most of it based on what it says is its historic activity. But South-east Asian countries, supported by the United States and much of the rest of the world, say such claims have no legal basis.

On Monday, Indonesia said it was mobilising fishermen to the northern Natuna region and had deployed several naval ships.

There had been no negotiation with the Chinese vessels as of Tuesday night, Nursyawal Embun, director of sea operations of Indonesia's Maritime Security Agency, told Reuters.

According to data from Maritime Traffic, a ship tracking website, at least two Chinese ships – Zhongguohaijing and Haijing 35111 – were in waters on the edge of Indonesia's exclusive economic zone on Tuesday, approximately 200 kilometres off Indonesia's Riau Islands. 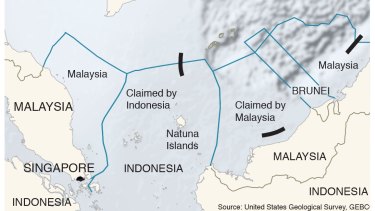 The ships were within China's unilaterally-declared "nine-dash line", which marks a vast expanse of the South China Sea that it claims, including large swathes of Vietnam's continental shelf where it has awarded oil concessions.

The China Coast Guard ship Haijing 35111 is one of a handful of Chinese ships that was involved in a months-long stand-off with Vietnamese ships last year near the offshore oil block in the disputed waters, which fall within Hanoi's exclusive economic zone.

Luhut Pandjaitan, the coordinating minister in Indonesia's cabinet overseeing resources and investment, said his country's sovereignty was not negotiable, despite China's economic importance for his country.

"I would not sell our sovereignty for investment, never," he said. "I'm not stupid."