She looks at me like I have rocks in my head.

I'm in an upmarket bar in central Singapore bar, working on an investigative piece and looking for information, and I've just started talking to Lena*. 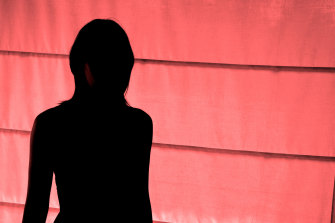 Prostitution is rife in Singapore despite police raids and legal restrictions.Credit:iStock

Everything about the bar oozes money – the entry fee, the decor, the expensive fitout, the upmarket business suits through to the fake breasts some of the women possess.

On the surface, it's of a piece with the city-state's sanitised image of a law-abiding place where everyone is safe, everything is well-managed and money can buy you can anything. But sub rosa, this place is nastier than the overnight casinos of Cambodia's Sihanoukville, dirtier than the dive bars of Chicago and seedier than the sex-strips of Bangkok.

Lena has impossibly perfect red lipstick lips, a black dress with spaghetti straps. She's 24, she tells me soon after we start talking, and this isn't her first stint in Singapore. She's here to sell herself to one of the multinational clientele who have blown into town and ended up in this place.

Lena studies during the day and works at night, she tells me, imposing herself confidently on the conversation in a way I can not, making herself heard and steering the conversation away from my fishing-expedition questions and back towards the business at hand. But I'm not looking to hire a prostitute, I'm looking for information – information she doesn't have, and probably wouldn't share if she did – so I'm wasting her time. Eventually she stands up from her bar stool and excuses herself, wandering off into the dark of the club. 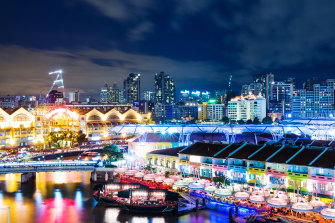 Singapore has a sanitised image of a law-abiding place, but it has a seedy underbelly too.Credit:iStock

Over the course of about two hours, I speak to seven women in the bar and buy them drinks, searching for my needle in the haystack. In between conversations I play with my phone, locking it and unlocking, looking at the home screen picture of my three-year-old daughter dancing on the sands of Safety Beach on Victoria's Mornington Peninsula, her face lit up with a Christmas tree smile. I wonder how my wife is sleeping.

I wonder if that woman across the bar has the answers to the questions I have. I wonder how it came to this for all these women, young and alone.

Most of the women I speak to are from Indochina, though one is from Africa (Elizabeth*, who wants to go to Europe eventually and open a beauty salon) and one is from Russia.

Vera* tells me she has two sons, aged five and 10, back home in Russia. She's not the only woman working the room who has kids. She also has blonde hair, so she wants $600 for a short time.

As we both begin to realise we aren't going to get what we want, she says casually: "I do everything for my kids."

She's drinking overpriced mojitos that I'm paying for and when – after she's parried my questions – we end up debating whether Crimea is part of Russia or Ukraine, I realise it's time to move on.

This place is nastier than the overnight casinos of Cambodia's Sihanoukville and seedier than the sex-strips of Bangkok.

Another woman, Ann*, ducks my questions when I ask her where she is from. "I'm from heaven. You need to relax with me tonight and you'll have your energy back tomorrow."

Actually, she's also from Indochina and no, I don't need to stay with her.

Most of the women have worked in other cities in the region, too, such as Bangkok, Bali, Tokyo and Seoul. They're from another world, on a high-priced sex tourism conveyor belt that takes them from place to place, punctuated by trips back home.

All around me, men lean in to kiss the girls in the shadowy light. Is there any price that can be high enough to compensate for this?

I get chatting to a couple of English lads about the Premier League in the smoking room, which I keep ducking into to take notes on my phone between conversations. Their eyes are popping out of their heads and they have big grins on their half-cut faces.

Prostitution exists in a legally grey area in Singapore – neither wholly legal nor illegal. Sex workers are prohibited migrants, while soliciting, pimping or owning a brothel are illegal.

But in practice, there are a number of illegal brothels (this place isn't a brothel, incidentally), particularly in the Geylang area, and workers from a list of countries including China, Malaysia, Thailand and Vietnam are allowed in for a limited time – under certain conditions – and with the knowledge of police receive a "yellow card" that allows them to work.

The state does not like to acknowledge this fact and police raids occur periodically.

An NGO I later contact for comment about this well-known bar declines to answer my specific questions about the place. Their take is that, essentially, this article will cause a raid to occur, and the women to be deported, but nothing substantive will change in the system.

In the few hours I was in that bar I didn't find the answers I was seeking for my story, but I did find the hidden face of "respectable" Singapore.

And while I can choose to never go back there, some of these women aren't so lucky.

*The names of the women in this story and the name and location of the bar have been deliberately been withheld.