So much for the rule of law! How a mob organised by a Marxist primary school teacher, a council legal officer and a TUC staffer successfully stopped police taking away a migrant suspected of overstaying

What does mob rule on the streets of Britain look like? Anyone who looked out of their window in the vicinity of Evan Cook Close in Peckham, South-East London, on Saturday afternoon will already know the answer.

‘I never expected to see anything like this,’ is how one resident summed up the feelings of many to describe the scene which unfolded.

But you can judge for yourself by typing the words ‘Evan Cook Close’ into Google. Film footage, shared on social media, shows outnumbered police coming under siege from hundreds of screaming protesters.

Ironically, the clips, along with a barrage of posts from Left-wing groups, councillors and activists, were supposed to paint the Metropolitan Police in the worst possible light, using heavy-handed tactics against peaceful, law-abiding demonstrators.

‘Police Brutality’ was the caption accompanying one short film.

It shows the exact opposite: officers being violently shoved and abused by the crowd and, in the midst of the chaos, attempting to remove individuals who had fallen to the ground in the melee for their own safety. 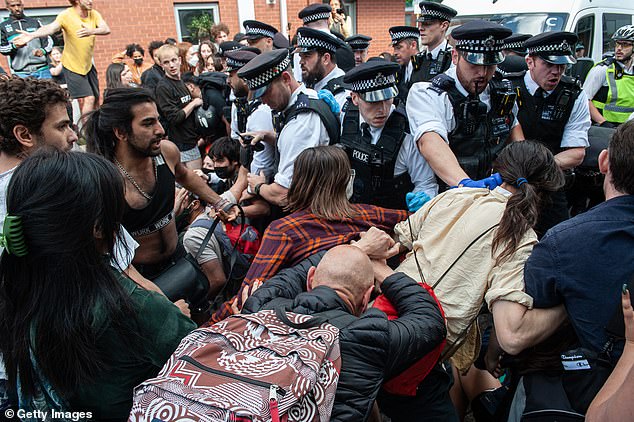 Police scuffle with protestors who blocked an immigration van from transporting a man from a residential area in Peckham on June 11, 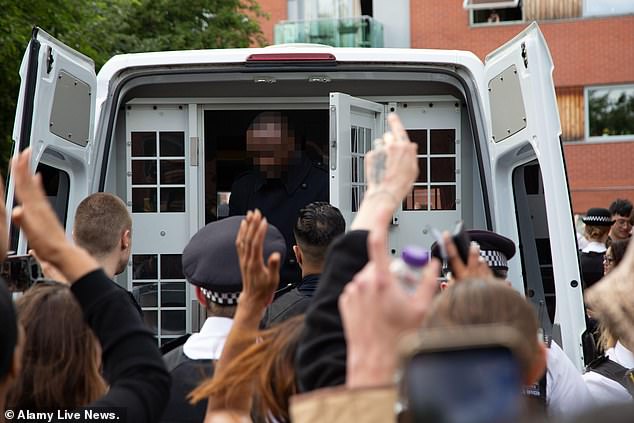 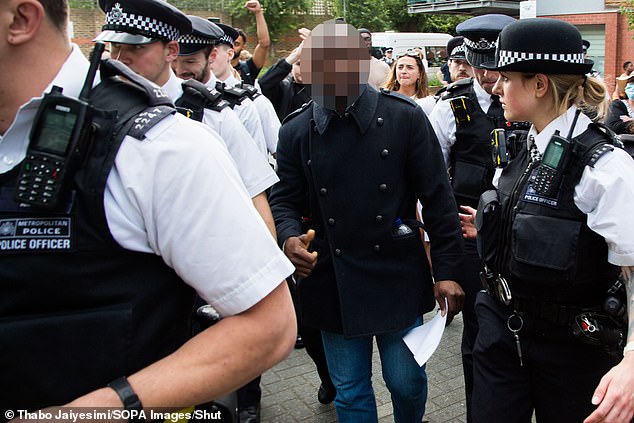 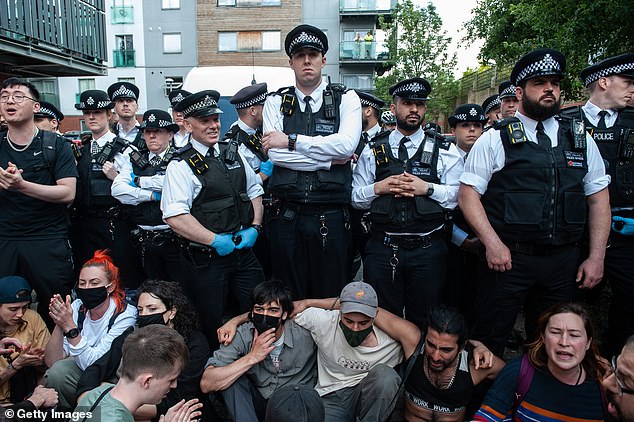 So what was the so-called injustice that lay behind the mayhem?

Just moments earlier, Home Office officials had arrived to arrest a suspected illegal immigrant, a Nigerian from Lagos, who is understood to have overstayed his visa.

But protesters surrounded the van that was taking him to a removal centre for deportation. Hence the reason for police reinforcements.

‘Let him go, let him go,’ they chanted. Four hours later — shortly before 5.30pm — that is exactly what happened. The suspect was released on bail instead of being taken to an immigration removal centre.

Either way, on Saturday afternoon a group of Leftist protesters — whose views, by definition, are not shared by the vast majority of the electorate — succeeded in subverting the democratic process.

Events in Peckham may not have made the front pages, such are the troubled times we live in, but the outcome must have left many wondering who is in charge of the country at the moment.

It comes amid a ‘deluge of legal claims’, to quote a Home Office source, tabled by human rights lawyers to prevent Channel migrants being put on the first flight to Rwanda today. 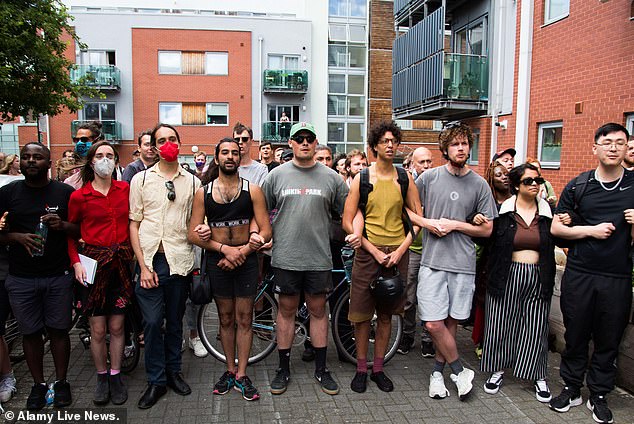 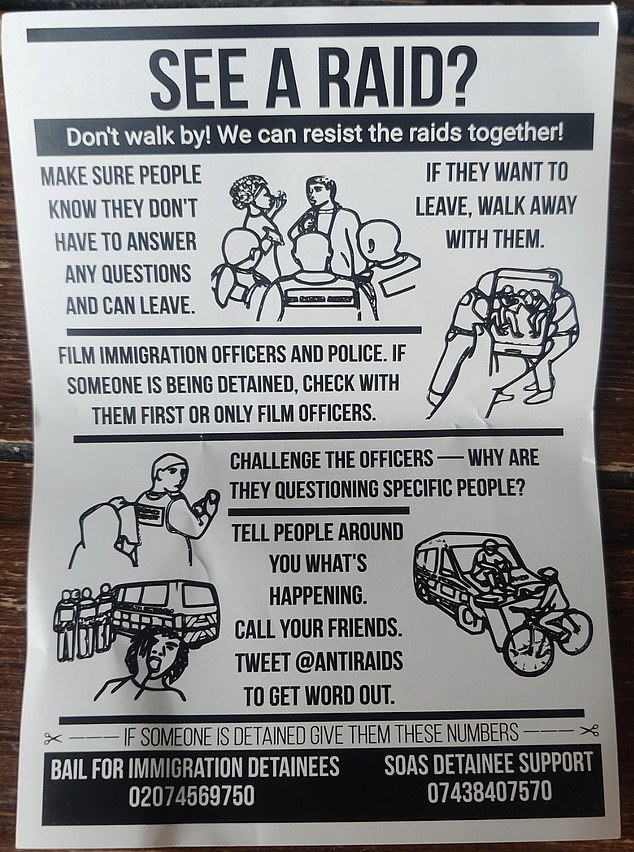 Anti-immigration raid literature has been distributed around Peckham, teaching readers how to stifle police

The suspected illegal immigrant at the centre of the Peckham protest is believed to live alone. Neighbours describe him as a ‘very friendly, very respectful man in his late 30s’. We know little more about him, except he was called ‘James’ and was active in a local church.

But let us agree he was a decent and popular member of the community. Nevertheless, the number of foreign nationals overstaying their visas in Britain, which is widely seen as a major problem, has nearly doubled in five years.

On top of this, almost 10,000 migrants have already crossed the English Channel this year, more than double the 4,200 people who reached the UK by the same stage in 2021.

Almost everyone, apart from the kind of groups represented in Peckham at the weekend, believes an effective immigration policy is essential.

An important element, as harsh as it may sometimes seem, is removing ‘overstayers’. This is precisely what immigration officials, then the police, were prevented from doing in Evan Cook Close.

They were ambushed by political agitators and a number of local politicians, who used the power of social media to summon an estimated 200 people — rent-a-mob might be a better description — to the estate after officials arrived to arrest ‘James’. Two Labour Southwark councillors, James McAsh and Reginald Popoola, played key roles in the subsequent drama.

At 3.05pm, McAsh — a primary school teacher and self-styled Marxist — urged his 15,000 followers on Twitter to ‘get down ASAP … Please RT [retweet] or pass on the message’.

Popoola, who, according to his LinkedIn profile, worked in Brent Council’s legal team, issued his own rallying cry. ‘Police immigration raid in our ward NOW.

‘I’m here with over 100 others,’ his post read. ‘Block the van from taking one of our neighbours — come and join us now on Evan Close SE15!’

Veteran Corbynista Shelly Asquith, a staffer with the Trades Union Congress, made a similar appeal. ‘Peckham people GET DOWN,’ she tweeted. ‘Don’t let them drag away our neighbours!!!’

In fact, James’s actual neighbours weren’t involved in the ugly scenes. Residents we spoke to said they had no idea about the protest until trouble erupted.

This is how a perfectly legitimate intervention by immigration officials turned into a near riot. Among the material being shared by activists at the scene was a flyer, from the aforementioned Anti-Raids Network, recommending people ‘challenge’ immigration officers going about their business. ‘Don’t walk by!’ it urges them.

Suspects themselves are instructed: ‘You do not have to answer any questions. You do not have to let them in … try to leave if you are not under arrest.’ This advice was accompanied by an image of a man fleeing on foot.

The Anti-Raids Network describes itself on its website as a ‘loose network of groups and individuals working to build resistance to immigration raids [arresting people who are suspected of breaking the law] since 2012’. Originally set up by London-based groups including No Borders and Stop Deportation, the organisation is opposed to ‘all immigration controls’.

From 1pm on Saturday, local branches of the Anti-Raids Network in Lewisham, Southwark and Lambeth were tweeting furiously to mobilise activists.

At 5.18pm the group gloated: ‘After four hours of resistance and a crowd of 200 people they’re letting our neighbour go!’ Last night, the group was staging a ‘community building event’ at a local cafe featuring ‘anti-raids training, communal dinner and live music’.

The event was part of a ‘week of action’ of protests, picnics and workshops organised nationally this week by another campaign group, Solidarity Knows No Borders. 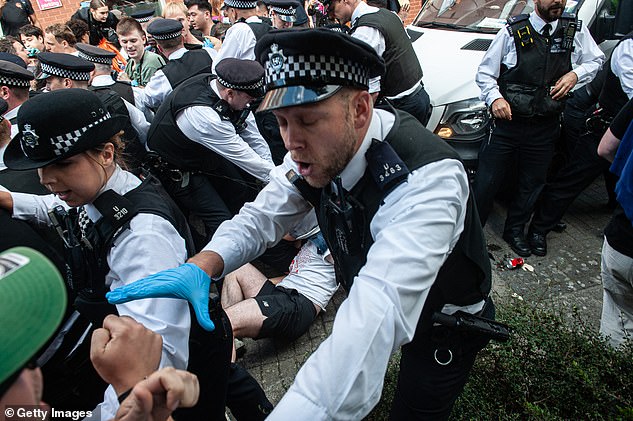 The Peckham protest mirrors a demonstration in Glasgow last year, when police were forced to release two men detained by immigration officers after a stand-off between hundreds of locals who surrounded their van in a residential street.

What such groups — and the councillors who encouraged people to descend on Evan Cook Close — seek to do is paint everyone who does not agree with their extreme views as bigots and racists.

This is particularly true of the collection of Left-wing legal firms who have challenged the government’s Rwanda policy. It is all part of the same wider narrative.

Those earmarked for deportation, for example, are always portrayed as victims: victims of modern slavery, the defence now being used by some who claim they have been exploited or trafficked by criminal gangs; victims of an authoritarian state which is breaking up families by kicking fathers out of the country; or victims of a brutal policy that bears comparison with the Windrush scandal.

These were some of the ‘reasons’ which have been used to stop criminals being deported to Jamaica last year.

In 2018, the deportation of a Somali man was dramatically halted after a mutiny by passengers on a flight that was due to take off from Heathrow who intervened to help him. In a video of the incident, the passengers who took pity on the man screamed: ‘Take him off the plane.’ The four-strong Home Office team were forced to abandon the deportation and remove him from the aircraft.

A time-consuming review of what went wrong is believed to have contributed to an eight-month delay before officials attempted a fresh deportation.

It later emerged that the Somalian in question had been convicted, with three other men, of rape and jailed for nine years for the sickening gang attack on a 16-year-old girl in 2007. It was later reported that he had cost taxpayers £300,000 in legal and jail costs.

The need to deal with this problem is highlighted by another set of statistics from Migration Watch. In 2019/20, it claimed another 25,000 people from 55 countries whose citizens did not need a visa to enter the country could also be remaining here unlawfully, taking the total to around 334,000.

‘Preventing immigration enforcement teams from doing their job is unacceptable,’ a Home Office spokeswoman said. ‘Blocking or obstructing them will not deter them from undertaking the duties that the public rightly expect of them to carry out.’

Is there anyone, apart from the protesters who took to the streets in Peckham, who would disagree with this?