London: Kevin Rudd says he was "blindsided" to learn that the late paedophile Jeffrey Epstein donated $650,000 to the International Peace Institute – a think tank that he has chaired for six years.

The former prime minister was forced to declare that he had been on a teleconference call also attended by Epstein in 2014 and attended an event while an MP in 2013 in New York where Epstein was also invited but has "no recollection whatsoever" of ever meeting the deceased financier. 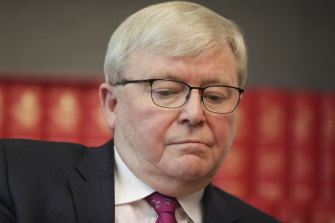 Epstein was already a convicted paedophile who had served time in jail when the financier started donating to the institute. Found dead in his jail cell in August 2019 after he was arrested on sex trafficking charges, Epstein's connections with the global elite have been closely examined – not least his years-long friendship with Prince Andrew.

His other famous connections included Bill Clinton and President Donald Trump and have more recently embroiled a famous Norwegian diplomat Terge Rød-Larsen – who is a friend of Mr Rudd's.

Mr Rudd said he was "blindsided" by the revelations, which only emerged after Norwegian media uncovered financial links between Epstein and Rød-Larsen – who is President of the Peace Institute.

Rød-Larsen and his diplomat wife Mona Juul are famous in the diplomatic world. A play – Oslo – was written about their then-secret role in helping bring about the Oslo Peace Accords.

They are also personal friends of Mr Rudd. 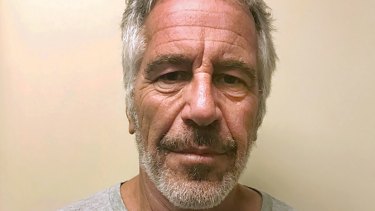 A photo of Jeffrey Epstein, who died in jail in 2019, provided by the New York State Sex Offender Registry.Credit:AP

Norway's Foreign Ministry, which stopping funding the UN-affiliated think tank IPI in 2018, has called on the board to clarify the matter "especially in terms of its own ethical regulations".

The IPI has provided little comment on the revelations until Mr Rudd's statement was issued on Wednesday night (ADST).

Rudd said he had introduced a character test for private donations and was recommending the think tank conduct a probity investigation as well as an independent review into any financial transactions between Epstein and IPI.

The former prime minister said he has ordered Rød-Larsen provide a report to the board and had arranged for the think tank to donate the money bestowed by Epstein's foundations over the years to programs supporting victims of human trafficking and sexual assault.

"I first learned of contributions from Epstein’s foundations to the IPI in November 2019 through reporting by the Norwegian press. I was blindsided by this," Rudd said in his statement.

"Mr Rød-Larsen has apologised to the Board for what he has described as his grave error of judgment. I am deeply disappointed that the Board has had to learn about so much of this through the media."

DN's reporting showed that Rød-Larsen had authorised a payment of $US100,000 ($140,000) to Epstein for work relating to the Mongolian Advisory Board.

The Board was aimed at helping Mongolia implement democratic systems.

Rudd said the Mongolian President asked him to join the board which was being facilitated by the IPI.

At this time, 2013, Rudd was still a member of the Australian parliament and would join IPI's board the following year.

He took part in an event that year that was also attended by the then UN Secretary General Ban Ki-Moon, Israeli Prime Minister Ehud Barak, and Henry Kissinger and John Kerry as well as Rød-Larsen.

He said he attended a teleconference call in 2014. 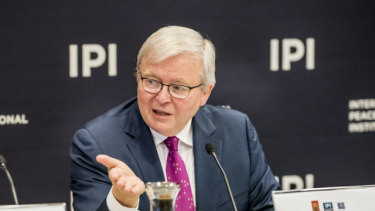 Kevin Rudd at the International Peace Institute in September 2019.

"IPI staff have advised me subsequently that Epstein was apparently among the 10 participants of the teleconference," he said.

He said he turned down payment in 2016 when it was offered because he had not done anything for the Mongolian Advisory Board since that 2014 conference call.

According to the email reported by DN, Rød-Larsen instructed staff to divert the funds earmarked for Rudd to Epstein.

"I had dinner with Kevin yesterday evening, and he said we could keep his share," the email said.

"For form's sake we should send it to Jeff, however I am sure we will get it back many fold!" the email said.

Rudd said he had been advised that Epstein did not receive remuneration for their work on the advisory board.