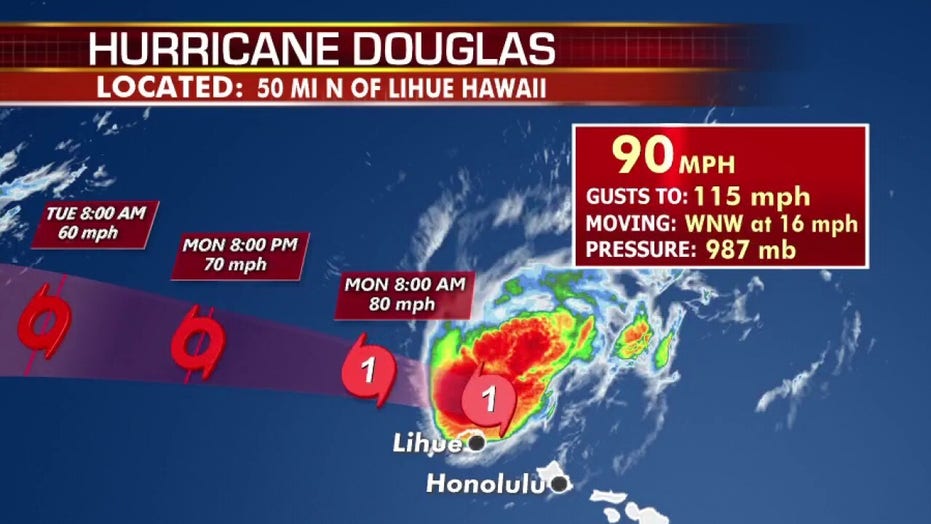 The first hurricane this season in the Central Pacific skirted just north of Hawaii on Sunday night, sparing the island chain of the worst effects from the storm.

The U.S. National Hurricane Center (NHC) in Miami said Hurricane Douglas is still packing maximum sustained winds of 90 mph, a Category 1 storm, and is moving west-northwest at 16 mph. The storm is about 600 miles north of Lihue, Hawaii.

"It just scraped the islands of Hawaii, they are so lucky they didn't get the worst of the rain and the wind and the storm surge," Fox News senior meteorologist Janice Dean said on "Fox & Friends."

As the storm pulls away from the Hawaiian islands, the last of Douglas' rain bands will leave the island of Kauai by late Monday morning. 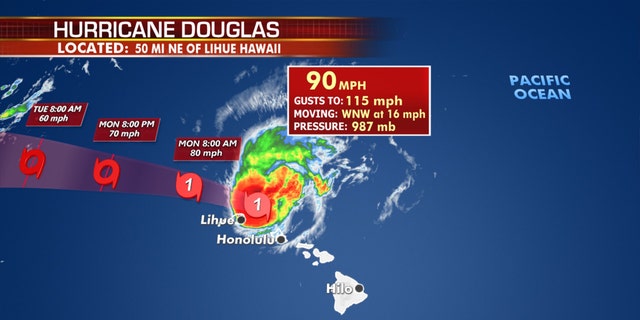 The NHC said Douglas actually intensified slightly as it moved north of Kauai. 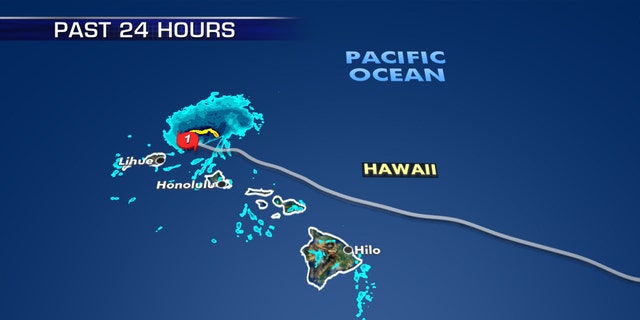 Hurricane Douglas skirted the Hawaiian islands on Sunday, with the worse effects from the storm remaining away from the islands.
(Fox News)

The core of the system just missed the Islands without making a landfall.

“We hope that we dodged a bullet,” Hawaii Gov. David Ige told the Honolulu Star-Advertiser Sunday night. “We were fortunate in that we did not have major flooding or major dislocations." 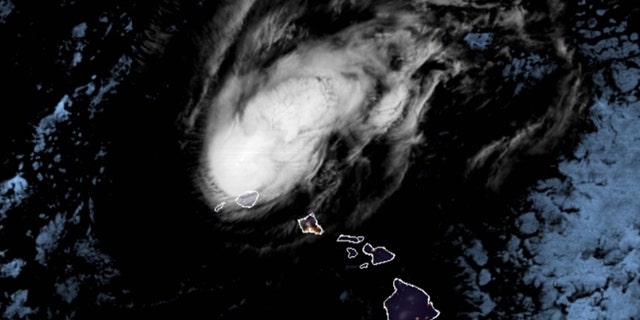 As the storm made it's way past the Hawaiian islands on Sunday, heavy rain and wind gusts battered Maui, downing a small tree on the Hana Highway.

Duke Stevens, who lives in Hana on Maui’s eastern tip, told the Associated Press that by the afternoon on Sunday, there was was no longer any wind and any light rain had stopped. 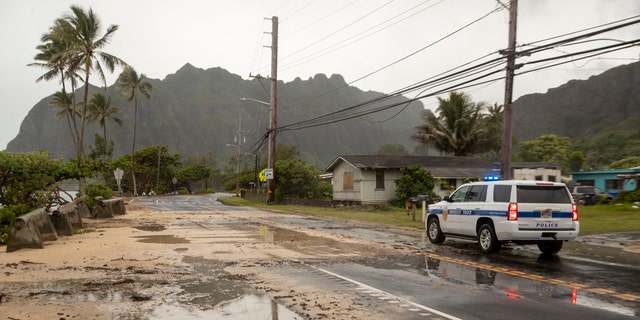 A police officer with the Honolulu Police Department inspects the sand and debris washed onto a closed portion of Kamehameha Highway, Sunday, July 26, 2020, in Kaaawa, Hawaii.
(AP Photo/Eugene Tanner) 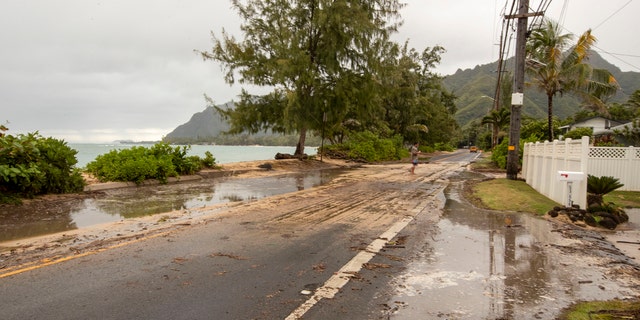 Other roadways on Oahu were also closed at various points due to storm debris, KHON2 reported.

HURRICANE DOUGLAS BEARS DOWN ON HAWAII AS ISLANDS BRACE FOR HIGH WINDS, RAIN, AND STORM SURGE

The Hawaii Department of Transportation shared a video of flooding on a section of Route 450 in Molokai as the storm passed by.

Even with dangerous ocean conditions, surfers rode waves and residents took selfies at a lookout point next to the ocean. 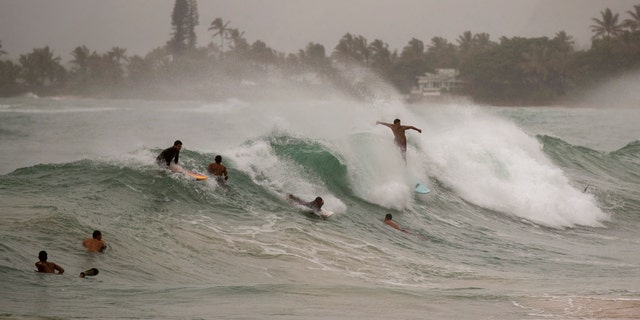 Heavy surf and swells will continue for the Hawaiian islands over the next several days. 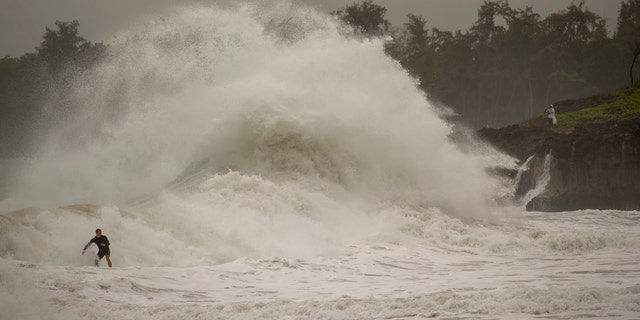 Antonia Hall, of Kihei in west Maui, said the storm avoided her area, although she and others were prepared for the worst.

“Maui has skirted so many hurricanes,” she said. “This is just kind of something we go through here.”

State officials preparing for the worst had opened shelters in advance of the storm. 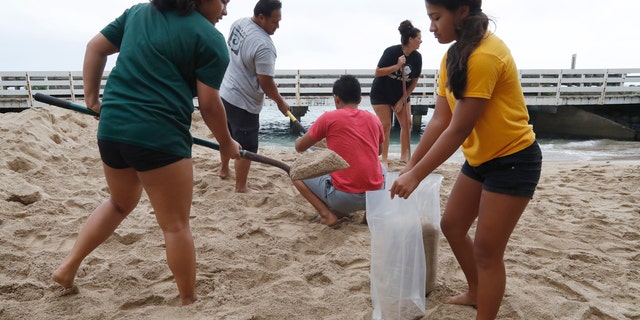 The Keo family assisted the Aubrey family with sandbagging for the preparation of Hurricane Douglas in Hauula, Hawaii, on Sunday, July 26, 2020.
(Cindy Ellen Russell/Honolulu Star-Advertiser via AP)

About 300 people evacuated to the Hawaii Convention Center on the edge of Waikiki. On Maui, 22 people were at five shelters around the island. 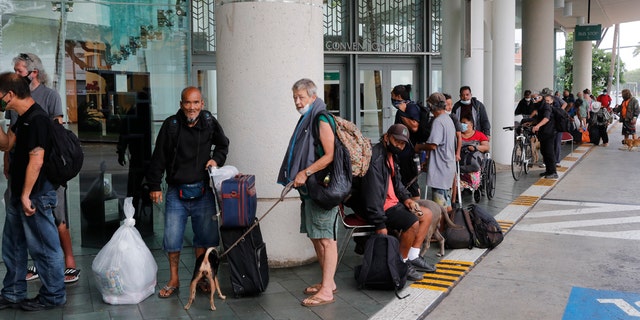 Evacuees wait to be screened prior to entry into the Hawai’i Convention Centerâ€”an American Red Cross shelter set up in advance of Hurricane Douglas, Sunday, July 26, 2020, in Honolulu.
(Jamm Aquino/Honolulu Star-Advertiser via AP)

Evacuees were told to bring masks and hand sanitizer along with the usual emergency supplies of food and water. People also were required to wear face coverings to be admitted and had to wear them unless they are eating, drinking, or sleeping.

Forecasters said Douglas could have been a whole lot worse had its track been about 20 to 30 miles to the south. 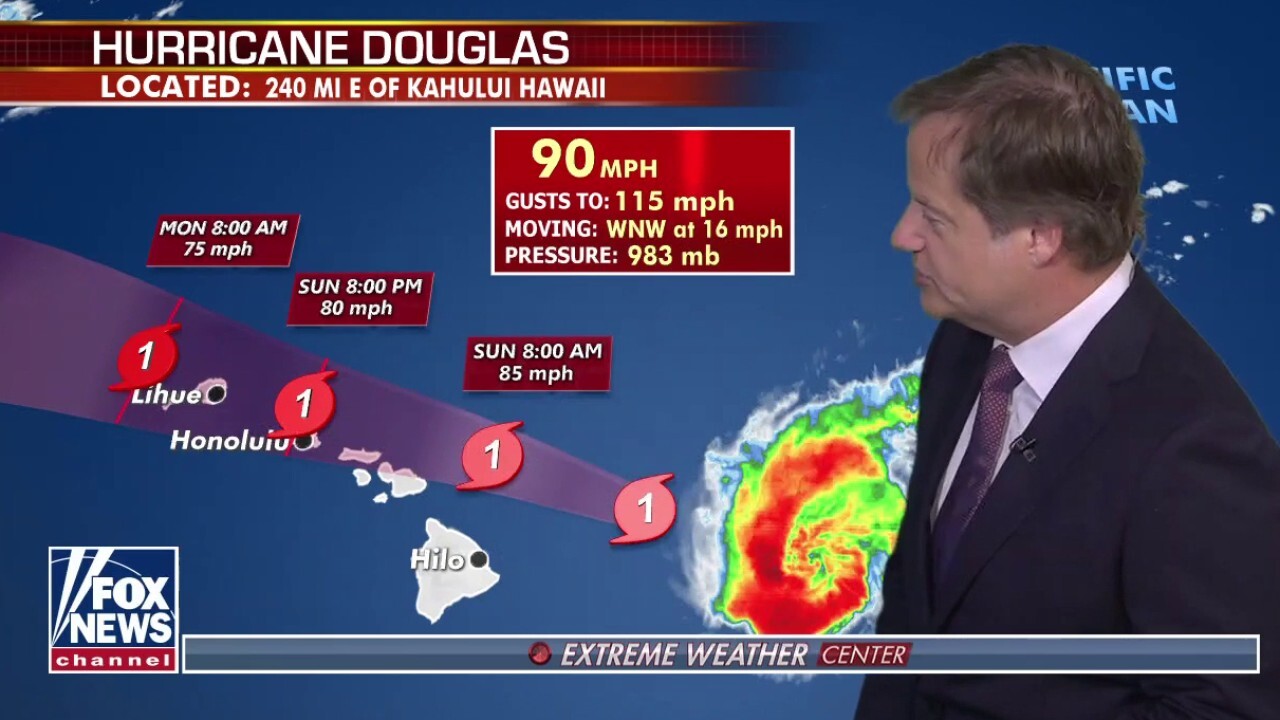 The hurricane's track put the island chain near the southwest quadrant of the storm, which is often less destructive than the northeast and the right side of a hurricane's eye, according to Eric Lau, a meteorologist with the National Weather Service in Honolulu.

“We were really playing with a really fine line, a razor-thin line between what we’ve experienced today compared to what we could have experienced,” he told the AP.