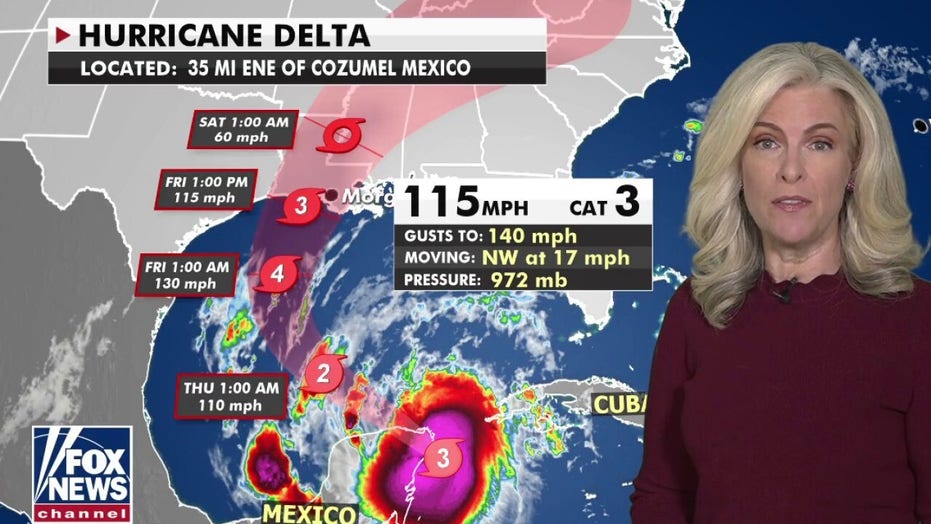 An extremely dangerous Hurricane Delta roared onto Mexico's Yucatan Peninsula on Wednesday, but the storm's path accompanied by forecasted restrengthening has officials along the U.S. Gulf Coast warning residents to get prepared.

The National Hurricane Center said while Hurricane Delta is now a Category 2 storm with 105 mph winds, the storm may once again get super-charged as it heads over the warm waters of the southern Gulf of Mexico by Wednesday night.

"It’s going to weaken a little bit because it’s over land but then we expect it strengthen again into a major hurricane, perhaps another Category 4 as we get into tomorrow," Fox News senior meteorologist Janice Dean said on "Fox & Friends." "And then Friday, we're bracing for impact here."

As it moves into the Gulf of Mexico, Delta is expected to grow into a “considerably larger” storm before striking the U.S. Gulf Coast. 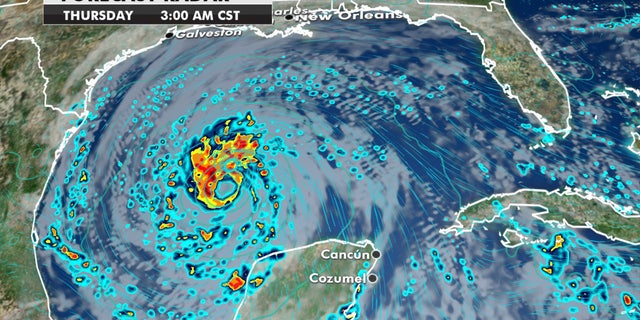 Hurricane Delta is forecast to strengthen once it re-enters the Gulf of Mexico.
(Fox News)

"We're expecting it to move into the Gulf of Mexico and then make another landfall across the coast of Louisiana," Dean said Wednesday. "We think on Friday, Friday afternoon into Friday evening." 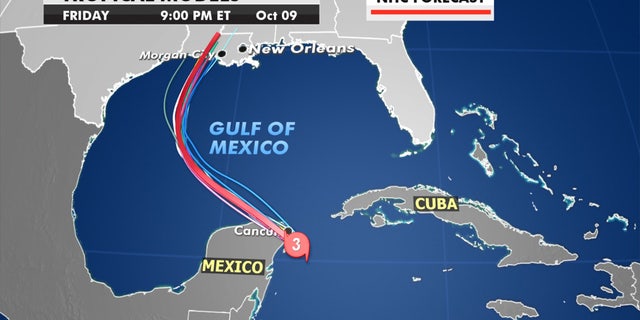 People in Louisiana or Mississippi should prepare now for hurricane-force winds to begin hitting their coastlines on Friday, the hurricane center advised. 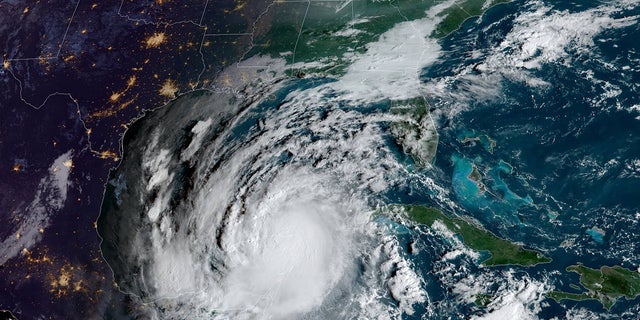 Hurricane Delta can be seen after making landfall on Mexico’s Yucatan Peninsula on Oct. 7, 2020.

State and local officials in coastal areas were shoring up levees, sandbagging, and taking other protective measures, he said.

Louisiana is still recovering from Hurricane Laura, which ravaged the southwestern region as it roared ashore as a Category 4 storm in August.

“We have seen an active hurricane season already, with a devastating hit in Southwest Louisiana from Hurricane Laura," Bel Edwards said at a briefing. "It would be a mistake for anyone in Louisiana to let down their guard. Be prepared." 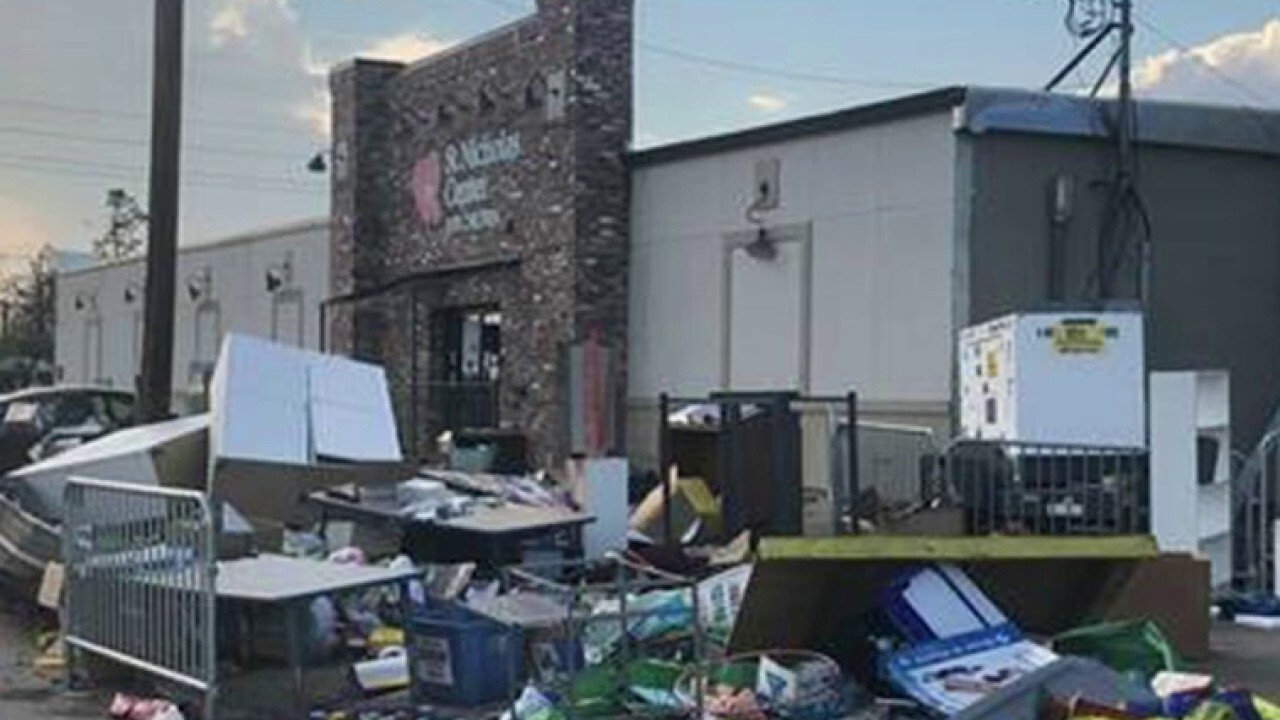 More than 6,600 Laura evacuees remain in hotels around the state, mainly in New Orleans, because their homes are too heavily damaged to return.

Some Hurricane Laura evacuees said Tuesday there were text messages telling them they have to leave their hotel rooms ahead of the approaching storm, leading to confusion.

“The last week and a half, it’s been tumultuous for us because the uncertainty that we had in the beginning is now multiplied times a hundred because we’re being forced to go back to where we came from,” Lake Charles resident Alesa Davis said. 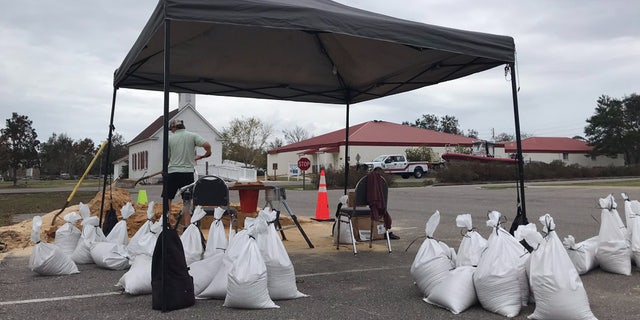 Officials in Orange Beach, Ala. were handing out sand and sand bags in preparation for Hurricane Delta.
(City of Orange Beach/Twitter)

In a statement to Nexstar Media, the American Red Cross said, "an effort to best support longer-term recovery needs, several non-congregate shelter facilities (hotels) across Texas and Louisiana will transition and consolidate over the next several days." 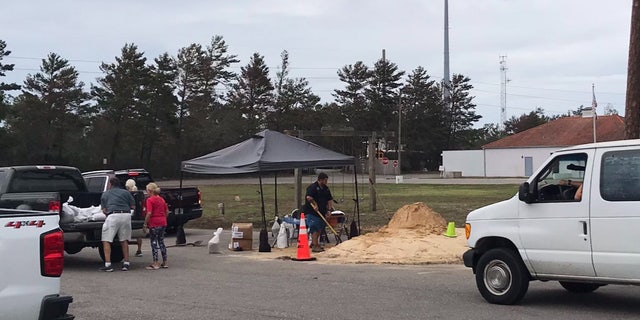 Officials in Orange Beach, Ala. were handing out sand and sand bags in preparation for Hurricane Delta.
(City of Orange Beach/Twitter)

"Residents who are believed to have sustained little to no visible damage to their homes are being welcomed with open arms back to their home parishes," the Red Cross aid. "A considerable amount of infrastructure has been restored in impacted communities, including power and water, and many restaurants as well as stores are open for business."

A mandatory evacuation was ordered in Grand Isle, which has been flooded six times this year from tropical storms and passing hurricanes. A levee damaged during Cristobal may make matters worse.

“We are looking at 300 feet of breach and will be placing super sacks with 63 smaller sacks embedded in it,” Major Noel Bellas with the Louisiana National Guard told FOX8.

Alabama Gov. Kay Ivey declared a state of emergency on Tuesday based on Delta’s “potential to make landfall in or near Mobile and Baldwin counties,” in addition to ordering a mandatory evacuation of coastal areas for visitors and tourists.

The city of Orange Beach was preparing for impacts, providing sand and sandbags to residents to help with storm preparations.

Emergency officials in Alabama still cleaning up from Hurricane Sally said they were cautious about the state of the power grid. Hurricane Sally made landfall last month in coastal Alabama, bringing damaging impacts along the Gulf Coast into Florida's Panhandle region.

HOW STRONG CAN HURRICANES GET? HERE'S A BREAKDOWN OF CATEGORIES AND THE SAFFIR-SIMPSON WIND SCALE

Lingering damage and weakened trees bring the concern that Delta could cause even more problems in the area.

“Being impacted by a storm within 20 days of landfall that Sally made, it could be catastrophic to our area,” Ingram said.

On Florida's Panhandle, which was surprised when Hurricane Sally shifted east and brought damaging storm surge to the area, officials used residents not to be caught off guard and declared local states of emergency.

"I continue to say this is an act of God, so I would say, pray," Gilley told the paper. "Because I think that we need we all need some protection."

Delta has forced thousands into shelters in Mexico, where the storm made landfall Wednesday morning as a Category 2 storm. Oil companies operating in the Gulf of Mexico have also told non-essential staff to evacuate their offshore platforms, Reuters reported. 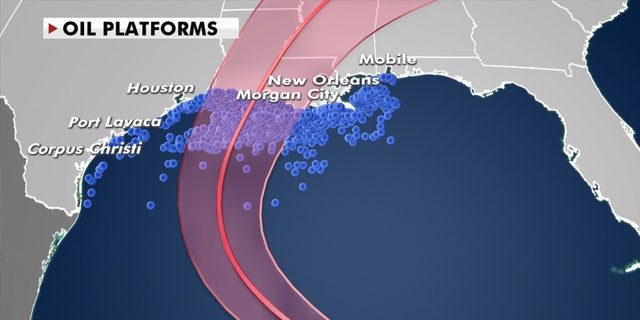 Hurricane Delta’s path and oil platforms in the Gulf of Mexico.
(Fox News)

If the storm makes landfall in the U.S., it would be the 10th storm to do so this season, which could break the record for storms to directly strike the continental U.S. 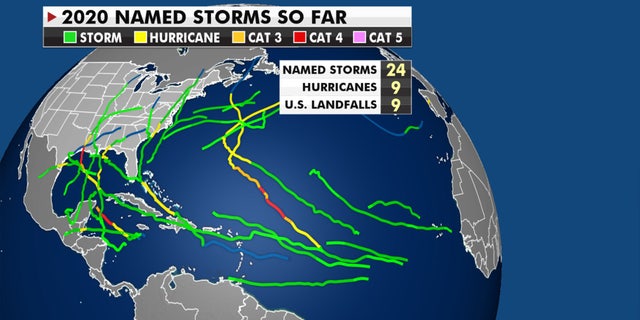 "That has never happened before in our history, to have 10 named storms make landfall in one season," Dean said Wednesday.

Fox News' Janice Dean and The Associated Press contributed to this report.