Detectives have interviewed the Manchester City star, 24, but have not yet arrested the middle-aged man with glasses accused of screaming racist abuse at Stamford Bridge on Saturday night.

The incident has caused outrage and Mr Sterling has been praised for the way he laughed in the face of the abhorrent abuse.

Today Scotland Yard confirmed it has not yet identified the supporter who appeared to call the winger a ‘f****** black c***’ when he collected the ball.

But officers are working with Chelsea to identify him and are studying CCTV footage in the stadium and TV pictures from BT Sport. 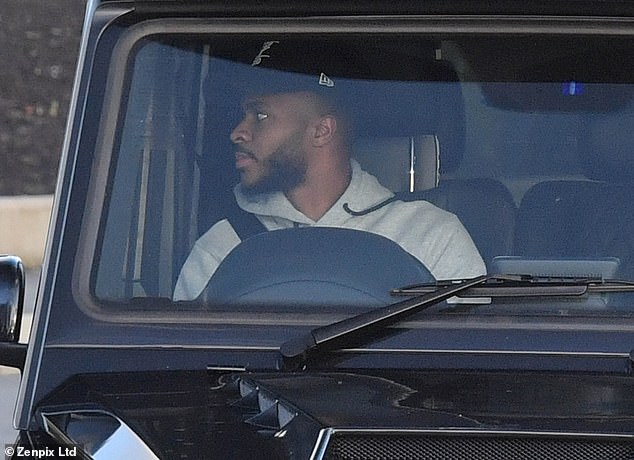 The England winger was pictured for the first time since revealing he ‘had to laugh’ at fans who appeared to call him a “f****** black c*** at Stamford Bridge.

The England star put on a brave face as he was photographed leaving his club’s training ground in a black Mercedes 4×4 yesterday afternoon.

Sterling was interviewed by members of the Metropolitan Police on Sunday, who travelled north as part of their investigation into an incident during Manchester City’s match with Chelsea.

He confirmed to police he had heard racist insults and other foul language as he went to collect a ball for a corner near the Matthew Harding Stand.

Some of the biggest names in the world of football have praised the footballer.

Viv Anderson, the first black footballer to play for England, wrote in the Daily Mail today: ‘Raheem Sterling laughed in the face of those who he says racially abused him at Chelsea. What a powerful thing that was to see. It was the way those of us who have known discrimination have been dealing with it for years’.

Former Manchester United captain Rio Ferdinand suggested that footballers in England should be inspired by Colin Kaepernick’s kneeling gesture and launch their own bid to fight back against racism after this latest worrying incident.

Twitter users highlighted a first-half incident when a supporter at Stamford Bridge appeared to mouth the phrase ‘f****** black c***’ towards Sterling as he collected the ball in front of a section of Chelsea fans.

Pictures of the moment and a video widely circulated on social media appeared to confirm this, with one spectator allegedly making the racist comment amid a barrage of aggressive abuse from Chelsea fans towards Sterling. 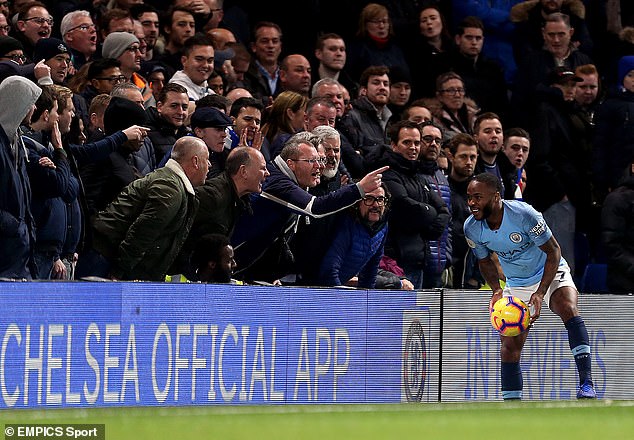 The Met Police confirmed they are investigating an incident of alleged racist abuse towards Sterling. The man alleged to have committed the offence is obscured in this picture, which shows a number of other Chelsea fans jeering the player 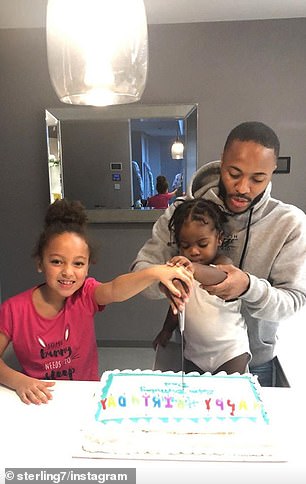 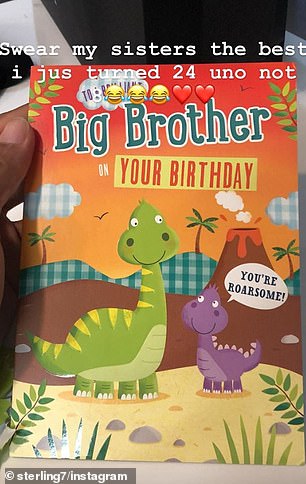 Ex-Manchester United defender Rio Ferdinand made his views known, posting on Instagram and Twitter: ‘Are we going to continue to allow this type of racist behaviour go on??? All for kicking a ball!’

Raheem Sterling posted a statement on Instagram on Sunday morning addressing the incident at Stamford Bridge. It read:

‘Good morning. I just want to say I am not normally the person to talk a lot but when I think I need my point to (be) heard I will speak up.

‘Regarding what was said at the Chelsea game as you can see by my reaction I just had to laugh because I don’t expect no better.’

Sterling also said that he believed black players and white players were not treated equally by the media, including the Daily Mail and Mail Online, and that he believes this helps ‘fuel racism and aggressive behaviour’.

Ferdinand’s younger brother Anton was racially abused in a match against Chelsea in 2011. Blues captain John Terry was banned for four matches and fined £220,000 after admitting using the word ‘black’ and swearing at Anton, although he claimed he had only been repeating words he thought the then-QPR defender had accused him of saying.

Ferdinand replied: ‘In the NFL the players took to the knee…’ He was referencing a movement spearheaded by former quarterback Kaepernick, who began a trend of kneeling during the US national anthem in protest against racism in America. Kaepernick famously explained his position: ‘I am not going to stand up to show pride in a flag for a country that oppresses black people and people of colour.’

Former Arsenal striker Ian Wright also weighed in on social media, saying he is under no illusion as to what was said by the fan to Sterling. Wright said: ‘The bad old days are back! Chelsea you have been shamed by this disgusting racist fan! absolutely no doubt about what he says.’

Match of the Day host Gary Lineker branded the incident ‘despicable’ while BT Sport presenter Jake Humphrey said: ‘If indeed it is proved to be racist abuse then I hope it’s a lifetime ban. No place for it in this world.’ 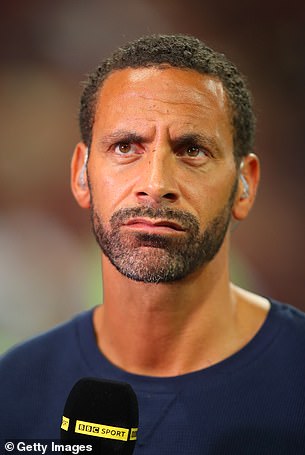 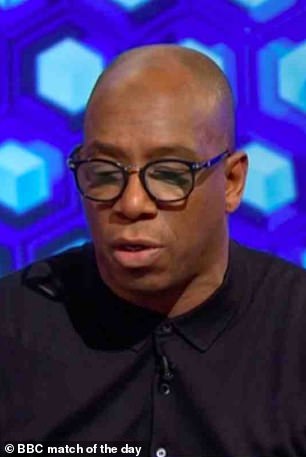 Pundit and former Manchester United captain Rio Ferdinand expressed his disgust online on Saturday evening; Match of the Day pundit Ian Wright tweeted: ‘The bad old days are back’ and ‘absolutely no doubt about what he says’ 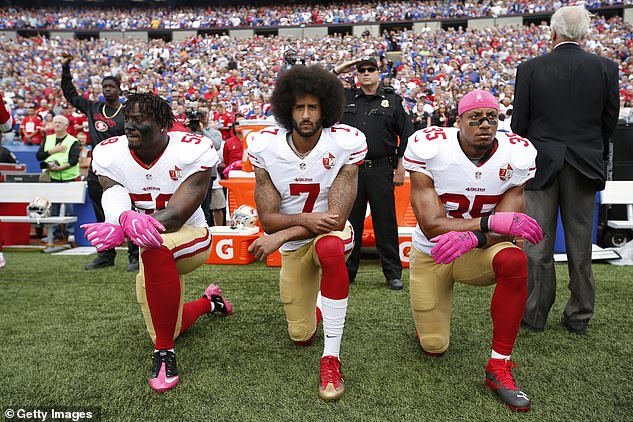 Sterling posted a statement on Instagram on Sunday morning addressing the incident at Stamford Bridge. It read: ‘Good morning. I just want to say I am not normally the person to talk a lot but when I think I need my point to (be) heard I will speak up.

STATEMENT FROM KICK IT OUT 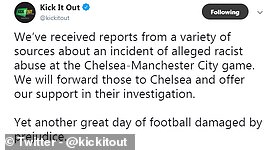 Here is the Kick It Out statement in full:

‘What happened at Chelsea shows what is still going on in football.

‘Where is (Premier League executive chairman) Richard Scudamore? Where is (FA chairman) Greg Clarke? Where is Chelsea’s chairman (Bruce Buck)? They should have been talking about it last night and it has to be dealt with at the top.

‘We do not have any leadership at the top of the game to speak out, they rely on Kick It Out. We have already made comments about the way Raheem Sterling has been treated differently by the media. The print media often targets not just black players, but all footballers.

‘Raheem Sterling has received bad press over the last few years because of his lifestyle, and clearly there are issues from potential stories adding to prejudice and I have every sympathy for him. Players know if they are abused in any way they have to tell the referee. It was awful. All players know the referee is in charge and has a duty of care, and the referee can remove those people. It didn’t appear to me he told the referee in the first place.

‘Regarding what was said at the Chelsea game as you can see by my reaction I just had to laugh because I don’t expect no better.’

Sterling also said that he believed black players and white players were not treated equally by the media, including the Daily Mail and MailOnline, and that he believes this helps ‘fuel racism and aggressive behaviour.’

A Chelsea spokesman said: ‘We’re aware of reports and video footage. We will investigate the matter and take the strongest possible action where necessary.’

A Football Association statement read: ‘We take all allegations of discrimination extremely seriously and will work with the clubs and the relevant authorities to ensure this matter is dealt with appropriately.

‘We strongly condemn all forms of discrimination and encourage all fans and participants who believe that they have been the subject of, or witness to, discriminatory abuse to report it through the appropriate channels: The FA, our County FAs or our partners Kick It Out.’

The Met Police said: ‘We are aware of a video circulating online in which it is claimed racial abuse was allegedly directed at a player at a Chelsea v Manchester City game at Stamford Bridge on Saturday, December 8.

‘We will review the footage to determine whether any offences have been committed.’

No arrests have been made, the Met added.

Should any offence have been made, a life ban could be handed to the supporter or supporters responsible.

Anti-discrimination charity Kick It Out later issued a statement, which read: ‘We’ve received reports from a variety of sources about an incident of alleged racist abuse at the Chelsea-Manchester City game.

‘We will forward those to Chelsea and offer our support in their investigation.

‘Yet another great day of football damaged by prejudice.’