Hundreds of motorists get bus lane fines totalling £50,000 after restrictions are suspended for Idris Elba and Jason Statham film shoot then reinstated without anyone being told

Hundreds of motorists diverted during filming for a Hollywood movie were hit with £60 penalty notices – because someone forgot to remove a sign.

Glasgow City Council rakes in more than £1million a year from the bus gate at Nelson Mandela Place in the city centre.

But last month, the restriction on cars and vans was suspended to allow streets to be shut off for the filming of Hobbs and Shaw, starring Idris Elba and Jason Statham.

However, when the restrictions were reinstated, someone forgot to move a sign. 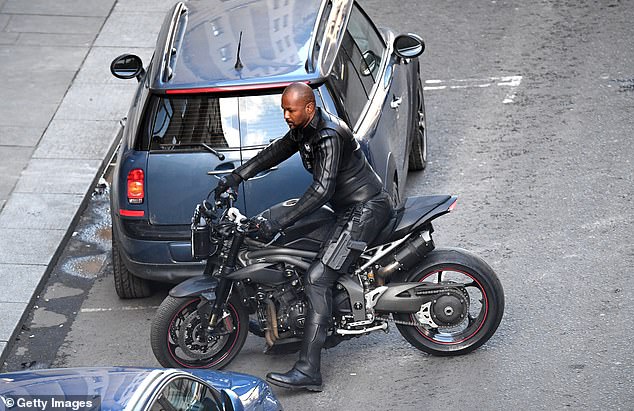 A stunt double for Idris Elba on a street in Glasgow during the filming of Hobbs and Shaw. Changes in road restrictions during the shoot led to 800 drivers getting sent fines

The camera was active – and 817 demands for £60 started dropping onto door mats. The fine can rise to £90 if it goes unpaid after a month.

One motorist had his fine ripped up by the council after he submitted an appeal. He said: ‘I just wonder how many people just paid up and didn’t appeal?

‘I was puzzled when it came in because I clearly remembered the signage saying the bus lane was suspended.

‘This is not the way to run a road system, when you’re firing out fines that weren’t meant to be issued.

‘At the end of the day, we pay enough in terms of parking fees in Glasgow without having rogue fines issued just because someone didn’t do their job properly. It’s a shambles.’

The council shut off a series of streets around George Square last month while the movie was being shot. 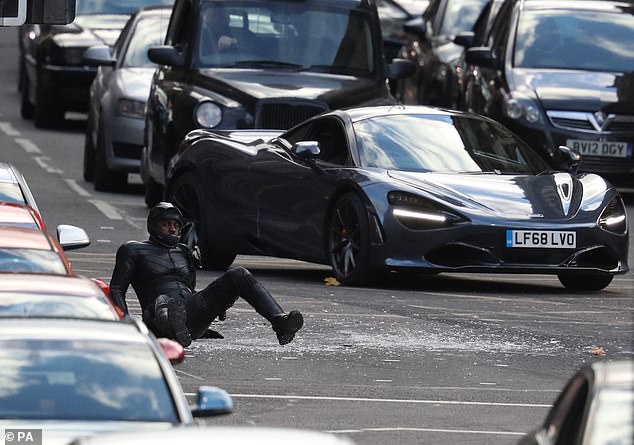 The film is a spin-off of the Fast and Furious series and features Elba, Jason Statham and Dwayne Johnson, best known as The Rock

The Universal Pictures film stars Statham, Elba and Dwayne Johnson in a spin-off from the Fast and The Furious franchise.

The council believes the mix-up happened when one of the production crew wrongly changed a street notice, on one day of filming, diverting motorists into Nelson Mandela Place.

A spokesman said: ‘A total of 817 notices were issued in that bus lane in West George Street and Nelson Mandela Place on October 28.

‘All have been cancelled and we have contacted those affected to apologise.’

The Mail has previously told how the city-centre camera snares a driver every five minutes and has raked in up to £4.5million since the restrictions were imposed.

Almost 80,000 motorists have been caught in Nelson Mandela Place, despite warning signs and road markings alerting drivers to the restrictions. 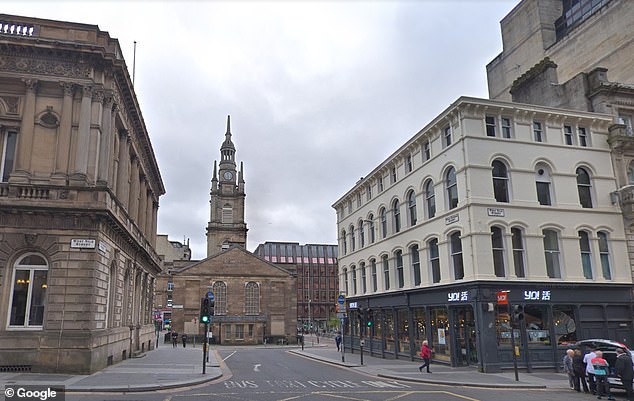 Motorists say the signs are confusing and the timing of the restriction makes it difficult as the bus gate is in operation only from 7am until 7pm.

Drivers are fined £60, halved if they pay within two weeks. One in five penalty notices has been contested and 1,272 appeals have been successful.

Glasgow City Council has imposed 78,156 fines since the camera was installed.

The authority has been keen to develop its status as one of the most popular urban film sets in the country, advertising a free liaison service to movie producers.

The fact that streets in the city centre are laid out in a ‘grid’ system mean it has doubled as Philadelphia, New York, San Francisco and London for a host of Hollywood blockbusters.

Last month’s shoot is expected to have given the city’s hospitality industry a seven-figure shot in the arm.

At the time, Glasgow City Council deputy leader David McDonald said: ‘It is great to see another major film production coming to Glasgow, another example of the confidence the industry has in the city’s ability to host shoots of this size.

‘The council’s Glasgow Film Office has been working closely with the production to identify locations and making sure the shoot goes as smoothly as possible, while minimising the impact on the daily life of the city.

‘Major productions such as this bring a great boost to the local economy.

‘Glasgow loves cinema and it is good to know that we will see the streets of the city shown all over the world when this film is released.’