How to appeal against your A-level results: Ofqual reveals details on how pupils can contest their marks using mocks from Monday amid expected stampede with GCSE chaos to follow

Exams regulator Ofqual has revealed details on how students can appeal against their A-level results using grades from mock tests.

The Government announced late on Tuesday that A-level and GCSE students will be able to use results in valid mock exams to appeal if they are unhappy with their results.

But universities, schools, teachers and students have been demanding clarity over how the process will work.

Ofqual said it would allow non-exam assessment marks to be used to ‘make sure this opportunity is available to a wide range of students, including those who had not taken a written mock exam before schools and colleges closed’.

It also confirmed no grades would be lowered as a result of an appeal. 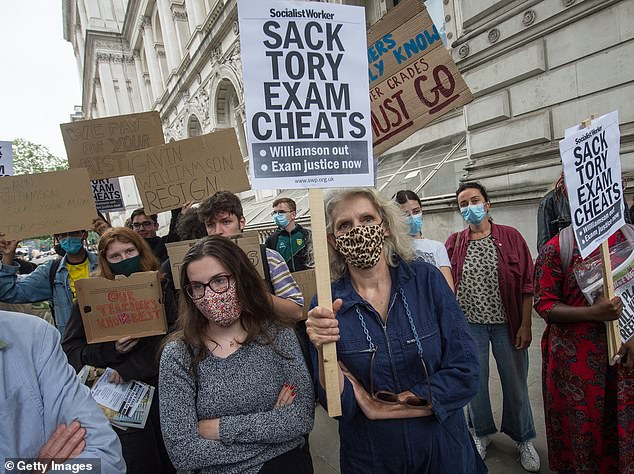 Pictured: Students and parents hold a placards on Whitehall outside Downing Street in London on Friday, after nearly 40 per cent of results were downgraded by the computer model deployed when exams had to be cancelled due to the coronavirus crisis, affecting disadvantaged areas most 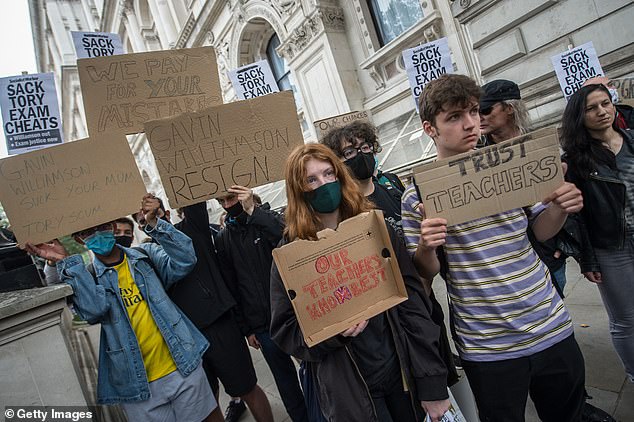 Agony of teens left in limbo

Lucy Lipfriend has been left in limbo for a second year after missing out on her Cambridge University place.

The 19-year-old needed to achieve A*AA in her A-level resits this summer to study theology, religion and philosophy of religion at Clare College.

But the teenager, from Northwood, north-west London, was downgraded to three Bs by the computer algorithm after exams were cancelled.

She believes this was due to her poor performance in last year’s A-level exams – which she took when her mother Tina had been diagnosed with breast cancer – being taken into account.

Her grades slipped to a C in philosophy, a B in English literature and an E in maths last summer, despite high teacher predictions. Lucy took a year out, planned to resit the exams as a private candidate, and won a Cambridge offer. After exams were axed, her former teachers at St Helen’s, a private day school in Northwood, submitted grades of A*AA.

Three private tutors, who helped her over the last year, predicted three A*s.

But her grades were pulled down and her university place hangs in the balance – depending on her appeal.

Lucy said: ‘I’ve worked really hard for a year and through no fault of my own I haven’t been able to get a place at the university I’ve always dreamt of going to. Grades shouldn’t be determined by a computer.

Lucy says Cambridge has encouraged her to appeal, but she must get her grades overturned by August 31.

She said: ‘Having promised that students will be able to use a valid mock result, the reality is that many will not receive these grades even if they represent a student’s best result.

‘The latest chaos is the inevitable consequence of this Government’s shambolic approach to exams, which saw solutions dreamt up on the back of a cigarette packet and announced barely a day before young people received their results.

‘This is simply not good enough for young people and their families.’

The regulator said mock grades would be valid if they came from appropriately supervised assessments where there was ‘no possibility of correction’, provided the assessment was produced by a relevant exam board or developed by a teacher in line with a previous exam.

Mock grades must also have been marked in line with an exam board’s regular standards and assessments must have been completed and graded by March 20 2020.

Ofqual confirmed appeals using mock results could begin from Monday and would apply for GCSE, AS and A-level students as well as those taking Extended Project Qualifications and Advanced Extension Award in maths.

Geoff Barton, general secretary of the Association of School and College Leaders, criticised the process, branding it ‘surreal and bureaucratic’.

He said: ‘This is clearly a face-saving exercise by a Government which has said that it won’t do a U-turn on its pledge that moderated grades will stand, come what may.

‘Instead, it is attempting to remedy the grading fiasco through an appeals process so surreal and bureaucratic that it would be better off at this point doing that U-turn and allowing original teacher-assessed grades, where they are higher, to replace moderated grades.

‘That would be a better approach than this appeals system as it would mean students would get revised A-level grades immediately on the basis of the teacher assessments already conducted, which draw on the very evidence that is now proposed as part of the appeals process.’

He added: ‘We don’t blame Ofqual for the bizarre nature of the appeals criteria. The regulator has been given a hospital pass by a Government that is in disarray.

‘It is time for ministers to stop the chaos and fall back on teacher-assessed grades rather than prolong this nightmare.’

The news comes as the Welsh government has also confirmed students in Wales will be able to appeal against their A-level grades if they are lower than their teachers’ predictions.

There has been an outcry in Wales after 42% of all A-level grades were lowered during the moderation process.

Education minister Kirsty Williams said appeals would be allowed if ‘there is evidence’ pupils should have received higher grades. 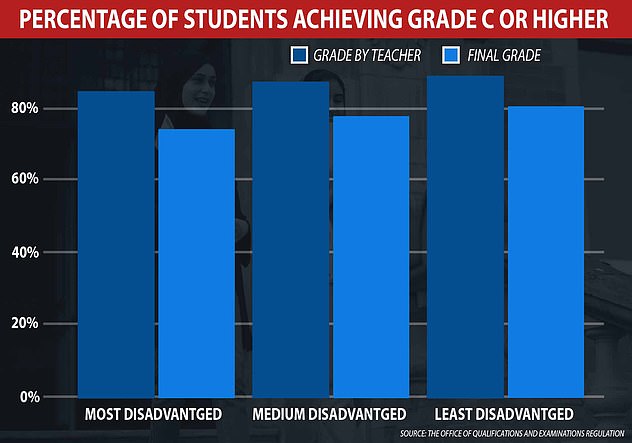 Before the results were published on Thursday, Ms Williams announced that final grades would not be lower than pupils’ earlier AS results.

‘Earlier this week I directed Qualifications Wales to broaden the grounds for appeal for A-levels, AS, Skills Challenge Certificate and GCSEs,’ she said.

‘Today, they have now confirmed what this means for students.

‘I accept that learners wanted and needed more clarity, and I believe this achieves that.

‘Qualification Wales and the WJEC will share the full details, but appeals can now be made where there is evidence of internal assessments that has been judged by the school or college to be at a higher grade than the grade they have been awarded.

‘There is a guarantee that no-one will receive a lower grade after appeal and all appeals are free.’

Regulator Qualifications Wales said schools would be able to appeal to exam board WJEC if they:

– they used the wrong data when calculating a grade

– there was some other procedural failing on the part of WJEC

– there is evidence of internal assessment that has been judged by the school or college to be at a higher grade than the calculated grade awarded.

The regulator said that no grades would be lowered as a result of an appeal and would either go up or stay the same.

The moderation system overseen by Qualifications Wales and WJEC has been criticised by pupils, teachers, unions and opposition politicians.

This year’s exams were cancelled across the UK because of the coronavirus lockdown and there are fears the replacement grading system will create a postcode lottery. 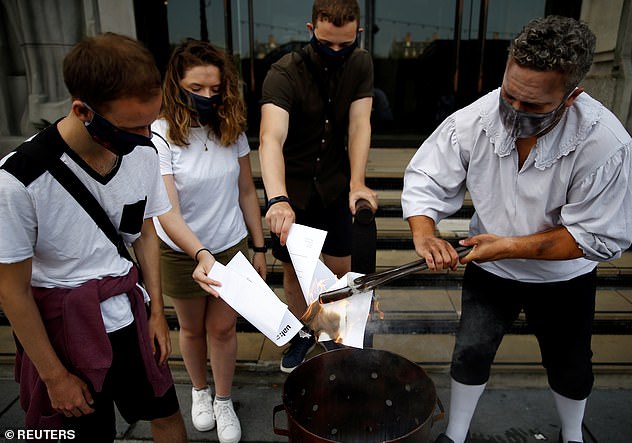 A record 29.9% of students recorded an A or A* grades, which is less than the 40.4% who were estimated to receive top grades by teachers.

The Joint Council for Qualifications said the grades submitted by schools and colleges were ‘optimistic and, without standardisation, would have produced atypically high outcomes’.

‘If this approach is being advocated by the UK Labour leader in England, why is the Labour First Minister in Wales so stubbornly against?’

The Senedd’s children, young people and education committee will be recalled on Tuesday and has invited the Welsh Government, Qualification Wales and WJEC to provide information and answer questions.

Committee chair Lynne Neagle said: ‘Given the significant concerns and complexities surrounding the awarding of exam results this year we will be meeting urgently to seek clarity for those who’ve been through this challenging process in unprecedented times.’