Animated graph shows how Luxembourg has the world’s most coronavirus infections per head, ahead of Spain and Switzerland

This animated graph shows how the coronavirus pandemic has evolved when measured by cases per head – putting Luxembourg into a current global lead.

The chart visualises how the centre of the crisis has lurched from Asia to the West with extraordinary speed, with China once in a runaway lead but now not even represented in the top 20 of per-capita cases.

It also highlights small countries where the outbreak has been particularly bad when adjusted for population.

The current world leader in that respect is Luxembourg, where an outbreak of 2,500 cases has attracted little attention but where one in 240 people have been infected in a country of only 600,000 people.

Spain is second followed by Switzerland, which borders Italy and where 19,000 cases are an alarming number among only 8.5million people.

The animation was shared by physicist Robert Rohde of Berkeley Earth, a research institute based in California. 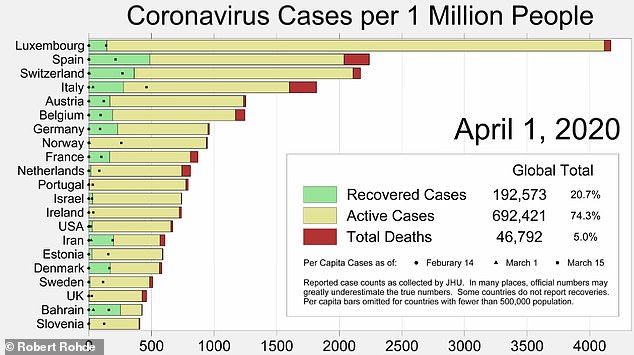 This graph shows the number of coronavirus cases per million people, putting Luxembourg into a clear global lead because of its small population

The virus first emerged in mainland China, and mostly remained there in the first few weeks after it was discovered.

As recently as February 21 – six weeks ago – China still accounted for 98 per cent of global coronavirus cases, according to the World Health Organisation.

China was the clear leader in the per-head table for weeks, despite its vast population which means that even 70,000 cases are only one in every 20,000 people.

By late February, smaller South Korea had overtaken China in the per-capita table, after the Asian country became one of a handful of key hotspots along with northern Italy and Iran.

Two Asian countries with small but dense populations – Bahrain and Singapore – also appeared near the top of the list in that period. 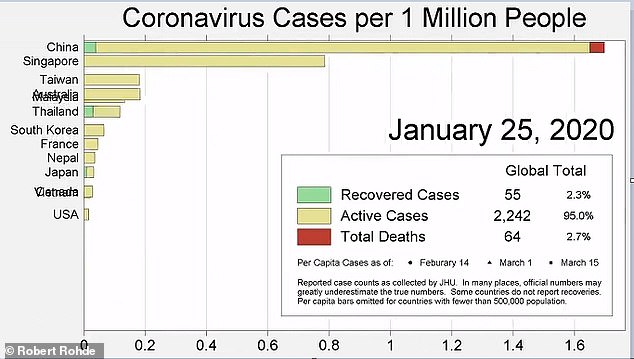 January 25: Only a few countries had recorded coronavirus cases by this point, and China was the clear leader per capita despite its vast population 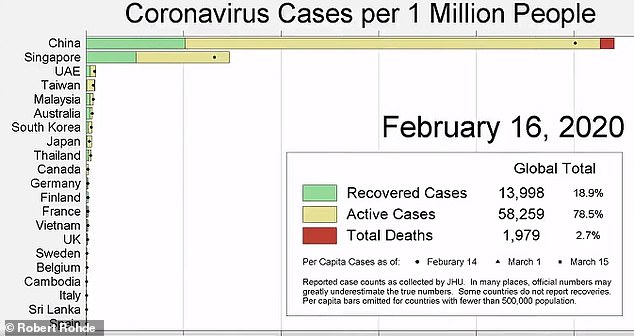 February 16: China’s unwanted lead was enormous at this point after cases piled up in mainland China early that month and were still only trickling in elsewhere

Italy overtook China in the per-capita table in early March, after it became the first European country to be ravaged by a virus outbreak.

The population of Italy (60million) is 23 times smaller than China’s, meaning even a few thousand cases in the Mediterranean country were enough to put Italy ahead.

China went plummeting down the table during a dramatic week in mid-March in which a worrying outbreak in Europe became a full-blown crisis on the continent.

By March 15, although China still had a narrow majority of world cases at that date, many European nations including Germany, France, Sweden and Denmark were racking up more cases per head than mainland China.

Within days, China had disappeared from the top 20 in the per-capita list altogether, as its official numbers slowed to a trickle – although these have attracted doubts.

As the pathogen spread across Europe, Luxembourg moved into an unwanted global lead. 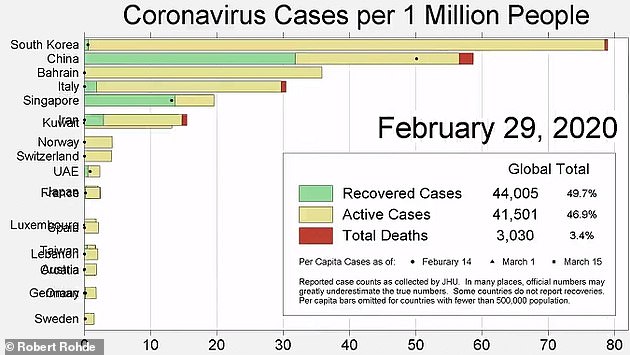 February 29: South Korea had overtaken China by this point while Italy was fourth, and the densely-populated countries of Singapore and Bahrain were high in the table 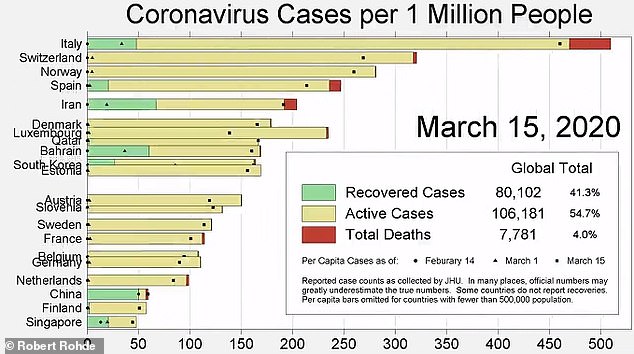 March 15: Italy had moved into the lead by this point after the country was ravaged by the virus epidemic, with neighbouring and lower-population Switzerland in second

For comparison, such a rate would mean around 250,000 positive cases in the UK, or more than 1.3million in the United States.

Similarly, Switzerland’s 19,000 cases have attracted less attention than the more alarming numbers in Italy and Spain among others.

However, as the graph demonstrates, the number of cases per head has often been higher in the Alpine country.

The United States, which has a population far larger than any European country, has a lower infection rate per head than countries such as Italy or Germany.

Nonetheless, the U.S. has climbed into the top 20 in recent days, ahead of Iran which was once one of the major epicentres of the crisis.

As of April 1, the list is mainly a European one, reflecting how the continent has become the major breeding ground for the pandemic.

Israel, the United States, Iran and Bahrain were the only non-European countries in the top 20 on the first of this month.

That means there is no East Asian country high on the list, despite the virus’s origin in China and early outbreak in South Korea.