At the China International Import expo in Shanghai last month, the Argentinian Beef Association was ready to pounce on Australia's misfortune.

Argentina has maintained strong diplomatic relations with China since the beginning of the coronavirus pandemic. Beijing sent tonnes of medical equipment to Argentina as COVID-19 began sweeping through Latin America. Even though they all had to endure 14-day quarantine to attend, 58 representatives of the beef association were in the hall to show off its sirloin and rib eye. 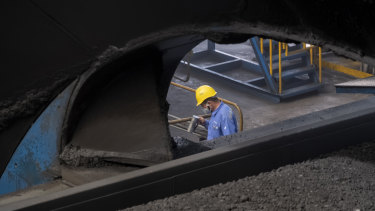 A worker monitors the coal dumping process at the Caofeidian Port in Hebei Province. Credit:Sanghee Liu

Australia is not unique. At least 60 countries that count China as their number one export market.

Argentina is one of the hungriest, but also lining up: Russia, Indonesia, South Korea and Brazil. And all of them want a cut of Australia's lunch.

After years of galloping trade balances buttressed by iron ore and supported by farmers, fishers and loggers, Australia now faces a reckoning.

Its trade with China has been hammered by a year of diplomatic disputes characterised by economic threats from Beijing aimed at making Australia change course on national security, foreign affairs and human rights policies.

As Australia is forced to find new customers, others are ready to fill the void in the world's largest market.

Australian beef was first to be hit. Back on May 5, less than three weeks after Australia called for an independent inquiry into the coronavirus, China restricted imports from four of Australia's largest abattoirs citing vague labelling infringements. By December, another two would follow, severely limiting the $1.7 billion a year export trade.

The head of Argentina's meat export consortium, Mario Ravettino, said in October that COVID-19 had minimal impact on China’s demand for Argentinian beef.

In September, Australian beef exports to China were down 64 per cent compared to the same time last year, according to figures from the Department of Agriculture.

Barley was next. The grain used to make China’s Tsingtao beer was stung with an 80.5 per cent anti-dumping tariff on May 19. It was the same day that a motion first suggested by Australia to establish an independent review of the coronavirus passed the World Health Assembly.

China’s General Administration of Customs had been working on a proposal to allow Russian barley into the country following the fallout from the US-China trade war in 2019, which would also take in wheat and soybean imports.

Russia was approved in August. It now plans to ramp up its agricultural exports to China ten-fold, from a pre-deal low of $960 million a year to $9.6 billion.

Australian barley exports to China fell by 99 per cent in June. Within two months, Australia's wine producers were notified they were the subject of an anti-dumping investigation.

Australian wine is highly valued in China, coming second only to drops from France in terms of popularity if not sales. Treasury Wine's signature label, Penfolds, has the sixth highest name recognition in China, according to Hong Kong market research firm CLSA, which surveyed residents of 244 cities in September. 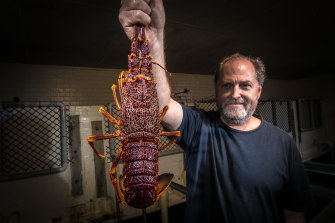 Australia exports 94 per cent of its lobster catch to China, making it largely unviable for fisherman in Victoria and WA to keep fishing. Many have left the water.

North America and Indonesia are Australia’s largest competitors in the insatiable Chinese lobster market, which soared by 51 per cent between January and May according to Supermarket chain Metro China.

But their exports are also vulnerable to claims of diplomatic and economic coercion. Canada found that out in June when its lobster were also subject to enhanced screening measures for the coronavirus. The screening stopped some of its exporters' access to the market as diplomatic tensions rose between Ottawa and Beijing over the treatment of two Canadians detained in China, Michael Spavor and Michael Kovrig, on unspecified nationals security charges.

Perversely, despite the multiple trade strikes on more than half-a-dozen industries this year, Australia’s trade balance with China is actually expected to rise because of one $80 billion a year factor – iron ore. The resource, which is used to make steel, is critical for China's infrastructure boom.

Brazil, for all of its efforts to compete with Australia on iron ore shipments, has been unable to match the world’s largest supplier because of COVID-19 and two major mining flood disasters that have hampered its largest exporter Vale.

The supply constraints have seen the value of iron ore go up by more than 55 per cent to $US142 a tonne this year. That surge has been very good for the Australian federal budget adding $2.5 billion in tax revenue for every $US10 increase. 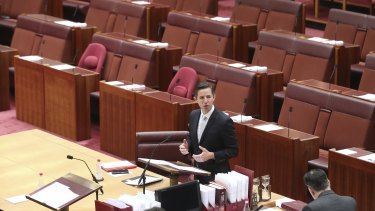 But the extra tax revenue is cold comfort for the hundreds of smaller businesses and large exporters who are now being told by the federal government that they have to diversify their markets.

In his last appearance in the Senate as Trade Minister before a cabinet reshuffle next week, Simon Birmingham said that Australia would be staying the course as the government attempts to help businesses transition. He noted on Wednesday that Australia was not unique, but was one of dozens of countries who had helped accelerate China’s rise through trade. It had now had no intention of trading away its values.

“We make no secret this competition is creating new dilemmas for us and for the rest of the global community,” he said. “Australia has been consistent about our principles and protecting our national interest.”

As Birmingham was speaking, Australia’s ambassador to China, Graham Fletcher, was preparing to meet with one of the Morrison government’s loudest and fiercest critics, Hu Xijin, the editor-in-chief of China’s international state media outlet, The Global Times.

The nationalist paper has been a key force driving the campaign for tougher action from Beijing on a recalcitrant Australia.

Over lunch, the pair agreed on little. Hu finished his account with a warning, if Australia does not change its stance: “China-Australia relations will hardly pick up, and Australia will continue to pay for its unreasonable China policy”.