Few things make our hearts (and tummies) sing quite like cheese. While it’s a great source of calcium and protein, certain types can be super high in saturated fat, sodium and cholesterol. The American Heart Association recommends that adults have two to three servings a day of fat-free or low-fat dairy products (ideally those with no more than 3 grams of fat and 2 grams of saturated fat per ounce). So, which cheeses make the cut? Here are nine options to look for when shopping for the healthiest cheese.

RELATED: Ina Garten Shared a New Mac and Cheese Recipe and It Was So Popular, It Actually Crashed Her Website 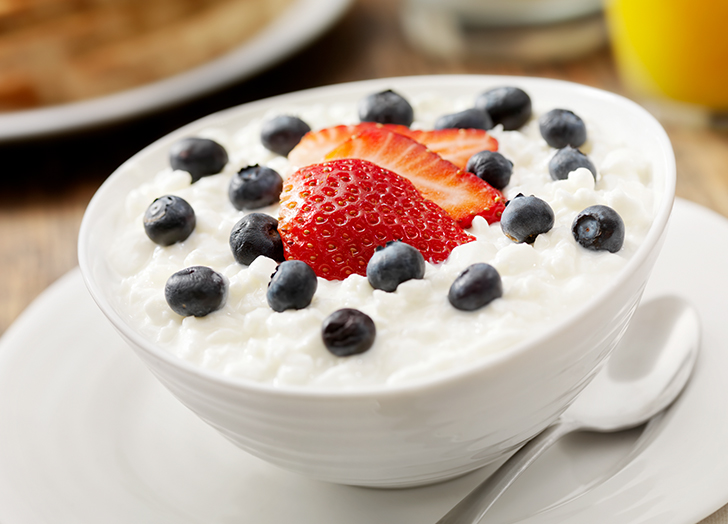 Don’t knock it, this is a quintessential healthy snack for a reason. A half-cup serving of cottage cheese boasts 13 grams of protein, 5 grams of fat (only 2 of which are saturated) and 9 percent of your daily calcium. And you can opt for fat-free cottage cheese, if you want to save an extra 30 calories per serving. The only downside? Both kinds are high in sodium, containing 17 percent of your daily intake. But compared to some other cheeses, that’s totally manageable, especially if you work it into an otherwise healthy diet. Try cottage cheese on toast, with fresh fruit or mixed in oatmeal.

Use it:Sourdough with Whipped Cottage Cheese and Raspberry Chia Jam 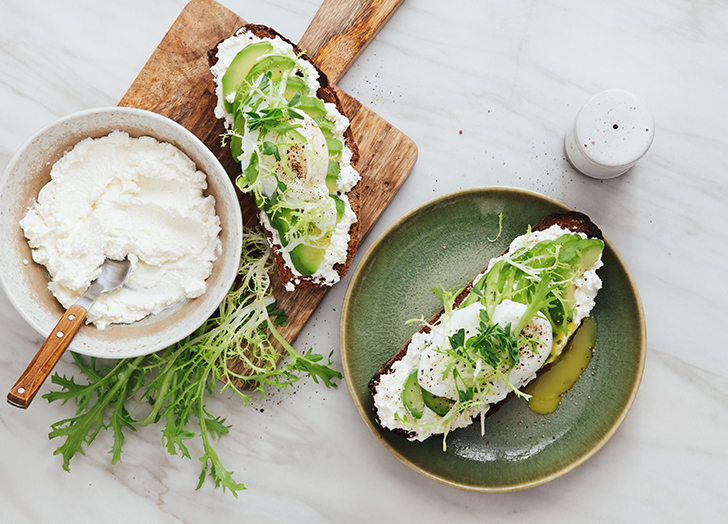 A solid rule of thumb is to steer clear of items labeled “cheese products,” which are processed with artificial ingredients and hydrogenated oils. Natural cheeses, like ricotta, are free of these added fats. Whole-milk ricotta will cost you about 215 calories per half-cup, as well as 16 grams of fat (10 of which are saturated), 14 grams of protein and more than a quarter of your daily recommended calcium. So, if you’re shopping with health in mind, go for part-skim ricotta; it’ll save you 6 grams of total fat and about 45 calories. Skim ricotta has an even higher calcium count and can hook you up with 34 percent of the recommended daily amount—in a single serving. Plus, ricotta is versatile enough to dress up crostini, fried eggs or salad, but nothing beats a ricotta-kissed pasta dish.

Use it: Salami, Artichoke and Ricotta Pasta Salad 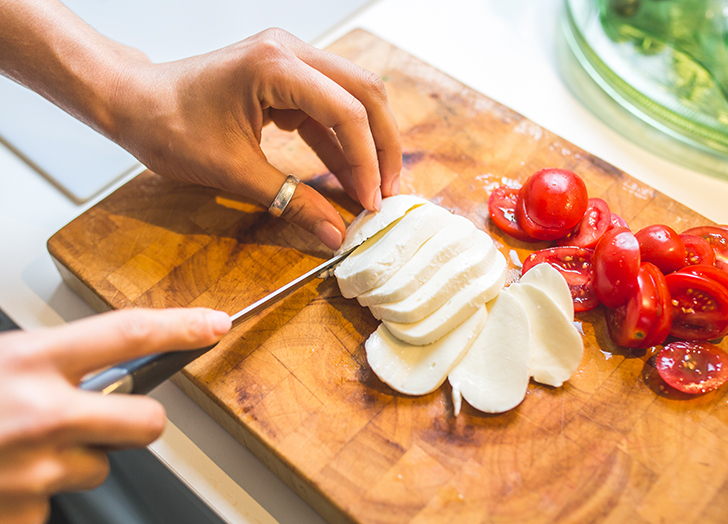 Fresh cheese tends to be lower in sodium since it doesn’t require as much aging as hard cheese. An ounce of fresh mozzarella (the wet kind you usually see in slices or balls at the grocery store) only contains 84 calories, 6 grams of fat, 4 grams of saturated fat and 6 grams of protein. It’s not super high in calcium, at 14 percent of your daily recommended intake, but its lean qualities make up for that. (P.S., blue cheese is among the most calcium-rich of all cheeses, but it’s also higher in calories and fat.) A quarter-cup serving of shredded mozzarella has just about the same numbers as fresh, but you can save yourself some fat and calories by shopping for part-skim or reduced-fat mozzarella.

Use it: Pan Con Tomate and Mozzarella Bake 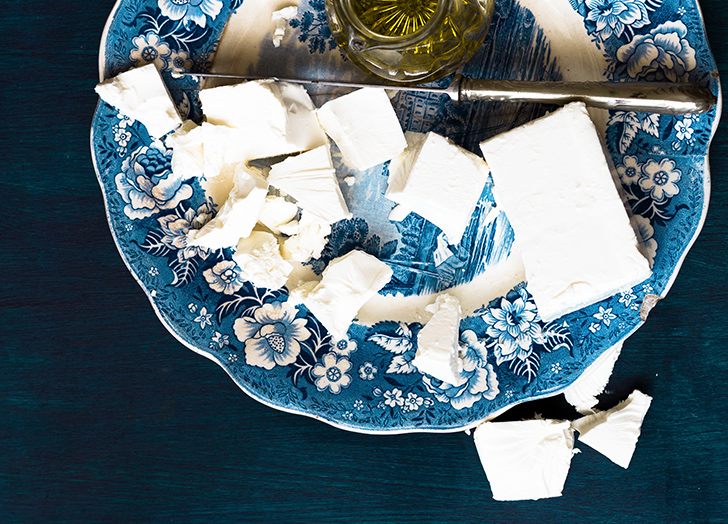 The Mediterranean Diet wouldn’t be complete without a few crumbles of Greece’s most famous cheese. Traditionally, feta is a brined curd cheese (that’s why it’s so salty and savory) made from sheep’s milk but you can also find goat or cow milk variations at the supermarket. It’s super low-calorie, compared to some other cheeses at 75 calories per ounce. However, it’s lower in protein than mozz with 4 grams per serving, but equivalent in terms of fat and calcium. We love feta over salad, on a charcuterie board next to some olives or on a juicy grilled burger.

Use it: Baked Feta with Dill, Caper Berries and Citrus 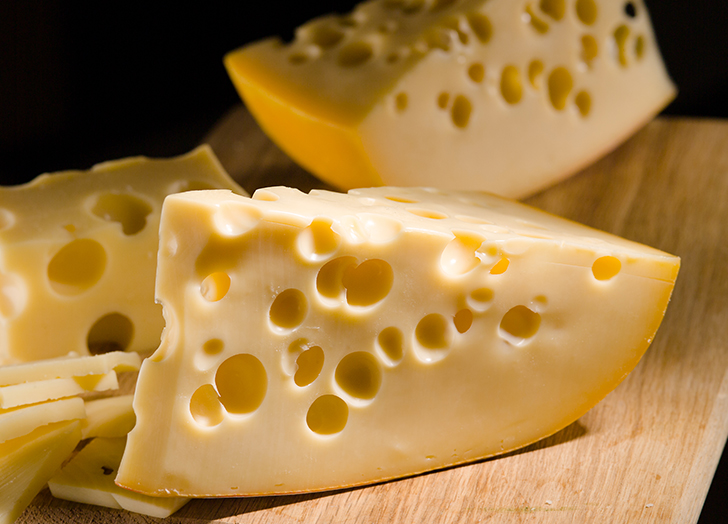 It’s your deli sandwich’s best friend and an ooey-gooey option for fondue. This mild cheese made from cow’s milk is nutty and vaguely sweet. Obviously Swiss is famous for its signature holes (eyes, if you’re fancy), which are the result of carbon dioxide being released during the maturation process. Because it’s a hard cheese, it’s a bit higher in fat and protein than the fresh cheeses on our list: In a single-ounce serving, Swiss clocks in at 108 calories, 8 grams of fat (5 saturated), 8 grams of protein and 22 percent of your daily calcium. Your teeth and bones will thank you.

Use it: Gruyère and Swiss Fondue 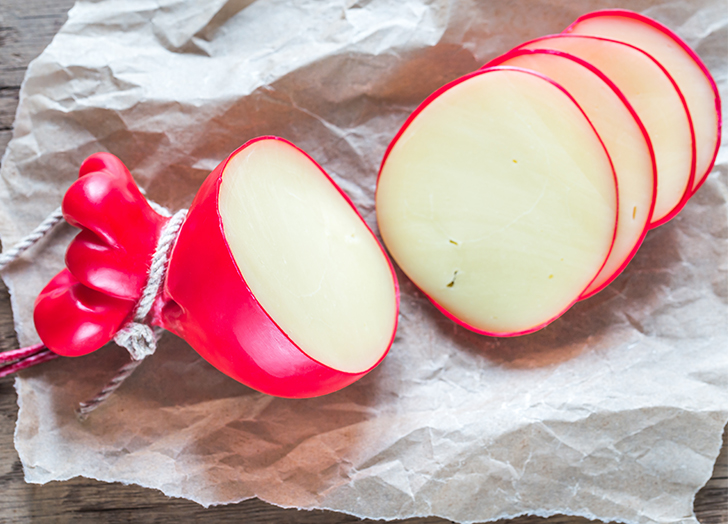 This Italian pick is a pulled-curd cheese made with full-fat cow’s milk, though you can probably find a light provolone at your local grocer. Nutritionally, it’s very similar to Swiss but with one less gram of protein per ounce and about 10 fewer calories. It’s prime for topping pizza and is a great filler for sandwiches, wraps and antipasto platters. Provolone is aged for at least four months before it hits shelves, so it’s packed with more salt than many fresh and soft cheeses. One ounce has 10 percent of your daily sodium (whereas Swiss only has 1).

Use it: Cheater’s White Pizza with Béchamel Sauce 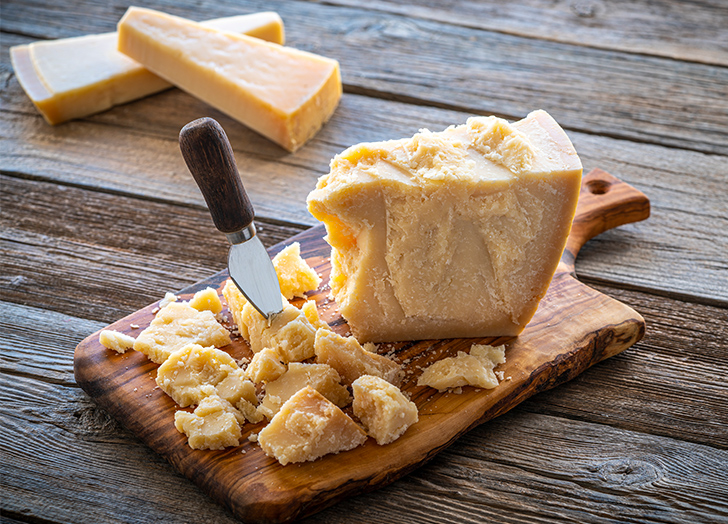 Whether you nibble an ounce of block parmesan as a snack or a sprinkle a quarter-cup of grated over veggies, you truly can’t go wrong. This salty topper is basically required for every pasta dish, pizza and Caesar salad, and complements acidic or rich sauces beautifully with a punch of salt and tang. A hard cow’s milk cheese, parmesan has notably more salt than our other picks at 16 percent of your daily sodium per serving, as well as 7 grams of fat. On the plus side, it has 10 grams of protein and only 112 calories per ounce. So, as long as you stick to the recommended amount (and only occasionally go ham), there’s no need to sweat it.

Use it: Zucchini Salad with Lemon and Parmesan 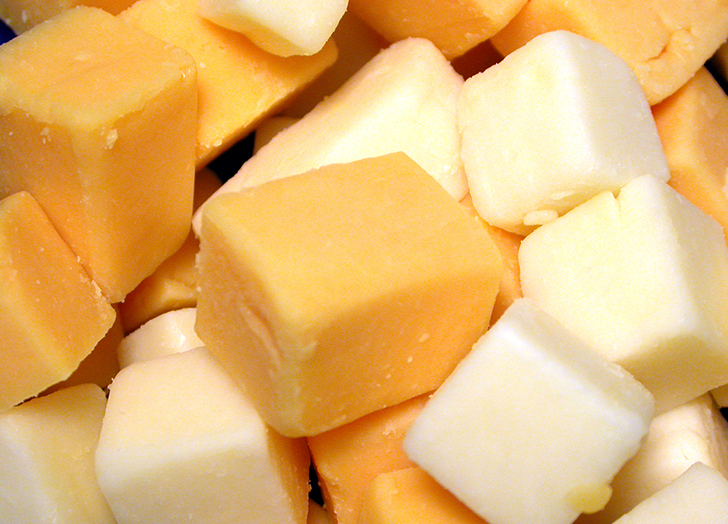 Reduced-fat cheeses, also labeled as light or low-fat, are made with part-skim milk, which saves you in the fat and calorie departments. They’re a nice way to get your cheese fix without totally throwing your usual diet out the window—as long as there are no weird ingredients, oils or extra salt added, notes Cleveland Clinic. In short, cheddar is bae. But the regular kind is pretty high in fat (we’re talking 27 percent of your daily saturated fat and 10 total grams of fat per serving). Go for the light version instead and you’re looking at 88 calories, 6 grams of fat, 8 grams of protein and 22 percent of your daily calcium per one-ounce piece. Cheddar is amazing on eggs, burgers and pretty much every sandwich on earth—but it’s career highlight in our book is when it makes a melty appearance in macaroni and cheese.

Use it: One-Pot Mac and Cheese 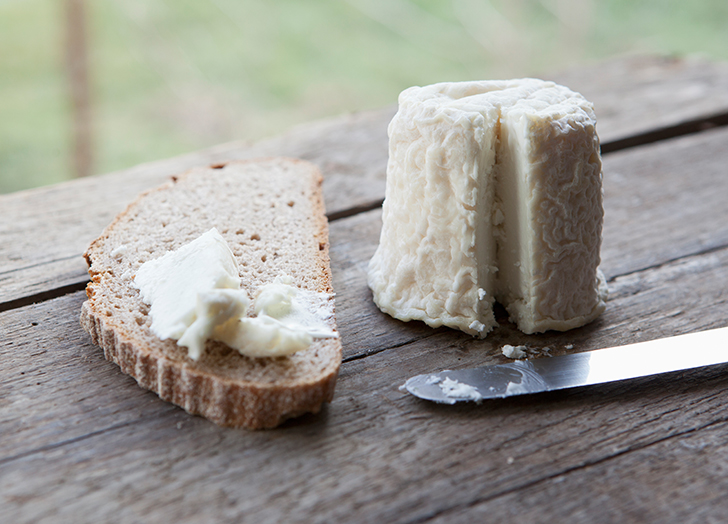 Did you know some people have an easier time digesting goat milk than cow’s? That’s because it’s lower in lactose. This salty, beyond-tangy number does so much more than top salad (though nothing pairs with dried cranberries, pecans, spinach and a maple vinaigrette better than this guy). Creamy pastas are a no-brainer, as are burgers and jam-slathered bread. You can also bake or fry medallions or balls of goat cheese, if you’re craving some comfort food. It’s calorically on-par with feta plus an extra gram of protein per ounce (5 grams total). It can hold its own with the rest of our picks, thanks to a modest 6 grams of total fat and a low sodium percentage. The only con: Goat cheese doesn’t have as much calcium as other cheeses, only providing you with about 4 to 8 percent of what you should consume in a day.

Use it: Goat Cheese Pasta with Spinach and Artichokes

RELATED: We Have a Very Important Question: Can You Freeze Cheese?