‘This is inhumane!’ Heathrow chaos continues for ANOTHER day as furious passengers arriving at Terminal 3 say they are waiting in ‘horrific’ queues and being forced to stand for HOURS

Furious Heathrow arrivals are complaining of yet more queues today, less than 24 hours after Home Office chiefs branded the border wait-time chaos at the airport as ‘unacceptable’.

Passengers arriving at the London airport this morning say they are facing ‘horrific’ queues to get through to the border area of Terminal 3.

One person posted a picture on Twitter from the arrivals area today showing a line of people packed into a hallway.  The picture shows a sign urging passengers to ‘have your passports ready’.

Another wrote: ‘Still horrific queues at Heathrow’s T3 this morning. It’s inhumane to force the disabled and children especially to stand for hours! Where’s the promised improvement?’.

It comes as The Home Office finally admitted yesterday that massive queues at the airport’s Terminal 5, where people including a pregnant woman fainted on Friday night, were ‘unacceptable’. 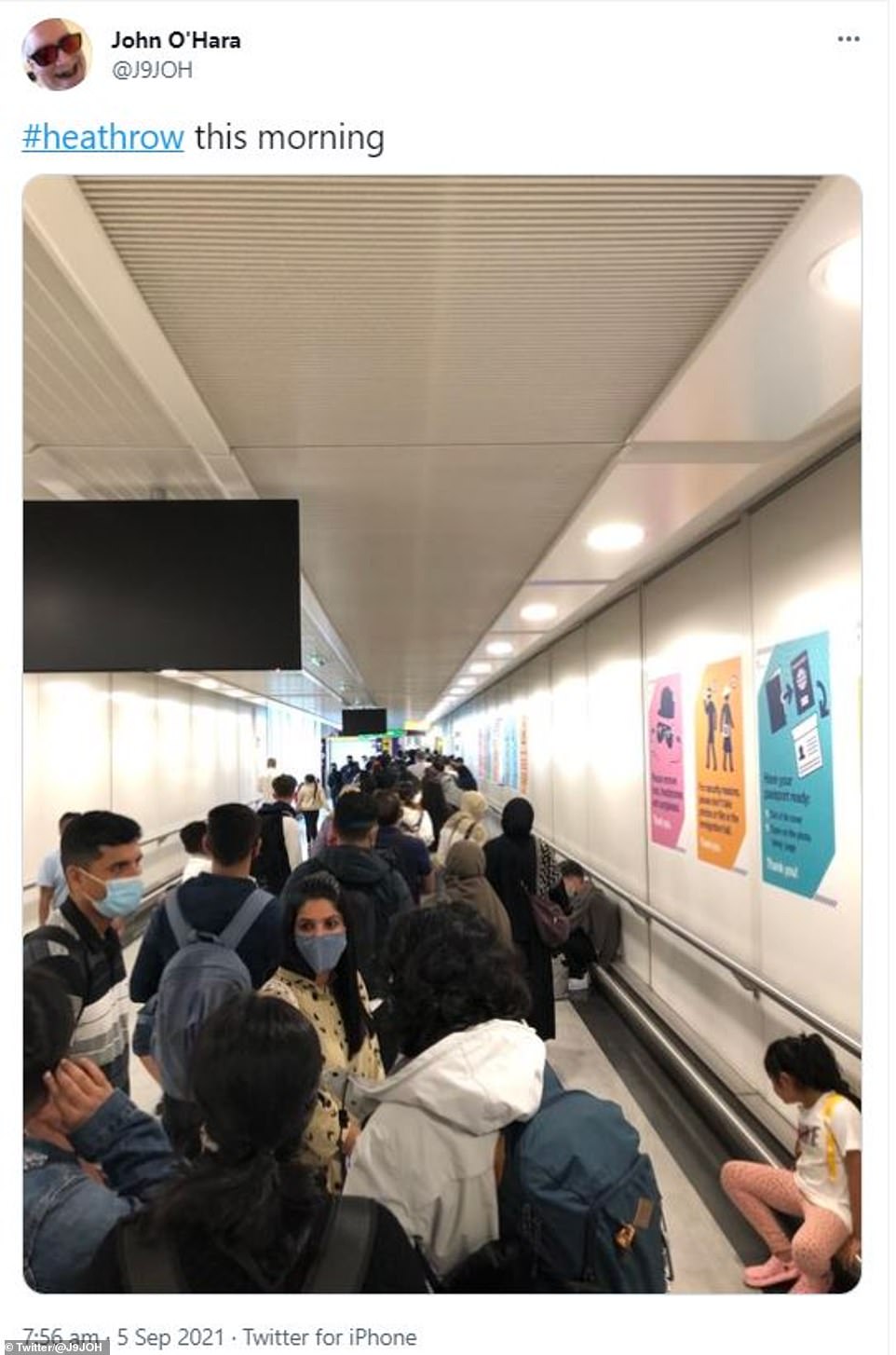 Furious Heathrow arrivals are complaining of yet more queues at the Heathrow today, less than 24 hours after Home Office chiefs branded the wait-time chaos at the airport as ‘unacceptable’. Pictured: One Twitter user, John O’Hara, posted this image on Twitter today 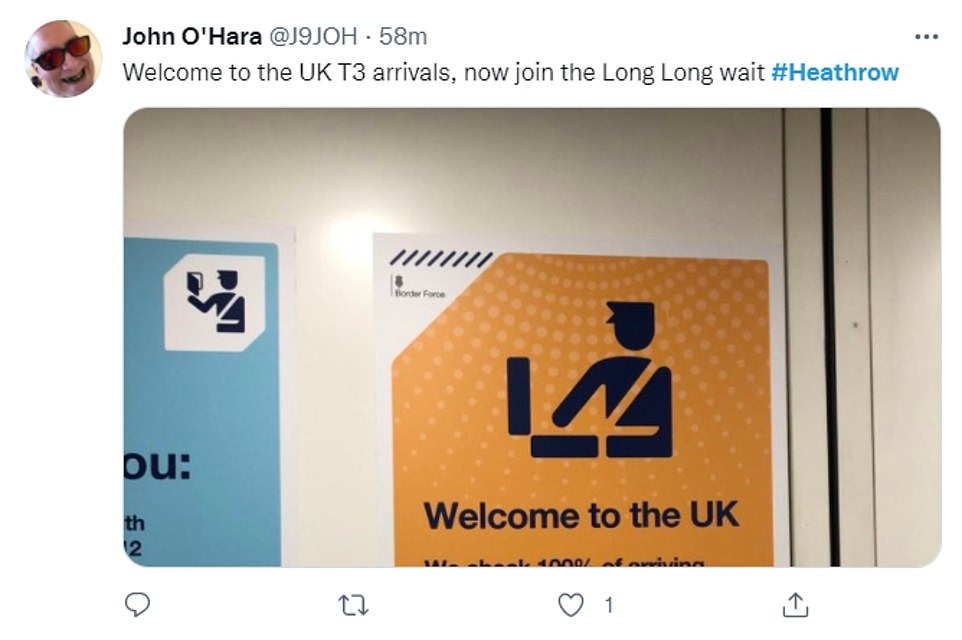 In another image posted on Twitter, he said he was preparing to join the ‘long long wait’ at the Heathrow Terminal 3 border

Another wrote: ‘Still horrific queues at Heathrow’s T3 this morning. It’s inhumane to force the disabled and children especially to stand for hours! Where’s the promised improvement?’

The strongly-worded statement came after a furious blame-game broke out yesterday over the queueing chaos at the airport.

It followed the posting of pictures on social media showing thousands of British arrivals being forced to cram into small hallways with no social distancing measures in place and queueing for several hours to pass immigration.

One holidaymaker, Sonny Singh, told Sky News he saw a pregnant woman pass out while in the queue on Friday night.

‘There were thousands of families queuing and just two people in booths up front checking documents,’ he claimed.

‘Children were screaming and crying. The queue moved about five feet in the space of about 45 minutes.

‘Then, when the pregnant woman fainted, it finally got through to someone somewhere – the kids were then put on the side to sit while the adults waited in the queue and it began moving faster.’

One photo even appears to show a male traveller lying on the floor in the London airport after apparently passing out while queueing for passport control, amid claims that stressed holidaymakers had no access to ventilation or toilets, and no shuttles were available. 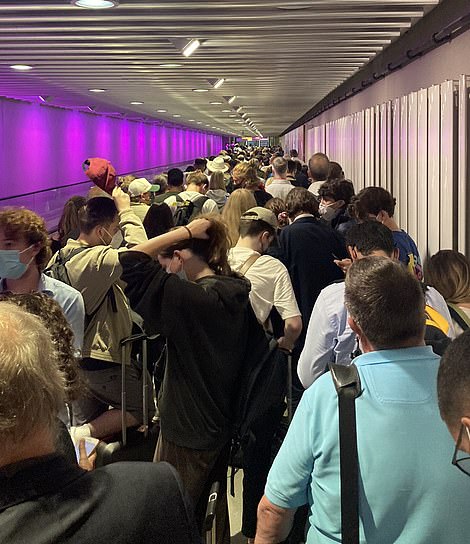 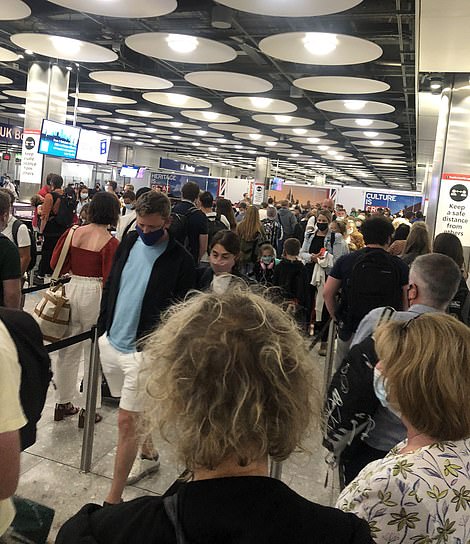 The queueing chaos at Heathrow airport continued overnight, with incensed British holidaymakers complained of the risk of spreading Covid as hundreds of passengers were rammed into small hallways and forced to queue for up to five hours 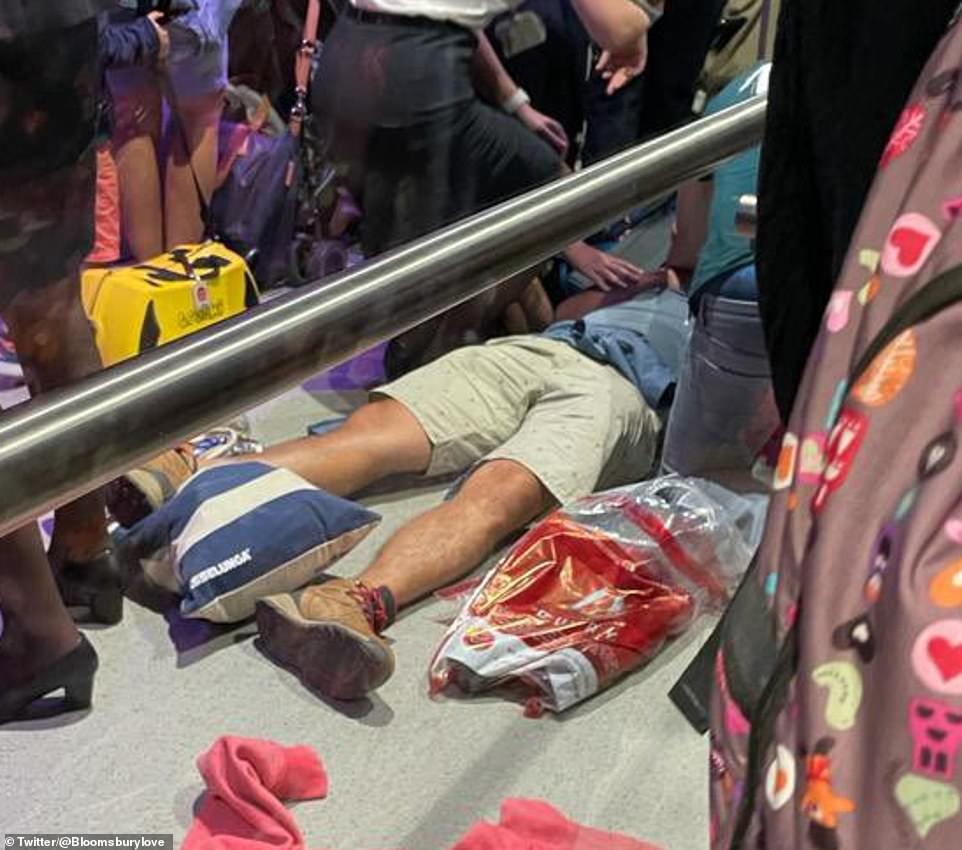 An incensed passenger queueing for hours to get to immigration at Heathrow tweeted on Friday night: ‘Kids crying and screaming and fully grown [men] fainting whilst two people at the booth serving thousands of people queuing up to the runway.’

Astonishingly, Heathrow has twice admitted that they have no idea how long it will take passengers to pass through immigration.

The border chaos has been compounded by the fact that families with children aged under 12 can’t use the e-gates.

In a statement, a Heathrow spokeswoman blamed ‘unacceptable queueing times in immigration’ on ‘too few Border Force officers on duty’.

She claimed the Home Office ‘were aware of the extra demand’ and said they are ‘disappointed’ they didn’t provide ‘sufficient resource’. 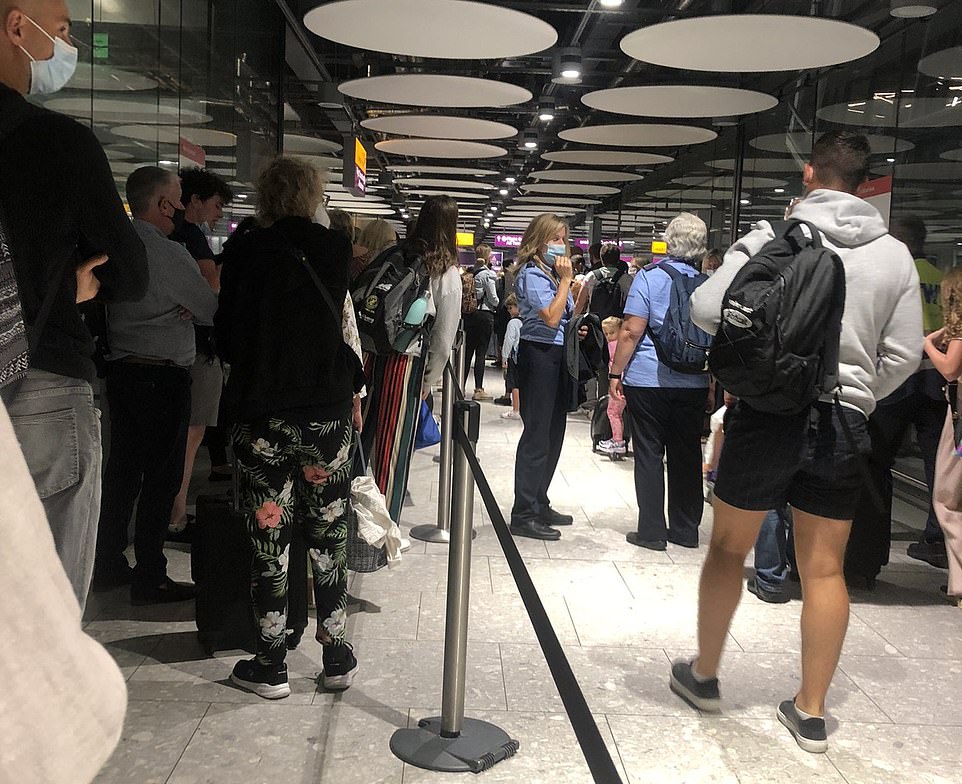 Images on Twitter show huge lines of people packed together tightly – apparently without access to water, ventilation or toilets – while they queued for several hours to pass through immigration on yet another day of mayhem at Terminal 5 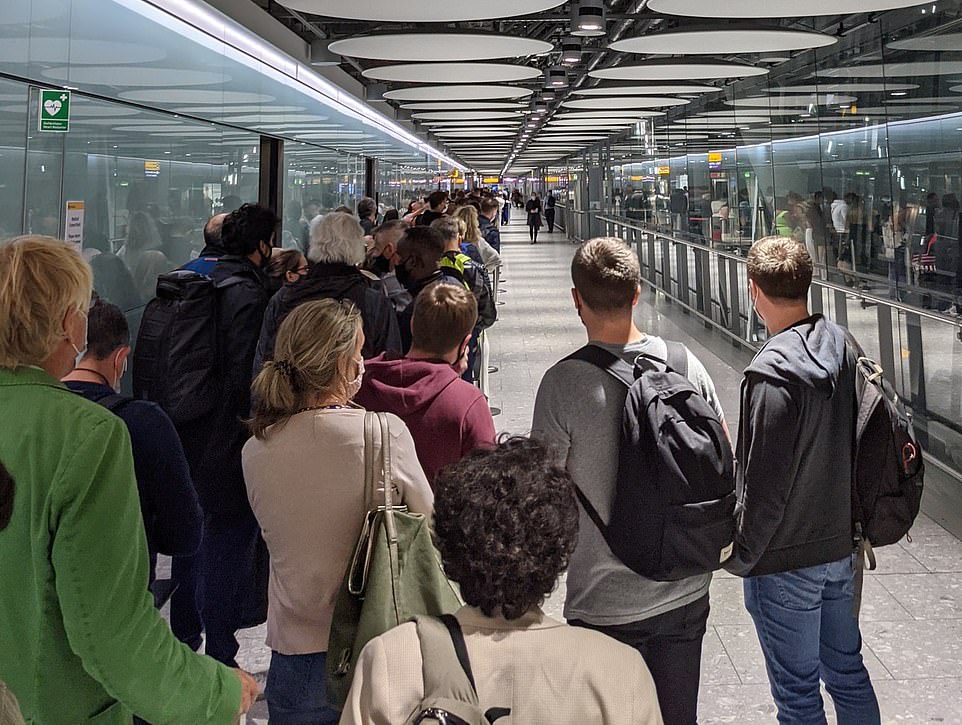 It has been claimed that a male holidaymaker fainted while standing in line for passport control while pregnant women, pensioners and young children were made to walk long distances with no shuttles available and no social distancing possible

Astonishingly, Heathrow yesterday admitted that they have no idea how long it will take passengers to pass through immigration. The chaos has been compounded by the fact families with children aged under 12 can’t use the e-gates

‘We have additional Heathrow colleagues to support in managing queues and to hand out passenger welfare including water, but we need every immigration desk to be staffed at peak times.

‘We have escalated this with Border Force and expect them to provide a better service over the remainder of the weekend,’ the spokeswoman added.

A Home Office spokesman admitted yesterday: ‘Throughout the pandemic we have been clear that queue times may be longer as we ensure all passengers are compliant with the health measures put in place to keep the UK public safe.

‘However, the very long wait times we saw at Heathrow (on Friday night) are unacceptable.

‘This is the busiest weekend of the year for returning passengers, with particularly high numbers of families with children under the age of 12 who cannot use e-gates.

‘Border Force is rapidly reviewing its rosters and capacity and flexibly deploying our staff across the airport to improve waiting times.

‘We are working very closely with Heathrow Airport and its airlines and we are all committed to making sure all passengers can have a safe and hassle-free journey.’

Asked about the queuing situation at Heathrow today, a spokesperson for the airport told MailOnline today that any request for comment would have to go to the Home Office who operate the border through the Border Force.