‘The doors of hell are opening up…close everything!’ Social media is flooded with hysterical memes amid warnings of 40C ‘Death Valley’ heatwave next week

Social media users have shared their exasperation at predicted temperatures next week which could hit record-breaking heights.

Britain is set to endure its hottest day on record next week with unprecedented 40C (104F) highs on Tuesday, forecasters said today as schools offered children the day off and rail passengers were warned of travel chaos.

The Met Office has warned of ‘widespread impacts on people and infrastructure’ from Sunday to Tuesday.

Social media users were quick to share their reactions on Twitter with many suggesting they may not head into work during the height of the heatwave. 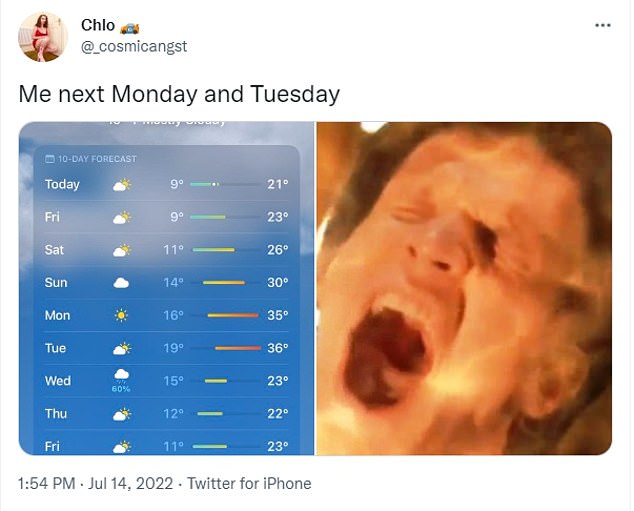 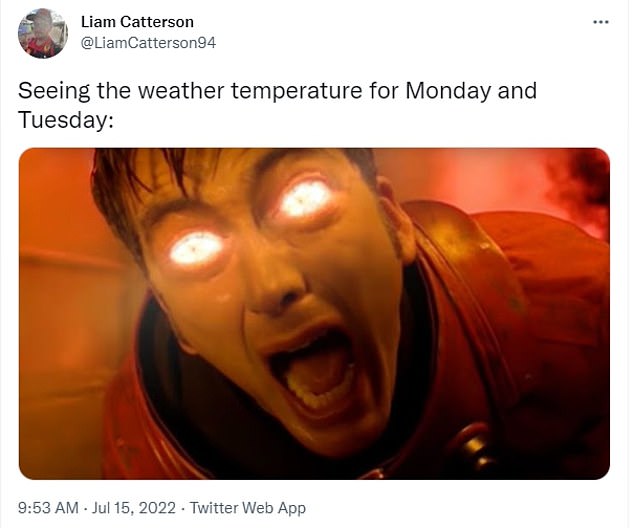 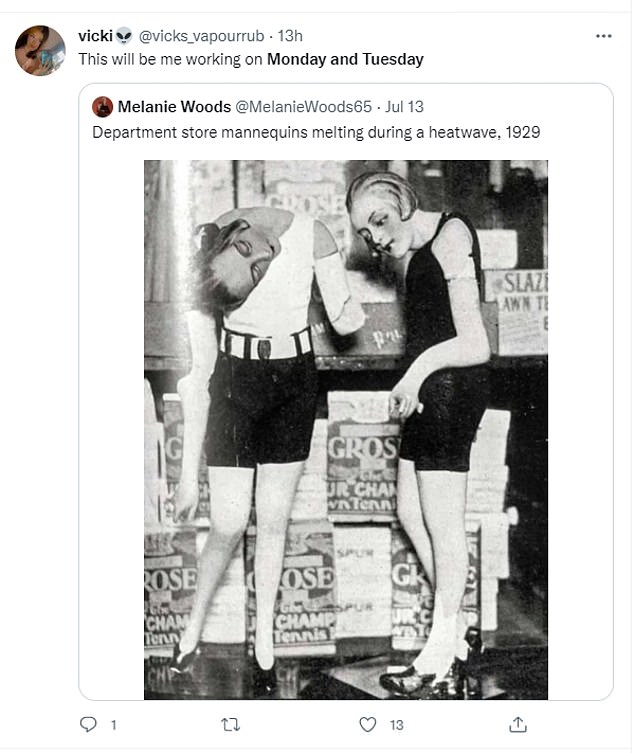 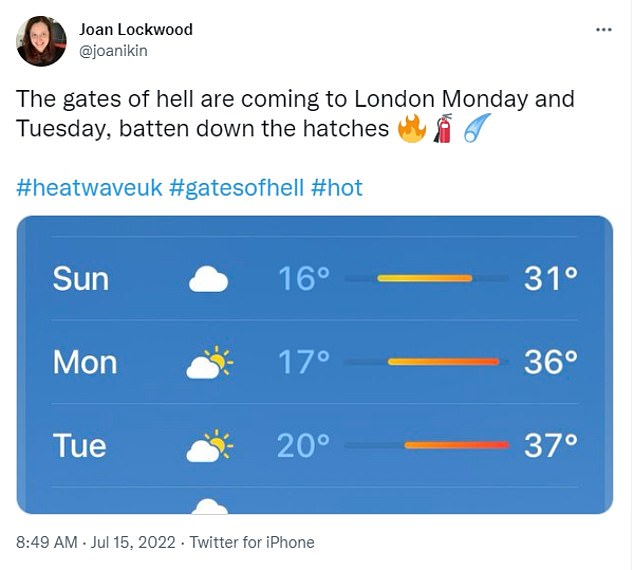 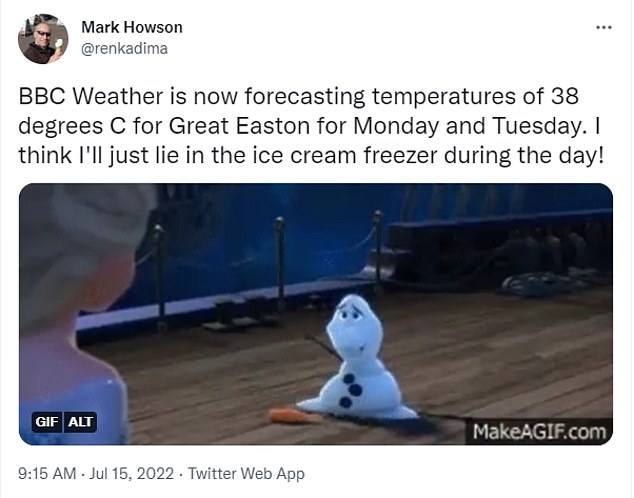 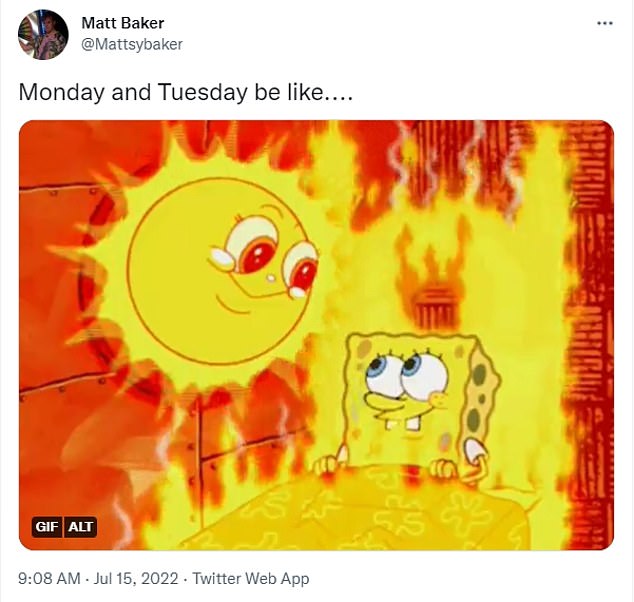 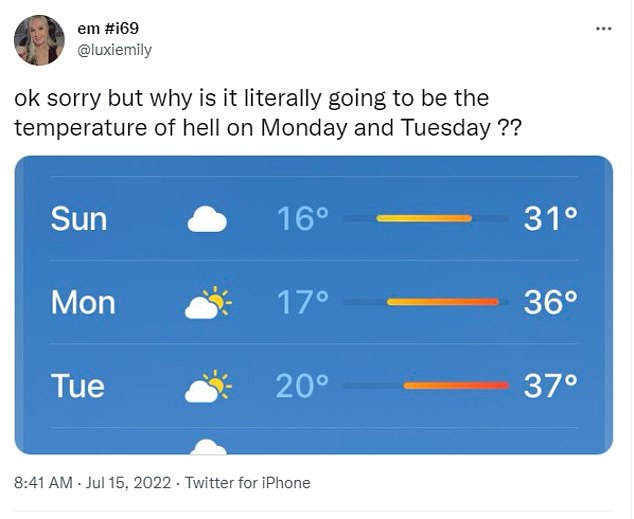 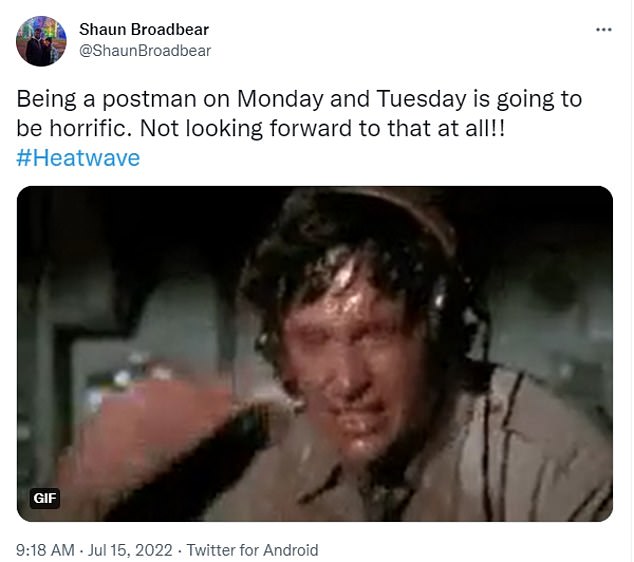 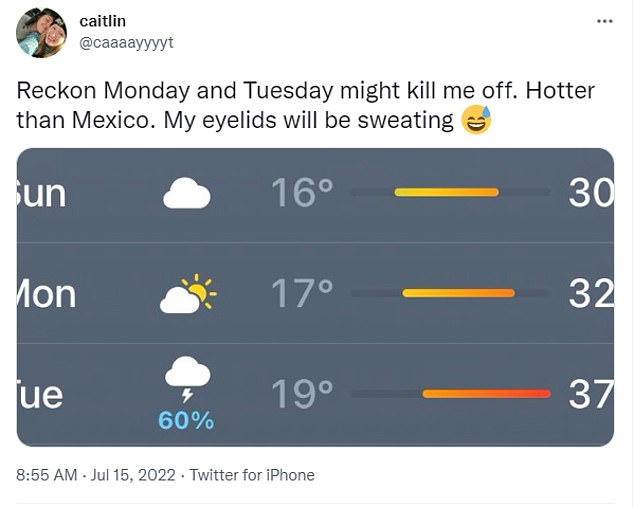 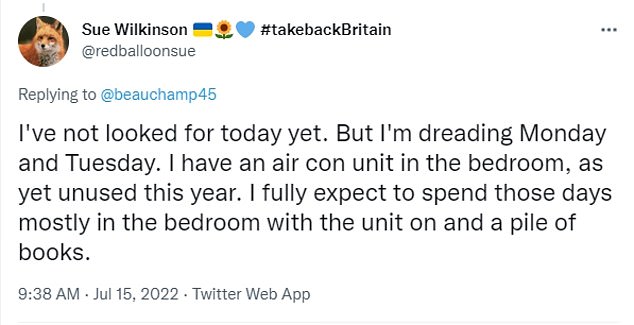 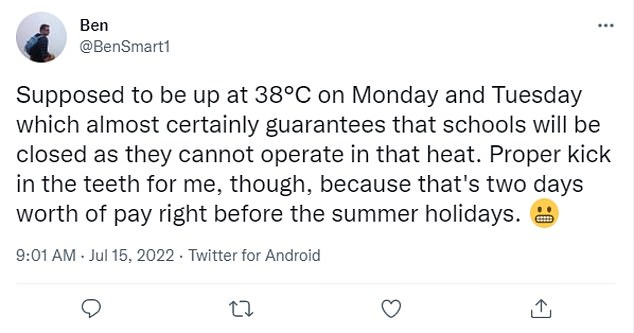 One user wrote: ‘Supposed to be up at 38C on Monday and Tuesday which almost certainly guarantees that schools will be closed as they cannot operate in that heat.

‘Proper kick in the teeth for me, though, because that’s two days worth of pay right before the summer holidays.’

Another added: ‘Tbh I think we should all be given the day off work on Monday and Tuesday – that heat’s going to be awful.’

A third wrote: ‘The gates of hell are coming to London Monday Tuesday, batten down the hatches.’

It comes as schools are preparing to send pupils home early, scrapping PE lessons and banning children from playing outside in a series of measures being considered as the country braces for the record-breaking heat.

Students at three primary schools in Herefordshire have already been told they will not be allowed to play outside after the Met Office issued a 72-hour amber warning for ‘extreme heat’ posing ‘a danger to life’ from Sunday. Schools are also encouraging pupils to wear a T-shirt and shorts instead of normal clothes to help them stay cool. 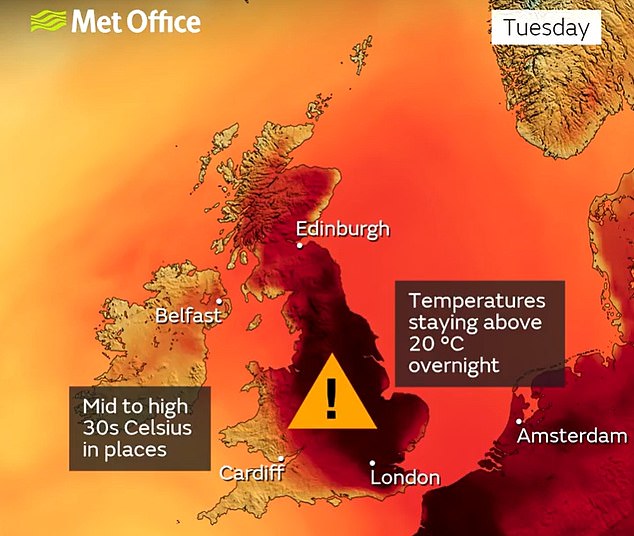 The Hereford Academy announced an earlier start and finish to the school day, while parents at Marlbrook, Little Dewchurch and St Martin’s primary schools were told PE lessons will be scrapped and pupils will not be allowed outside to play. A letter added: ‘We are also giving parents the option to keep children at home on Monday.’

Meanwhile Crestwood Community School in Eastleigh, Hampshire, is among the schools to cancel sports day, saying that ‘we do not feel that it is safe for students to be out in the heat all day, taking part in physical activity.’

In East London, the headteacher of Clapton Girls’ Academy warned of an early finish amid fears school facilities will be unable to cope with the heat. Anna Feltham told parents: ‘Already, many classrooms are very hot, even with fans, and students are struggling to keep cool, drink enough water and maintain concentration in lessons.

‘Next week’s heatwave will make many teaching rooms unbearably hot by lesson two and five. We have reviewed a number of options but do not have sufficient ‘cool’ rooms to re-room lessons into.’

And Red Hall Primary School in Darlington has banned children from playing outside in the scorching heat unless they wear a hat, saying it was a ‘real concern’ that many pupils were attending school without one this week.

Health chiefs fear the NHS will be overwhelmed by a number of heat-related casualties if the mercury does indeed rise to levels only usually seen at Death Valley in California, which is the world’s hottest place.

The Met Office warning from Sunday to Tuesday – which was issued earlier this week – said the weather could cause health problems across the population, not just among people vulnerable to extreme heat, leading to potentially serious illness or danger to life.