Now the Government starts to wind down the daily Covid figures: Health officials will no longer update stats dashboard at weekend in another part of Boris’s ‘living with Covid’ plan

Britain’s Covid data dashboard will no longer be updated at weekends under Boris Johnson’s strategy to live with the coronavirus like flu.

Instead, numbers logged on Saturday and Sunday will all be lumped together in one artificially-higher figure on Monday. Daily figures will not be separated out.

The dashboard, hailed as one of the best in the world, has been updated seven days a week throughout the pandemic, allowing the ministers, experts and the public to monitor outbreaks in granular detail across the country.

The move to water it down is part of No10’s official ‘living with Covid’ plan, which the PM unveiled yesterday.

After almost two years of on-off lockdowns, the PM revealed that all remaining legal restrictions will be lifted at midnight tomorrow.

The requirement to self-isolate for at least five days after testing positive for Covid is being dropped, and free testing — thought to cost ministers £2billion a month — will end on April 1 for all but the elderly and vulnerable.

The blueprint also sets out that the UKHSA, which runs the dashboard, will keep the content and frequency of Covid reporting ‘under close review’ and ensure statistics are shared with ‘the appropriate level of quality and transparency’. Whitehall sources have already claimed the daily figures may be ditched by April.

Experts told MailOnline today that cutting back on the daily data won’t make ‘much difference’ to interpreting the UK’s Covid situation.

But some scientists and MPs have publicly called for the Government to abandon the daily updates and pivot to releasing them every week, as is done for flu.

The move comes after Mr Johnson yesterday confirmed that the Office for National Statistics’ gold-standard Covid surveillance system would continue to operate. 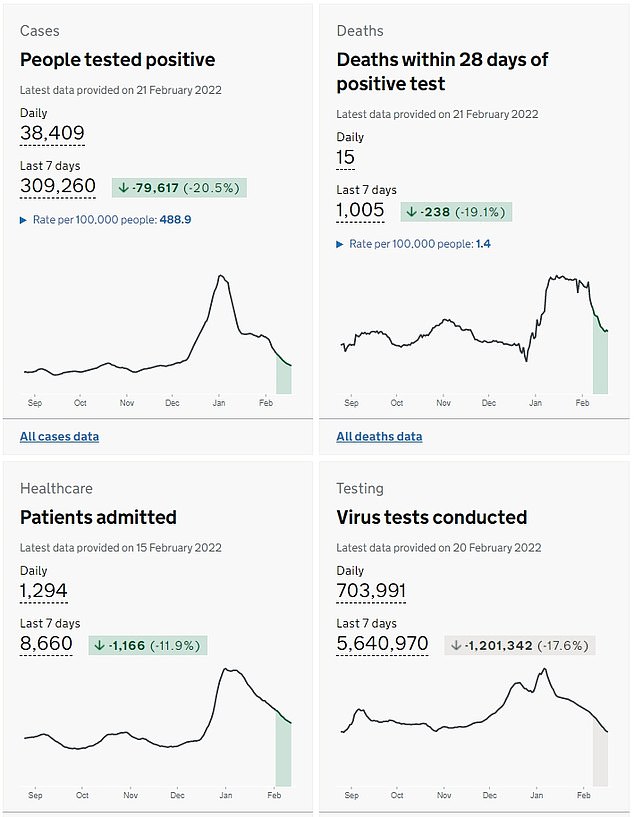 The Covid dashboard (pictured), which has been hailed as one of the best in the world, has so far been used seven-days a week throughout the pandemic to monitor outbreaks in granular detail across the country

The Covid dashboard has recorded 18.6million positive tests, more than 700,000 hospitalisations and 160,000 fatalities within 28 days of a positive test since the start of the pandemic.

The website, which is updated daily at 4pm, contains outbreak data from a UK-wide level down to figures for England’s nearly 7,000 regions.

But as the UK moves to treat the virus like the flu, which can kill 22,000 Britons in a bad year, critics have warned that the figures are ‘misleading’ and fuel an ‘unhealthy addition’ to the statistics.

There is a ‘strong possibility’ that Covid booster vaccines will be rolled out every year alongside flu shots, a Government vaccine adviser claimed today.

Approximately 8million elderly Britons and immunocompromised over-12s will be offered their second top-up jab this spring.

They will then be called in again in the autumn as part of a mass NHS booster programme, which could cover all over-50s.

Professor Adam Finn, who advises No10 on the roll out, today raised the prospect of an annual Covid jabbing drive, saying it was an ‘open question’.

The Joint Committee on Vaccination and Immunisation (JCVI) member told BBC Breakfast: ‘It’s hard to be absolutely sure about that, but the direction of discussion at the moment is certainly a booster campaign in the autumn, directed probably at the people who… we think are most at risk.

‘Whether that goes on year after year like the flu programme is still an open question and depends on what Covid does to us in the interim.

‘But it’s a strong possibility we may have a winter-time campaign, combined with the flu vaccine campaign, going forward.’

Until recently, the dashboard could signal an upcoming wave through a surge in cases.

But Britons will no longer be able to access free Covid tests from April 1, which is expected to slash the number of tests being performed from current levels of around 700,000 per day.

The dashboard also relies on people getting tested, meaning a drop or rise in cases can be artificial if it is due to fewer or more people getting swabbed.

And with high infection levels circulating in the population, official figures reveal the dashboard data inflates Covid hospitalisations and deaths, by including everyone who has tested positive in the last month.

This means people in hospital primarily for another condition and coincidentally test positive are included in the daily toll, even if they are not unwell from the virus.

NHS England shows fewer than half (46 per cent) of the 9,392 Covid patients in hospital last Tuesday were actually being treated primarily for the virus.

Some experts have called for the daily data to be scrapped, as the need to be vigilant to the virus has dropped since the milder Omicron strain emerged.

The milder nature has severed the once-impenetrable link between cases and hospitalisations and deaths.

There have been calls to instead publish Covid data weekly, as is done already for flu in the UK.

Professor Kevin McConway, an applied statistics expert at the Open University, told MailOnline he doesn’t think cutting weekend reporting from the dashboard will make ‘much difference’.

Fewer cases are already reported on Saturday and Sunday because people are less likely to come forward for a swab then, he said.

And death data is artificially suppressed on Saturdays and Sundays because not all hospitals report fatalities over the weekend, Professor McConway said.

He added: ‘I pay rather little attention to the figures for deaths and cases by report date anyway.

‘It makes much more sense in my view to look at the numbers classified by the date the person died or when they actually had the test done. 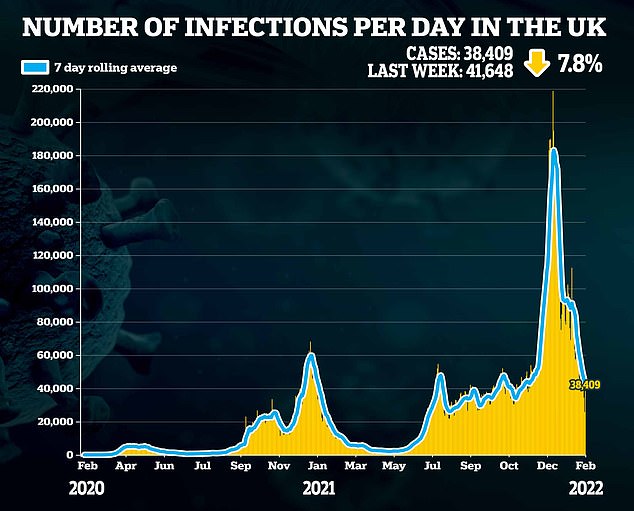 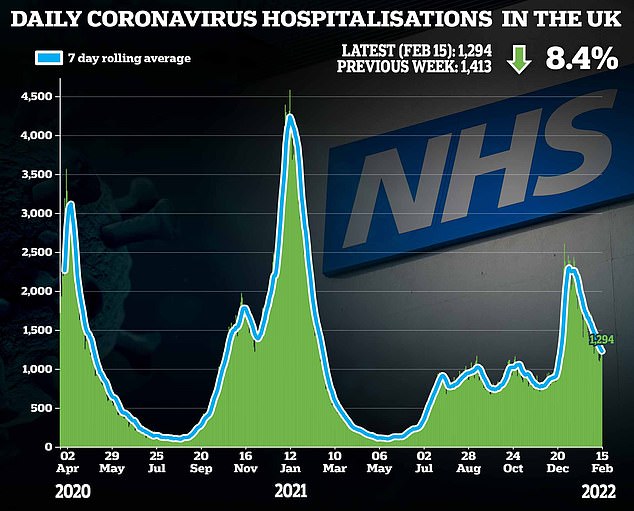 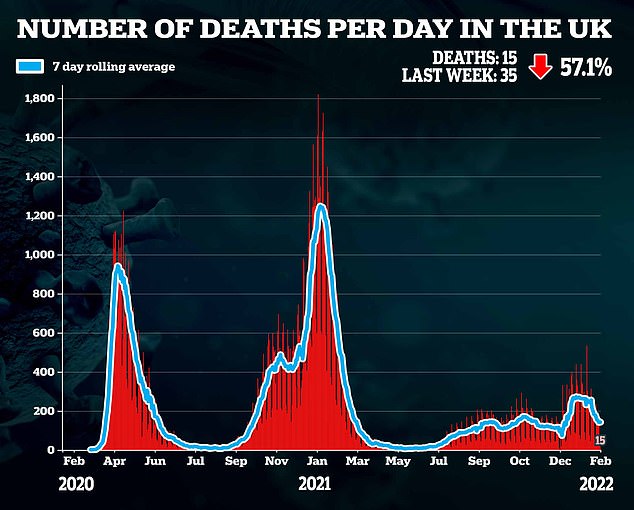 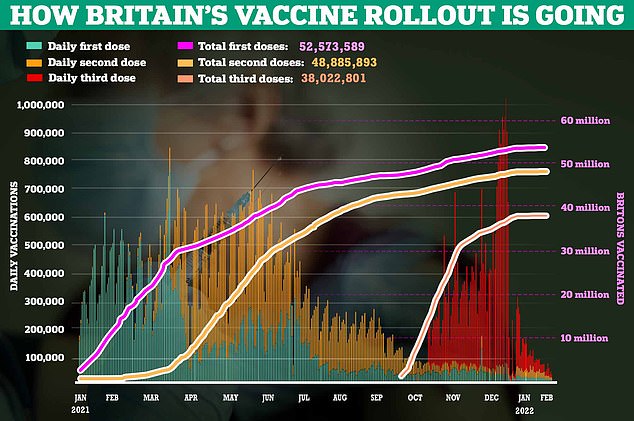 ‘The daily figures by the date they are reported were always rather awkward to interpret and looked much more up to date than they actually are.’

Ministers have heavily relied on the scheme, which randomly tests 100,000 people every fortnight to estimate UK-wide infection and antibody levels.

The ONS also sends some positive samples collected by the project onto labs to check for variants.

Mr Johnson told MPs the survey will continue tracking the virus ‘in granular detail’ and both its regional and age breakdowns will help spot surges ‘as and where they happen’.

The PM hinted that other studies would continue, saying we will ‘maintain our resilience to manage and respond to these risks’.

However, it is not clear exactly which other surveillance projects will be kept, or whether or not they will be watered down.