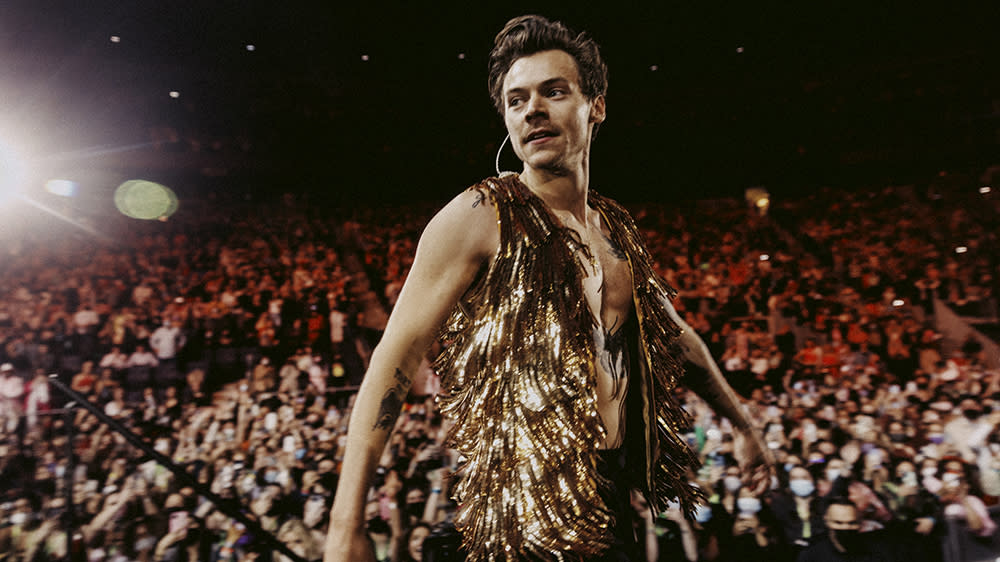 During his Sunday concert at London’s Wembley Stadium, Harry Styles caught the request of an enthusiastic Italian supporter who was holding up a sign that read: “From Ono to Wembley: Help me come out.” Happily obliging, Styles picked up the sign and a rainbow flag and did just that.

With the crowd chanting the fan’s name, Styles declared, “When this flag goes over my head, you are officially out. I think that’s how it works: When this sign goes over the head, you’re officially gay, my boy.”

He then ran across the massive stadium stage with the flag by his feet as his band built the anticipation further with a swirling drum beat. With his head thrown back and with the emblematic rainbow raised above his eye line, Styles shouted, “Congratulations, you’re a free man!” View the entire moment in the Twitter video below.

Styles’ old bandmate, Niall Horan, was also in attendance for Sunday’s Wembley show. Fans began uploading videos of the “Slow Hands” singer standing among the audience with a smile stretched across his face as he watched Styles perform One Direction’s debut single, “What Makes You Beautiful.”

This was night two of Styles’ pair of Wembley shows. The singer also performed on June 18 and took to Twitter after the concert to share his gratitude, saying it was “one of my favorite shows we’ve ever played,” a grand compliment coming from Styles, who last year played 42 sold-out arena shows.

Styles is also set to continue his “Love On Tour” through March of 2023, slated for 15 nights each in New York and Los Angeles with an additional five nights per city in Chicago and Austin.

Wembley, last night was one of my favourite shows we’ve ever played. I don’t know where to begin thanking you, I’m completely overwhelmed. I’m so grateful, I’m so happy. Thank you, thank you.
I love you all. See you later. H